1 Kommentare September 7, 2020by Thorben
Hey, guys! Just a heads up: The linked offer is already a bit older and the price of the gadget might have changed or it might not be available anymore.

Today the POCO X3 NFC was officially presented. The new mid-range POCO is being launched at an Early Bird price of $194.99 for the 6/64 GB. Sales for the Poco X3 NFC will start tomorrow. We have already received a device in advance and want to tell you about our first impression right away! 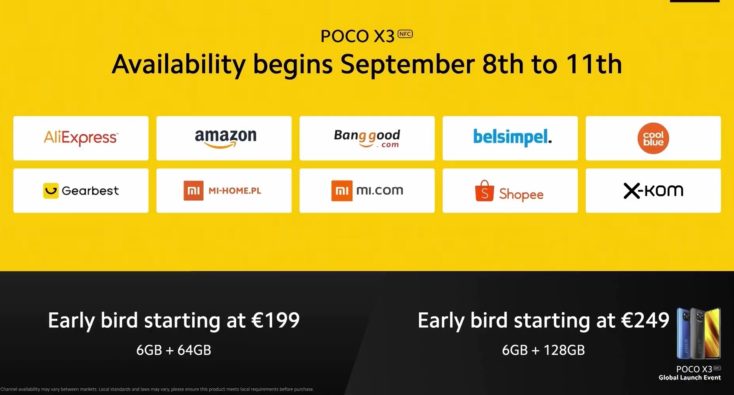 With the release of the POCO F2 Pro, the Xiaomi sub-brand POCO has made it clear where the journey is headed: there will be several POCO smartphones. While the Indian market was already being supplied with a POCO X2 and a POCO M2 Pro, things were quiet in Europe besides the flagship. But now there is the first middle class smartphone: the POCO X3 NFC. We have already received it from Xiaomi and sumed up our first impressions. 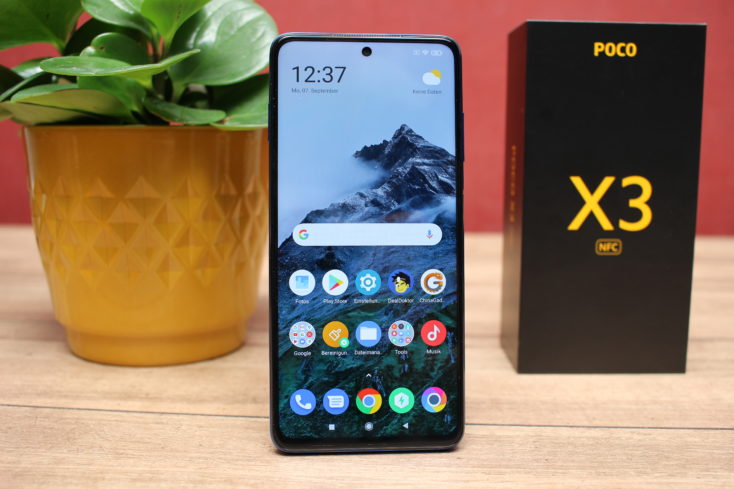 Fortunately, the POCO X3 NFC is a stand-alone smartphone and not a relabeled version of a Xiaomi smartphone. Nevertheless, the familiar 6.67-inch diagonal is used and the central punch hole is heavily influenced by the Redmi Note 9 Pro. So the front camera sits in the middle of the display and steals a few pixels from the Full HD+ display. The edges are not as slim as in the almost bezel free POCO F2 Pro. An IPS LCD display with a pixel density of 395 ppi and a brightness of 450 nit is used, which is an average sharp and bright display. It is protected by Gorilla Glass 5, and since it is an IPS panel, the fingerprint sensor moves to the side. For my taste it could react a bit faster. 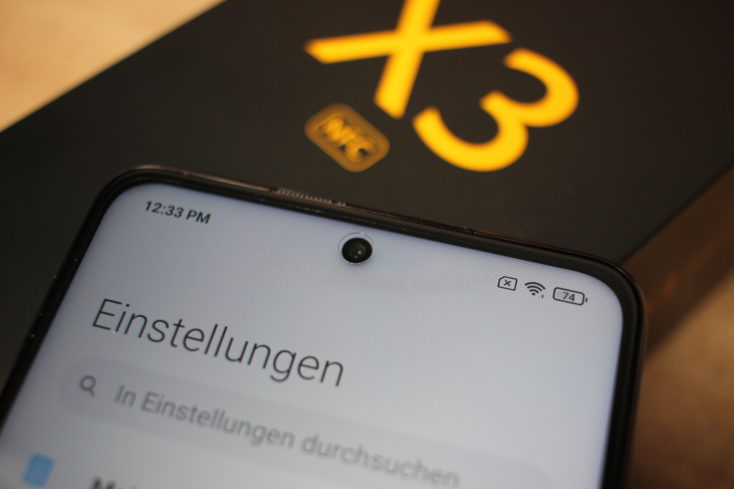 However, POCO gives the X3 NFC a 120 Hz refresh rate and a 240 Hz touch sample rate. This makes the refresh rate as high as in the Xiaomi Mi 10 Ultra, but POCO does not have an AMOLED panel. Due to the higher refresh rate (“normal” is 60 Hz), everything should be displayed a bit more fluid and faster. This also applies to the Poco X3 NFC. If you switch back to 60 Hz once, you will definitely notice the difference. This gnaws a bit at the battery life, but the speed is absolutely worth it in my eyes. Inputs are converted even faster and scrolling & swiping is more fluid. In my opinion the effect is not as strong as with a 120 Hz AMOLED panel. The bottom line is that the POCO X3 NFC is the cheapest 120 Hz Smartphone at the moment. 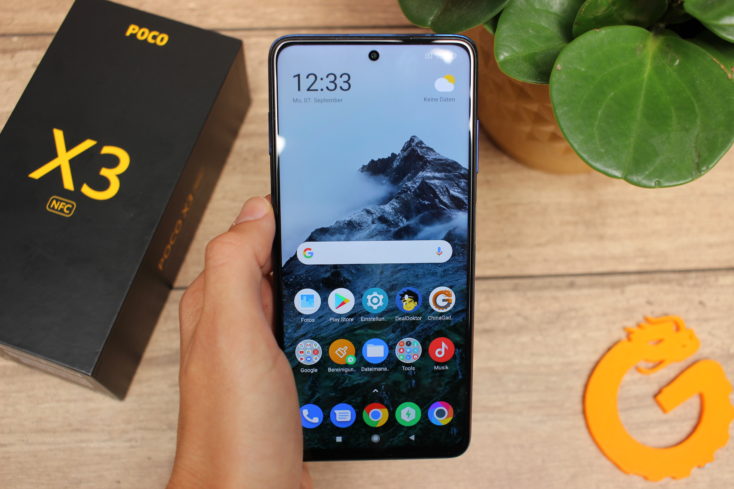 On the backside, POCO decided on a bold placement of the POCO lettering. The smartphone is available in black and blue, the backside is made from plastic. In my opinion, the same also applies to the housing frame, even though the data sheet refers to a metal housing frame. The POCO X3 NFC even has an IP53 rating, which means it is protected against spray water. From a purely visual point of view, I don’t like the centrally positioned camera module, even though the reference to a classic digital camera is quite cool. But the camera module stands out relatively far. 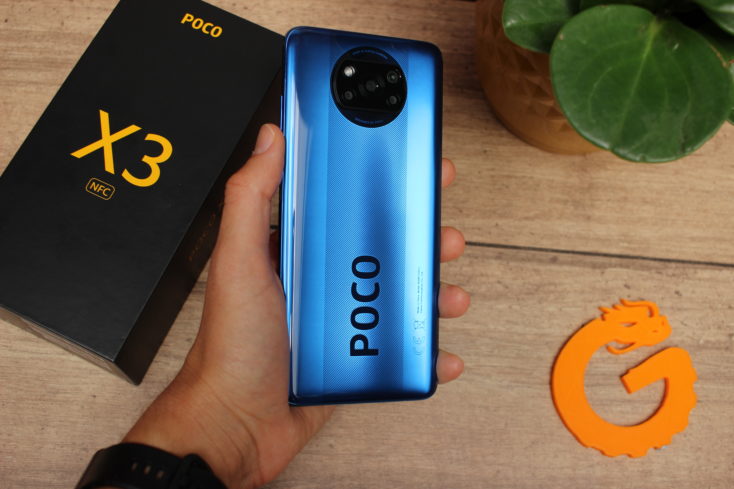 The POCO X3 NFC is the first smartphone with the new Qualcomm Snapdragon 732G processor, a revised version of the Snapdragon 730G, which is included in the Mi Note 10 Lite. The Octa-Core CPU clocks at 2.3 GHz and is paired by Xiaomi with 6 GB LPDDR4X memory. For the internal memory you have the choice between 64 or 128 GB UFS 2.1 mass storage. But you can expand the memory with a microSD card, so you don’t necessarily have to get the larger version. The POCO X3 NFC is cooled by LiquidCool 1.0 Plus technology. Especially in combination with the 120 Hz display, this results in a remarkable performance that is sufficient for all everyday applications, but also for more demanding games. After all, it is the strongest 4G processor in Qualcomm’s lineup.

A highlight of the POCO X3 NFC is above all the large battery. An impressive 5,160 mAh battery capacity is hidden in the 9.4 mm thick smartphone. This is currently the second largest battery in a Xiaomi smartphone, only the Mi Note 10 and Mi Note 10 Lite offer 100 mAh more. The capacity should be sufficient for at least 1.5 days, with moderate use two days should also be possible. Wirelessly it cannot be loaded, but cable bound with 33W thanks to the provided battery charger. This is of course done via a USB-C port. Next to it there is a 3.5 mm jack connector.

As the name suggests, the POCO X3 NFC is equipped with NFC. We’re not sure why it’s explicitly stated in the name. In addition, there are WiFi 5, Bluetooth 5.1 as well as LTE Band 20 and LTE Band 28. AS a hybrid SIM slot is installed here, either two nano SIM cards or a nano SIM and a microSD card can be inserted.

The addressed camera module consists of a total of four sensors and an LED flash. The main sensor is the Sony IMX682 sensor with 64 megapixel resolution and a ƒ/1.89 aperture. This is a “slimmed down” version of the Sony IMX686, which is used in the POCO F2 Pro. The same has been done with the Mi 9T and Mi 9T Pro, so there should not be a significant difference. There is a 13 Megapixel ultra-wide angle camera with ƒ/2.2 aperture as well as a 2 MP macro sensor and a 2 MP depth camera. On the front there is a 20 MP camera. 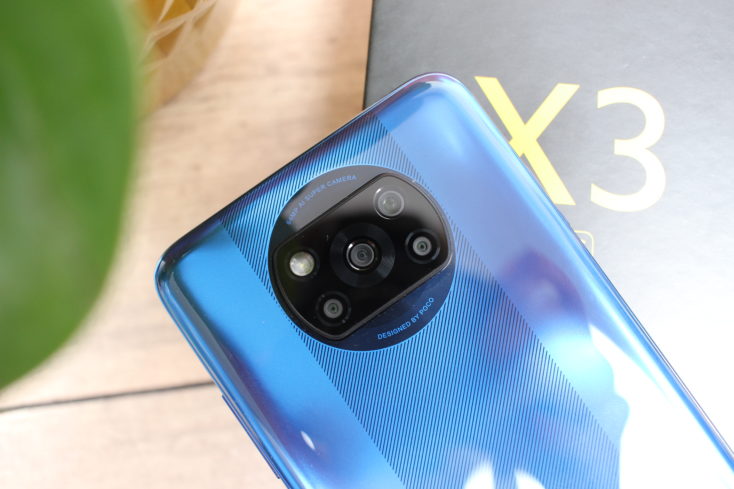 Since we only had the phone here for a short time, we could only take a few snapshots. But we like them at first sight, and they are actually hardly distinguishable from the results of the POCO F2 Pro. Especially the rich, but not over saturated color profile appeals to me, as does the sharpness, which is on a good level despite pixel binning. The ultra-wide angle camera gives fewer details, but here it’s more about the popular fish eye look. I’m personally a bit disappointed by the two 2 MP sensors, because they hardly offer any added value, but apparently should not be missing in a current smartphone. 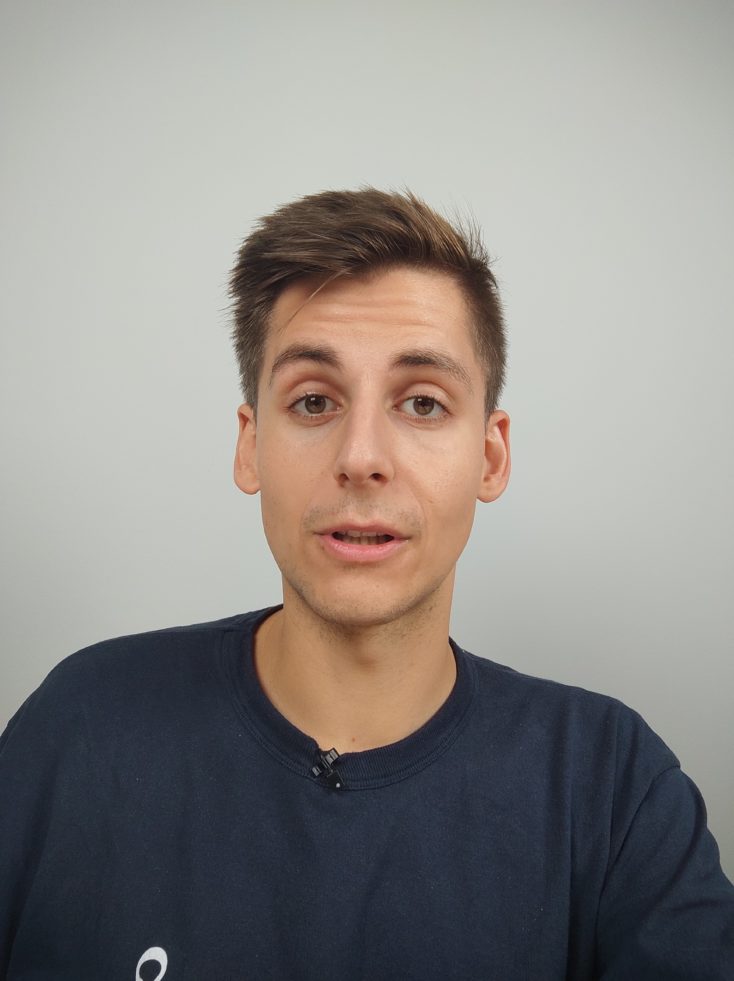 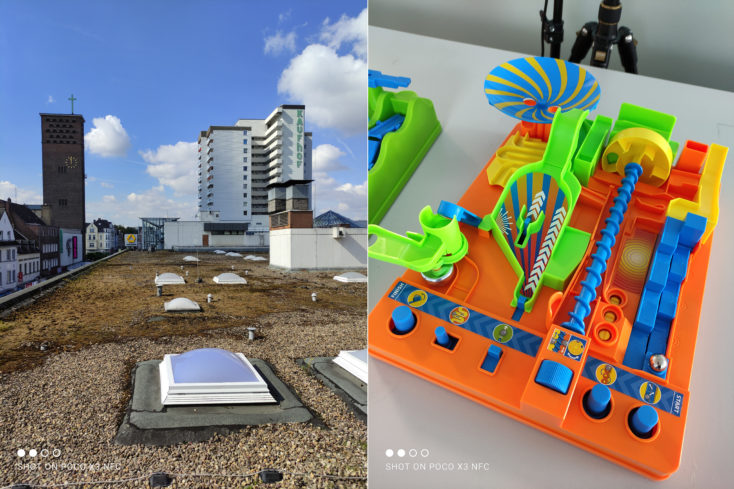 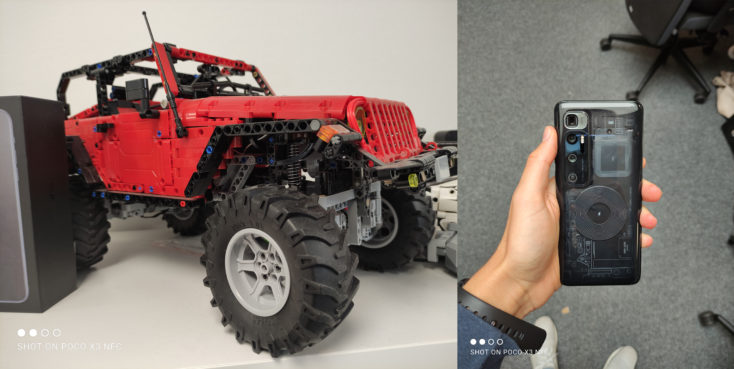 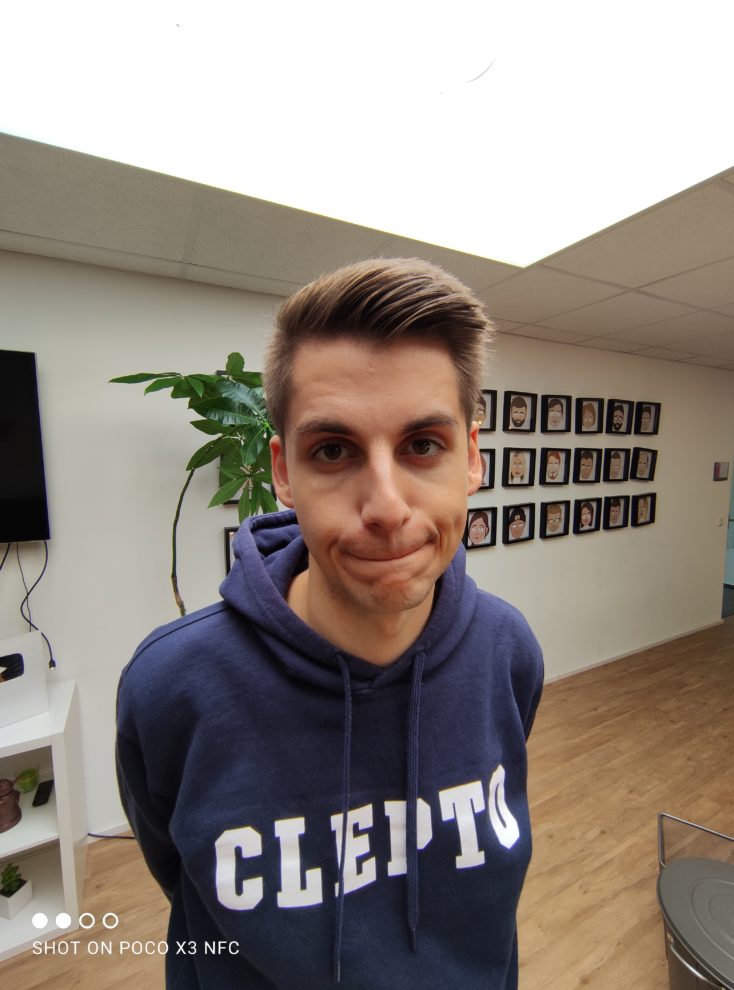 At first I thought I had the wrong smartphone in my hand, because the icon package of the POCO Launcher was apparently reworked for the X3. Many app icons, such as those of the camera or compass, have been changed, and are now much more colorful and saturated. I like it quite well, but it took some time to get used to. Surprisingly, it is no longer possible to sort the apps in the launcher by color. This is due to Xiaomi’s MIUI 12 operating system and Android 10, which is up to date thanks to a security patch from August. 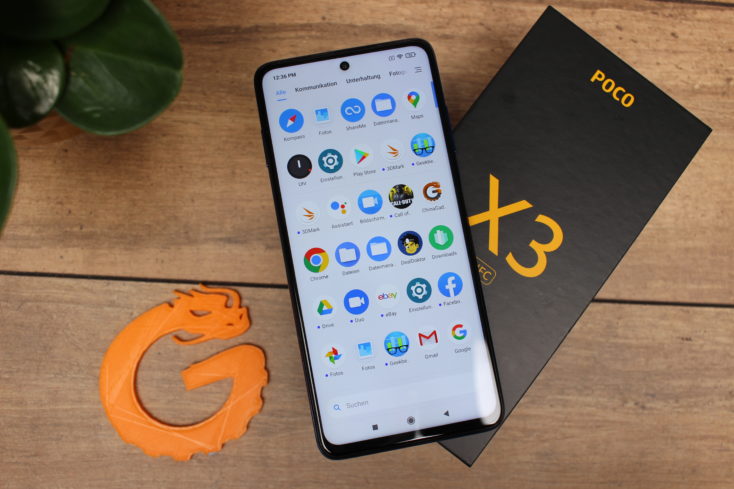 Unfortunately there is also some bloatware on the POCO X3 NFC. While it is understandable that their own apps such as Mi Browser, Share Me or Mi Video are pushed, third-party apps such as eBay, Netflix, LinkedIn or WPS Office leave a bland aftertaste. Fortunately, these can be easily uninstalled.

The POCO X3 NFC was a really good surprise. Especially at the starting price, you get a lot of hardware, typical for POCO: New processor, 64 MP main camera, a 120 Hz display and 5.160 mAh for the starting price of $199? Great! Of course you also want to attract the attention of the mainstream audience and you have to keep in mind that it is an IPS and not an AMOLED. Nevertheless, the bottom line is that after the first use I am very positively impressed. If the prices settle down in the long run, we will surely have the best smartphone in the range of $200.

But we will of course add long-term experiences to the article to see how it performs in everyday life. What do you think of the middle class POCO smartphone?