Poputar: The smart guitar (app, LEDs & tools) for $279 in crowdfunding

No comments November 15, 2020by Kristian

“Nice!”, I thought when I received a newsletter as a long time user of the Populele, in which I was written: There is now the same principle as a guitar. After the test of the Populele by Jens and Julian three years ago I ” swiped” the Populele (in the meantime there is a second version available) and in quiet minutes I practice playing the Okulele at home. In combination with my iPad, which I put on a table – a really cool combination. Often I wished for the same principle as a guitar – I was heard. 😉 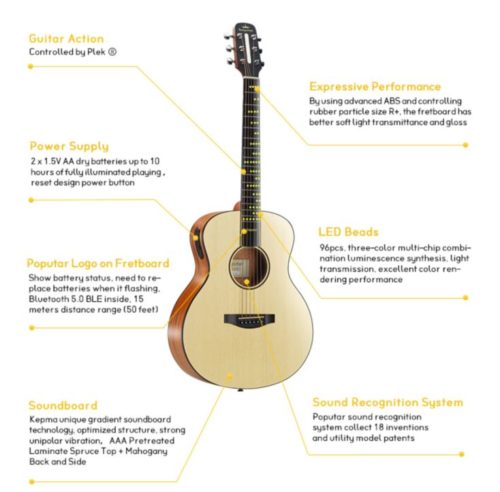 I feel like the only one in the CG editorial office who is celebrating the China gadget sooo much (many are just playing around with the FlyNova Pro again :D), but as a former guitar amateur and in the current Corona situation, the smart guitar is really opening doors for me. I’ve wanted to start playing the guitar again for a long time, but I also know: It’s not that easy.

The principle of the Poputar (do you think the name is a Bollywood movie?!!) is simple: The guitar connects to the app (for iOS and Android) via Bluetooth (5.0 BLE) and together the guitar can be tuned (okay, other apps can do this, too).

The killer, however, is the training: You learn different chords or the necessary fingerings in different levels of difficulty by means of 120 LEDs built into the fretboard.

From my own experience with the Populele I can say: the learning progress is many times faster. Gone are the times when you have to look twice and three times in the book or the app to check if you hit the right chords.

Furthermore the app automatically registers if you hit the right chord and rewards you with points for easy songs in the beginning and later for more difficult ones. I’m actually not sooo a fan of “gamification apps”, but it’s really fun. You can get a nice overview of the built-in components in this YouTube video:

The acoustic guitar can also be taken on stage – a pickup is built in. The partnership with Kepma has been confirmed since March 2020 and delivery is scheduled for this year. Just have a look at the crowdfunding campaign on Indiegogo – it is really described in great detail.

Assessment: for whom is the Poputar?

The acoustic guitar can also be taken on stage – a pickup is built in. The partnership with Kepma has been confirmed since March 2020 and delivery is scheduled for this year. Just have a look at the crowdfunding campaign on Indiegogo – it is really described in great detail.
Assessment: for whom is the Poputar?

But the real added value is the “smart stuff” anyway. I really celebrate the Populele very much. You can be very focused, you can practice the grips or changes over and over again and you don’t have to look at the app for that. If you can hit the chords halfway solidly, the app with all its songs and the analysis or gamification factor offers a real added value. Of course there are also YT tutorials, apps or, like me 20 years ago, books, but it just never works that elegantly.

Conclusion: I have to save and then order 🙂