0 Kommentare May 28, 2021by Jens
Hey, guys! Just a heads up: The linked offer is already a bit older and the price of the gadget might have changed or it might not be available anymore.

The Powkiddy A66 is a small handheld console with a color display, various emulators and thousands of pre-installed retro games. Especially the small size, with which it almost fits in the wallet, makes it interesting. Whether you can have fun with it, we tried out ourselves. 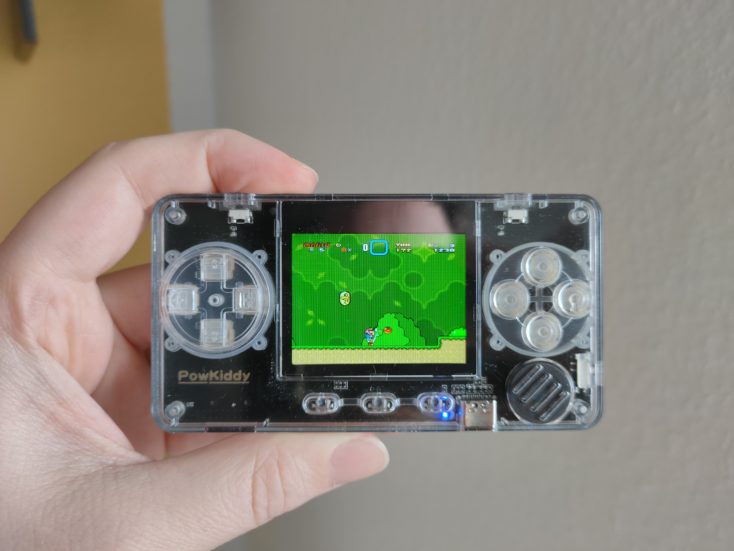 At first, there is nothing special to discover about the basic design. Almost all consoles, whether Powkiddy, Anbernic or whatever they are all called, rely on the central display with a control pad on the left and buttons on the right. However, the A66 comes with the chic combination of a transparent front and silver back. The latter feels like brushed metal, but is probably just plastic. Either way, I like the look. 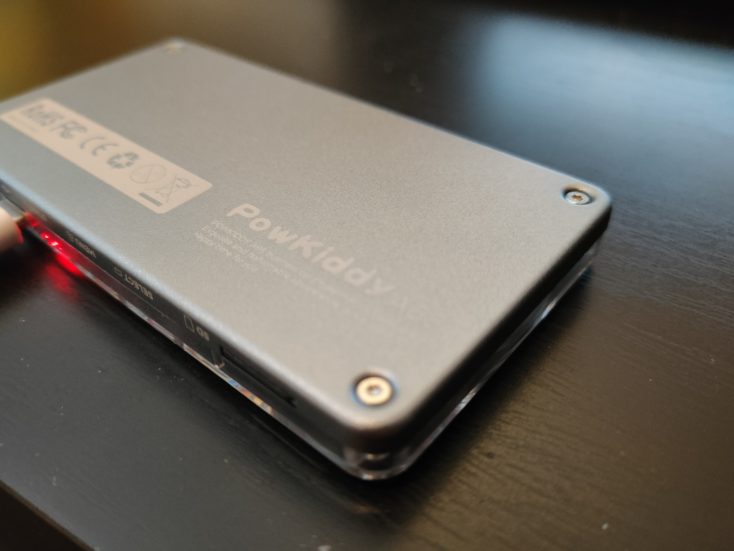 Besides that, the console is comparatively small. Well, none of the comparable devices is huge, but at just under 10.5 x 5.5 cm, the A66 is perhaps the smallest. Strictly speaking, it is only 2 cm longer than a credit card and just as wide. The thickness is 9 mm, with the protruding buttons just under 1 cm.

All this has the advantage that the console easily fits into any pocket. It has rarely been so easy to take it with you to play for a few minutes on the platform, in the waiting room or on the bus. However, the format automatically brings the disadvantage that everything is smaller and possibly not quite as easy to reach. The buttons are about smaller than those of the classic Gameboy, my thumbs almost completely cover both controls.

Nevertheless, the buttons can all be reached easily, but the hands can get cramped during longer games. The ergonomic design of current console controllers is far away. I still have one small point of criticism: The keys could be quieter, you hear a clear clacking noise with every press. Some people might like that, but it can be annoying, especially during fast inputs.

Besides the directional pad and the obligatory A/B/X/Y, there are Start/Select and a menu button as well as two really very small shoulder buttons. The microSD slot for the SD card with the ROMs and a USB-C port are found on the bottom. That’s right, no more outdated micro-USB.

A few emulators and way too many ROMs

Just a hint: You can of course delete or reinstall ROMs – even quite easily. So you could skip the following paragraphs, in which I talk extensively about the pointlessness of the included flood of games. Or you could continue reading and shake your head with me.

There are no less than 5,280 different ROMs pre-installed. Most of them are for the Gameboy (2,700) and the Mega Drive (1,588). The whole thing has the following problems. First of all, some ROMs are available multiple times, for example because there are different versions with different languages. And while we are on the subject of languages: A large part of the ROMs is in Chinese or Japanese, so completely unusable for most. Of the 85 ROMs in the “GBA” folder, only one is in English (don’t even think about other languages).

And last but not least, many of the games are simply uninteresting or just bad. A Japanese dating simulation in 8-bit or a completely text-based quiz in Chinese? Or the sixty-third Mario clone where a cat or a little boy jumps over dragons and flowers? Who needs all that?

So take all of that (duplicate and triplicate, boring and completely uninteresting games in languages you don’t speak) and put two and a half thousand of them into a list that you can scroll through in increments of one or five in (not always) alphabetical order. This can quickly become frustrating.

The right games and all of a sudden you have fun

Sure, a few of the ROMs are well-known and popular titles. If you look, you’ll find classics like Contra or Turtles; Mario and Donkey Kong are also represented in various titles, of course. Street Fighter, Bomberman, Dragon Quest – you name it, it’s all here. And many others, which I don’t know at all, but with which some others connect their first gamer memories. My tip, however, is still: Throw most of it out first.

Fortunately, you can easily clean up the ROMs. Connect the SD card to your Windows PC and simply go to the corresponding folders. Delete everything you are not interested in or can’t read. And then take your own ROMs that you have as backup copies of your own games and put them on here. Once you’ve done that, you select “Refresh ROMs” from the console menu, and the list is updated. With 10-20 games, such a folder is then suddenly much clearer than with 300. You can always reinstall.

I actually pulled out some of my old games and put the respective ROMs on the device. Felt like a trip down memory lane. You have to give the Gameboy credit for still working perfectly after more than 25 years. However, I still prefer the bright display of the A66 to it today. It’s hard to believe that we had to get by without illuminated displays back then. That’s why you can hardly recognize anything on the Gameboy displays in the photos 🙂 .

The other emulators already installed and their names in the menu are:

The emulators and almost all ROMs I tested work without problems. Small restriction: with a few GBA games there are occasional stutters.

I also have to exclude the Playstation emulator, which didn’t work at all. All games I tried got stuck in the “Booting up…” screen, and the hardware is probably not strong enough to display the games properly. To be honest, I don’t need 3D on the small display either, so I can get over that. The PS folder is the only one that is empty, so it comes without any pre-installed ROMs.

As a kid who grew up with SNES and Game Boy, these are my preferred systems. For older games, such as all the Sega consoles (who is this Sonic guy anyway?), I have few nostalgic feelings left over. And as someone who has always been Team Nintendo, I also prefer a Game Boy Advance to a Playstation. As a result, I’m always a bit biased when it comes to these handhelds. Old Sega fans should get their money’s worth here, too, though 😉 …

What else is important

So if you then have the games that you also like to play, then the console is really fun. The screen is small, but very bright and colorful (assuming games with color). The sound is not unpleasant, the single speaker does a good job of reproducing the beeping 8 bit sounds. The sound can be adjusted in 20 levels in the menu. However, there is no headphone jack – probably due to the size of the device.

The menu is very pleasant to use, even if there could be a few less items. Besides “Retrogame”, where you can find all emulators, there is also “Game”, which simply contains three mini-games. How to save games under “Favorite” wasn’t really clear to me. Under “Playlist”, however, you are shown the last started titles, which still allows easy access to your favorite titles. Brightness and sound can be adjusted in the settings.

The built-in battery provides up to 3.5 hours of battery life. Not a bad value for such a small device, but the time goes by faster than you think. At least have a USB-C cable handy for charging if you want to play with it on a longer train ride, for example.

You usually buy a console like this because you want to reminisce. Here and there you can play one of your old classics and favorite games, even if it’s only for 20 minutes. The small console is more or less perfect for that. The few times I was on the road in the past few weeks, I always had the PowKiddy A66 with me and always played a round in between.

The fact that the console is so small is the biggest plus point for me in this case. I generally like consoles like this, but when do you ever pack them if you don’t have an extra bag with you. However, I currently just have the PowKiddy A66 in my jacket pocket, where it doesn’t bother me at all, and so in the meantime I’ve already made decent progress in Pokemon Red over the past few weeks.

Only those who really want a larger display and better haptics should buy a larger device. However, those who prefer the compact design will not go wrong for the price.