0 Kommentare November 2, 2021by Henning
Hey, guys! Just a heads up: The linked offer is already a bit older and the price of the gadget might have changed or it might not be available anymore.

Powkiddy has become a well-known name in the retro console market. With the Powkiddy Max2, they are now launching another model with a large 5-inch screen. 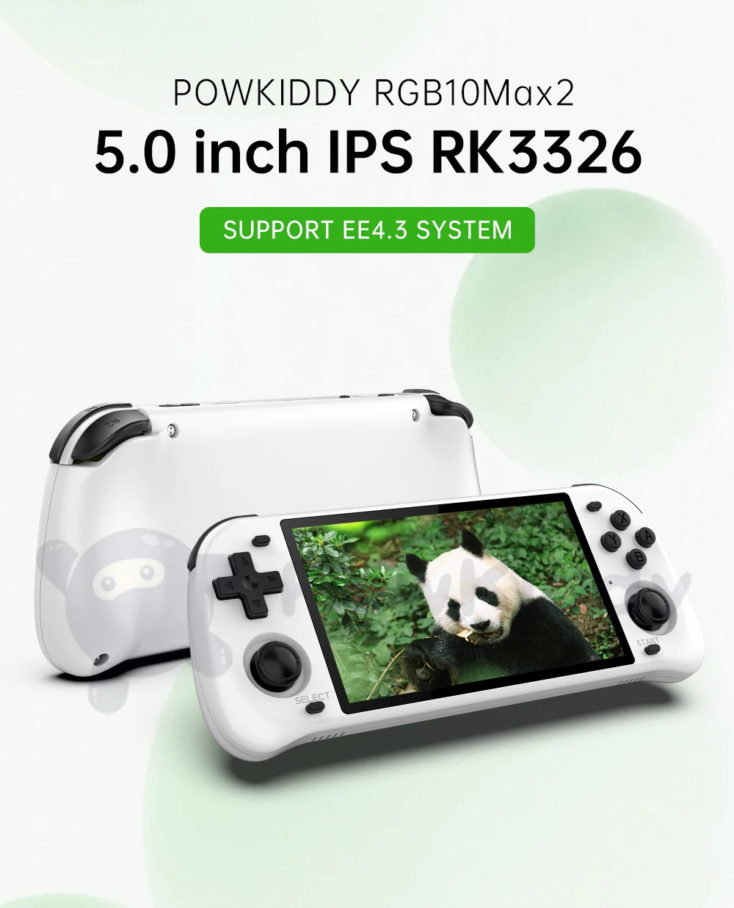 We know the basic design of the console from many other models, but in principle there are also only the variants “Gameboy” or “Gameboy Advance”. This is the latter with the display in the center and the buttons on the left and right. The grips are ergonomically shaped, which means they are simply slightly curved and rounded to make it easier to hold in the hands.

In terms of buttons, there is the usual fare; it is perhaps worth mentioning that there are two pairs of shoulder buttons. On the top, we find a WiFi button, a headphone jack, an SD card slot and two USB-C ports in addition to the power button and volume buttons. The console is available in three colors (black, white, pink).

A RK3326 quad-core processor with 1.5 GHz takes care of the performance, and there is also 1GB of DDR3 RAM. The processor is also used in other retro consoles and is no performance miracle, but is supposed to support games from the N64 and PS1 console generation.

The console does not have its own memory, but SD cards with up to 256 GB are supported. The battery with a capacity of 4,200 mAh is supposed to last up to 8 hours and recharge in 2.5 hours.

Emulators and such “retro consoles”, which are primarily intended for this purpose, continue to enjoy popularity. In times when Nintendo again makes negative headlines with the controversial price increase for their online service (including retro titles), this will certainly not change as soon as.

Presumably, many emulators and games are pre-installed here again, as usual. Exact details about this are missing so far, but it more or less doesn’t matter, since it’s better to install the ROMs of your own favorite titles yourself anyway. Nobody needs 5,000 ROMs on such a console.

The Powkiddy Max2 is available for around $125 from AliExpress, for example. Especially the comparatively large screen should be interesting for many, while the same processor can also be found in cheaper devices like the Anbernic 351.