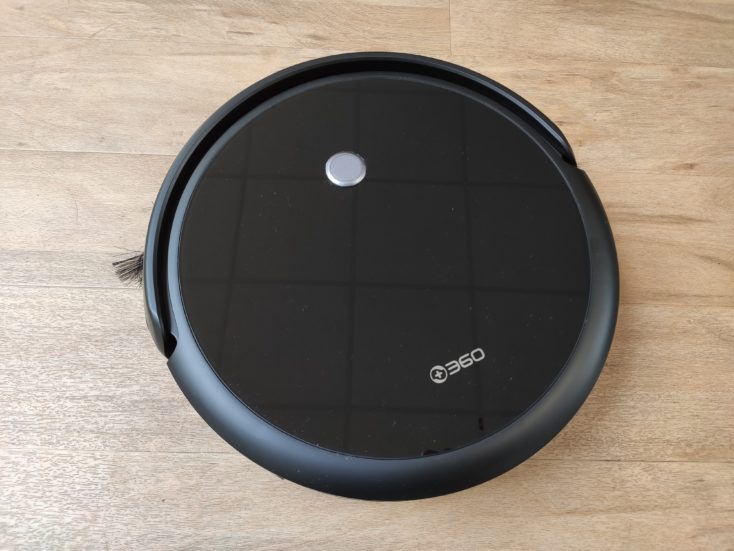 Apart from the robot itself, it comes in a standard brown cardboard box:

The small household helper is not really expensive, so you can’t expect the abundance of accessories and spare parts to be included. The included remote control with batteries is nice to have, so you can use the robot without an app. But some functions are missing of course, like mapping and area cleaning.

Unfortunately, the remote control is not as visually appealing as the 360 S6 Pro. The one of the C50 strongly reminds of a TV remote control from the 90s, which was made of not so chic plastic. Even with batteries, it weighs only a few grams. Since the manual is also very well translated, I’ll spare myself the listing with the key assignment and refer to it here.

Like Xiaomi with its own sales and crowdfunding platform “Xiaomiyoupin”, Qihoo also has its own store. The parallels to Youpin are obvious, so products from other manufacturers are also sold here (Midea, Dyson, Phillips…). Unfortunately, you can only order here if you are a Chinese resident. For us in this country, the China store GearBest is the first port of call for the 360 models.

The 360 C50 is the only model from the manufacturer that appeared on the market without LDS. Due to the missing LDS tower on the top and the small width of 31.5 cm the C50 is a candidate for narrow areas and can work under many pieces of furniture. Especially the low height of 7.9 cm (3,11 in) is a challenge to other manufacturers, for example the Dreame F9 is exactly 8.0 cm.

Although navigation via laser space measurement is the current non plus ultra, the robots also reach heights above 9 cm. If you are wondering, like me, when the first vacuum robot with an extendable laser tower will arrive, you will have to be patient. 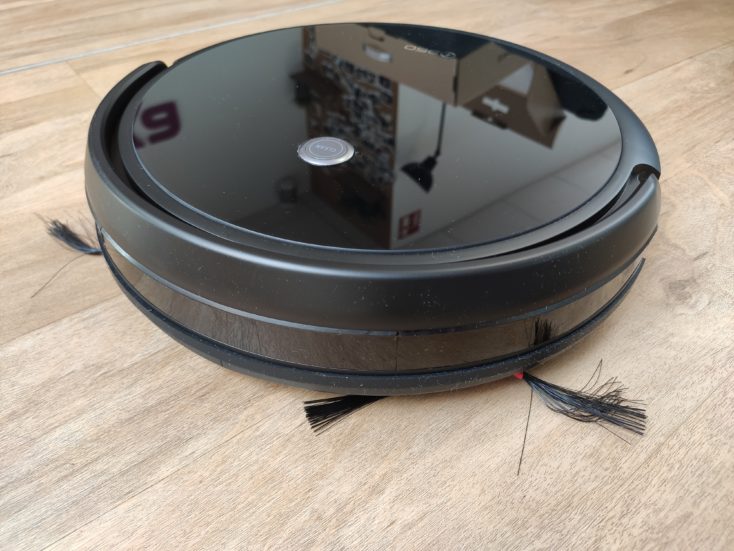 The low weight of 2.1 kg is unfortunately also due to the fact that Qihoo 360 has – unlike the previous models – made considerable savings in material. Of course, the low price has to come about somehow. At the end of the day it’s not the absolute knockout criterion, after all, he’s supposed to work first and foremost and always gets a bit dirty, but we’re used to better things from the manufacturer. At least there is a CE-mark on the bottom side.

Apart from the smaller dimensions, the criterion “design and workmanship” clearly goes to the Dreame F9. This one is a bit more expensive, but it is made of 70% better material and much more chic.

In the app 360Robot (Android, iOS) we already know, everything is well translated into, for example, German. Many of the functions and settings of the larger models are also implemented in the interface of the C50.

After registration via (disposable) mail address or cell phone number (not really recommended from a privacy point of view), the robot has to be integrated into the WLAN. The following steps have to be taken to integrate the robot:

Then just wait a few seconds and the robot in the app is ready for use.

Settings and functions within the app

The app control offers the following setting options and functions:

Even if this list seems long at first sight, the range of functions is manageable.

The 360 C50 makes up for the lack of laser space measurement by moving through the four walls in straight paths, i.e. according to the Zigzag principle. It does not leave out any area and, thanks to the SLAM (Simultaneous Localization and Mapping) algorithm implemented, it is also able to create a visual map of the rooms. This map is displayed in the app. This allows us to see where the robot is at any given moment, even while on the road.

Qihoo 360 has saved on building materials, but not on suction power: at the highest level, a whopping 2600 pa is more than sufficient for most household challenges. For comparison: The brand new Roborock S6 MaxV has 2500 pa suction power. The individual suction stages (in ascending order) with suction power and operating volume:

All loudness values were measured with a sound level meter at the loudest point (the fan).

Unfortunately, the 360 models can so far only be commanded via complicated detours using Alexa voice control or Google Assistant. In China or the USA this is also possible without detours.

Yes, despite its low price, the C50 can also wipe. This is made possible by replacing the 0.5 l dust chamber “at the rear” of the robot with the 0.3 l water tank with attached microfiber cloth. Then put water into it, attach it to the underside, done.

Following a wet rag is not an adequate compensation for manual wiping with mop and muscle power. Since this is an electric water tank, the amount of water that drips from the tank onto the cloth can be adjusted in the app. The wiping function can be regulated in three stages, i.e. low, medium and high water flow rate.

Especially flat models are very popular so that you can have autonomous vacuuming under the bed, sofa or other pieces of furniture. Raising furniture does not seem to be an option too often. That’s probably what Qihoo 360 thought, after all, the manufacturer is quite capable of producing really strong LDS vacuum robots.

So far I tested every available model of the manufacturer and almost always came to the conclusion: price-performance is top. From my point of view, Qihoo 360 is a company in the vacuum robot sector that receives far too little attention. The C50 doesn’t look like much and doesn’t necessarily have a lot to offer in terms of functionality. High suction power is not always everything when navigation and processing don’t play along.

But the total package is of course not comparable with the top models. Personally I stamp the 360 C50 as a “good try” of the manufacturer, but I think that the model will be forgotten soon. Especially because Dreame has the F9, the flat model of the hour, in their assortment.

What do you associate with the Qihoo 360 brand?