0 Kommentare February 22, 2018 by Maike
Hey, guys! Just a heads up: The linked offer is already a bit older and the price of the gadget might have changed or it might not be available anymore.
With this quadcopter drone you can even go outside with foul weather: The JJRC H31 is water resistant and survives even a submerge without consequences. That sounds quite nice. Of course the idea is not new and the H2O Aviax from GPToys is also a water-proof quadrocopter. Splashes and rain did not matter but after the Aviax landed in the water it did not work like before. Without knowing more, we assume that it should be similar this time. Strictly speaking, this model already existed. A user had sent it a while ago. Now the H31 is cheaper again (and without EUSt), so we dedicate to write a seperate article.

Our conclusion is that the lack of buoyancy is not a big deficit. The biggest advantage in our eyes is that rain or wetness is generally not a problem and you do not have to be careful. Which skills the quadrocopter also have complied TomTop in this very creative video.

You might think they just want to destroy him with all their might. In addition to the “water-resistant” rating, the JJRC H31 still dominates some other flight maneuvers. The 400mAh battery is supposed to last for an 8 minute flight time, with a range of up to 80m. 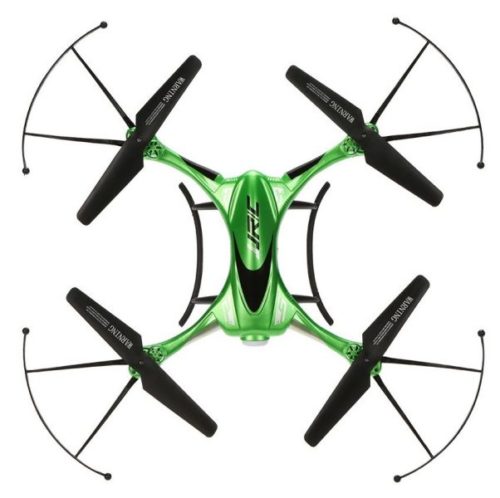 Visually, he remembers as an insect which is up to the thin arms and the green colour. Alternatively, you can order it in white. The necessary accessories are as always included in the package, beside the remote control and rechargeable battery there are charging cable, screwdrivers and spare parts.

We think that the idea of ​​the water-resistant quadrocopter is quite nice and since the price is pleasantly low, you can give it a go.