0 Kommentare June 18, 2022by Jens
Hey, guys! Just a heads up: The linked offer is already a bit older and the price of the gadget might have changed or it might not be available anymore.

The Rainbow Stepper is a kind of mechanical marble run, an escalator for small plastic balls. Here the focus is not the design of the model but the mechanics, then the set is fully motorized and transports balls or marbles up a ramp. 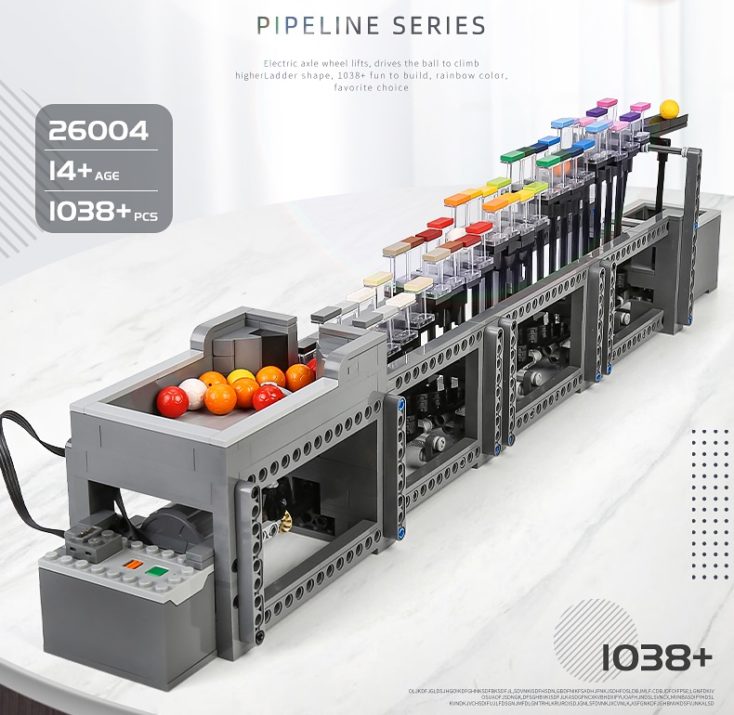 I like such sets. Sure, I also grew up with police station and pirate ship, and built as a child mainly cars and spaceships. But sports cars made out of sticking bricks there are many. A set that focuses on movement and functionality is something special.

The model is basically explained quickly. Colorful balls are moved up a ramp via a series of platforms that move up and down. An electric motor provides the movement. Why the balls roll “uphill” is due to the individual platforms. The top stone on each of the 22 platforms is a small ramp. The ball rolls onto the step, is carried upwards by the motor and rolls forward onto the next step, which then moves up again a little further. In the video you can see how this works exactly. It’s kind of reassuring to see the mechanism moving so smoothly.

At the top of the stairs, the balls then roll down a short chute and then fall into a collection bin. Of course, you could also build a second staircase or another track for the balls directly behind it. With four of these sets you could theoretically create a variant of the Penrose staircase, in which the balls roll endlessly uphill. Well, four sets might be a bit too expensive.

However, it should be relatively easy to create a track from the upper end, which runs parallel to the staircase back to the beginning. This way, an endless circuit can be built with only one set. 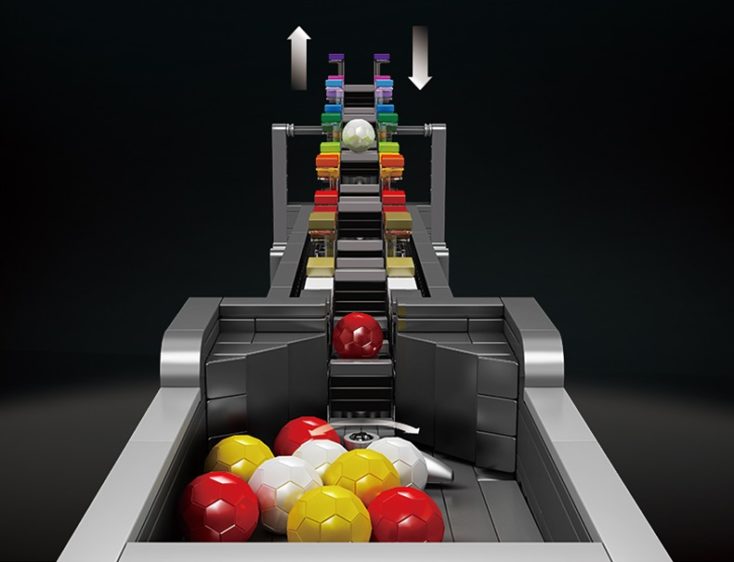 The set consists of 1,038 bricks, most of which are different shades of gray. The colorful bricks on each step, which also give the set its name Rainbow Stepper, are an eye-catcher. When fully assembled, the model is 58.5 cm long, 9.5 cm wide and 16.2 cm high at the highest point. The balls in different colors should also be included in the set, but nowhere does it say how many you get. Of course, other balls or marbles, for example, can be used; the only limitation is their size, because they still have to fit between the individual steps.

This is a set that is not so much aimed at collectors of large showpieces, but rather hobbyists who enjoy moving parts and electric motors in their sets. Of course, it’s also a great set for kids; they’re among the most excited about the “marble run” and, in the best case, learn something along the way.

For more fancy terminal block sets have a look at our themed world of terminal blocks. For example, I can highly recommend the mechanical solar system from CaDA.