0 Kommentare July 9, 2021by Jens
Hey, guys! Just a heads up: The linked offer is already a bit older and the price of the gadget might have changed or it might not be available anymore.

The JJ-01 is a kit made of metal, plastic and electronic parts and is remotely controllable after assembly. What makes it special are its Mecanum tires, with which it can also drive sideways (“strafing”) and the “cannon” that shoots small plastic balls at the push of a button. We built it. 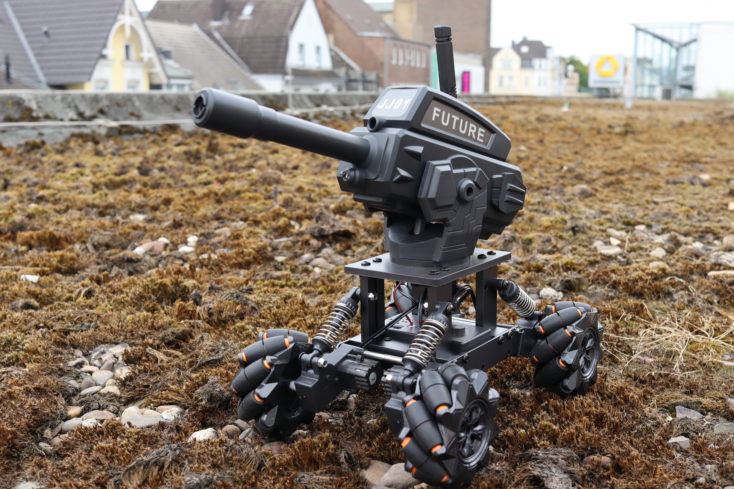 An expensive DJI role model and quite a few clones

A few years ago, drone manufacturer DJI launched the Robomaster S1. The remote-controlled “robot” had so-called Mecanum wheels, with which the vehicle could also drive sideways, and an eye-catching turret with a cannon, which also quickly earned it the description “tank.” The concept was cool, but unfortunately the Robomaster didn’t appear at first and otherwise also cost over 500€/$500.

Since then, the concept has been copied many times and you can find countless of these Mech-Warrior-Military-Armor-Tanks or whatever they are all called in China stores. One of them is also the JJ-01, which we got from Banggood. There’s no harm in trying it out, so we wanted to take a look at what to make of it.

The shipment was from China and after about two and a half weeks the package was with us. The box and contents were intact, as it should be, except for a few scratches on the box. As mentioned at the beginning, you have to assemble the vehicle yourself. After opening the package, you will find quite a few individual parts. But they are all packed in thick foam. Apart from perhaps the cannon, nothing can actually break here. The parts are either made of metal or very light plastic.

Besides the parts, we also find the necessary screws (in labeled bags, very nice), some tools, the manual (half Chinese, half English) and the remote control.

Quality of the parts

As mentioned, everything was undamaged, but I do have a few criticisms. First of all, the plastic parts feel really cheap. Typical cheap Chinese toys, you might know that. That doesn’t necessarily make the device bad, but the first impression when touching it isn’t the best.

The metal parts are okay, but not of the highest quality. On one part, the pre-drilled thread for the included screws was too big (luckily a part that held differently after assembly). The small Phillips screwdriver and corresponding screws are also too soft, which makes screwing them in a bit difficult.

None of this is a dealbreaker, but you can see how you come up with the nevertheless low price. There were no defects in the electronics, everything worked right away after assembly and still does today.

The assembly takes about an hour. If you are fast you can do it in half the time, if you take it easy it takes a bit longer, especially if you do it together with children. 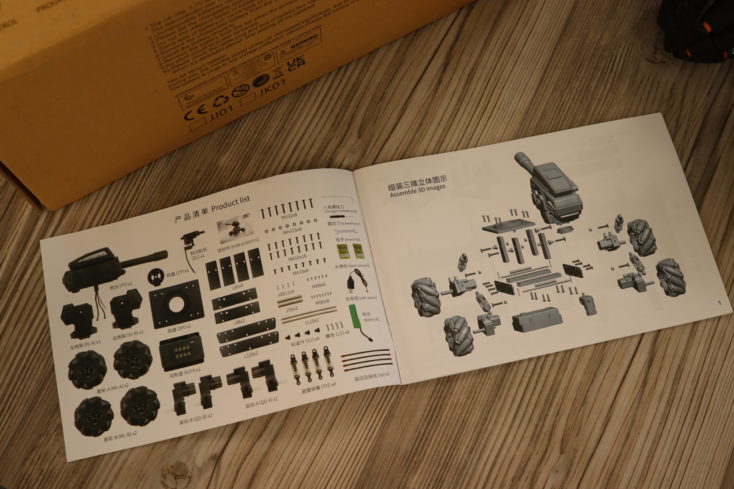 All parts were complete with us and as mentioned above also partly labeled. Thus, the various screws can be assigned to the correct construction steps without any doubt. The instructions are in Chinese and English, but since all steps are illustrated, you always know what to do.

First you build the chassis or the body of the vehicle. This is where the sturdy metal parts come into play. After the springs (yes, all tires are sprung separately) the tires are screwed on and finally the gun. With the electronic parts, it is important to make sure that the cables are routed correctly and then connected correctly to the central control unit. By the way, there are no bare cables, all of them are plugged into the provided sockets.

Apart from the small Phillips screws (fortunately, most people need the more practical hexagonal wrench), the assembly was really fun and didn’t present me with any problems. I can easily see it working well, especially with kids interested in technology.

Once all parts are screwed together and the cables are connected properly, you can start. The remote control needs four 1.5V AA batteries; the vehicle itself has a removable battery in the control unit. Both turned on and the connection is automatic after about a second. 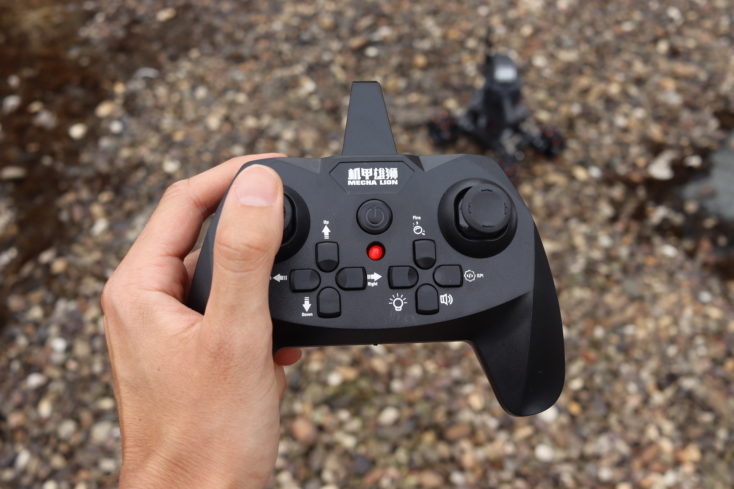 Unlike most remote control cars, you don’t steer with the front tires when going straight or backwards. Since the tires are so-called Mecanum wheels, the tank also drives sideways or can turn on the spot. The JJ-01 is not a racing car, but it can still reach a decent speed – especially in small spaces. 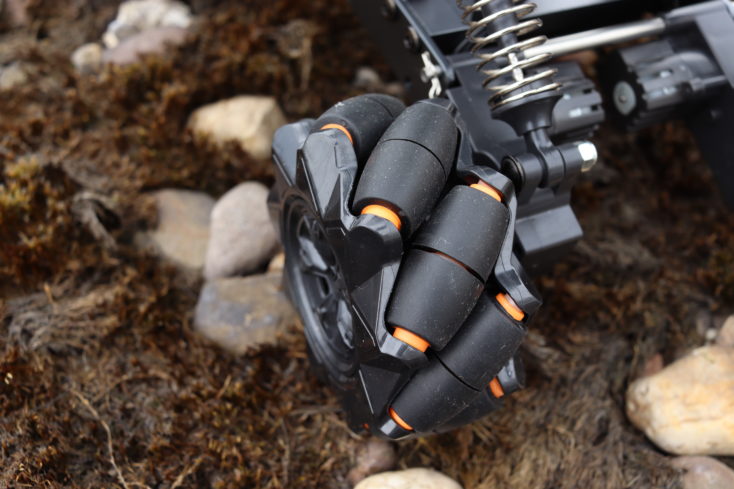 Also the turret can be turned by remote control and the gun can be tilted. So you can even aim it halfway well. You can’t shoot at an angle upwards though, the angle is maybe 30°.

And how does the shooting work? Included in the package are two small bags of small white bullets (less than the size of a pinhead), which serve as ammunition. One bag contains 200 bullets. You soak them in about 180 ml of water for 4 to 5 hours, which makes them swell and then they are about 5mm in size. The bullets are filled into the opening on top of the gun. 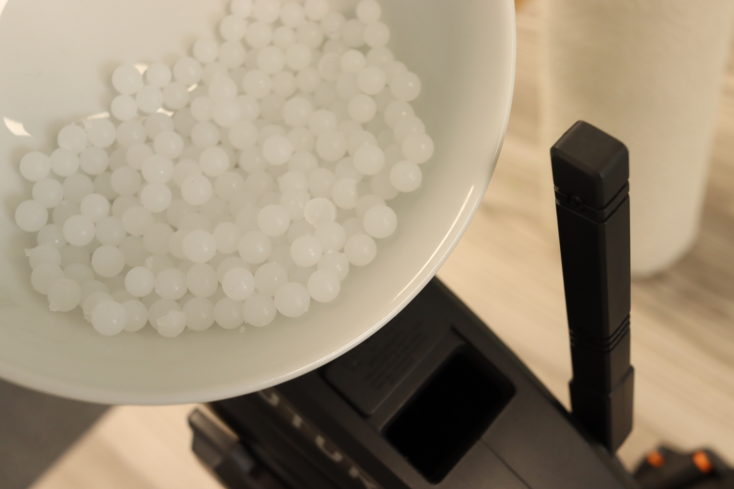 By pressing a button on the remote control, you can then shoot bullets. This works quite well, but sometimes there are several bullets in the barrel, which then plop out of the barrel rather than actually being shot. Luckily, you have a few dozen in the tank – you’ll have to clean up the apartment afterwards anyway 🙂 .

You can’t really hurt anyone with the bullets. A hit on the leg is hardly noticed through a pair of jeans, so shooting is basically harmless. Nevertheless, you should not aim at head height, but this is hardly or not at all possible anyway due to the limitations of the gun.

Since the bullets are very soft, it happens that they burst. This sometimes also happens in the gun, which you may then have to clean after use, otherwise even the barrel can get clogged.

What can I say, I had fun with the model. The assembly was easy and with a little help even children should be able to build it. Driving the JJ-01 is also fun, especially once you have built an obstacle course including targets for the gun.