2 Kommentare August 26, 2019by Thorben
Hey, guys! Just a heads up: The linked offer is already a bit older and the price of the gadget might have changed or it might not be available anymore.

Realme acts as a subsidiary of Oppo, one of the world’s largest smartphone manufacturers and the parent company of OnePlus. Since the Oppo Realme 3 Pro, it has been clear that they also want to take off in the West. But now the successor has already been introduced, at least in India. The Oppo Realme 5 Pro even offers a quad camera! 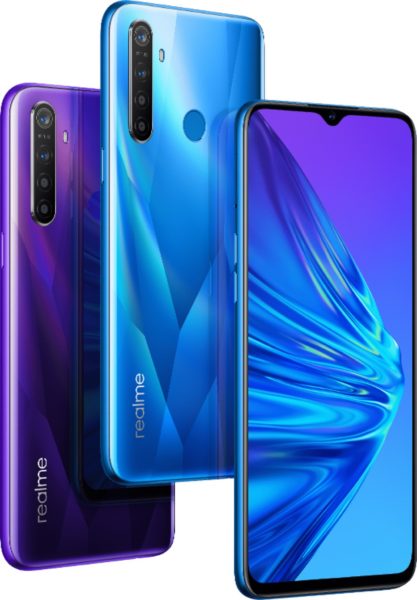 There is hardly any difference in appearance between the Realme 3 Pro and the new Realme 5. Again, the popular Waterdrop Notch, which is located above the display, is used. The display diagonal differs between the devices. The Realme 5 gets a 6,5″ diagonal, the Realme 5 Pro a 6,3″ diagonal. Both are equipped with an LC display, but the IPS panel only offers a Full HD+ resolution of 2340 x 1080 pixels with the Realme 5 Pro. The fact that the Realme 5 is only equipped with an HD+ display like the Xiaomi Mi A3 surprises me especially with the larger display. Is this going to be a new trend? 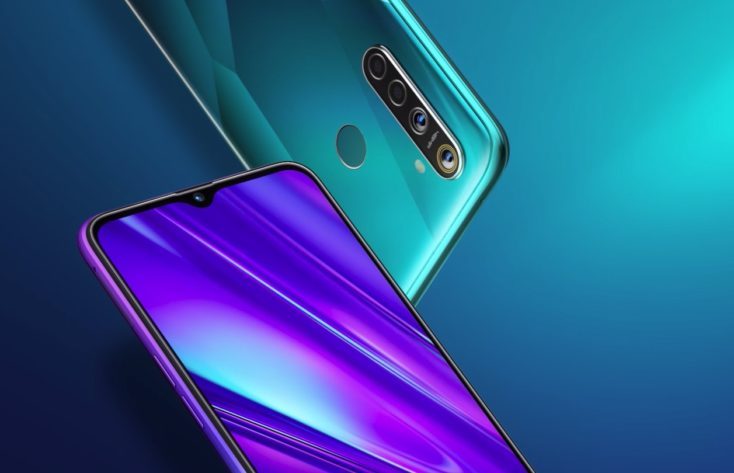 The back also looks the same as the Realme 3 Pro, but there is a holographic color effect. The phone is only released in extravagant Colorways (no black!), namely in Crystal Blue and Crystal Purple for the Realme 5 and in Sparkling Blue and Crytal Green for the Realme 5 Pro. The “crystal” look is easy to see when the sun is shining properly. The power button on the right and the volume rocker on the left side of the device are also located here. 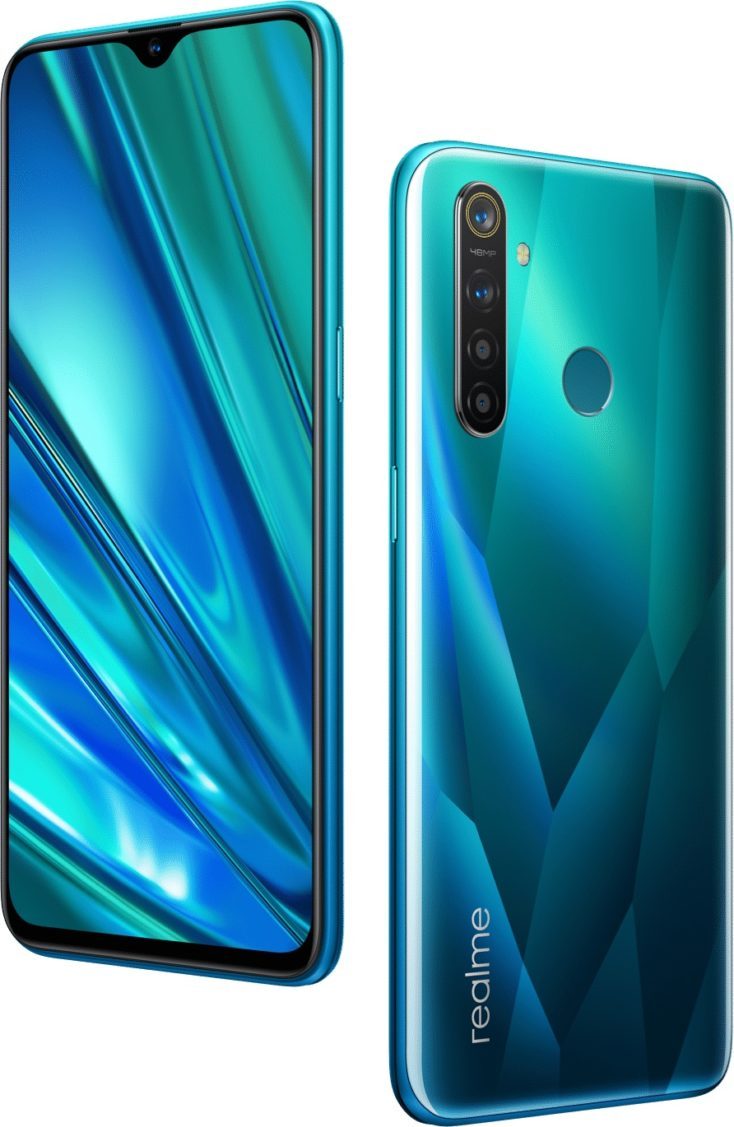 The fingerprint sensor is not in the display, but on the back, relatively centrally in the upper third. To the left of it is probably the highlight: the quad camera!

In fact, both models are equipped with a quad camera, but there are slight differences in sensors and functions. The Realme 5 Pro is theoretically a bit more interesting, as it uses the popular Sony IMX586 sensor with 48 megapixel resolution, which you know from the Xiaomi Mi 9. In addition, there is an 8 megapixel wide-angle camera with a 120.5° wide angle at a ƒ/2.25 aperture. The 2 megapixel “Portrait” camera is certainly only a sensor for additional image information, but the 2 megapixel macro camera is again very cool. The Lenovo Z6 Pro has proven how well this can work. On the front is the 16 megapixel Sony IMX471 sensor with a ƒ/2.0 aperture. 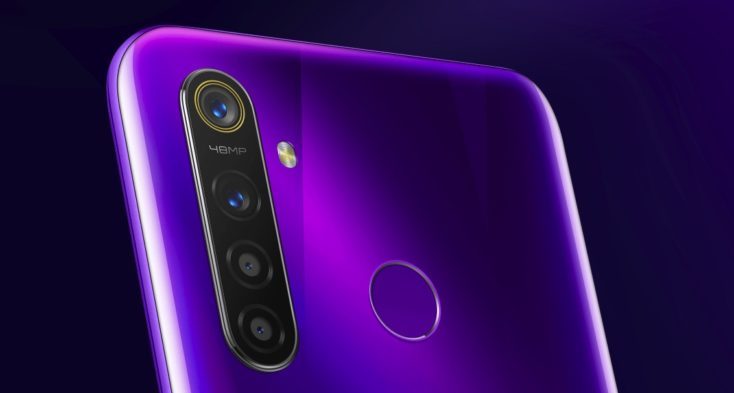 The normal and cheaper Realme 5 gets four camera sensors, but the main sensor is “only” a 12 megapixel sensor with a ƒ/1.8 aperture. The other three sensors are identical. Only on the front side there is a slight downgrade, the 13 megapixel sensor with ƒ/2.0 aperture is not described here. Probably it’s not a Sony sensor like the main camera.

But the rest of the equipment is also impressive. While the Oppo Realme 5 features the Qualcomm Snapdragon 665, the Realme 5 Pro is powered by the Qualcomm Snapdragon 712. Both are Octa-Core CPUs with enough power in the upper class. The difference in performance in contrast to the predecessor, the Realme 3 Pro, is hardly noticeable, as the Snapdragon 710 processor sits there. Interestingly enough, we have almost the same configuration as the Xiaomi Mi CC9e/Xiaomi Mi A3 and the Xiaomi Mi CC9.

In India you can choose the combination of RAM and internal memory almost freely. The Realme 5 is optionally available with 3/32 GB, 4/64 GB or 4/128 GB, whereby the mass memory can be expanded via a microSD card. This is also the case with the Realme 5 Pro, but here you have the choice between 4, 6 or 8 GB RAM and 64 GB or 128 GB memory. 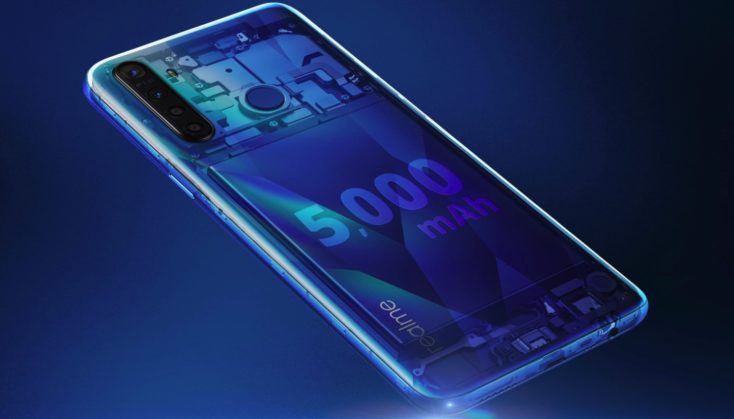 Of the two devices, only the Realme 5 could set up a record runtime, as it is equipped with a strong 5,000 mAh battery. But it can only be charged with 10W if you use the included Micro-USB cable. Like its predecessor, the Realme 5 Pro is equipped with the fast VOOC Charging with up to 20W, but there the battery is “only” 4,035 mAh big. But that’s still enough. And at least: the manufacturer has listened to us and at least has installed a USB type C port here!

As mentioned at the beginning, both devices have so far only been presented in India. Accordingly, there is no Global Version yet! Also the advantage of NFC doesn’t seem to be known at Realme yet, not even the Pro version is equipped with it – too bad! But there’s a 3.5 mm jack input, Bluetooth 5, ac-WiFi, GPS and Dual-SIM plus memory expansion. Both devices also run the Color OS 6 operating system, based on Android 9.

Since we really like the Oppo Realme 3 Pro, we are looking forward to its successor, even if we will probably have to wait a few more months in the West. The Realme 3 Pro is already available for $249.99, the successor will probably be a little over $300. It’s still unclear whether both versions will be available internationally and, above all, when. We will let you know as soon as the time comes.

Which version would you choose? For the bigger battery monster or the better quad camera?