0 Kommentare June 20, 2021by Thorben
Hey, guys! Just a heads up: The linked offer is already a bit older and the price of the gadget might have changed or it might not be available anymore.

Realme is the fastest growing smartphone manufacturer at the moment, but not even every smartphone is available everywhere. The Narzo series was previously only available in India, but now the Realme Narzo 30 5G is available on the global market.

Finally a snazzy back again

Since the Realme Narzo 30 5G is a budget to mid-range smartphone, you shouldn’t expect an innovative, independent design. The Narzo 30 5G gets lost in the crowd when looking at the front, the front camera as part of the display in the upper left corner is generic. The edge turns out a bit thicker, the corners are rounded. With a diagonal of 6.5 inches, it meets the current standard. The panel is a 90 Hz LC display with FullHD+ resolution like in the Realme 8 5G. The touch sampling rate is 180 Hz, the brightness even an unusual 600 nits.

The back, on the other hand, is finally more eye-catching, which Realme is also known for. Below the camera module is an elongated design element with an arrow pointing downwards, which underlines this dynamic when the sun is shining in the right direction. The phone is available in silver and blue, with a Narzo logo at the bottom left. The manufacturer calls it a “racing design”, which is supposed to emphasize the speed of the 185 g heavy Narzo 30 5G. The phone achieves speed thanks to the MediaTek Dimensity 700 processor. The SoC currently seems to be the first choice for all mid-range 5G smartphones. After all, it also powers the Redmi Note 10 5G, Vivo Y72 5G and the company’s Realme 8 5G. It also proved to be quite powerful and efficient in the test – so it is not a bad choice. In addition, there is 4 GB of LPDDR4X working memory and 128 GB of mass storage, which can be expanded via microSD card! Realme UI based on Android 11 is preinstalled on the internal storage. 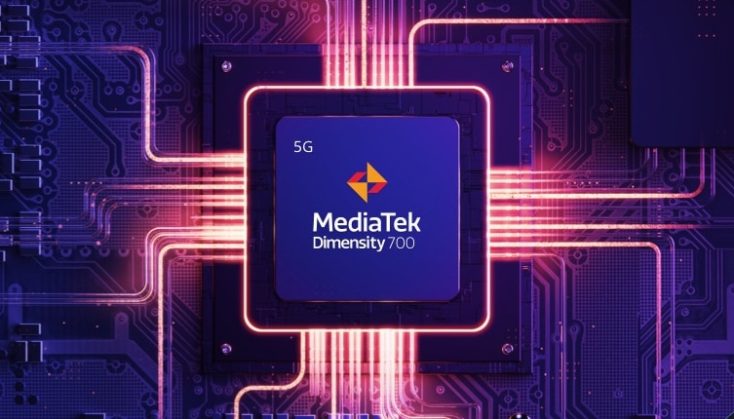 However, the CPU is not only chosen for its performance, but mainly for its 5G compatibility. Realme integrates all important 5G frequency bands like N1, N28, N77 and N78, but LTE Band 20 and Band 28 are also on board. You can also look forward to up-to-date Blutooth, GPS and Wi-Fi, but NFC unfortunately does not seem to be on board. The stereo speakers are a nice extra, which the Realme 8 5G does not have. 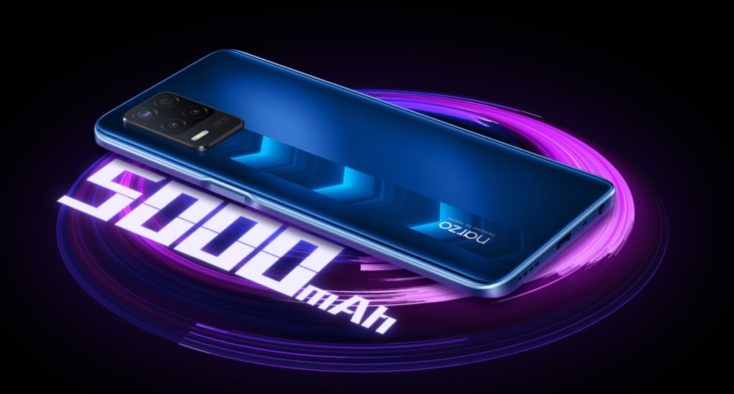 There is still a USB-C port on the bottom, which is used to charge the smartphone with a maximum of 18W. The battery is above average with 5,000 mAh. In combination with the 7 nm chip, a good runtime of 13 hours and thus almost two days of use should result despite 90 Hz. At least that is the case in the Realme 8 5G with almost identical specs.

Even if it doesn’t look like that at first: The Realme Narzo 30 5G has three and not four cameras. The setup is unfortunately identical to the Realme 8 5G. 48 megapixel main sensor with 2 MP macro and 2 MP portrait sensor. There is a 16 megapixel selfie camera on the front.

We basically like the fact that Realme’s Narzo series is also released globally. However, the Realme Narzo 30 5G is almost identical to the Realme 8 5G. The basic specs like display, processor, battery and camera are exactly the same, only the details differ slightly. The Narzo 30 5G has stereo speakers, the 8 5G does not. In return, the Realme 8 5G has NFC, while the Narzo does not. That is almost it, except for the design. Therefore, you can almost only decide based on the price.