realme Pad Mini: 8.7″ tablet presented – But for whom?

0 Kommentare May 22, 2022by Thorben
Hey, guys! Just a heads up: The linked offer is already a bit older and the price of the gadget might have changed or it might not be available anymore.

As smartphones became bigger and bigger, the need for tablets decreased. In recent years, only the iPad has proven that tablets are still relevant, now more relevant than ever. Realme has also recognized this and released the realme Pad at the beginning of the year. Like Apple, only a smaller version follows: the realme Pad Mini. But for whom? 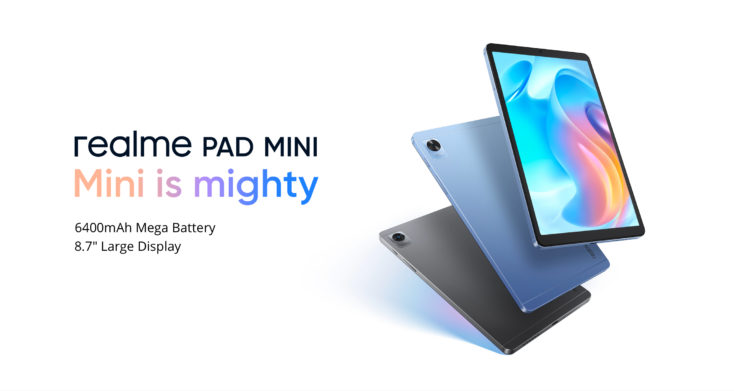 Bigger than the iPad Mini

Mini – that’s the name of the game. With a screen diagonal of 8.7″, the realme Pad is even closer to the 10.4″ screen of the “big” realme Pad, but also not far from the 6.7″ diagonal of the smartphone flagship realme GT 2 Pro. On the other hand, the resolution of 1340 x 800 is low; we are just about in the HD range. The pixel density of 179 ppi is far below average, and it seems that only an LC screen with a refresh rate of 60 Hz is used. With a weight of 372 g, it is almost 80 g heavier than its Apple counterpart, and it is also over a millimeter thicker at 7.6 mm. It is made of an aluminum casing that is available in gray and blue. There is room for an 8-megapixel camera on the back, and a 5 MP camera for selfies.

The comparison with iPads often lags behind for Android tablets when it comes to the processor. The Unisoc T616 installed in the realme Pad Mini does not stand a chance against Apple’s Bionic A15, which is currently the strongest chip. The octa-core chip offers a clock rate of up to 2 GHz in the performance cluster, but it is already three years old and is manufactured in a 12 nm process. The working memory is either 3 or 4 GB, the mass storage is 32 or 64 GB UFS 2.1 memory, but can be expanded via microSD card. The realme Pad Mini ships with Android 11, but an update to Android 12 has not been announced yet. However, this was done relatively quickly for the first realme Pad. The battery is big enough with a capacity of 6,400 mAh, while a Chuwi HiPad Pro with a 10″ display only has 7,000 mAh. According to the manufacturer, that is enough for 12 hours of YouTube videos. Charging is done with the included 18W charger via the USB-C port.

The official spec sheet has not yet been shared by realme, but we know from the release in other regions that we can expect dual band ac Wi-Fi, Bluetooth 5.0 and GPS. A 3.5 mm jack and OTG are also present. Apparently, there is also an LTE version of the realme Pad Mini that comes with 4/64 GB of storage and gives the buyer the option for mobile data. So, you can use Internet on the go with a SIM card.

Of course, it is always obvious to draw the comparison to Apple, especially when product names are similar or identical. Like this one, it is probably intended for special use cases, such as commuters, own workflows or students, who also want to have an inexpensive option. Especially because of LTE, I also think of students or people who are on the go a lot. The realme Pad Mini cannot keep up with the iPad Mini due to its processor.

However, it only costs 179.99 Euros (RRP) for the smallest version. In this price range, it rather competes with a Samsung Galaxy Tab A7 Lite. I like the realme Pad Mini better at first glance.