0 Kommentare June 25, 2021by Tim
Hey, guys! Just a heads up: The linked offer is already a bit older and the price of the gadget might have changed or it might not be available anymore.

Realme is expanding their product portfolio, which consists of smartphones, smartwatches and headphones, with a vacuuming robot. The realme TechLife Robot Vacuum is an LDS vacuuming and mopping robot that comes with 3000 pa of suction power and smart mapping. Can they make the leap into the robot vacuuming business?

Together a giant: BBK Electronics

For all those who are not familiar with realme, here is a short introduction. realme belongs to BBK Electronics, a group that is rather unknown to the masses under this name. However, if you mention the other brands like OPPO, Vivo or OnePlus, you have certainly heard of them before. Thus, realme does not lack technical know-how and size, and its smartphones perform quite well in our tests. 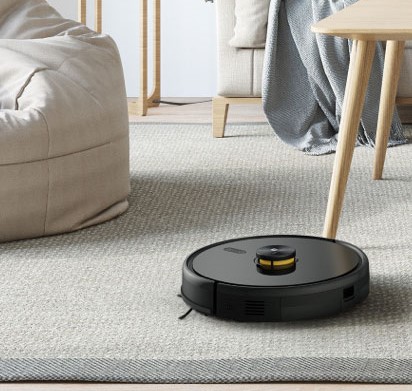 So now it’s on to their first robot vacuum, which they are releasing under their sub-brand TechLife. They’re not reinventing the vacuum robot here, but rather relying on familiar design and technology. The robot is completely wrapped in black plastic, but then we find the realme typical yellow accents on the LDS tower.

On the bottom, we find two rotating brush heads that move the dirt towards the main brush. The suction power is 3000 pa, which is quite a bit. The automatic carpet detection is also practical here, so that it can keep the power at a low level on hard floors and then use the full power on carpets. Nevertheless, you always have to try something like this in practice first. 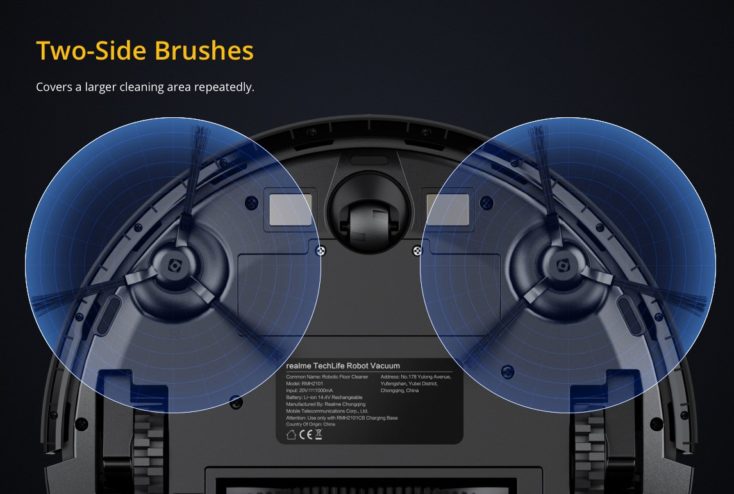 When wiping, one uses an electronic dosage of the wiping water and masters wiping in a Y-shape. Thus, the robot vacuum wipes a place several times in direct succession, which is supposed to achieve a better result. However, the real TechLife Robot Vacuum probably performs similarly to most vacuum robots. After all, new technologies that put more pressure on the floor, like those from the Roborock S7, do not exist here.

Water tank separately as an accessory

Realme advertises a noise level of 55 dB during vacuuming, but the robot vacuum is only that quiet in Quiet mode with 500 pa suction power. So expect a bit more noise at full power of 3000 pa.

The robot finds its way around your home via the LDS tower’s laser measurement. There is no 3D recognition via camera, so you have to move obstacles out of the way for the robot. While it cleans your apartment, it creates a map that you can find in the app. Speaking of the app, the TechLife Robot Vacuum uses the realme Link App (Android, iOS), which serves a similar purpose as the Xiaomi Home app. Here you can find an integration for all kinds of realme products with app, so some of you probably already know it. In the app, it is possible to divide rooms and also assign different suction and wiping levels to them.

For example, in the kitchen you can tell the robot vacuum that it should give full power here, while in the bedroom a little less power is needed. There are also a total of 5 memory locations for maps, virtual walls, no-mop zones, or even the option to automatically clean different rooms at different times. The integration of the voice assistants Amazon Alexa and Google Assistant is also present.

Now there are also vacuum robots from realme, an expansion of the portfolio ,which certainly makes sense, but we really did not expect now. They start with a solidly equipped LDS model on paper, which meets a lot of competition. In Germany, you can purchase it directly from Realme and pay €279 for the robot vacuum when pre-ordering. The Roborock S5 Max is also in this price segment, and the Dreame Bot L10 Pro is not too far away. Therefore, the robot has to prove itself in practice.

What do you think of the first vacuum robot from realme?