3 Kommentare February 28, 2020by Thorben
Hey, guys! Just a heads up: The linked offer is already a bit older and the price of the gadget might have changed or it might not be available anymore.

Realme also had to improvise after the Mobile World Congress 2020 in Barcelona was unfortunately cancelled. Now the company’s new flagship was presented during a livestream and is full of up-to-date hardware. The new flagship starts in April in Spain for a price of $649 for the 8/128 GB version, 8/256 GB costs $725 and the 12/256 GB version costs $812. So it is actually a bit more expensive than we expected. What do you think about the new Realme smartphone? A competitor for the Mi 10?

Since last year, Realme is probably something like the newcomer in China smartphones. Despite the cancelled Mobile World Congress 2020, Oppo’s subsidiary brand wants to introduce a new flagship: the Pro version of the Realme X50. The Realme X50 Pro wants to stand up to the Xiaomi Mi 10.

Pro version looks very similar to the normal Realme X50. That’s not unusual, after all, this is already the case with the Realme X2 and X2 Pro. This is due, for example, to the dual front camera in hole punch design, which is located in the upper left corner. The back is available in two colors: Moss Green and Rust Red, that is, green and red. Two colors that we have rarely seen before and we like them very much at first sight. Realme uses multilayer coating for the back, which is what makes these colours possible in the first place. 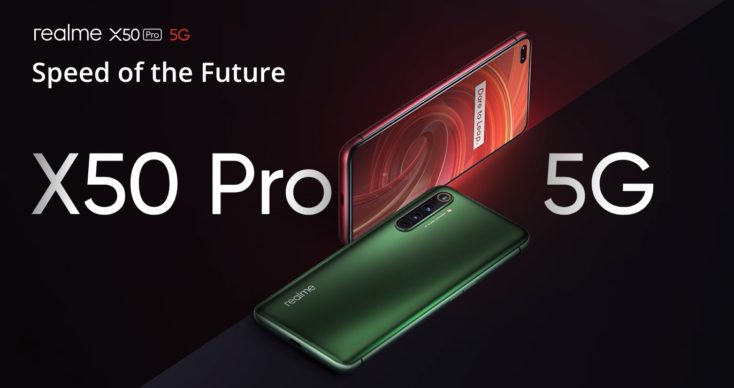 Furthermore, like the Mi 10, this is a curved display. As a quasi successor of the very good Realme X2 Pro, the Realme X50 Pro 5G is also equipped with a Super AMOLED panel with a 90 Hz refresh rate. The panel comes from Samsung and also uses a touch sample rate of 180 Hz. The resolution is 2400 x 1080 pixels in a 20:9 aspect ratio. The maximum brightness is 1000 nit, which is a high value, but not quite as high as the Mi 10‘s. The X50 Pro also receives HDR 10+ certification. 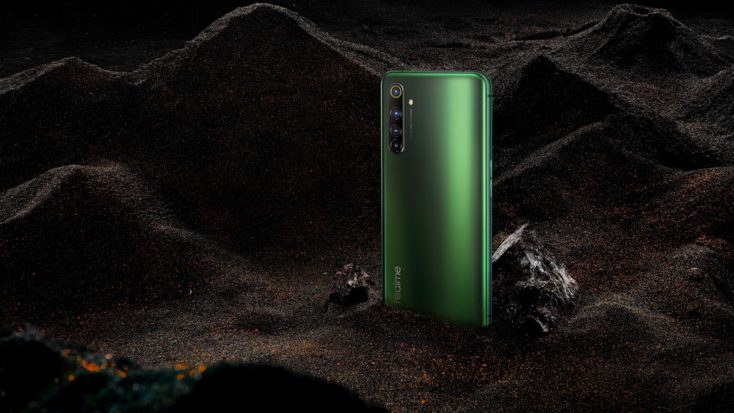 The fingerprint sensor also sits back in the display, whereas it sits on the side of the normal X50 5G. The sensor should unlock the phone in 0.27 seconds. 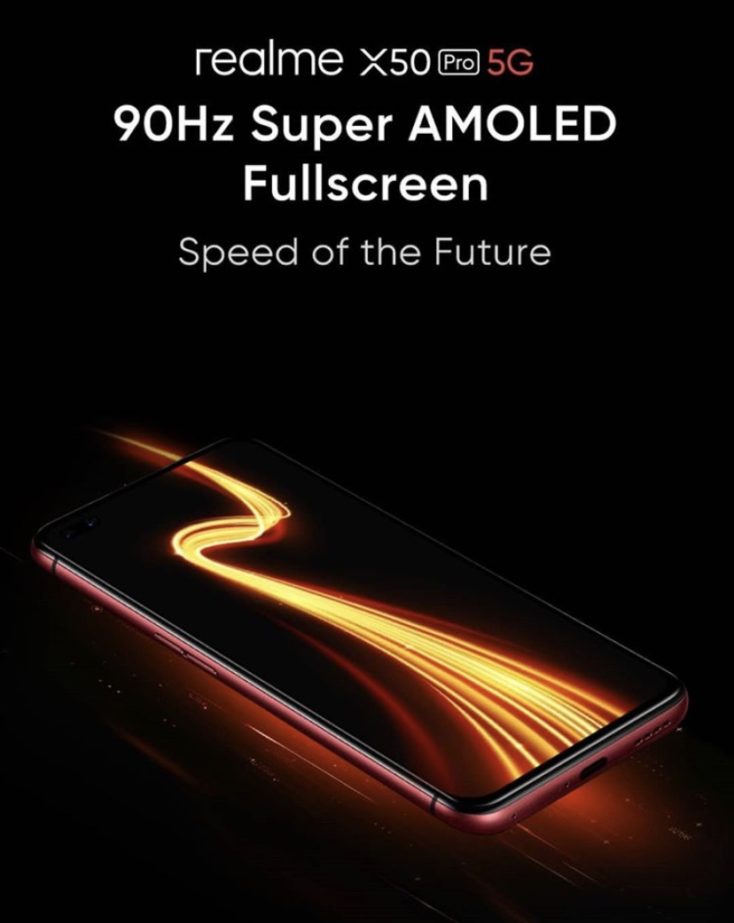 As expected, the flagship is equipped with the Qualcomm Snapdragon 865 processor. There are several memory configurations, but the maximum is 12 GB RAM and 256 GB mass storage. Interestingly, Realme uses LPDDR5 memory, which was first used in the Xiaomi Mi 10. For the internal memory, UFS 3.0 memory is used. In the AnTuTu benchmark, they achieved a value of over 605,000 points, one of the highest values so far. 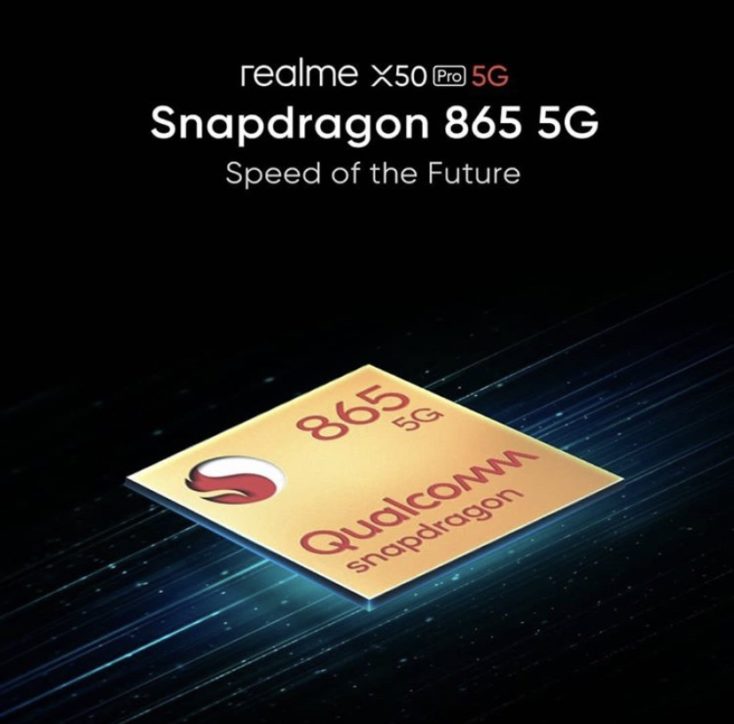 The battery turns out to be sufficiently large, meanwhile a ~4,000 mAh standard has been established. The X2 Pro has achieved records with the 50W fast charging, the X50 Pro 5G even surpasses these footsteps. Realme again uses two battery cells here. With the new SuperDart Charge, the phone can be quickly charged with 65W, similar to the Oppo Reno Ace. The corresponding 65W GaN charger is even included. So it needs 35 minutes for a complete charge. However, the Snapdragon X55 5G module will also need some battery capacity. 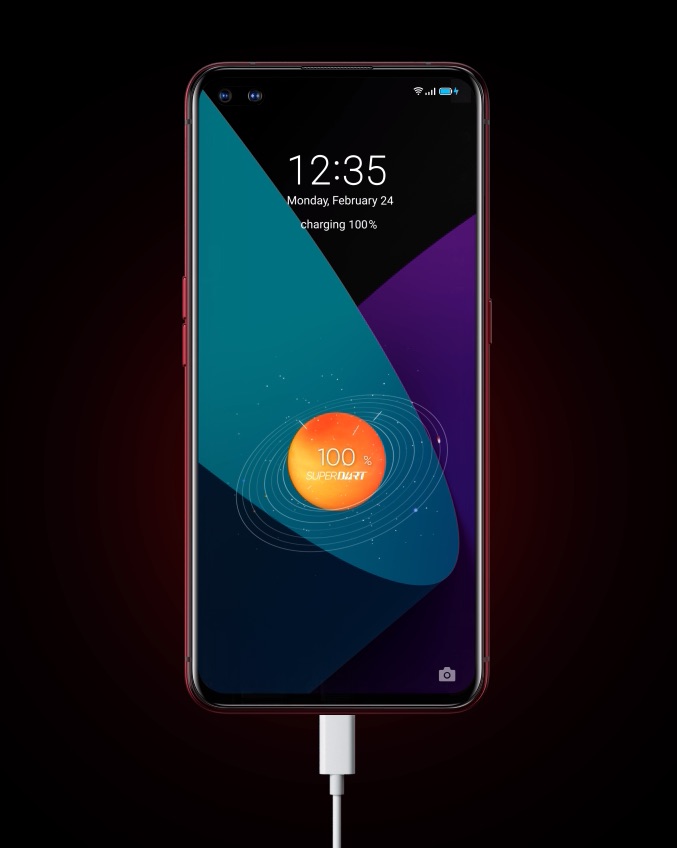 With a total of 6 cameras

On the back is a quad camera. The main sensor is a 64 megapixel sensor, although Realme probably uses the same Samsung sensor as the X2 Pro. In addition, there is a 12 MP telephoto camera that allows a 20x digital zoom, whereby only the 2x zoom seems to be optical. The third sensor is an 8 megapixel ultra wide-angle camera that also allows macro mode with a 3 cm close-up limit. The fourth sensor is a 2 MP portrait sensor for additional image information. 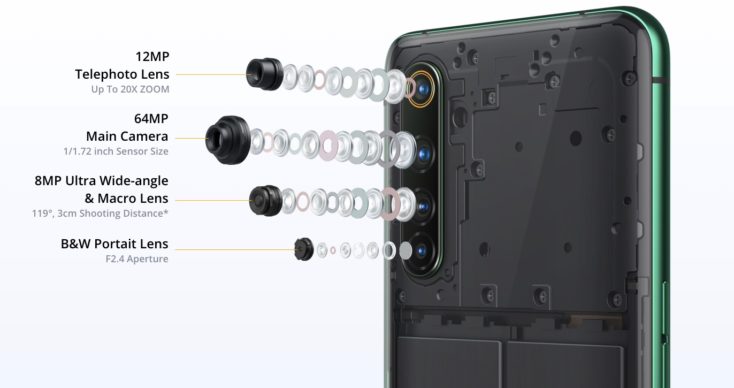 The Realme X50 Pro 5G also supports a Nightscape night mode. In video mode you can use the bokeh effect on both the back and the front. You can even shoot a 4K video and take a 64 megapixel photo at the same time. On the front is a dual-hole punch front camera that combines the Sony IMX616 32-megapixel sensor with an 8-megapixel ultra-wide angle camera. This is at least a sensible use of the dual-hole punch front camera and fortunately does without an unnecessary portrait sensor. 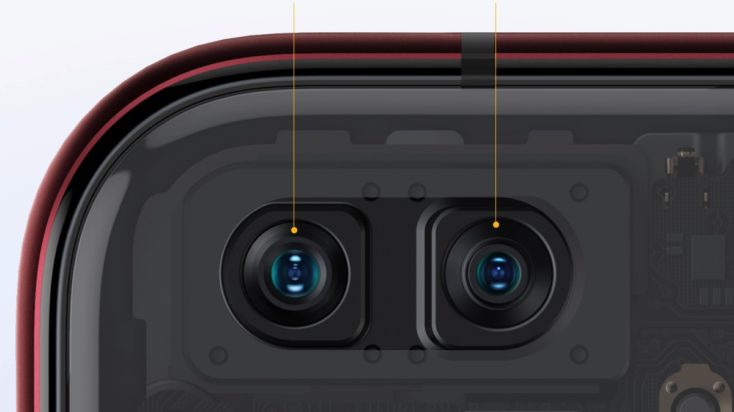 The Realme X50 Pro 5G will be equipped with Android 10. On it lies Realme’s own, new interface Realme UI. Since the beginning of the year, people are slowly changing from ColorOS to the own Realme UI, ColorOS is intended for the Oppo devices. This is the first time that a Realme smartphone is immediately equipped with the new operating system. There are new features, such as Realmes Audio Share, where you can play music on multiple headphones, whether they are connected via Bluetooth or cable.

The manufacturer’s flagship is, of course, equipped with NFC and relies on a USB type-C port, while the 3.5 mm jack connector is omitted. Dual-GPS is also integrated to enable the most accurate positioning possible. We are also excited about the stereo speaker, which supports Dolby Atmos and Hi-Res Audio. Of course, dual-band ac-WiFi, Bluetooth 5 and LTE as well as 5G are also included.

We know from various tests such as the Realme 5 Pro or Realme X2 Pro that Realme really does produce very good smartphones. Therefore, we are curious to see what can be achieved with the Realme X50 Pro 5G. It’s definitely a Xiaomi Mi 10 competitor in terms of features and at least it offers a telephoto camera. Unfortunately, Realme doesn’t have the price advantage we hoped for. For a newcomer, the price is quite high, but for the offered hardware it’s actually very fair.

Do you already have a Realme smartphone and if so, what are your experiences?