0 Kommentare March 1, 2021by Thorben
Hey, guys! Just a heads up: The linked offer is already a bit older and the price of the gadget might have changed or it might not be available anymore.

You might have guessed it already, but a TV with an 86-inch display diagonal does not fit into every living room by far. After all, you’re dealing with dimensions of 192.4 x 118.1 cm. Also, lugging it around the house probably requires at least two people, the total weight is almost 44 kg! At the same time, Redmi manages to keep the TV relatively thin. Including the stand, the TV takes up 44 cm, so it should fit on any sideboard, at least in this respect.

The resolution of the LCD panel is 3840 x 2160 pixels, which corresponds to the 4K standard. However, with the display diagonal of 86″, an 8K resolution would probably also make sense, depending on the seating distance, but it would also go beyond the price range. Unlike the larger Redmi Max 98″, the refresh rate is 120 Hz and not 60 Hz – nice! The viewing angle is 178° and the panel covers 92% of the DCI-P3 color space. In addition, there is Dolby Vision, HDR10+ and audio standards like Dolby Digital Plus and Dolby Atmos. Redmi also integrates two 12.5W speakers.

How smart is the smart TV?

Since it is a Smart TV, the TV is equipped with a Cortex A73 quad-core processor that harmonizes with the Mali-G52 graphics unit. In contrast to the 98″ version, however, there is noticeably less memory. Only 2 instead of 4 GB working memory and “only” 32 instead of 64 GB mass storage – a pity. Dual Band WiFi and Bluetooth 5.0 are also on board, after all it is a Smart TV. There are three HDMI ports on the back, but only one of them supports 4K at 120 Hz (HDMI 2.1). There is also an AV, an ATV/DTMB and an S/PDIF port, as well as two USB ports and an Ethernet port. 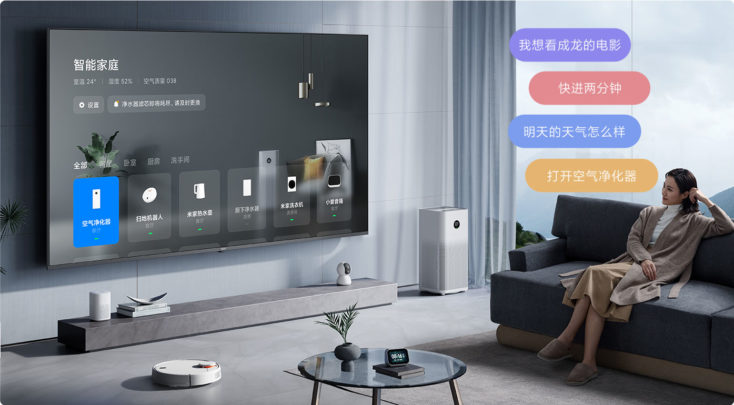 All well and good, but the crux of TVs is often in the software. The 98″ variant appeared with PatchWall UI, the Redmi Smart TV Max 86″ runs MIUI for TV, apparently a new TV interface from the Xiaomi forge. This is supposed to be faster and clearer, offer better voice assistance and have a Minimalist mode, which is especially recommended for older people. Some apps, such as the Game Center or the Mi Home app, are preinstalled, which also allows controlling smart home gadgets and gives you access to the Xiaomi surveillance camera, for example.

We’re sorry if you might have to nip your purchase decision in the bud here, but the Redmi Smart TV MAX 86″ is also likely to remain exclusive to China for now. The larger MAX variant never made it to us either. Why are we writing about it anyway? First of all, because it offers interesting technology and a strong price-performance ratio. Other 86″ TVs cost over €1,500, while the Redmi MAX 86″ TV is the equivalent of just under €1,000. Secondly, it doesn’t mean that the TV might not still come. Recently, Xiaomi has already unveiled a 75″ QLED TV for the European market. So who knows, we would wish for it. Even if 86″ is a bit exaggerated, right?