0 Kommentare March 12, 2021by Thorben
Hey, guys! Just a heads up: The linked offer is already a bit older and the price of the gadget might have changed or it might not be available anymore.

A short while ago, the Redmi Note 10 series was officially launched for the global market. This generation includes four devices. The most affordable is the Redmi Note 10 presented here, which is equipped with an AMOLED display. The other models are:

The Redmi Note series is certainly one of, if not the most important smartphone series from Xiaomi in terms of sales. The Redmi Note 9 series has four offshoots in total. The company continues this trend this year and releases four devices. However, even the cheapest Redmi Note 10 gets an AMOLED screen. 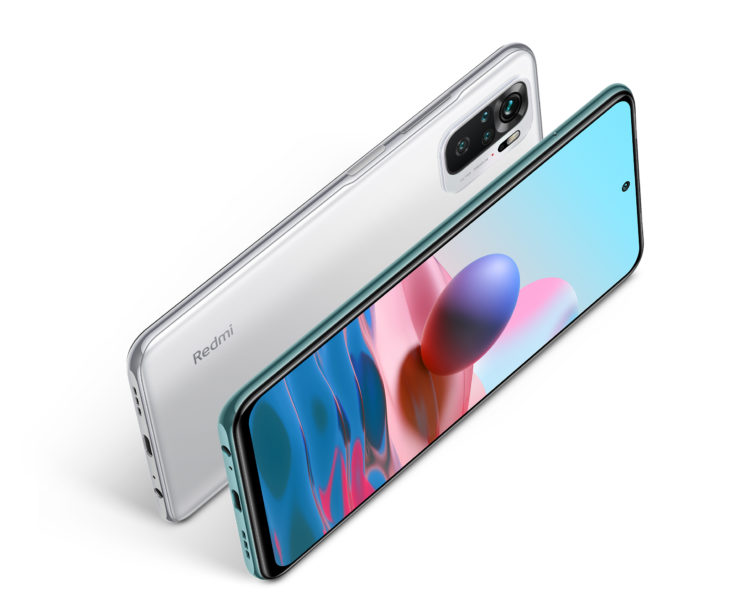 Technical specifications of the Redmi Note 10

AMOLED in this price range?!

Xiaomi does not make it quite easy for its fans and implements the same front design on all four Redmi Note 10 devices. They opt for a central punch hole, just like in the Redmi Note 9 Pro, so the front camera sits at the upper edge of the 6.43″ display. The display is the highlight, because Xiaomi and Redmi use an AMOLED screen for the first time. That is absolutely unusual in this price range, even with “only” 60 Hz like in this case. A Full HD+ resolution and a maximum brightness of 1100 nits are not missed, but the average is 450 nits. The contrast ratio is 4,500.00:1 and Gorilla Glass 3 display protection is also thought of. Despite the AMOLED display, the fingerprint sensor is still on the side. 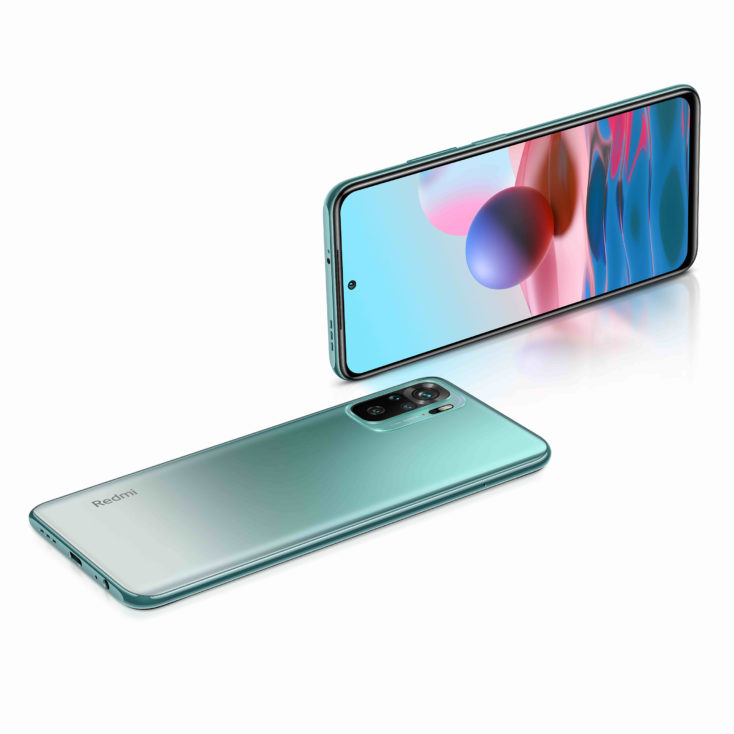 The Redmi Note 10 is available in three colors: Onyx Gray, Pebble White and Lake Green, whereby the new green colorway is particularly appealing. With a total weight of 178.8 g in the hand, the Redmi Note 10 is relatively light. The camera module on the back is reminiscent of the Mi 10T and Mi 11, although the Mi 11 is predominant due to the camera plateau. Surprisingly, Xiaomi even gives the Redmi Note 10 an IP53 rating, which means it is at least protected against splashing water. This applies to the entire Redmi Note 10 series and was first implemented by Xiaomi in the POCO X3 NFC – after all. 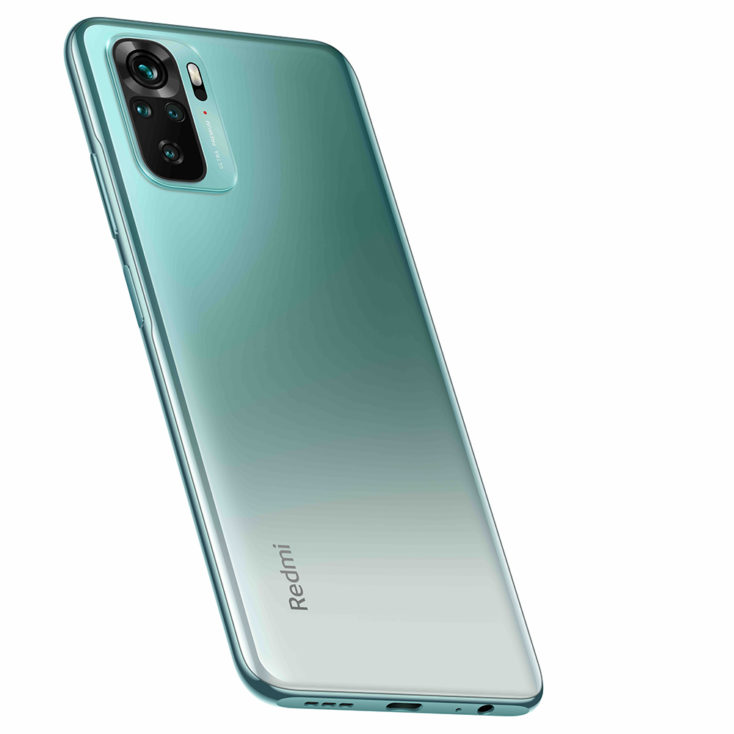 The look inside is a significant difference to the Redmi Note 10 5G, which Xiaomi also unveiled. At the heart of the Redmi Note 10 is the Qualcomm Snapdragon 678 processor, an octa-core clocked at 2.2GHz and paired with the Adreno 612 graphics unit. This is accompanied by either 4 or 6 GB of LPDDR 4X RAM and 64 or 128 GB of UFS 2.2 mass storage. MIUI 12 based on Android 11 is already preinstalled on it. However, the storage seems to be expandable up to 512 GB. 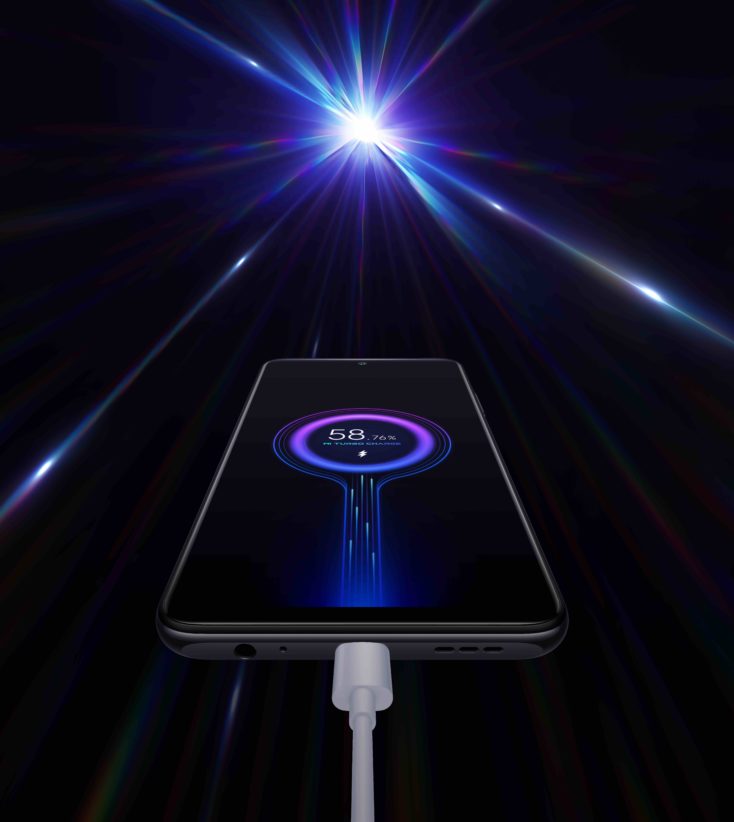 As you would expect from the Redmi Note series, Xiaomi gives even the cheapest model a decent battery capacity of 5,000 mAh. They already established this size for the Redmi devices in the previous generation. Especially in combination with the energy-saving AMOLED screen and the 11 nm chip, we expect a top battery runtime. More surprising is the 33W fast charging via the USB-C port, which is possible with the Redmi Note 10. Besides the USB-C port, there is also a 3.5 mm jack, LTE band 20, an IR blaster and a stereo speaker – strong. Only NFC has not been mentioned so far, but that could possibly change with an additional European launch. 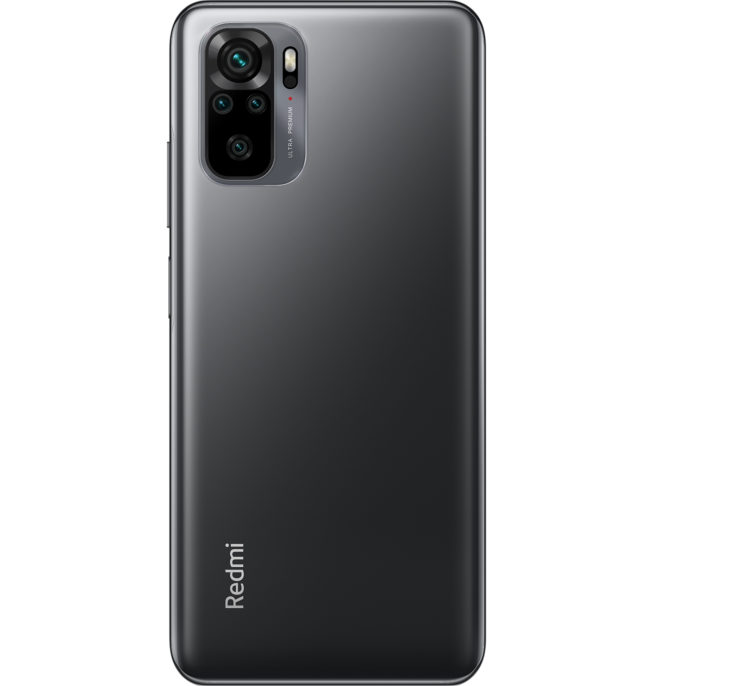 Those who want to take selfies can do so with a 13-megapixel front camera with ƒ/2.45 aperture. However, the 48-megapixel camera on the back is a bit more exciting, working with a ƒ/1.79 aperture and 1/2″ sensor size. The sensor is not specified in more detail, but it could be the same sensor as in the Redmi Note 9S. In addition, there is an 8 megapixel ultra-wide-angle camera with 118° shooting angle, 2 MP macro camera and a 2 MP portrait sensor for additional image information.

The Redmi Note 9 was the first Redmi Note device in the past few years that did not get an unqualified recommendation from us. The differences to the Redmi 9 were too small. That seems to change with the Redmi Note 10: AMOLED display, 33W charging, sufficient storage and stereo speakers are probably unbeaten in the price range! We still see the only sticking point in the processor, which we could not test so far. Apart from that, it could once again be a no-brainer.

Which Redmi Note 10 device do you like the most?