0 Kommentare October 25, 2021by Alex
Hey, guys! Just a heads up: The linked offer is already a bit older and the price of the gadget might have changed or it might not be available anymore.

The Redmi Note 11 will be unveiled in China as early as next Thursday. After the Redmi Note 10 series produced four models in this country alone, there will be three different versions of the Redmi Note 11 right at the launch, according to leaks. However, there are not only leaks, but also some official pictures that Redmi itself published on Weibo (Chinese Twitter). We have summarized all official information and leaks about the Redmi Note 11.

The design of the Redmi Note 11 seems to have been inspired by the iPhone 12/13 – at least in terms of the bezel. The Note 11’s bezel is completely flat and apparently also quite matte. The latter also applies to the back, which is equipped with matte glass. According to a Weibo post, this is supposed to reduce fingerprints and scratches. 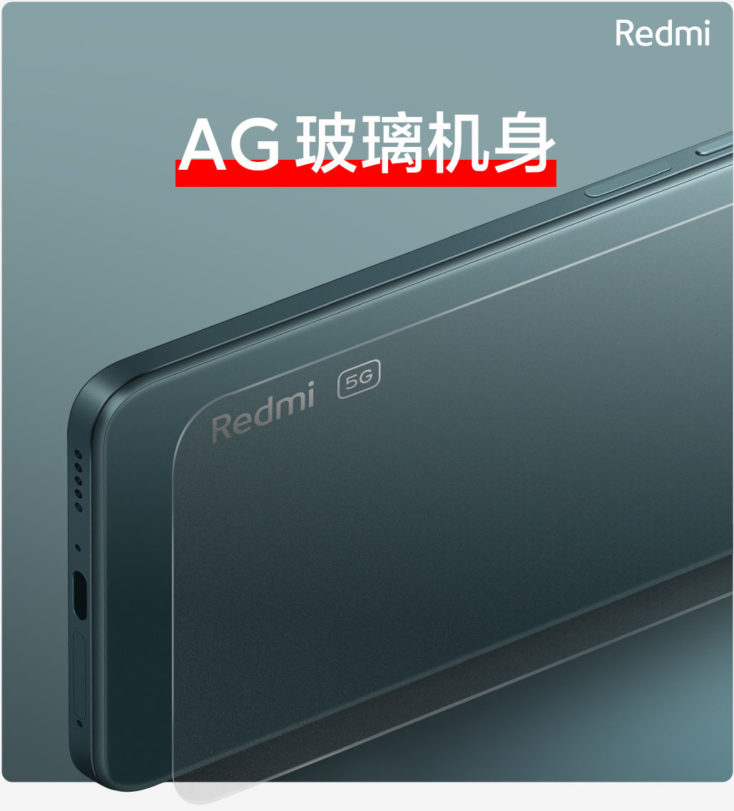 Like in the Redmi Note 10, the fingerprint sensor seems to be integrated into the very slim power button again. The volume rocker is located above it. However, not only the edge is flat, but also the entire smartphone. Redmi already advertises a “thickness” of only 8.34 mm, whereas the Redmi Note 10 is already only 8.29 mm thick. 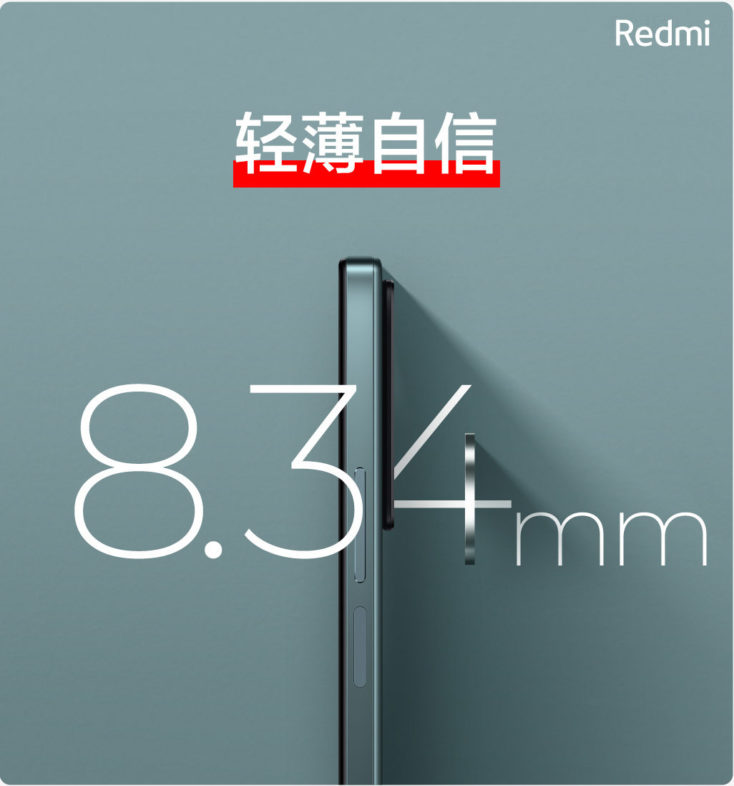 While the flat edges are a deviation from the previous design of the Redmi Note series, the camera casing is a mixture of the Redmi Note 10 and Redmi 10 and thus has a certain recognition value. By the way, “Camera Matrix” is written next to the main camera. Below that, there are two more cameras, an LED flash, and presumably an ambient light sensor like in the Xiaomi Mi 10T (Pro). The other lettering is limited to the “Redmi 5G” lettering on the bottom left. 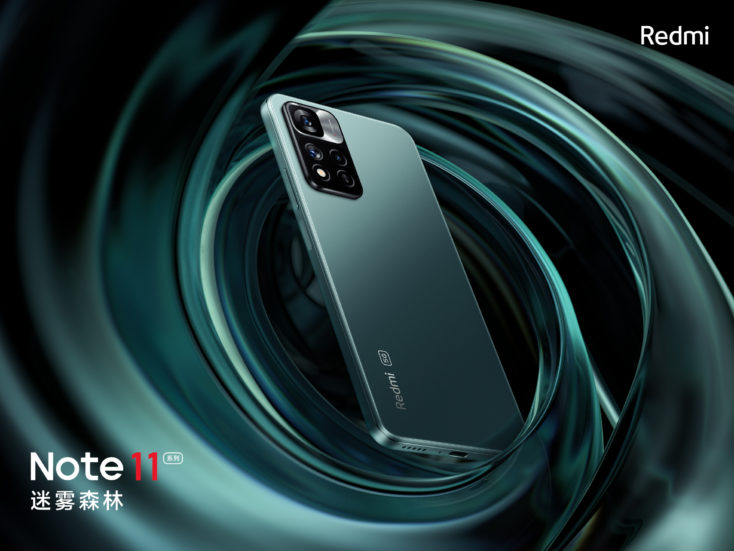 What is still visible in the first photo posted by Redmi is the headphone jack, one of two speakers and possibly an infrared blaster again. The stereo speakers apparently have a JBL branding. We can hardly see anything of the display in the official teasers, but we can already see that the front-facing camera is placed in the center of a punch-hole display. 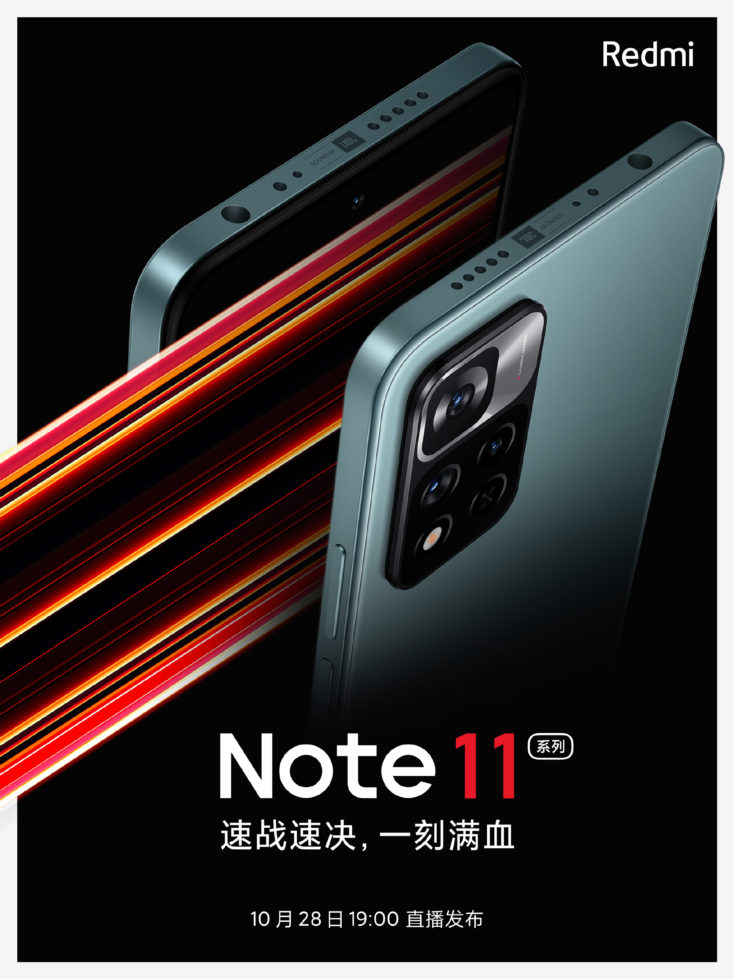 Specifications only through leakers so far

That’s it for official information for now, now unconfirmed leaks follow, but of course we don’t want to withhold them from you. According to the leaker “Arsenal” and a placeholder on JD.com, there are three versions of the new smartphone: a Redmi Note 11, a Redmi Note 11 Pro and a Redmi Note 11 Pro+. 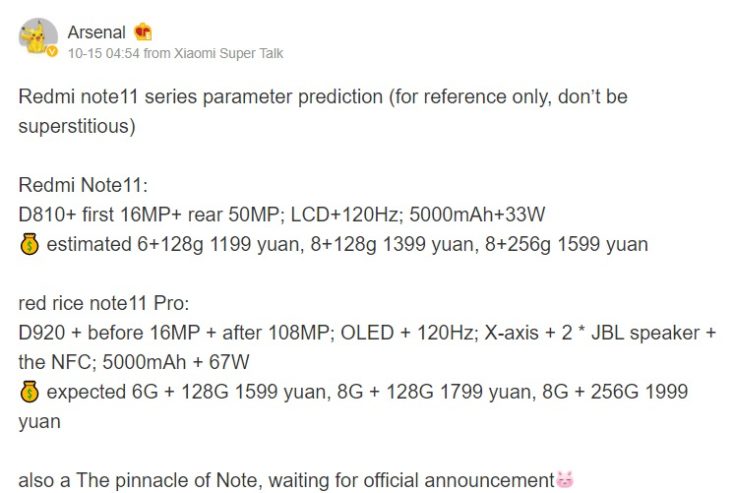 The Redmi Note 11 uses a Full HD+ LCD with 120 Hz and is powered by a MediaTek Dimensity 810. The still very new chip is the successor of the Dimensity 800, which is found in Oppo’s Reno4 Z, for example. In addition, there are 6 or 8 GB of working memory and 128 or 256 GB of mass storage. The main camera offers 50 megapixels, and selfies are taken with 16 MP. The power comes from the usual large 5,000 mAh battery, which can be charged with 33 watts. A special feature is that the display runs at 120 Hz even in the entry-level model, even though it is “only” an LCD. 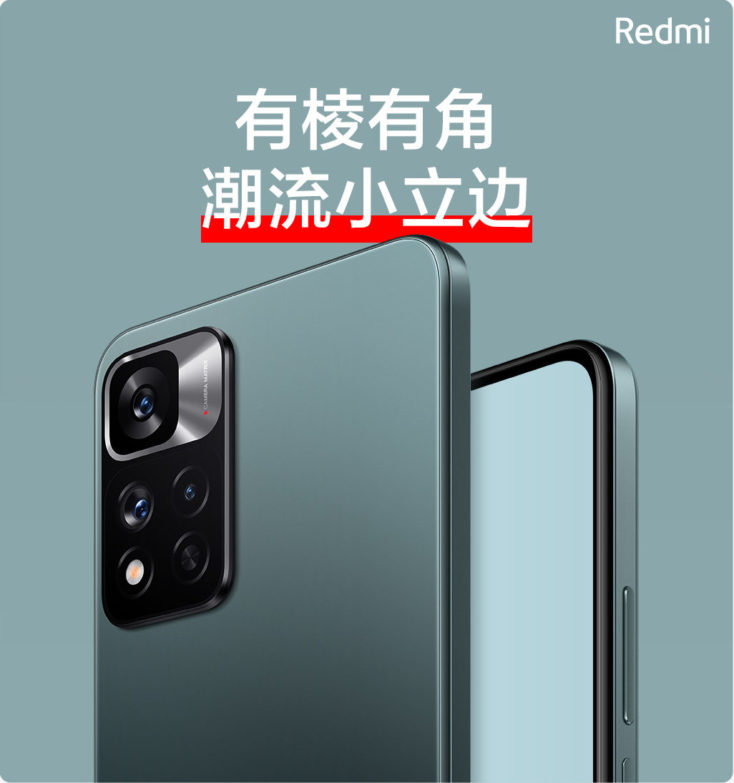 According to the leak, the Redmi Note 11 Pro lives up to its name and goes one better. Once again, we get a 120 Hz display with Full HD+ resolution, but this time it is an OLED. As the direct successor of the popular Redmi Note 10 Pro, this is not really a surprise.

MediaTek’s also brand-new Dimensity 920 works inside. The storage capacities (6/8 GB & 128/256 GB) are the same as in the normal Note 11. The battery size (5,000 mAh) is also the same, but it is charged with a strong 67 watts. In addition, there are the JBL speakers, which raises the question whether only the branding or the stereo speakers in general are meant. The main camera shoots with 108 MP. 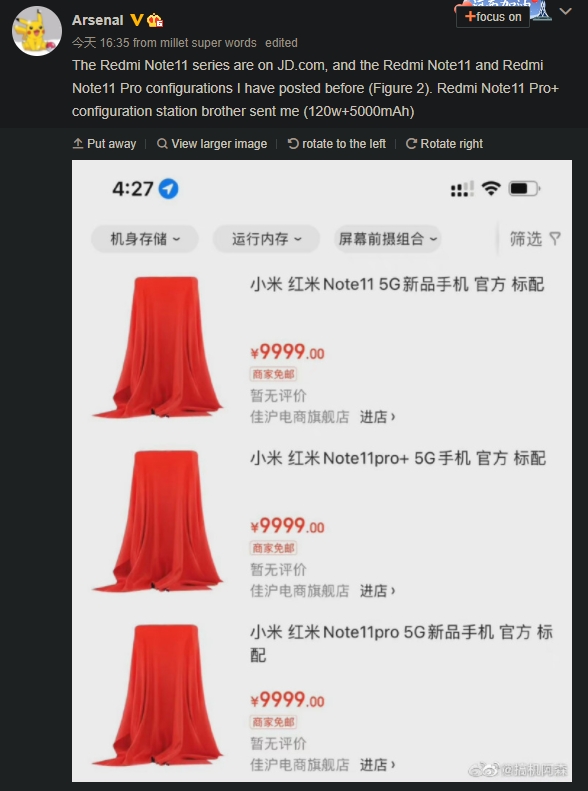 Last but not least, there is supposed to be a Redmi Note 11 Pro+, if you believe the JD.com listing. According to the aforementioned leaker Arsenal, the Pro+ will primarily offer the option of charging with 120 watts. However, the battery would probably remain at 5,000 mAh.