Actually the Redmi Note 9S is the Redmi Note 9 Pro introduced in India, but the suffix S is a bit confusing. But with a look at Xiaomi’s Indian smartphone portfolio, it clears up at least a bit. There, the Redmi Note 7 known in this country is also called Redmi Note 7S. The Indian Redmi Note 7 has not been released in this form for the European or Chinese market. Hopefully, this is a sign that one orients itself on the Indian market concerning the Pocophone X2 and Pocophone F2. 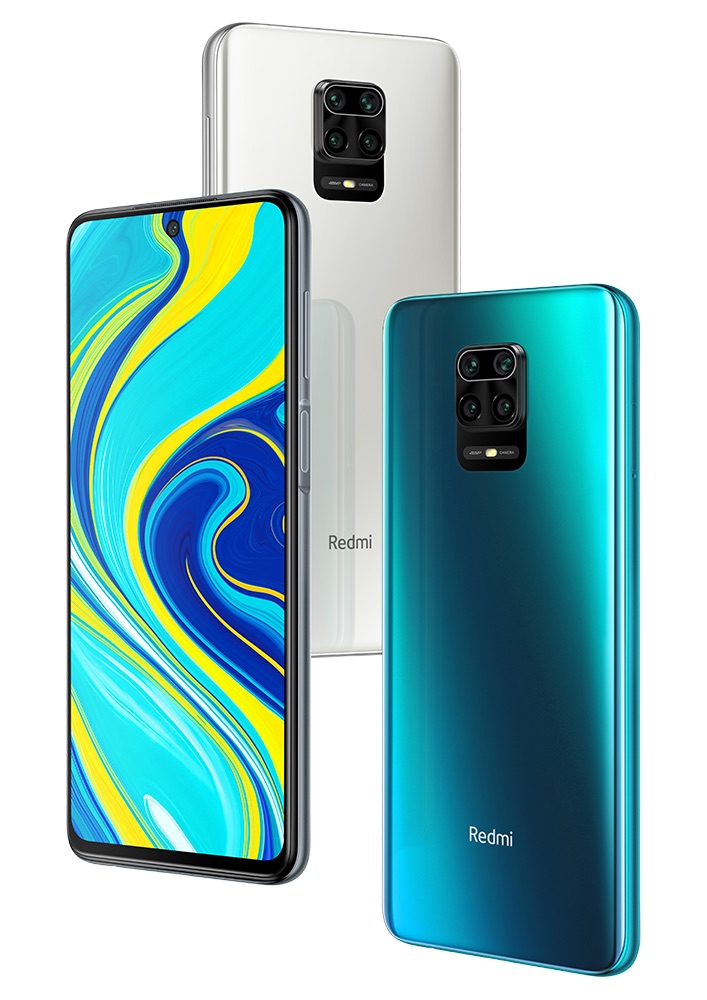 A mix of Samsung and Huawei

As it’s basically a Note 9 Pro, we also work with a 6.67 inch display, which makes the phone about the same size as the Xiaomi Mi 10. However, Redmi understandably relies on an IPS LC panel, which offers a Full HD+ resolution of 2400 x 1080 pixels. Like Samsung, Redmi uses a punch-hole design here, with the front camera centrally located at the top of the screen. Xiaomi calls this “Tiny Dot Display”, the panel has even been certified by TÜV Rheinland. The panel is protected by Gorilla Glas 5, but this also applies to the back. 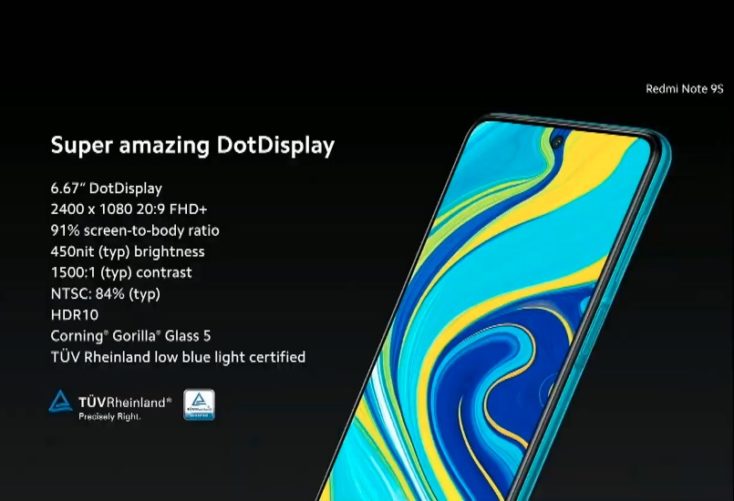 On the back side, one orientates oneself a tad bit on the Huawei Mate 20 Pro. There, the quad camera that is arranged centrally at the top catches one’s eye. In the camera module there is also the LED flash. At the very bottom there is the Redmi lettering. The Redmi Note 9S is available in three colours: Aurora Blue, Glacier White and Interstellar Grey. 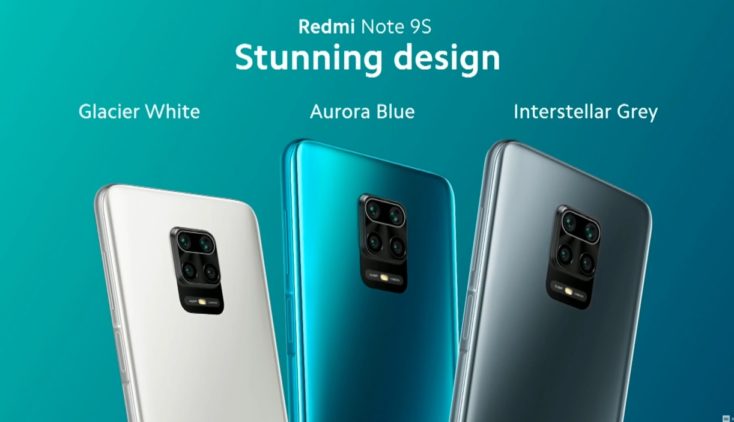 A popular current trend is also discernible here: The fingerprint sensor moves to the right side, as we have also previously seen on the Honor 9X Pro, for example. Despite the large battery capacity, the phone is still pleasantly thin with 8.8 mm.

The special feature of the Redmi Note 9S is in the device, the “S” could well stand for speed. The brand-new Qualcomm Snapdragon 720G Octa-Core processor works in the new midrange smartphone. The eight-core processor offers a lot of power and consists of a dual-core cluster with 2.3 GHz clock speed and a 1.8 GHz six-core cluster. Thus, especially the AI performance is much better. The AnTuTu benchmark turns out high with a good 278 000. In addition, there is 6 GB RAM and 128 GB memory, which can be expanded with a microSD card (max. 512 GB).

The fact that the back of the camera is a quad camera makes it look innovative for the first time. After all, Xiaomi uses a 48 megapixel main sensor with ƒ/1.79 aperture as well as an 8 megapixel ultra-wide angle camera with 119° wide angle, a 5 megapixel macro camera with 2 cm close-up limit and a 2 MP portrait sensor for additional image information. The front camera offers a resolution of 16 megapixels. However, the predecessor was already equipped with a pretty similar setup. 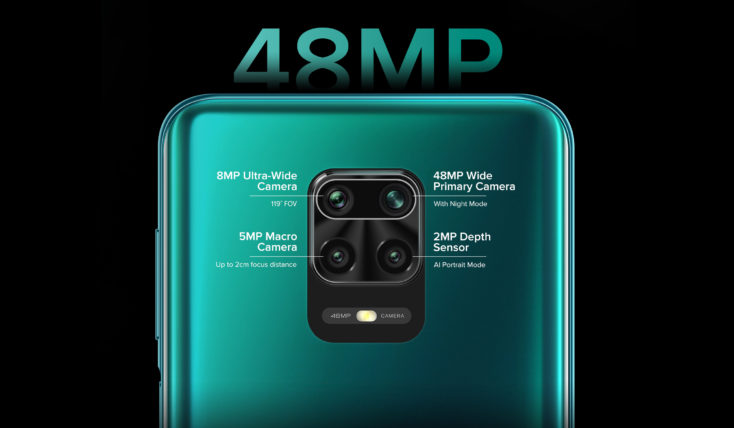 With a capacity of 5,o20 mAh, the battery turns out to be very large and, especially in combination with the energy-efficient CPU and the good energy management of the MIUI 11 operating system, should provide a runtime of 2 days. The battery can be recharged relatively quickly with a capacity of 18W. The charger in the scope of delivery even offers a maximum of 22.5W. 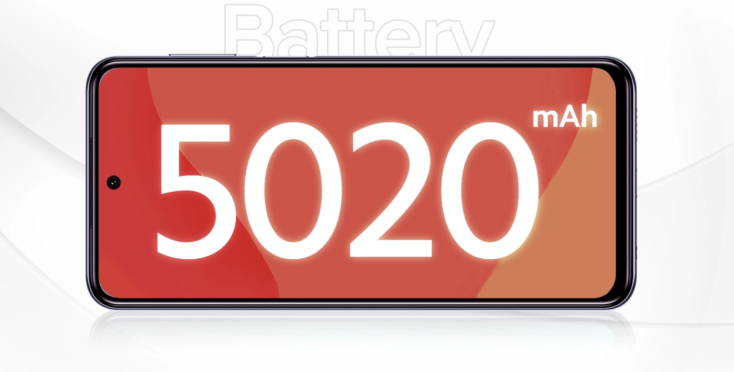 Of course, there is a USB type-C port and a 3.5 mm jack connector on the bottom side. In addition, there is an IR blaster on top as well as a dual SIM slot with the possibility of inserting two Nano-SIMs plus a memory card. As this is the global version, all relevant LTE Bands should be on board. This cannot be confirmed yet, because the official specs have not been published so far. But we will check that as soon as possible. Therefore Bluetooth 5, GPS, A-GPS and GLONASS are integrated. NFC is not included.

As stated in the launch event, the Redmi Note series is the fourth best-selling smartphone series in the world. Its predecessor, the Redmi Note 8, is the best-selling Android phone in the fourth quarter of 2019. The Redmi Note 9S is a consistent step forward and emphasizes the most important features: performance and battery life. We expect a lot from the new CPU, you should notice a vast difference to the Note 8. The battery capacity has also been increased once again by over 1,000 mAh.

On the other hand, not much has changed on the camera, and the design has only been slightly modernized. We are also glad that the name has been simplified a bit, especially the Pro Max version from India was a bit confusing.

The sales start for the global version will be April 7th via AliExpress, where the regular price is $249 for the 4/64 GB version. The 6/128 GB version costs $279, and you can save $50 each at the Mi Fan Festival. Alternatively, the phone can be pre-ordered at GearBest.