2 Kommentare April 23, 2020by Thorben
Hey, guys! Just a heads up: The linked offer is already a bit older and the price of the gadget might have changed or it might not be available anymore.

The tablet market has been neglected for some time, Samsung and Huawei do not manage to break Apple’s dominance. Xiaomi also seemed to have thrown in the towel. The last Xiaomi Mi Pad 4 tablet was launched in 2018. But now it seems that the Redmi Pad 5G Tablet is ready to be launched. This time also for us?

So far there is not much picture material and not all specs for the new tablet from Xiaomi, but the information so far is promising. The Redmi Pad 5G looks even more modern than the Mi Pad 4, the screen edges have apparently been thinned out even further. 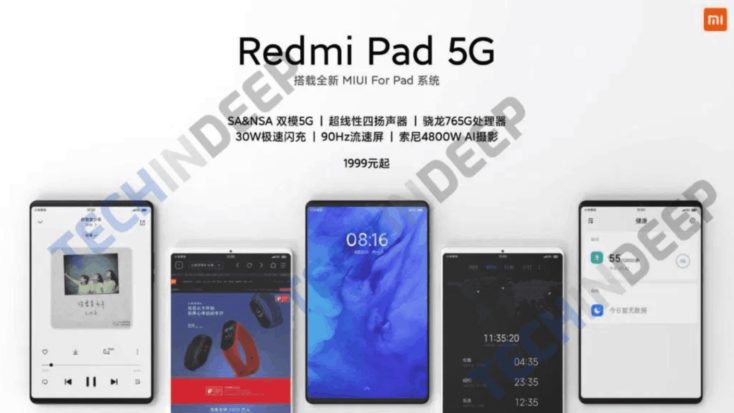 The display diagonal is not yet known, but since the (Xiaomi) smartphones tend strongly towards 7″, we assume that one saves an 8″ variant and goes for an 10″ diagonal. This is probably even a display panel with 90 Hz refresh rate! The higher refresh rate (60 Hz is standard) results in smoother animations and a more pleasant handling. The iPad Pro even uses a 120 Hz display. Whether it’s an AMOLED or LCD panel is not known yet.

The Qualcomm Snapdragon 765 G processor is probably inside, which is also found in the new Xiaomi Mi 10 Lite 5G. The Octa-Core processor with 2.4 GHz clock frequency offers more than enough power and supports 5G, just like the Mi 10 Lite. Therefore, it is also fitting that the tablet should be introduced at the same time as the new smartphone.However, this is not the global version, but the Mi 10 Lite Youth Edition with an alleged periscope camera.

There will probably be different memory configurations. The battery should be able to be charged quickly with 30W, which of course makes even more sense for a tablet with higher capacity. On the backside the tablet is equipped with a 48 MP camera, which also offers AI functions. With this, one might want to stand up to the iPad Pro with dual-cam and LIDAR scanner. In addition, there are also a total of four integrated speakers for spatial sound.

On the tablet itself, the new MIUI 12 operating system should already be running, which will be presented at the same time as the Redmi Pad 5G and the Xiaomi Mi 10 Youth Edition. This would then be based on Android 10.

It’s about time! And apparently we don’t have to wait much longer. The Redmi Pad 5G Tablet will be introduced on April 27th! But for now only in China, so we’ll have to be content with a Chinese version for now. Also from the predecessor there never was a global version on the market. This could also be due to the fact that the name Mi Pad was too close to Apple’s iPad. Could this change with the release under the Redmi brand?

We hope so! The price of the tablet is supposed to be around 1999 Yuan, the equivalent of $282.29. As you know, the price will increase with the release. Besides that, the integrated 5G is unfortunately an additional charge, maybe there will be a 4G version for the western market. Would you be happy about a new Xiaomi tablet or have smartphones completely pushed tablets off the market?