17 Kommentare June 17, 2020 by Maike
Hey, guys! Just a heads up: The linked offer is already a bit older and the price of the gadget might have changed or it might not be available anymore.

An air conditioning system measuring 14 cm x 14 cm x 14.5 cm that not only accelerates the air like a fan, but also cools it seriously? Can the Arctic Air replace a fan or even a real air conditioner? 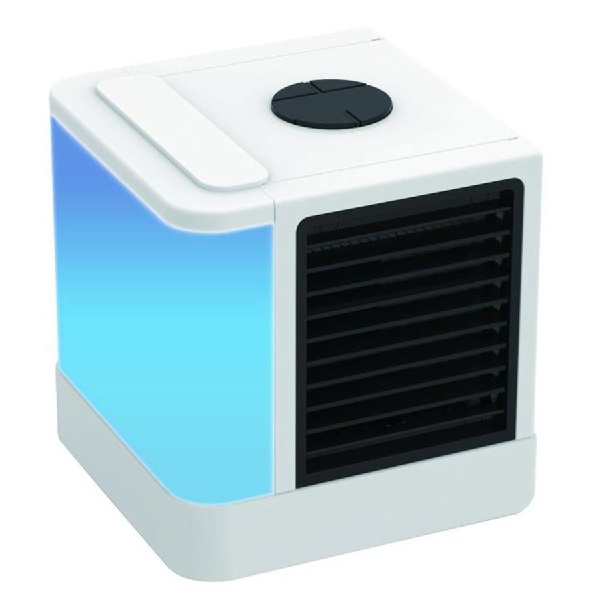 After a real hype arose around the small table air conditioner at the beginning of May, this little “air conditioner” was sold out within the shortest time. As the production couldn’t match the demand, an alternative to the product was quickly sought and found. This new model has now been sent to us to review. Compared to the first Arctic Air model, measuring 17 x 17 x 17 cm, the Antarctic Air, measuring 14 x 14 x 14.5 cm, is slightly smaller but basically works according to the same principle.

The small table air conditioner is so energy friendly and it is operated via micro-USB cable. While a corresponding cable is included in the delivery, a socket adapter is not included.

Functionality of the table air conditioner

Compared to an ordinary fan, the Arctic Air Table air conditioner is equipped with a 375 ml water tank. 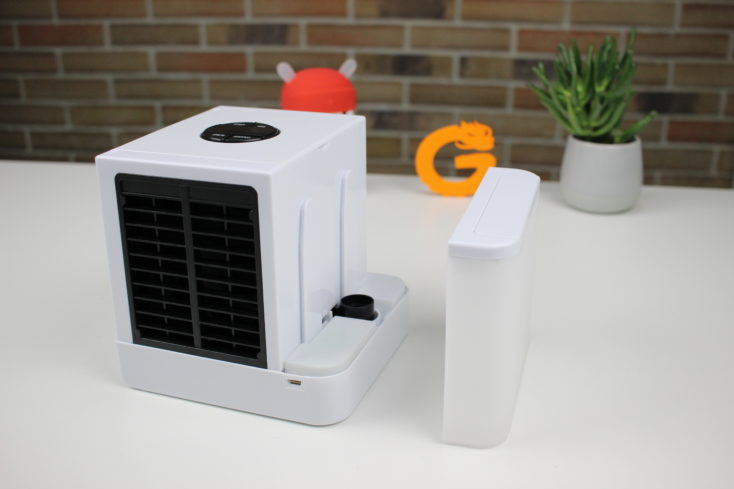 The water, which should be as cold as possible to achieve good results, is led from the water tank into a small basin. 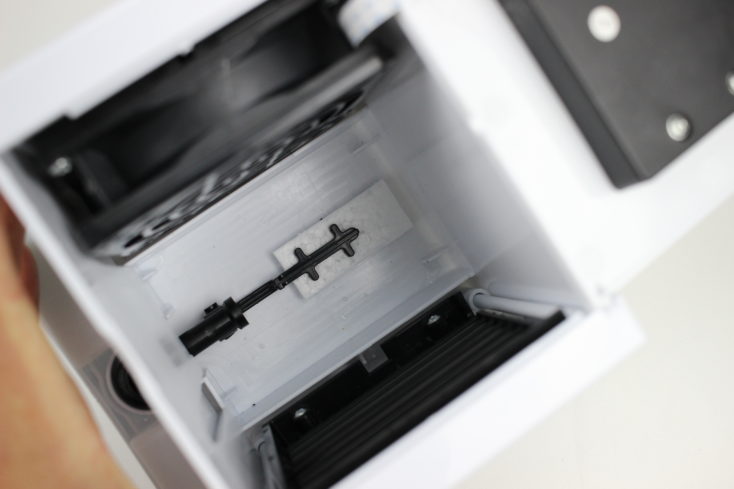 From there, the water is drawn into a kind of air filter, the lamellas of which absorb the water and are completely saturated with it after about one minute. The cooler is installed in front of the fan so that the accelerated air must pass through it, which is cooled in the meantime – that’s it! 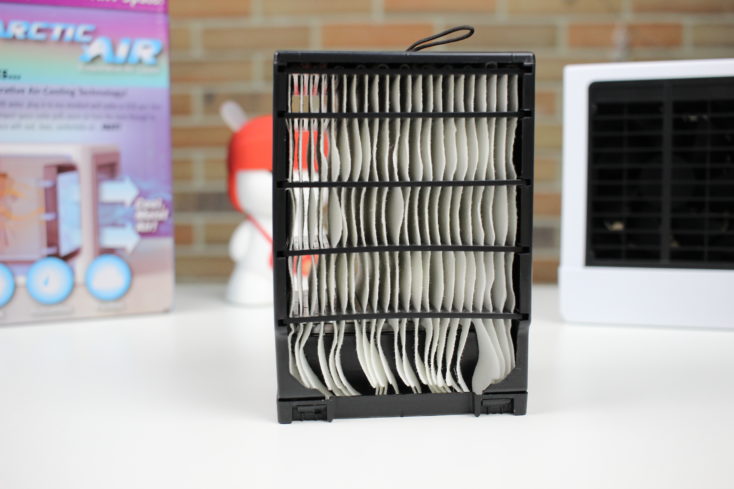 The processing of the small plastic box is sufficient overall. The control element is wobbly, the micro-USB port is moved upwards in the much too large recess and the float, which controls the level of the water chamber, is held in position by a small piece of polystyrene. 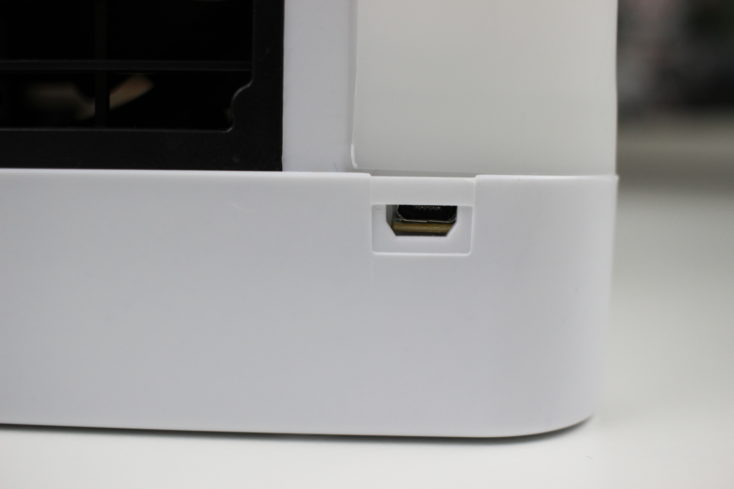 The LED lighting of the water tank, which illuminates the entire tank on marketing pictures, looks really sad. In practice, our model has an LED that does not even begin to illuminate the entire tank in daylight. 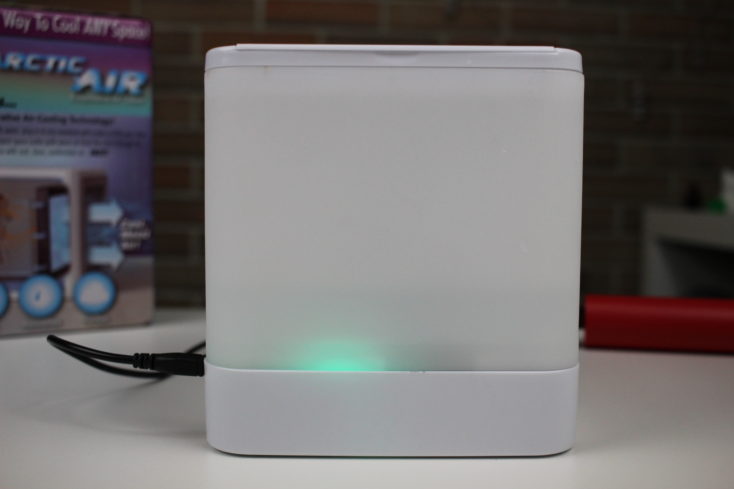 In summary: Everything works somehow, but the workmanship leaves much to be desired. If this is different for the first model, which is now available again, we can’t tell you. Apparently there wasn’t much thought given to the design either, the Artic Air table air conditioner looks okay. It is made of plain, white plastic. Only the control element and the ventilation inlet and outlet are coloured black.

The fan of the air conditioning system can be adjusted in three stages using the fan button. The water tank is also equipped with LED lighting, which lights up in seven different colours with the light button – a nice gimmick.

In addition, there is a sleep timer and an on/off button.

Does the Antarctic Air table air conditioner cool the air? 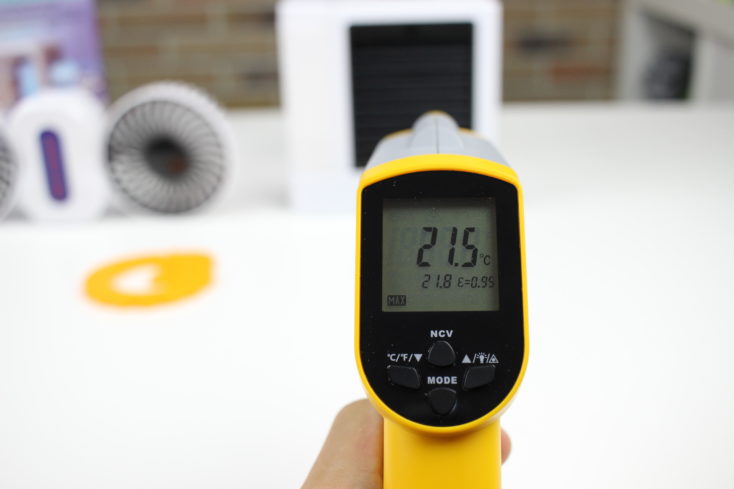 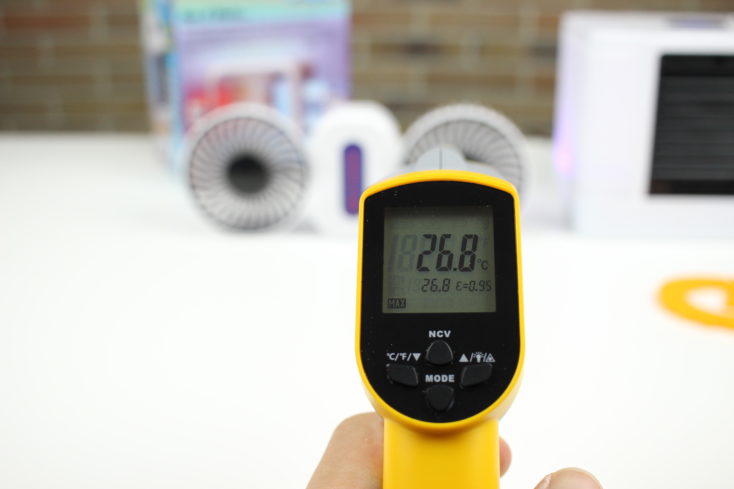 An entire room or a tent cannot be cooled down with the low cooling capacity. Rather, it seems to be meant to take up space on the desk. In my opinion, the Arctic Air table air conditioner is the better alternative for the summer than a fan.

At a short distance the Arctic Air table air conditioner is able to cool the air about 4°-5°. However, the effect is not strong enough to cool a tent or even a room. Moreover, the air would become quite humid if it were to work.

Unfortunately, the workmanship of the device could not convince me in the test. The cheap clone, which was probably only created because of the high demand for the first version, has several shortcomings. These do not affect the functionality, but spoiled the first impression. In any case, the filter should be dried after use. Simply remove the water completely and let the fan run for about half an hour. In this way mold can be avoided. There doesn’t seem to be any replacement filters, at least for the moment.