2 Kommentare May 1, 2020by Tim
Hey, guys! Just a heads up: The linked offer is already a bit older and the price of the gadget might have changed or it might not be available anymore.

Roborock has announced the S6 MaxV for the end of June, which could become a real beast in terms of hardware and software. As the first Roborock model, the S6 MaxV brings floor storage and AI detection of small obstacles such as cables, shoes or even dog excrement. If the manufacturer is also convincing in these categories, it will probably be the best vacuum robot in 2020. 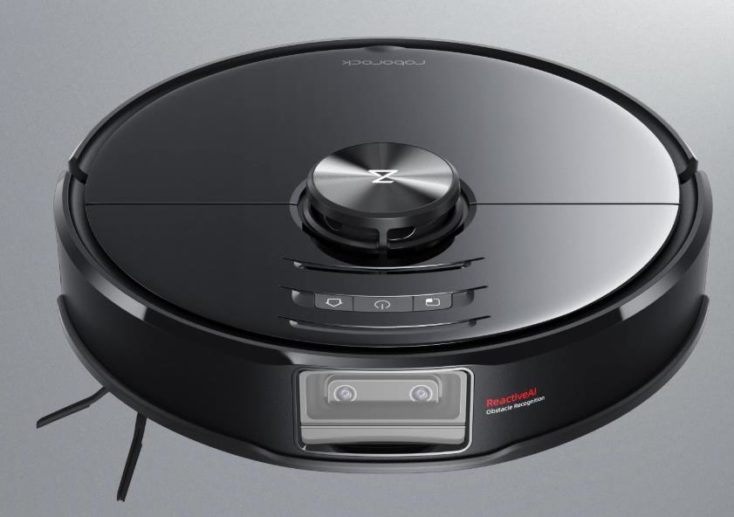 The S-series from Roborock is the manufacturer’s premium range. Accordingly, we compare each new model with its predecessors.

For several years now I have been testing vacuum robots of all navigation types, manufacturers and price ranges. One difficulty that can be solved with virtual walls and no-go zones, but which has always been a problem up to now: No matter how well the round household helpers scan rooms or detect obstacles, small objects such as cables, shoes, socks or even dog excrement were variables in the household that could not be mastered up to now. Also because they are not placed in the same place every day.

Ecovacs is considered a pioneer in the field of AI obstacle detection with the Deebot Ozmo 960 and soon to be released T8 AIVI. However, the Ecovacs system called AIVI does not yet work one hundred percent in such a way that easily destroyed cables, for example, could simply be left lying around carelessly when the robot is working and we are on the road ourselves.

Roborock is now venturing into this promising technology with the S6 MaxV and is installing a stereo camera which, in combination with the LDS (Laser Distance Sensor), should be able to detect even small obstacles and take appropriate evasive action.

By means of two camera eyes at the front of the vacuum robot (in the middle of the bumper) the vacuum robot detects objects in 3D. Up to 30 images per second can be processed. For this purpose, a powerful Qualcomm APQ8053 processor chip – for vacuum robots – was installed so that the robot can handle the data volume of images.

The S6 MaxV should be able to detect the following small obstacles:

A recognized object is displayed as an icon in the Roborock (Android, iOS) or Xiaomi Home (Android, iOS) app. For example the favourite slipper of the houseman. This way you can see what the robot “sees” in the household and what it doesn’t recognize even when you are on the road. The distance and size of the object are measured and included in the navigation.

In addition, the robot should also be less easily irritated by its camera-LDS combination when it is lifted, for example. It should then be able to orientate itself again much faster.

Data protection: What happens to my data?

Built-in cameras are a frowned upon topic among many customers with regard to data protection. Roborock knows this, which is why they assured us that they had found a comparatively secure solution for this problem. This solution is as follows:

xperience has shown that there are always “hackers” in various communities who will check such information carefully. This happened in the past, for example, with the Xiaomi Mi Robot. I can understand the scepticism in front of cameras very well, but I must say that I would have few problems with the solution as described here. In addition, the robot does not record videos or voices, which I would find much more delicate. But of course everybody has to make his own (attention word joke) picture of it.

Floor storage: Up to four virtual cards can be stored

Up to four floors can be stored and provided with ten no-go zones, ten non-wiping zones and ten virtual walls per floor. The maps are created using laser room measurement, as in the predecessor models. The virtual maps can then be called up in the app as usual.

It is quite conceivable that there will also be icons on the map for the small obstacles found during cleaning.

Compared to the previous models, the hardware has not changed much when looking at the technical data. Apart from the 25% stronger suction power in the new model – thus 2500 pa and leading on the Roborock scoreboard – the electric water tank should also be mentioned.

We already know it from the S5 Max: The amount of water that drips from the tank onto the microfiber cloth on the attached attachment can be adjusted in the app. So you can decide for yourself how much water you think is appropriate on the ground. There are two more positive points to mention: The water tank exerts a constant pressure of 300 g on the floor, which should compensate a little for the manual pressure of a human mop, although it will not be able to completely replace it. But for a superficial wipe this should be sufficient.

The second positive point: In the app, the selective room division allows you to specify when the robot should work in which order in which room. The S6 MaxV can switch the wipe function on and off. For example, the kitchen, living room and bedroom can be vacuumed first, and then wiped in a second pass. Roborock calls this “Room Sequence Cleaning“.

Areas that should not be wiped, for example a carpet, can be provided with non-wiping zones in the app.

Vacuum robots automatically return to their charging station when the battery level drops and recharge the battery there. If the charging station is not moved during cleaning, it is only a matter of seconds to find it again due to the built-in laser tower. Cheaper models often have the problem with large living areas that they cannot create all rooms in one go due to a low working time.

Higher-quality models, such as the S6 MaxV, master the continuous cleaning process. Thus, when they notice that the battery life is coming to an end, they notice that not everything has been done as desired. In this situation, they remember at which point in the four walls they have to leave work, drive to the charging station, charge the battery fully and continue cleaning at this point.

The highlight of the Roborock S6 MaxV: It does not fully charge the battery in such a situation. It may not sound smart at first, but it is much more profound: By scanning all rooms beforehand, the S6 MaxV knows how many m² it still has in front of it and calculates the required battery capacity. Then it drives to its docking station and charges the battery only by as much percent as it can handle the remaining space.

However, it is questionable who owns such large areas that this system might be necessary. Because the working time has never been higher with any model of the Chinese manufacturer: 3 h working time guarantees (at least on the lowest suction level) the cleaning of a living space of up to 250 m² according to Roborock. It is rather questionable how the dust chamber with a potential filling quantity of 0.46 l is supposed to play along.

Classification in the product range

Roborock is a guarantee for good technology in the vacuum robot market. It is not without reason that the Chinese act as ODM (Original Design Manufacturer) for the tech giant Xiaomi. The expectations for every new product are accordingly high. Here the model chronicle:

Think about all the functions you know from vacuum cleaners. And now put them all into one model, then you have the S6 MaxV. Roborock is holding the cards in its own hand, whether or not it will climb to the top of the podium of the best vacuum robots worldwide.

Roborock may have confused us a bit in the past with product names and upgrade models, but it also stands for getting things started properly and to a high quality standard. So it is quite conceivable that the new functions will also work well in practice, and the Reactive AI is still being worked on until the launch at the end of June.

It is currently not yet conceivable that the AI will work so well that we will never have to protect anything small in the household from the vacuum cleaner robot again, but this can always be improved by learning the robot. As nice as it would be, I guess we cannot expect perfection here yet.

With Roborock in the S6 MaxV running the full range of software available, the high launch price of around $700 comes as no surprise. We have to slowly say goodbye to the idea that technology from China is always cheap. Especially because China has long since overtaken top performers such as iRobot, Vorwerk or Dyson in the field of vacuum robots. Compared to the manufacturers mentioned, the S6 MaxV is still cheap, but it is the most expensive model from China so far. But if the functions are all as good as announced, after the sad payment you will have the best model 2020.

What are your thoughts about the Roborock S6 MaxV?