3 Kommentare April 22, 2020by Tim
Hey, guys! Just a heads up: The linked offer is already a bit older and the price of the gadget might have changed or it might not be available anymore.

The Roborock S6 Pure is available at Amazon.co.uk , Amazon.de and Amazon.es but unfortunately not yet at Amazon.com.

In addition to the company’s first cordless vacuum cleaner, the Roborock H6, the Chinese Xiaomi robot manufacturer is launching another product at CES 2020: a new version of the successful Roborock S6, nicknamed “Pure”. The new flagship model? We have tested what the new model is all about (spoiler: not much). 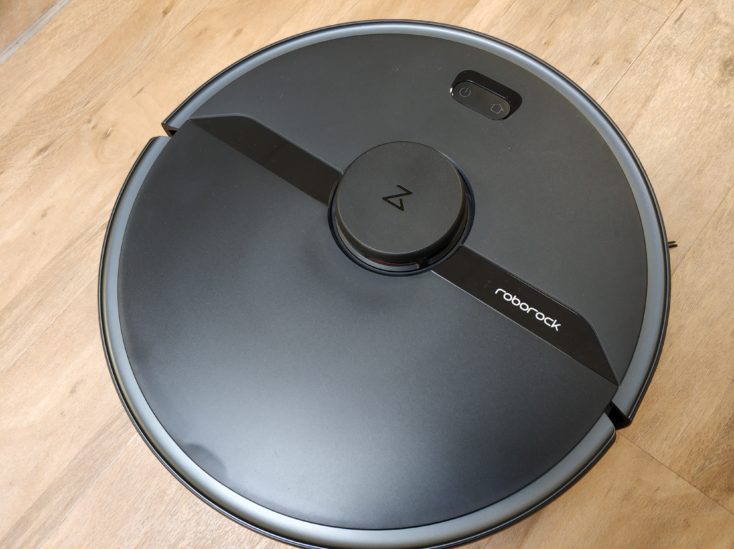 As the S6 Pure is extremely similar to its predecessor, the S6 S6 Pure, we will only highlight the differences between the two models in this article. Everything else (which is the same) can be found in the review of the Roborock S6.

First impression when comparing the technical data: What has been improved? One may be a little surprised here, apparently the solution can be found in the features. Both the S6 and the S6 Pure are available in black and white. Let’s go through the differences!

In the scope of delivery you will find except the robot:

The charging station of the S6 Pure is identical in construction to that of its predecessor, only in black instead of white. In the manual you will find quite useful tips on how to handle the individual parts, such as professional cleaning of the sensors etc. Also of interest is the overview for troubleshooting, where you can quickly find a solution for the robot dilemma by means of possible error codes.

From the manufacturer’s point of view, it is logical to follow a successful model like the S6 with another version. But what distinguishes the “Pure” from its predecessor? Visually, it can only be said that instead of three buttons, only two have been installed and a column to the right and left of the LDS tower, which is only interesting from a design point of view, has been added. Still no reason to buy.

Use the button on the left side to switch the vacuum robot on and off; start and stop it. It also displays the current charge status by changing the light.

That’s not the only trick with regard to the buttons. If you press the button with the house symbol in standby or pause mode, the robot cleans a 1.5 x 1.5 m square area around itself. After cleaning, the robot returns to the centre of the square – i.e. to where it started. Practical if you want to deliberately vacuum or wipe in one place. So Roborock has made two buttons out of three here by simply double-clicking the house button.

Apart from the matt black color and the attached column, there are no other conspicuous features in terms of design and workmanship compared to the predecessor. Visually, however, the Roborock S6 Pure really looks good, an extremely chic and modern looking model. And it looks anything but cheap thanks to the high-quality plastic used. But one can also expect from such an expensive robot.

In this review we only describe the differences between predecessor and successor, so this could be the most exciting part of the article. But it is not. The differences are marginal, almost irrelevant. But see even the short overview:

A mini innovation can be found after all in the minimally enlarged water tank with 180 ml capacity. We had expected that the next (upgrade) model would have an improved water tank with pump (adjustable water volume) like the S5 Max, but unfortunately this is not the case. The amount of water can be adjusted manually on the tank. To do this, you have to fold up the microfibre cloth for a short time.

Roborock vs. Xiaomi Home App: Which app should I use?

The S6 Pure can be used with both the Xiaomi Home App (Android, iOS) and the Roborock App (Android, iOS). The Roborock app is practical if you use individual China-Only devices (e.g. Xiaomi’s doorbell) in the Xiaomi Home App and can only select “Mainland China”. Since you don’t want to throw any devices out of your SmartHome system, you at least have a second app for your vacuum robot.

For the Roborock S6 Pure, there are no huge differences between the two apps. The interface is very similar, even though the Roborock app is generally tidier. 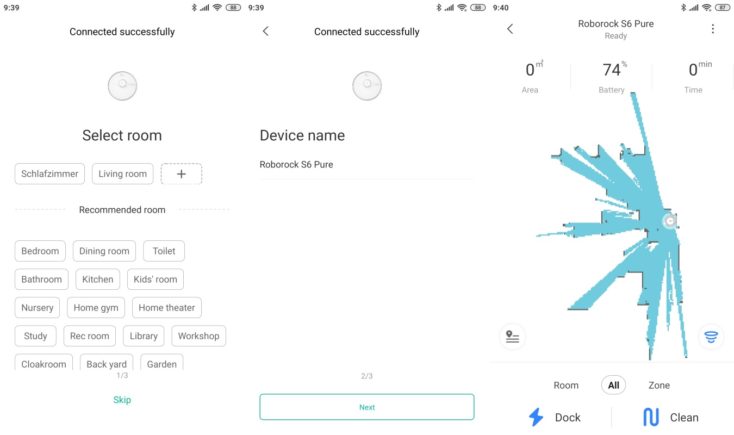 What’s annoying is that you can’t create a shortcut for your robot in Roborock, which means that you always have to open the app instead of quickly landing in the app via the shortcut. Moreover, within the Roborock app, only one user can be set up, thus the model cannot be shared with other accounts.

Even though the advantages and disadvantages listed here are only a snapshot, which can change immediately with every update, I still tend to the Xiaomi App. The Roborock app is a good alternative or additional app, but the general rule here is: “Never change a running system”. Xiaomi puts a lot more heart and soul into reworking the app, even if it is a bit overloaded. On the other hand, you know where you stand for years and usually don’t have any problems.

Roborock will launch the S6 Pure in the second quarter of 2020 for $549. This is a bit cheaper than the entry price of the Roborock S6. It is possible that the price will make the model interesting in the long term. From a technical point of view, this model is rather boring, not only for vacuum robot testers.

Roborock has built up a very good reputation over the last few years, so I find it all the more difficult to understand the company’s product policy that there are several lite / upgrade / model versions on the market for which no one has asked for. This tends to cause confusion among consumers from my point of view. So the S6 Pure is another not quite comprehensible step, which is obviously worthwhile for the company in terms of sales, another explanation for this is not available to me here. From my point of view a model that the world does not need.

Are you of a different opinion? What do you think of the S6 Pure?