5 Kommentare March 23, 2021by Tim
Hey, guys! Just a heads up: The linked offer is already a bit older and the price of the gadget might have changed or it might not be available anymore.

Roidmi is known as a premium manufacturer of battery vacuums like the NEX 2 Pro from Xiaomi’s ecosystem. The step towards the first own vacuum robot is a logical one. With the EVE Plus, Roidmi goes straight for the latest technologies and features. 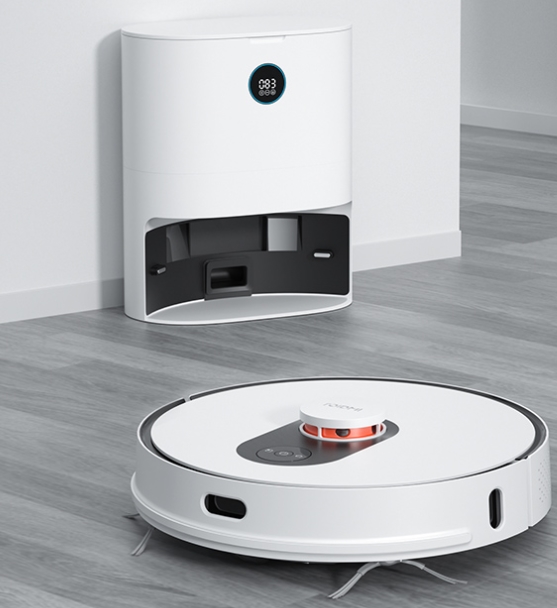 To the top with the extraction station?

The American manufacturer iRobot dominates the market with extraction stations, but it also costs a lot. Meanwhile, the top dog in this field is getting more and more competition from the Middle Kingdom. Ecovacs, Proscenic, Viomi… meanwhile, most manufacturers have an extraction station in their program or offer it as an option. Functionally, they all differ only marginally, but some at least have a display, like the Roidmi EVE.

Extraction stations are charging stations and “emptiers” of the dust chamber in one – automated. When the robot drives to the station after its cleaning, the battery is charged and the contents are sucked out of the dust chamber. The whole procedure can reach a volume of 80-90 dB, which most people consider “unpleasantly loud”. For comparison, we humans converse at an average volume of 60 dB.

Despite the top-mounted display, this extraction station won’t offer much more options than other extraction stations either, but simply looks more visually appealing as a result and offers one or two pieces of information, such as battery level. The 3-liter potential bag capacity, which you then have to replace after about 30 cleanings, is also average.

The pre-sale price of around $400 is almost ridiculously low for a robot with a station like this, so what’s the catch or is the price still going up? Let’s take a look at the other features of the first Roidmi robot.

For a long time, we puzzled over why Roidmi developed an app specifically for this purpose, when they only made battery vacuum cleaners. Now, however, it seems like wise foresight: The Roidmi EVE can be integrated into the in-house app Roidmi Cleaner (Android, iOS) in addition to the Xiaomi Home App (Android, iOS) that we are well familiar with. Those who already own a few devices from the Xiaomi universe will have already integrated quite a bit in the Xiaomi Home app, which is likely to make more people opt for the Xiaomi Home app. Unless, of course, the Roidmi app offers more features.

The fact that a virtual map of the premises can be accessed and used in the app is related to the laser spatial measurement using the laser distance sensor (LDS). This is the most precise type of navigation, but it also works differently in gradations depending on the LDS.

It is not possible to say exactly whether Roidmi developed the EVE Plus itself, often the manufacturer Roborock is behind Xiaomi’s vacuum robots. However, it can be assumed that the LDS comes from the Xiaomi/Roborock factory and accordingly the laser room measurement should also work well. Unlike the Xiaomi and Roborock models, however, it works with two rotating brush heads on the bottom.

A total of 18 sensors are installed in the new Roidmi; however, there is nothing about an automatic carpet detection (and that would be it if available). But there is mention of continued cleaning. When the Roidmi EVE Plus detects that the battery is running low (usually at 20%), it autonomously returns to the charging station, recharges the battery and continues cleaning at the spot where it last worked. There is no exact information on the working time (yet), but this smart feature definitely makes the EVE Plus suitable for premises above 250 m². 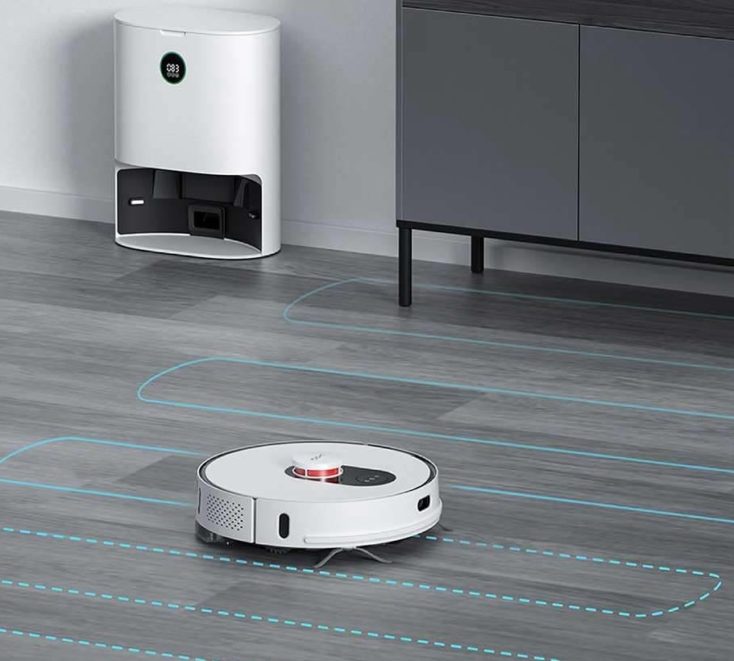 The EVE Plus can vacuum and mop at the same time. For this purpose, an attachment with a microfiber cloth is attached to the underside of the electric water tank. The robot automatically recognizes that it should mop. The amount of water that drips from the 0.3-liter water tank onto the cloth can be set in the app in increments (presumably low, medium, high).

It stands and falls with the price, which does not seem to be completely clear at the moment, after all, there is only a pre-sale price of around $400 at Geekbuying so far. If this remains, the Roidmi EVE Plus with extraction station is a highly exciting price-performance device. Unfortunately, we also know from experience how pre-sales are and that the starting price tends to go up. The EVE Plus is definitely interesting, but it lacks the aha effect, the unique selling proposition, the innovation. Where is a new exciting feature? You’ve already seen everything somewhere that you see here on the Roidmi.

Sure, the most important features of high-priced models like selective room division and the electric water tank are included, but is that enough to secure a firm place in the market? As of now, it lacks the buying appeal – at least in my opinion. After all, extraction stations are no longer a highlight at the end of 2020.

Do you like the fact that Roidmi is now also involved in vacuum robots?