2 Kommentare March 1, 2019by Thorben
Hey, guys! Just a heads up: The linked offer is already a bit older and the price of the gadget might have changed or it might not be available anymore.

At the Mobile World Congress 2019 two topics were particularly present: 5G and foldable smartphones. Huawei and Samsung stole a bit of the show from what was actually the world’s first foldable smartphone, even though the Huawei Mate X and Samsung Galaxy Fold could not even be taken in hand. That looked different with the Royole FlexPai. At the booth we were allowed to take the device extensively in our hands, fold it and take photos. But of course only under supervision. 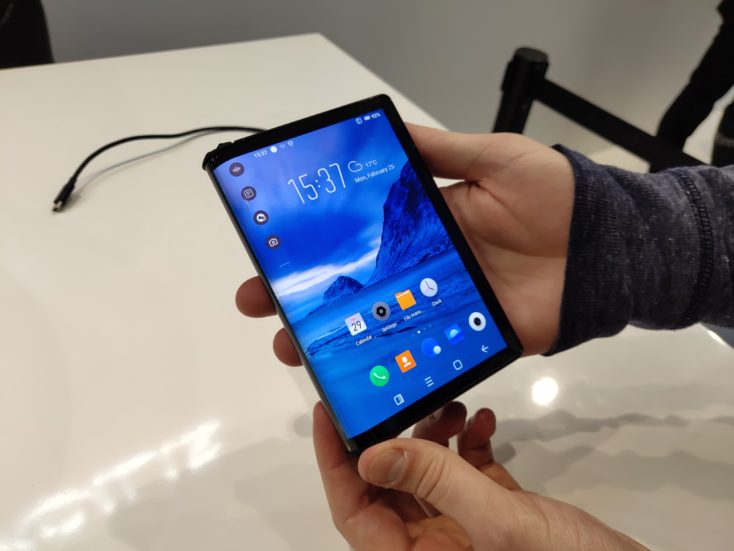 In general you can say that the foldable display works and that it felt successful but not quite finished yet. This was especially seen with the software, which unfortunately hasn’t yet been optimized too well for this new technology. The closing mechanism also works only via the integrated magnets, otherwise the two sides would not “close” completely.

What do you think of the current foldable smartphones? Is it really a convincing concept for you or rather a solution to a problem that doesn’t actually exist?

Smartphone manufacturers are currently trying out a wide variety of concepts. After the notch and the hole in the display as in the Honor View 20, Royole’s FlexPai will be the world’s first foldable smartphone. Is this flexibility the way to success? 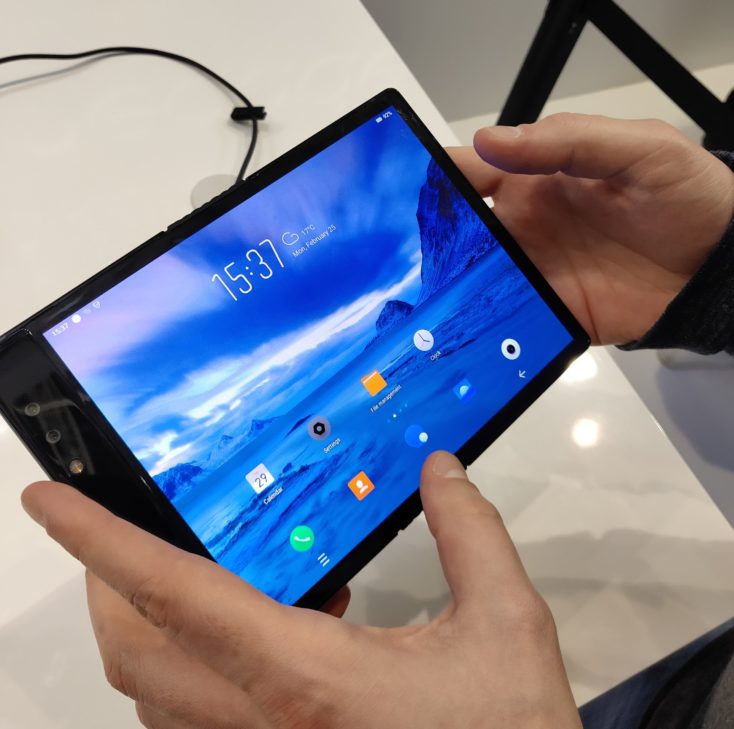 Admittedly, the Flexpai of the manufacturer Royole is not brand new. In fact, a prototype was presented in Beijing at the end of October. However, since the presentation showed the weaknesses of this concept rather than its strengths, we decided to wait with a report. It is now clear that the FlexPai is already being shipped. And that’s when Qualcomm’s new top CPU comes onto the market. But first to the design.

The concept of FlexPai is to combine two gadgets in one. “FlexPai= Smartphone – Tablet”, says the manufacturer’s website. This is solved by Royole by giving the FlexPai a 7.8 inch AMOLED display with a resolution of 1920 x 1440p. It has an aspect ratio of 4:3. As the name suggests, this panel is so flexible that it can be folded. So if you don’t need the full size, you can simply fold the tablet into a smartphone. Besides the flexibility, the robustness of the display is also an enomer advantage. It might be difficult to destroy this display. For quality control, the manufacturer has probably bent the display over 200,000 times, without consequential damage.

When folded, the display is of course correspondingly smaller, but it is possible to activate both sides of the display (i.e. back and front). This works for example in camera mode. A disadvantage is, of course, that the FlexPai is quite thick in smartphone mode. How thick, of course, the manufacturer does not reveal. In tablet mode the thickness is 7.6 mm, the height 13.4 cm and the width 19 cm. With a weight of 320 g, the FlexPai is slightly lighter than the Xiaomi Mi Pad 4. 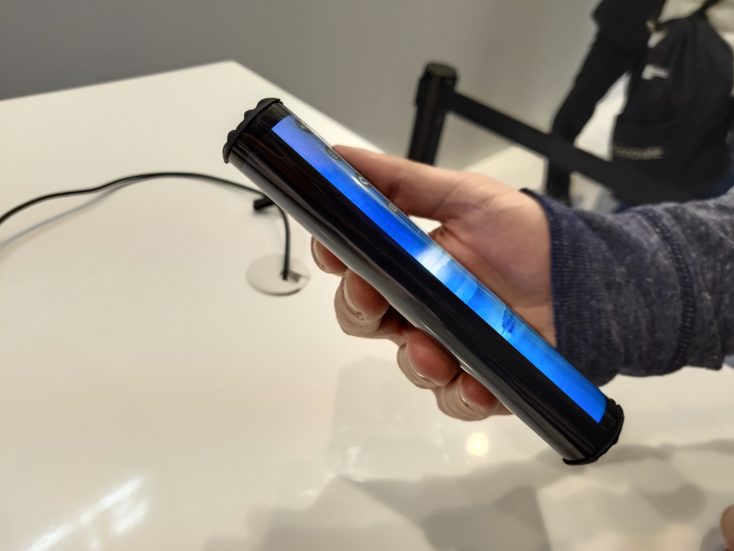 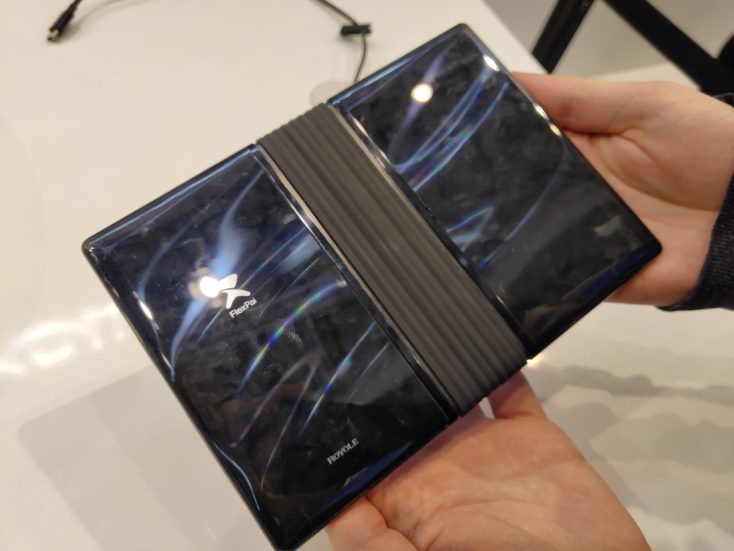 Looking at the photos of the FlexPai, one notices that the two sides of the device are not neatly placed on each other in smartphone mode. At the edge where the FlexPai is bent, the device is of course thickest. The FlexPai only really rests on the ends.

Before Samsung with Snapdragon 855

As if that weren’t enough to attract attention, Royole manages to convince with the FlexPai inside as well. As the first smartphone manufacturer worldwide they use the brand new Snapdragon 855 processor in the FlexPai. This was supposed to be reserved for Samsung, but the unknown company beat the Korean tech giant. The Octa-Core processor with 2.8 GHz clock frequency will be the new flagship processor for 2019, which we will also see in a possible S-version of the Xiaomi Mi Mix 3! 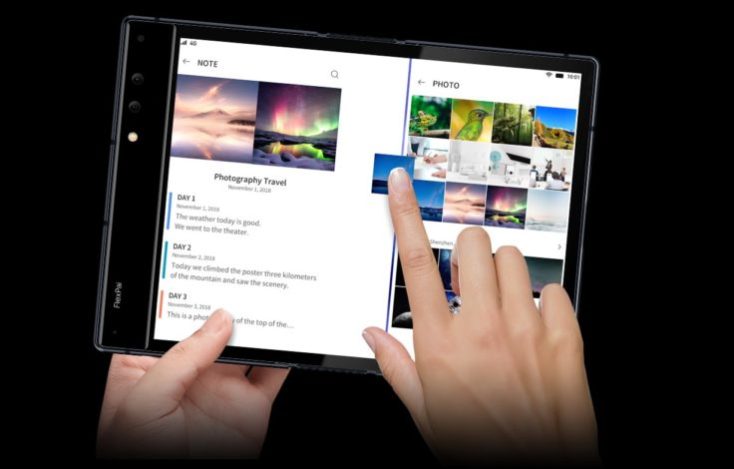 In addition, there is a choice of 6 or 8 GB RAM and 128 GB or 256 GB internal memory. There will also be a microSD slot for expansion. But we are a bit critical about the battery. With a capacity of 3800 mAh, that’s pretty tight in our eyes, at least for a tablet. According to our experience, the FlexPai will have to be plugged in every evening.

As was to be expected, one first concentrates on the Asian market. This can be seen from the fact that many LTE bands are not available. At least there is USB type C and a dual SIM slot. GPS, A-GPS, Bluetooth and WiFi are of course available, but there is no 3.5 mm jack connection.

Such a hardware needs of course also the suitable software! Royole installs Water OS. The name is supposed to symbolize that the transition between smartphone and tablet is “fluid”. Whether this will be the case in practice would have to be tested first. Especially since you can also use a split screen, the FlexPai should also be suitable for office tasks. The display also offers an enormous advantage for gaming.

You might already be able to imagine that the FlexPai is not quite so affordable. The release price of about $1300 is very steep, the 256 GB version even costs $1449.

What’s impressive is that Qualcomm puts so much trust in the company – or Royole puts so much money into Qualcomm, who knows. However, the presentation of the prototype on the Internet was more laughing than enthusiastic. That’s because it doesn’t seem really mature yet. We also saw this on site at MWC 2019 in Barcelona. For the same money you could also buy a Xiaomi Mi 9, a Xiaomi Mi Pad 4 and a Teclast F5 laptop and would have only spent more than half.

What do you think of the FlexPai? Can the concept convince you?