4 Kommentare October 21, 2018 by Maike
Hey, guys! Just a heads up: The linked offer is already a bit older and the price of the gadget might have changed or it might not be available anymore.

The Ryze Tello was developed by RYZE Tech, but in cooperation with DJI (and Intel), and is also listed in the shop of the Chinese manufacturer. Externally it resembles the Spark and Mavic Air, but is much cheaper. Here you can find out what you get for this “savings price”. Ryze Tech is also a Chinese company based in Shenzhen, and developed the drone in cooperation with the industry leader DJI. Their experiences have obviously been used, because in the Tello you can find some features that you wouldn’t necessarily expect in this price class. By the way, Intel was also involved in the development and provides the processor built into the drone.

At first sight, you might think of the Tello as a small Spark. The arms and body in dark grey and the white hood are simply associated with the small DJI drone; the Mavic Air also copies this style. The Tello looks good and also the workmanship is impeccable. The material feels high-quality, nothing wobbles, there are hardly any gaps. With a length of only 10 cm it is the smallest drone by DJI so far, even the Spark is big.

The four Prop-Guards are already mounted at the beginning, but can be removed. Below the motors there are hard rubber feet. Micro-USB connection right, power button left, battery compartment back and camera front; this summarizes the other details. 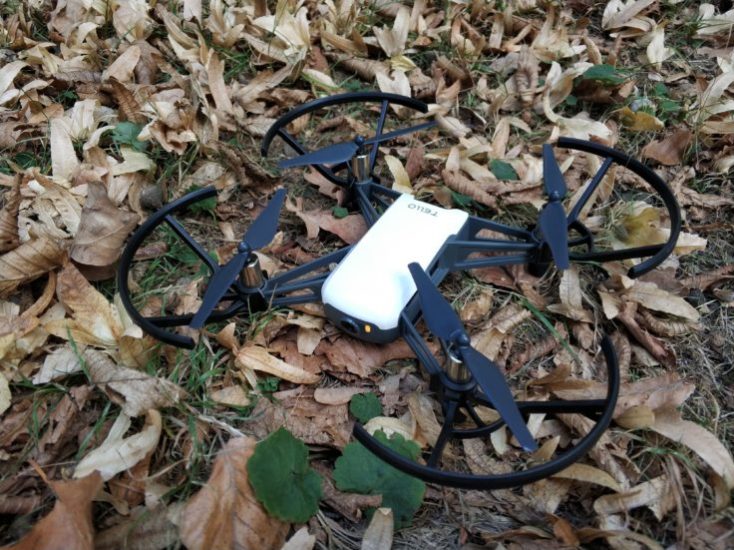 Functions of the Tello

There is an automatic take-off and landing function; you can even launch the drone from a stretched out hand. All in all, the fun of flying and a simple operability should be clearly in the foreground here. Beginners and children are expressly addressed. So the drone also controls rollovers (Spark and Mavic Air can not) and is programmable as a special feature with Scratch or Tello SDK.

When it comes to flying fun, the Tello. Seldom has a drone with smartphone control felt so good. The inputs are well implemented, the automatic altitude control even works very well and keeps the altitude accurate to a few centimetres. Only the short “braking distance” of the drone is noticeable. If you stop the input, it only slows down briefly and comes to a halt after a short distance. But you quickly get used to it.

There are two speed modes, of which the faster one brings the drone up to 28 km/h. The flight time is 13 minutes. The flight duration is given as 13 minutes. As always, this is a very optimistic value, but 11 minutes can be achieved without any problems. If you want, you can buy extra batteries and fly and photograph even longer in one piece.

There is a 720p camera that transmits images directly to a smartphone with an app installed. The range of the transmission should be 100 m, just as far as the drone should be able to fly with (optional) remote control. But it has to be said that this range will probably not be exhausted. The Ryze Tello is (as we will see) above all a drone for photos that will not be taken from too great a distance. The range of the WLAN connection to the mobile phone is usually sufficient. 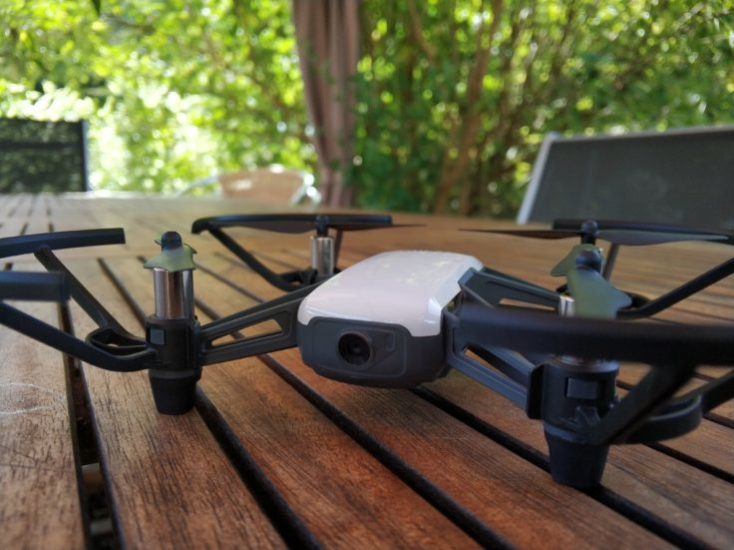 The videos that the camera makes are unfortunately at most average. Although there is electronic image stabilisation (EIS), the images shake quickly when the drone moves. Since there is no gimbal, but the drone flies comparatively fast, this looks particularly unpleasant when accelerating and braking. In fast forward flight, the drone almost always films diagonally downwards. When the drone is at a standstill or moving very slowly, this is just how it works.

In addition to manual recording, there are also a few automatic modes for filming. For example, the Ryze Tello can make a 360° rotation lasting about 20 seconds while filming (see video). This is exactly how it can circle around a central point. Nice functions that also work very well, but unfortunately also produce shaky shots. In addition, unlike with the Mitu drone, the recordings are not stored on the drone itself, but only on the smartphone. Depending on the signal strength during transmission, the quality suffers additionally.

The photos taken with the camera, on the other hand, look really good. Especially because you can quickly unpack and start the drone, it is suitable for snapshots on the road or on holiday. 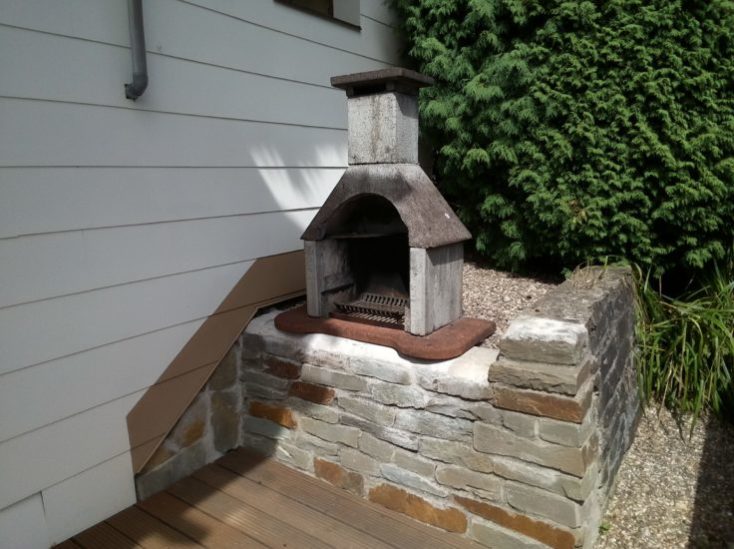 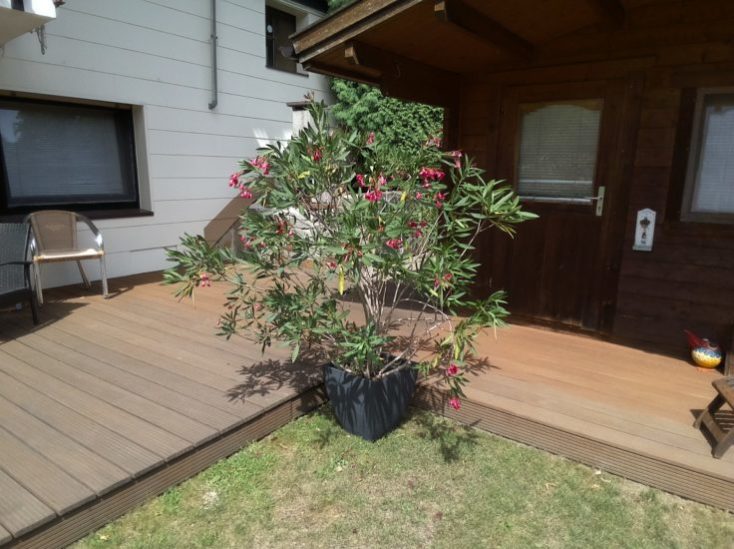 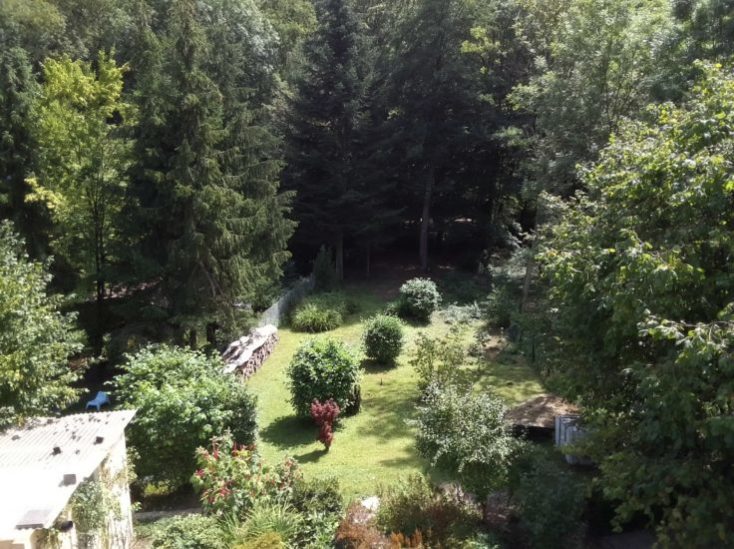 The app is called Tello; you can find it in the Playstore and the App Store. Simply scan the QR code in the guide and you will be taken directly to the download page. You’ll need to register the drone when you start it for the first time, but that’s largely automatic when you connect to the WLAN. 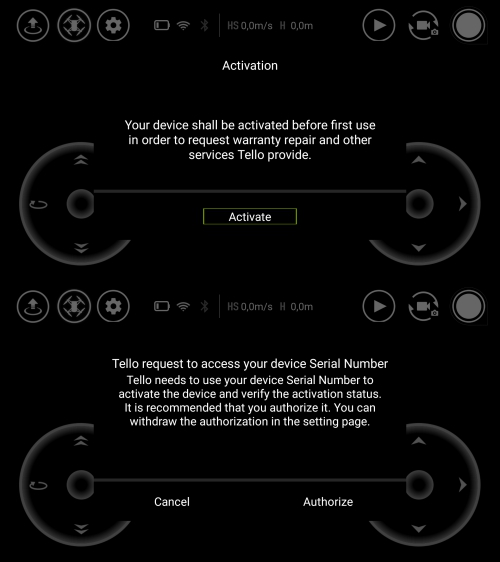 The interface shows you as usual the two sticks with which you control the drone, as well as important information at the top of the screen. The battery level, the strength of the WLAN connection and whether you have activated Bluetooth will be displayed, as well as the speed and altitude.

The buttons from left to right are: Otherwise the app lets you make all kinds of settings. There is also a “beginner’s guide” which explains the basic controls in a short tutorial.

Alternatively, the Tello can also be operated with a Bluetooth remote control. Ryze sells this model for $33 on Amazon.

With $99 the price of the Tello is comparatively affordable, although it is not a video drone and can not be compared to the DJI Spark. Similar is the Xiaomi Mitu Drone, which has the same camera. However, both drones have their advantages and disadvantages. Here it is the missing onboard memory as well as the very restless videos.

Different design, but similar features: RYZE Tello and Xiaomi Mitu
I like the Tello’s control and the photos very much, though. The battery is also a bit more durable than Xiaomi, and spare parts such as another battery from DJI are easier to get. But the biggest advantage in my eyes is that the WiFi frequency of the drone can also be found by all common smartphones. With Xiaomis version there are still problems.

So anyone looking for an easy-to-use selfie drone with many functions will be happy with the Ryze Tello.