Driving armchair from Segway – Is the Hoverchair coming?

6 Kommentare January 8, 2020by Jens
Hey, guys! Just a heads up: The linked offer is already a bit older and the price of the gadget might have changed or it might not be available anymore.

Segway has been known to a large part of the (technically interested) population since the production of the balance vehicle of the same name. China gadget readers have also long known that the US company has been part of the Chinese company Ninebot since 2015. In the course of the CES, the S-Pod, a moving armchair, has now been introduced, which many reporters compare to the floating seats from Pixar’s Wall-E. 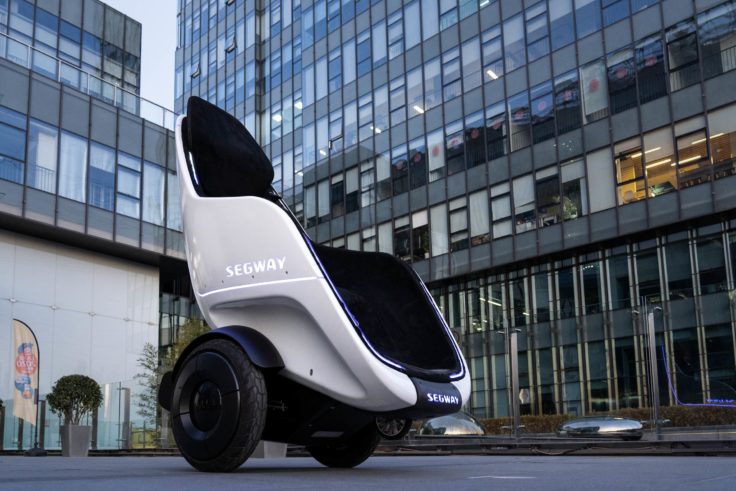 In a way, the S-Pod, as the vehicle is called, resembles the original “Segway”. Two wheels on a self-balancing vehicle, except that the driver is not standing but sitting. And in fact, one must speak of an armchair rather than a chair, because although the rider is almost sitting upright, he can still lean back comfortably. For the first time, the vehicle is not controlled by shifting body weight, but with a small joystick that is operated by hand.

However, the technology is the same as for other Segway models. In order not to tip over when the chair is switched off, it has two “support wheels” at the back (and another one at the front). Leaning slightly backwards, you can also get in and out easily. Furthermore, the S-Pod can be moved (pushed) even when it is not switched on.

So far there are no details about the performance or range, nor the price of the new vehicle. You will need a strong motor and a sufficiently large battery to move the S-Pod over long distances. Whether it is really suitable for road traffic in the end is doubtful, though. It is more likely to be used for transportation in large office buildings or at airports.

Basically, one has to ask where the necessity for this vehicle is. Physically handicapped persons certainly benefit from a comfortable and easy transport possibility, but there are also comparable wheelchairs that do not need to keep themselves in balance. Furthermore, compared to other vehicles, the S-Pod simply invites comfort. So the comparison with Wall-E is appropriate again. Or how do you see it?

The price should probably be in the lower to middle four-digit range, so the S-Pod should not be a real option for most people anyway, especially in the initial phase. And there is still the possibility that it will not make it beyond the status of a concept car. Segway will hopefully announce more information during CES.