0 Kommentare January 21, 2022by Jens
Hey, guys! Just a heads up: The linked offer is already a bit older and the price of the gadget might have changed or it might not be available anymore.

A few years ago, so-called air couches suddenly appeared in the summer. The idea: space-saving and easy-to-transport seating and lounging options for outdoors. While filling with air still had to be done “by hand,” this model, which is currently being crowdfunded, fills up all by itself. 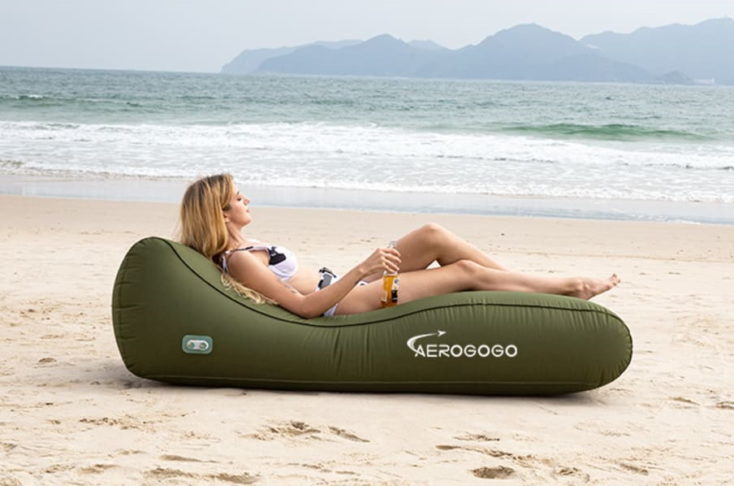 Air couch, but in electric

It was both the advantage of air couches and a sticking point: filling with air. Hold the bag spread out with both hands, hold the opening open and turn it around a few times. What looked simple in the advertising led to some very entertaining attempts in practice.

To simplify this, this model called Aerogogo PS1 has a built-in air pump. At the push of a button, the couch is automatically filled with air in under 100 seconds. Granted, once you got the hang of the air couches, you could set them up in a matter of seconds. However, if you’ve scheduled a day at the park or swimming lake, you’ll have the two minutes to set it up as well.

The shape of the Aerogogo PS1 is also somewhat different. The couch is slightly longer and especially wider. There is also a back or neck rest. The legs are also slightly higher, or the buttocks lower. The multi-layered outer skin is waterproof and should also be reasonably protected from scratches. On sharp stones and all too rough ground I would probably still not use it to be on the safe side.

Everything can be conveniently stowed in a small carrier bag. It looks a bit like a gym bag. You probably have to stuff it a bit, but that was already the case with the previous air sofas.

Since the air pump is electrically operated, it must of course be charged. There is a small USB-A port right next to it for this purpose. By the way, the electronics “only” have an IP34 rating, which means they are protected against splashing water. If you want to take the mattress into water, you have to be careful, as the pump could be damaged.

Probably fails because of the price

In itself, all of this sounds quite nice, until you look at the price. One of the couches costs just under $120, as is not unusual on Indiegogo, you can also buy several at once (or support the project, a classic purchase is not). When the air couches were new, they also cost up to $60, but then quickly fell in price after there were hundreds of suppliers. You can get many models for less than $20.

The couch can be so ergonomic and practical, a price of $119 makes it a luxury product. For the fewest, it will be worth it. Personally, I never had problems with the filling of the air sofas and found the swirling around, which sometimes looked silly, somehow charming. Sure, an integrated pump like that is a nice touch, but I’d rather pump by hand for a few minutes. Would be interested to hear if any of you think differently. Feel free to let us know in the comments.