0 Kommentare February 25, 2020by Thorben
Hey, guys! Just a heads up: The linked offer is already a bit older and the price of the gadget might have changed or it might not be available anymore.

If there is one thing we hear about new smartphones, it is the complaint about the size beyond the 6″ limit. The manufacturer Servo, from whom we already know a mobile phone pen, provides the answer: the Servo S10 Pro is hardly larger than a credit card without sacrificing modern standards – finally! 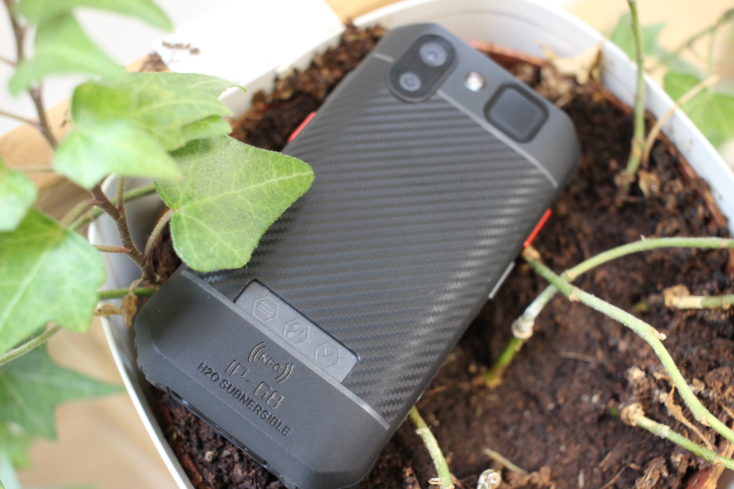 Brevity is the spice

The Servo S10 Pro looks like an outdoor smartphone at first glance, but is really small, at least by today’s standards. The 3 inch display dictates the size. Borderless is something else, though. On top and bottom you can see thick screen borders, on the bottom there are even three capacitive, “physical” buttons for operation, so that they don’t take up space on the already small 3″ display. Thus, we arrive at dimensions of 9.78 x 5.14 x 1.6 cm, which we can also confirm from the manufacturer. The weight of 108.6 g also reminds of old cell phones. Thus, it is actually lighter and somewhat smaller than the legendary Nokia 3310! 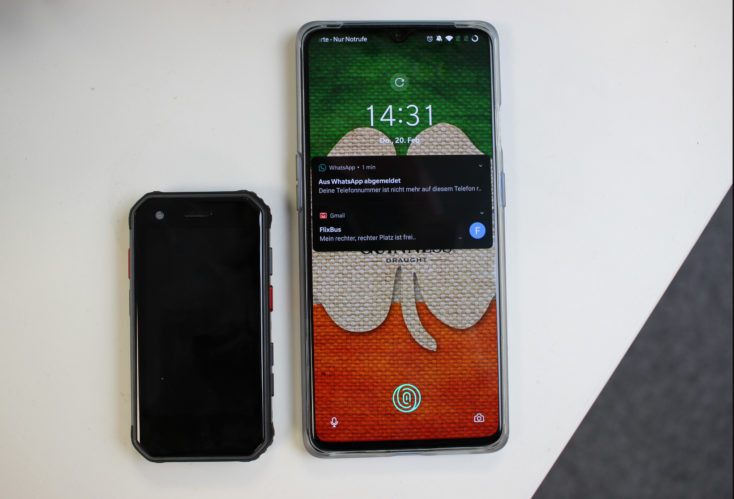 On the upper side is the ear cup and the front camera. The mentioned outdoor look results from the thick plastic edge with notches on all four corners as well as the relatively thick buttons and screws. On the right side there is the power button, the volume rocker and even an SOS button. On the left side there is the SIM slot, a camera button and a red push-to-talk button. The USB-C port on the bottom is closed with a rubber cover. 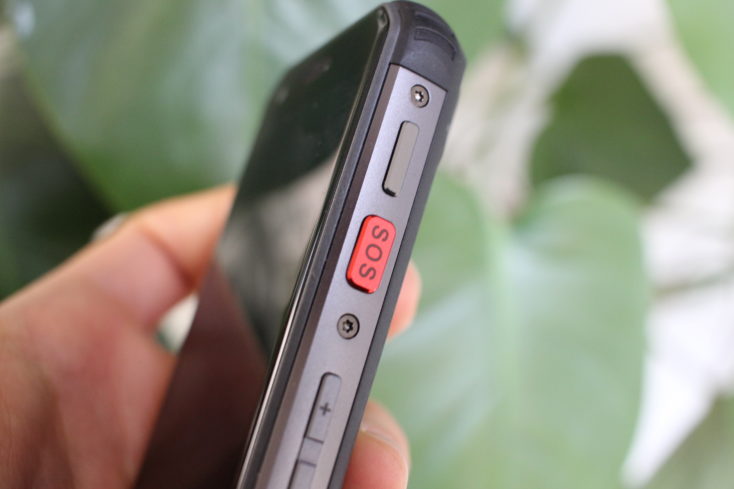 On the back we get a mix of carbon-look and grey cross-stripes. Besides the dual camera, the unusual positioning of the fingerprint sensor in the upper left corner is also noticeable. This works surprisingly well and reliably, but unlocking the phone takes a good second. 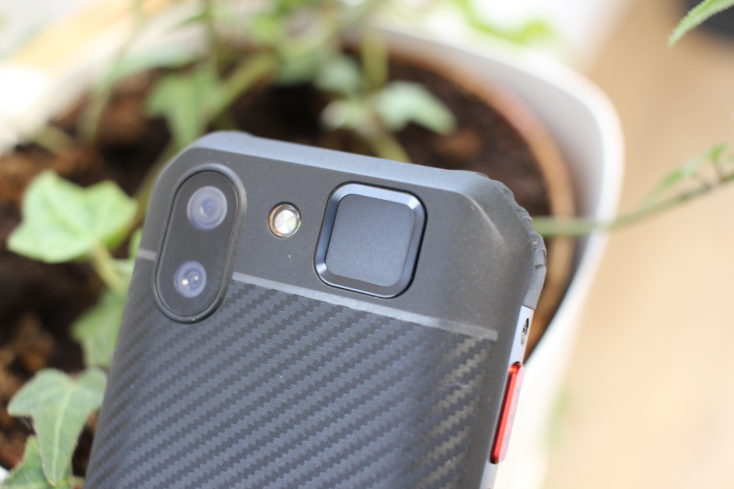 Unfortunately not waterproof at all

At the bottom of the back of the unit is also a reference to the IP68 rating. The S10 Pro servo should therefore be waterproof and also dustproof up to 1m. However, our water test was not successful, and the S10 Pro suffered permanent damage. The water has collected behind the front camera, which means that it can only be used with a “fog effect”. Unfortunately, the touchscreen hardly reacts at all and a water veil can be seen. We’ll wait and see if this disappears after some drying. 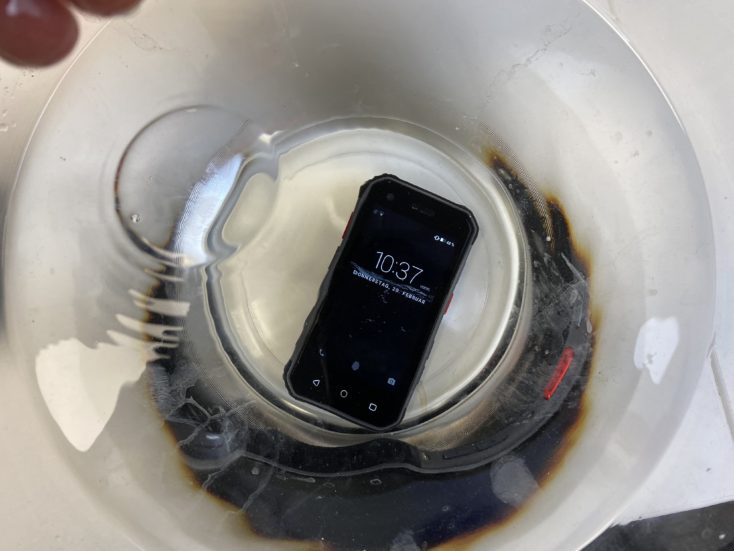 But why we then advertise with IP 68 is a mystery to us. This does not exactly help us to trust the specifications of (Chinese) manufacturers and leaves a bland aftertaste. 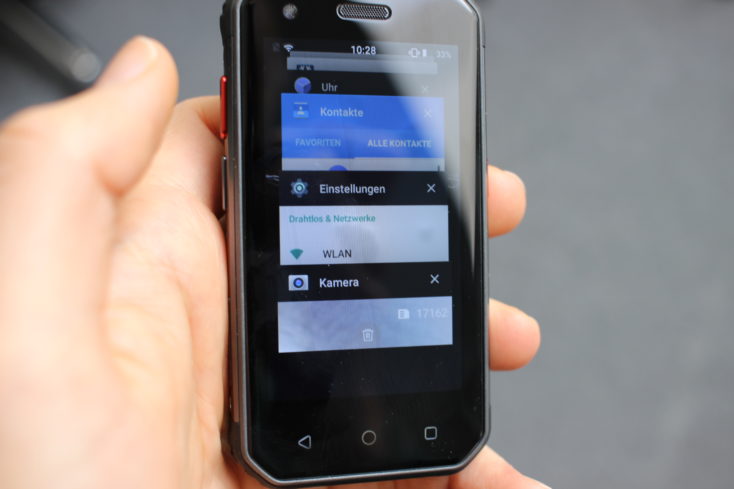 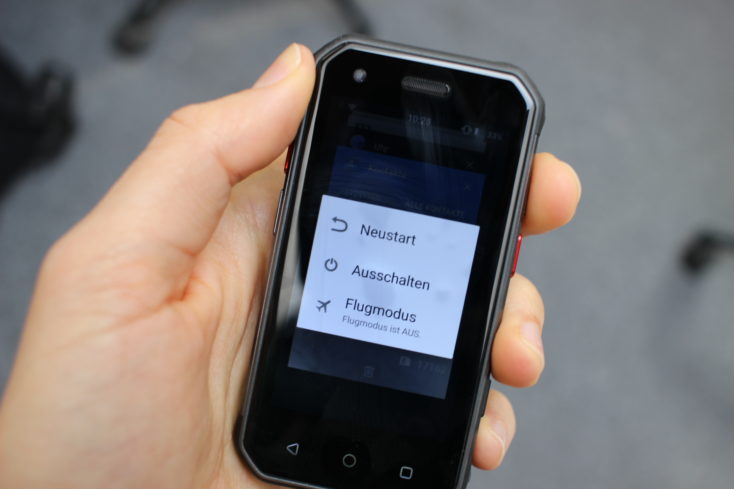 At least resistant to falling

We really didn’t treat the S10 Pro servo like a raw egg and threw it around, it even survived a few falls from a height of 1.50m without problems. This does not mean that we recommend doing this regularly – but if it does fall, nothing should happen. The lack of functionality is not due to the falls, but to the water that has penetrated. 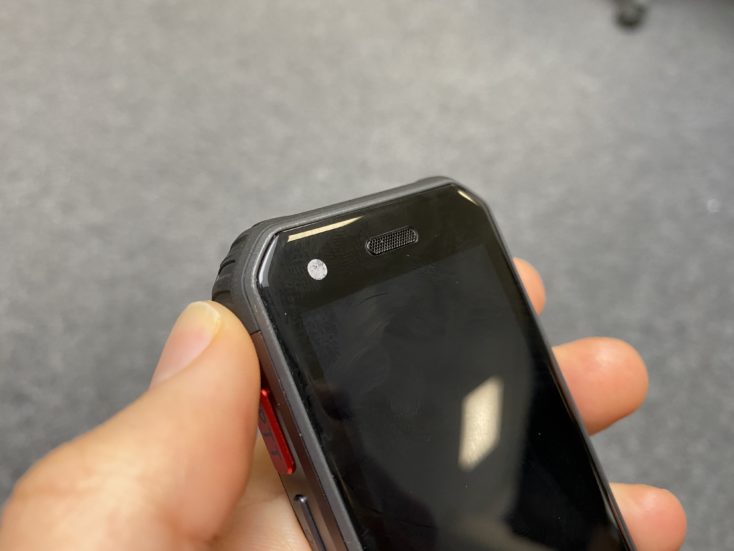 You can’t expect a Full HD+ resolution from a 3 inch display. However, the 854 x 480 pixels still provide a pixel density of 326 ppi, which is theoretically below average, but still “okay”. The Xiaomi Mi A3, for example, has a lower pixel density. Of course, an IPS panel with multi-touch touchscreen is used here. The pure display quality is even better than expected! The brightness is sufficient in most situations on a medium setting, the functionality is also good thanks to multi-touch. Inputs are usually implemented precisely, even if you type wrong noticeably more often than on a regular smartphone. 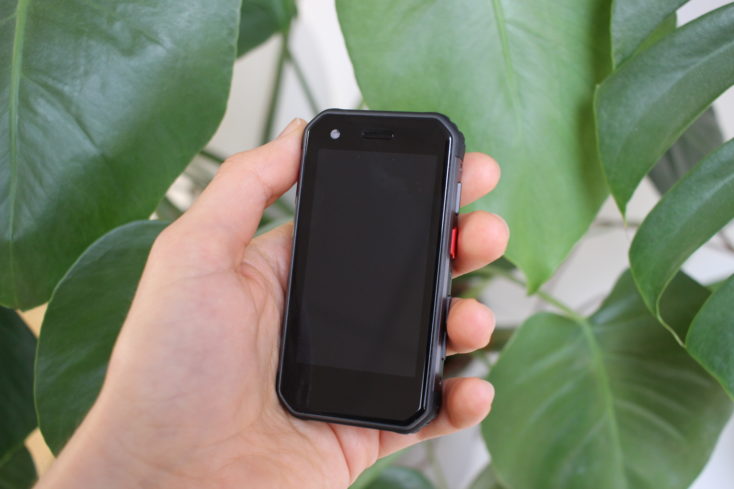 But the pure operating system does not leave many setting possibilities, which is not least because of the IPS LCD panel. The screen is also surprisingly sharp and feels like a real smartphone screen. It was to be expected that you would not get a flagship smartphone for a good $100 here. The MediaTek MT6737 quad-core processor still pisses us off a bit, as the SoC has been on the market since 2016. Therefore, the future viability is hard to estimate, after all, it supports LTE and 1080p recordings. But the speed isn’t even on the level of a Redmi 8A. In addition, there is 3 GB RAM and 32 GB mass storage, which can be expanded via microSD card.

In some situations the S10 Pro puts its own patience to the test, opening the freshly executed benchmark takes about 15 seconds. But these are exceptions, the pre-installed apps open relatively quickly, even in the camera there isn’t a big lag noticeable. This actually surprised us. The low power is rather noticeable in the animations, when e.g. a YouTube video starts or you have some apps open in multitasking. We also couldn’t resist playing a round of Draw Climber, which worked relatively well. But even in such small games you have to expect slight frame rate drops.

A dual camera has also been integrated, whereby only the 13 MP main sensor with ƒ/1.8 aperture is relevant, the secondary sensor unfortunately brings no added value. This is apparently only integrated as a gimmick for the optics. There is no portrait mode or optical zoom. The range of functions is correspondingly small, at least video recording, panoramas and release through gestures are supported. 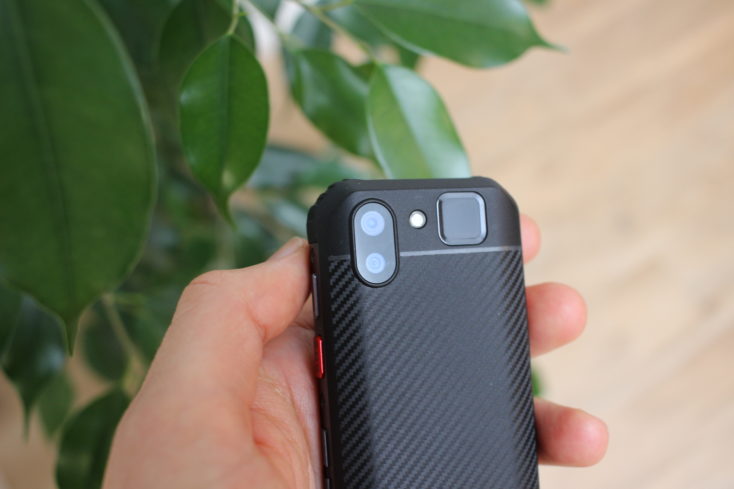 We were pleasantly surprised that we actually didn’t expect anything from the camera. I usually like the results better under artificial lighting conditions, everything looks more natural, the exposure is right and the skin tones are well done. In daylight the colors are a little off, green fades and becomes slightly yellowish. There is also a great lack of details, zoom-ins thank you with very grainy mud. For videos this is not much better, but the shots are quite useful. A Redmi 8A takes much better pictures, but the bottom line is that all is still acceptable. 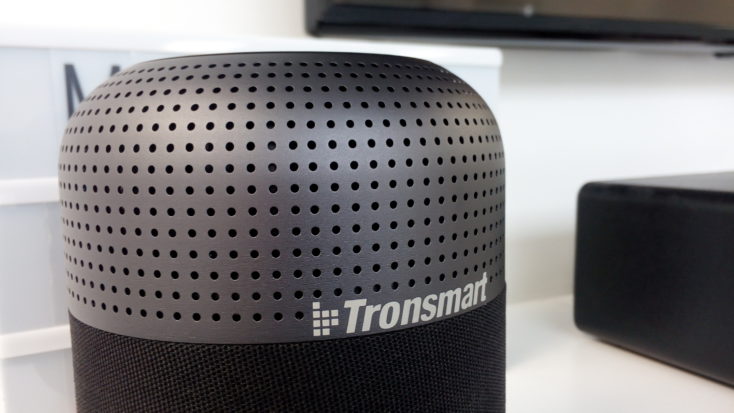 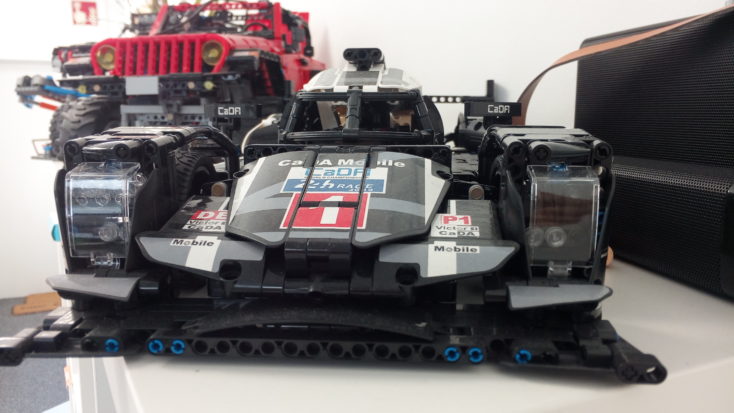 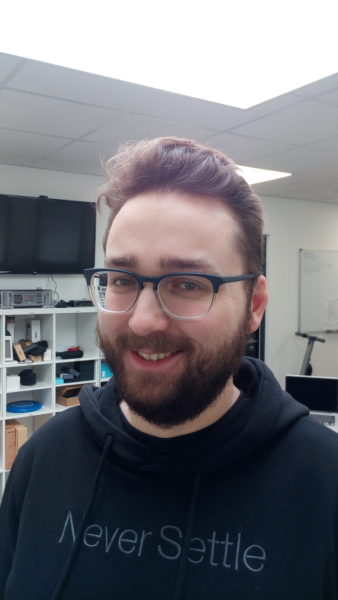 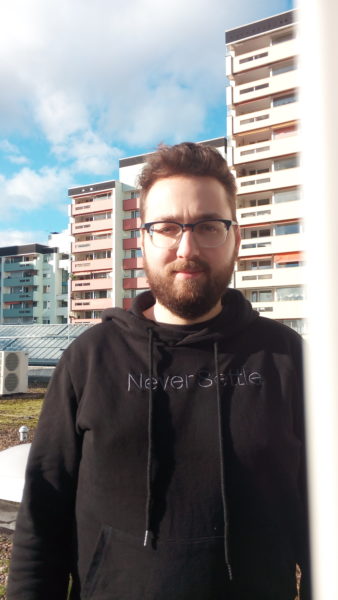 A 5 MP sensor is located on the front panel. It is noticeably worse than the rear camera and doesn’t meet current standards, but it’s certainly enough for a quick selfie. Partly, there is also an unfathomable, grey stripe on the underside in the pictures, as can be seen here in the picture. 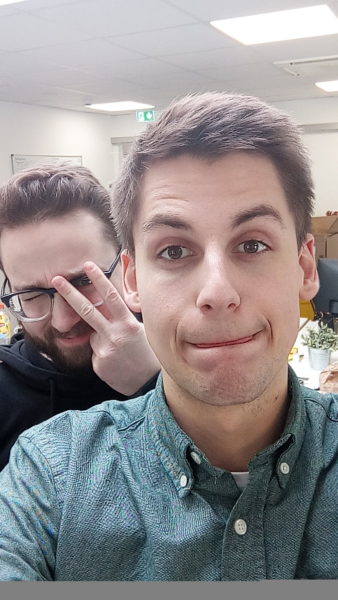 Nothing for a long excursion

The battery turns out quite satisfactorily large with 1,800 mAh, but the runtime is clearly worse than we initially expected. We barely get through the day with a fully charged battery, the drain in standby is also high. In the battery benchmark, the S10 Pro servo has reached a value of 5:30 h, which is below average to poor. In two to three days, the battery drained itself almost completely without any activity on the mobile phone. Unfortunately it is difficult to determine exactly why, as the combination of old hardware and software simply cannot keep up with current standards. 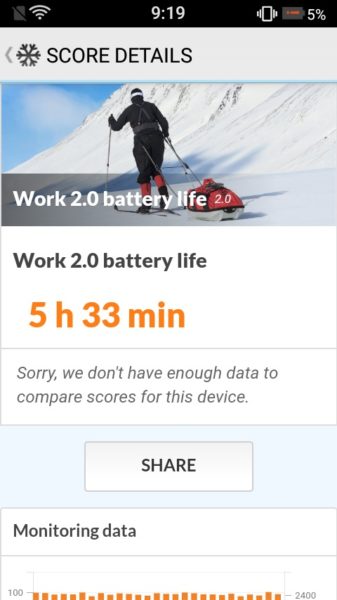 On the other hand, we are actually surprised that the S10 Pro servo is even charged via USB type C – not bad. A complete charge, however, unfortunately takes several hours.

The strength of an outdoor smartphone actually lies in the connectivity, at least theoretically. The hybrid SIM slot allows the simultaneous use of two micro-SIM cards or one micro-SIM and one microSD card. This is perhaps one of the biggest points of criticism, digging out a micro-SIM card wasn’t that easy. But if you still have one of them or get one extra, you will have to fight further. The S10 Pro servo is only equipped with LTE band 1 and band 3. 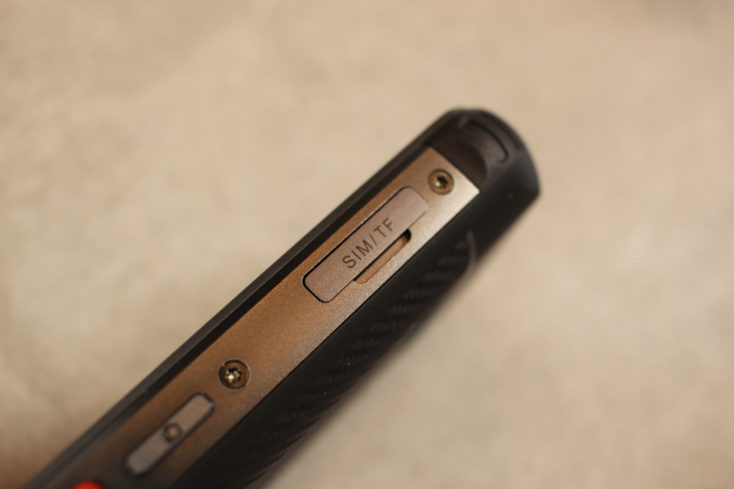 As we are still waiting for our micro-SIM, we cannot currently make any statement about the internet, as we have not yet been able to test it. We will gladly provide this later. But at least GPS, BDS, GLONASS and a PPT walkie talkie function is integrated. For local internet 802.11 b/g/n WiFi is available. 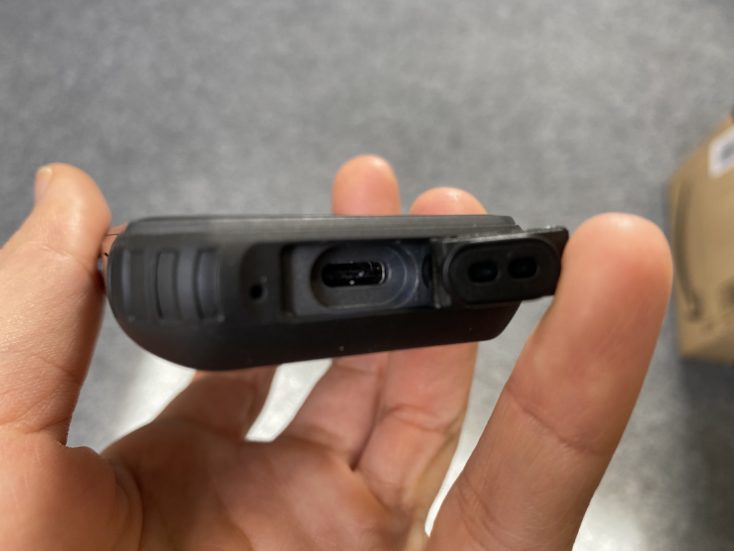 NFC is particularly special, which can also be used for mobile payment, Google Pay only requires the Android 5 operating system, and the S10 Pro even has Android 6 pre-installed. The cashier’s view wasn’t bad, she’s certainly never used such a small mobile phone for payment. 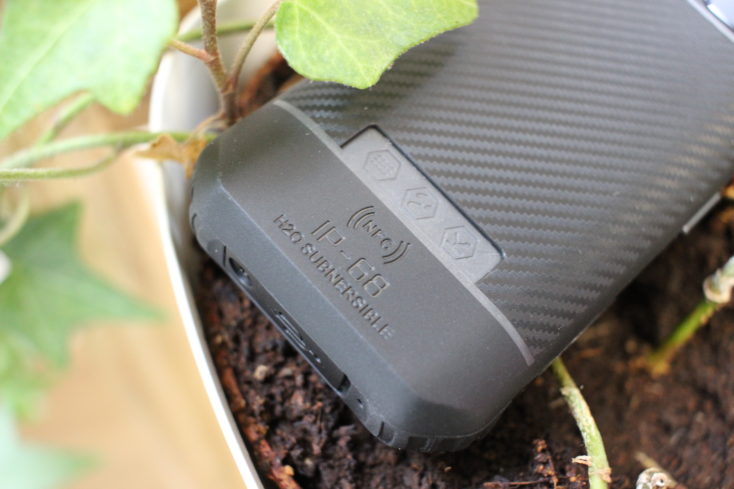 The Servo S10 Pro is not only something for enthusiasts of compact smartphones, but also something for nostalgics. After all, it runs on the Android 6 operating system, which we haven’t seen in this form for a long time. Not only the old look and the limited functions seem a bit strange, but also the fact that no widget or anything else is preinstalled is strange for the first time. But of course this can be fixed quickly and overall the operating system runs surprisingly smoothly. Servo has its own icon pack preinstalled, but not much else. The Android 6 OS is quite pure and only needs the most necessary – no bloatware and no other unwanted services. The Play Store is already preinstalled, but no Google services, which you can also quickly catch up on. However, the S10 Pro was already set up at delivery. If that should be the case with you, reset it and set it up again yourself. This is as easy as usual!

We find the S10 Pro servo really charming. Due to its relatively low power, it is probably only for the fewest an everyday device, but for festivals, holidays, hikes or as an emergency or second mobile phone certainly an idea. But it is incredibly fun, especially since you don’t have to treat it like a raw egg! It is really robust and super handy, maybe even a bit too small. I would like to see a 4 inch display, but it’s a good start and hopefully an inspiration for other manufacturers to consider a compact series again.

As a daily driver it is in my opinion a bit too weak, offers a bit too little battery life and is a bit disappointing in terms of operating system and camera, even if it is better than I first thought. Also, the fact that it is not really waterproof, although advertised, is a big minus point. For what it is, however, it is surprisingly well implemented and thus, as a second or replacement mobile phone, a small highlight in my eyes. But it is not enough for more.