0 Kommentare July 14, 2021by Thorben
Hey, guys! Just a heads up: The linked offer is already a bit older and the price of the gadget might have changed or it might not be available anymore.

Cappucino at the touch of a button is really only known from a fully automatic coffee machine. The SEVEN&ME coffee machine takes a slightly different approach and combines the espresso maker with a milk frother. It could hardly be more convenient, but it is cheaper. 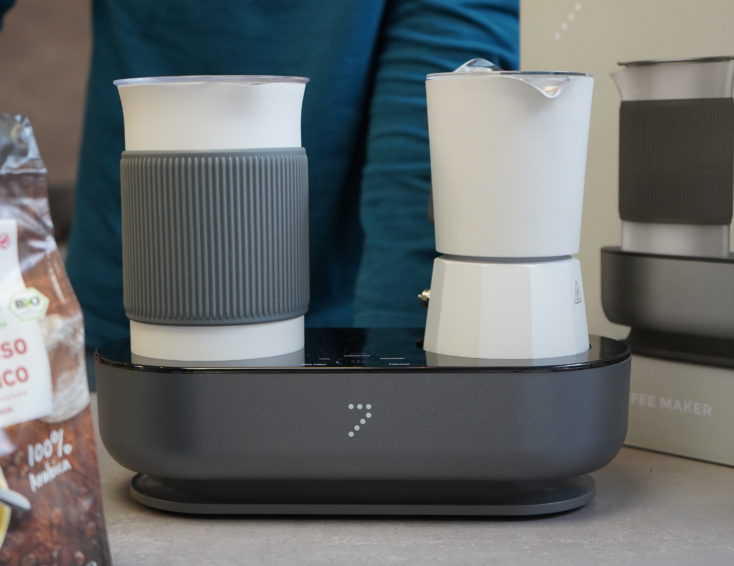 The idea behind the SEVEN&ME coffee maker is fairly obvious to coffee enthusiasts. Basically, this “all-in-one” device consists of three elements. An espresso maker is responsible for the coffee, which is also often referred to as a bialetti. Espresso makers from the house of Bialetti are the original, the “Moka Express” was invented back in 1933. Variations of it can now be found in abundance, whereby the original is not necessarily more expensive than the competition. In addition, there is a milk frother, which makes it possible to prepare coffee specialties such as a capuccino or latte macchiato. 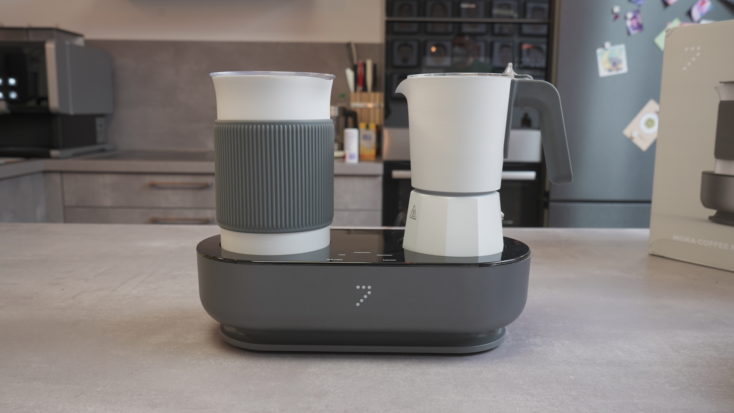 The real highlight of the device is the base station that connects the two elements. Equipped with two “hotplates” and the control element, the SEVEN&ME coffee maker ensures that the espresso maker and milk frother are ready at the same time. Thus, you also need only one power connection, the base heats coffee and milk simultaneously. 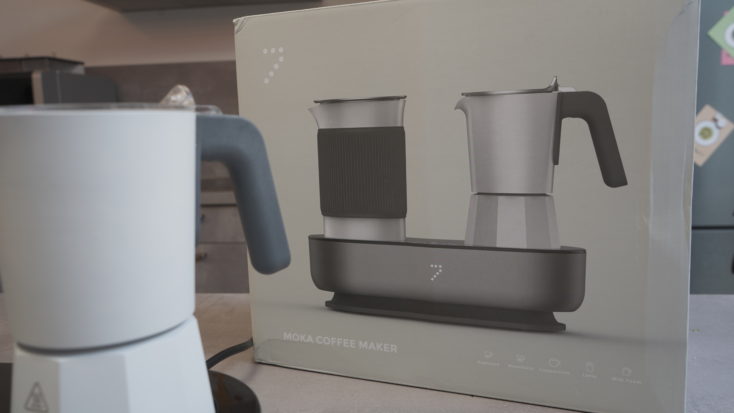 I was a bit surprised about the size of the espresso maker. While there are various stoves from a size of two cups up to six cups, the SEVEN&ME espresso maker is limited to a size of one to two cups. The SEVEN&ME is also dubbed as a 1-cup coffee maker.

According to the price, the box of the SEVEN&ME coffee maker already looks much higher quality than the standard China gadget. The light gray box shows the most important functions on the side and contains the three elements of the coffee maker safely packed. The base station, milk frother and espresso maker are individually packaged and positioned in a drop-resistant box.

Everything arrived safely to us. In addition, the manufacturer also puts an instruction manual in the box, which is, among other things, in German and very easy to understand. An EU plug and CE mark are present (German version).

You can tell the SEVEN&ME coffee maker that the manufacturer has put some thought into it. The design of the box is in line with the design language of the product. The milk frother and espresso maker are light gray, almost white, with a rough but classy surface. The functional parts, such as the handle of the espresso maker or the rubber cover of the milk frother, are dark gray. The base station contrasts with its black surface and dark gray belly. It looks modern and extremely stylish, everyone who saw the machine in the office kitchen could confirm that to me. 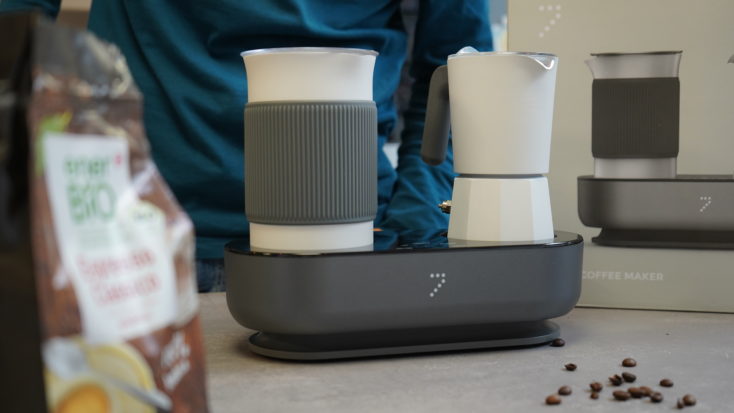 There is also nothing to criticize about the workmanship here. I have both espresso makers and milk frothers from other manufacturers separately at home, and both feel “cheaper” in terms of the material used and the moving parts. SEVEN&ME even includes a second stirrer (moving part) in the package. 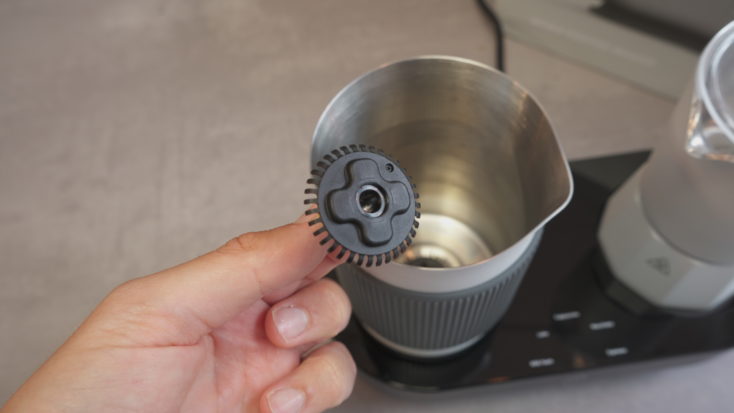 Operation of the SEVEN&ME coffee maker

The preparation of a coffee or espresso with the SEVEN&ME should be familiar to every Bialetti owner. After unpacking, it is recommended to first clean all components. Then you need to fill the lower part of the espresso maker with water up to the mark, pour espresso powder (best to grind it fresh yourself!) into the sieve, smooth it out and screw on the upper part of the maker. Then you need to put the stove on the designated hotplate (is marked accordingly). There is a contact installed there, which registers the stove or the milk frother when the weight is appropriate. 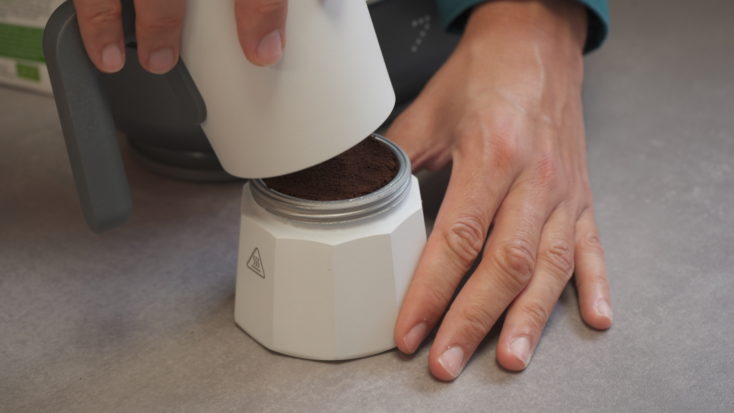 Depending on the coffee specialty, you then have to pour in the milk or milk alternative. In the frother there are corresponding markings for the different specialties, i.e. for macchiato (espresso with little frothed milk), cappucino or latte macchiato. For a cappucino, you fill the milk to the middle line. Then you turn on the machine on the power button, select a coffee and confirm the selection. Then the display changes and you get status LEDs to indicate progress. 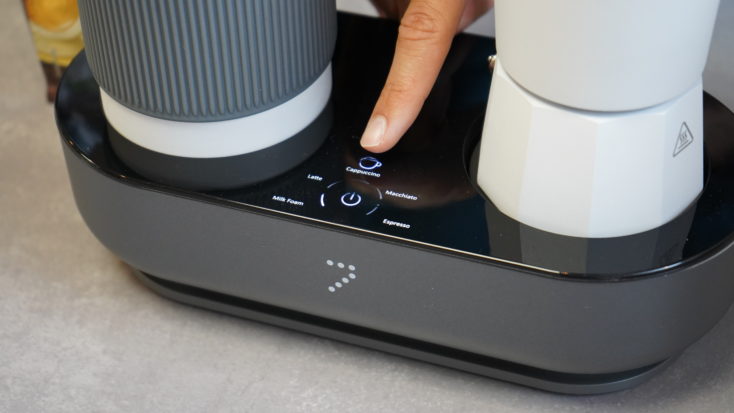 It takes a little over three minutes to prepare a cappuccino. The espresso only enters the stove at the last moment of preparation, so don’t be put off if it takes a while. The espresso maker is equipped with a pressure valve, so there is at least a hint of crema, I was a bit surprised by this. Still, this espresso preparation can’t compete with a portafilter, which produces a frothy crema. However, I am thrilled with the milk frother, which conjured up a fine-pored foam. 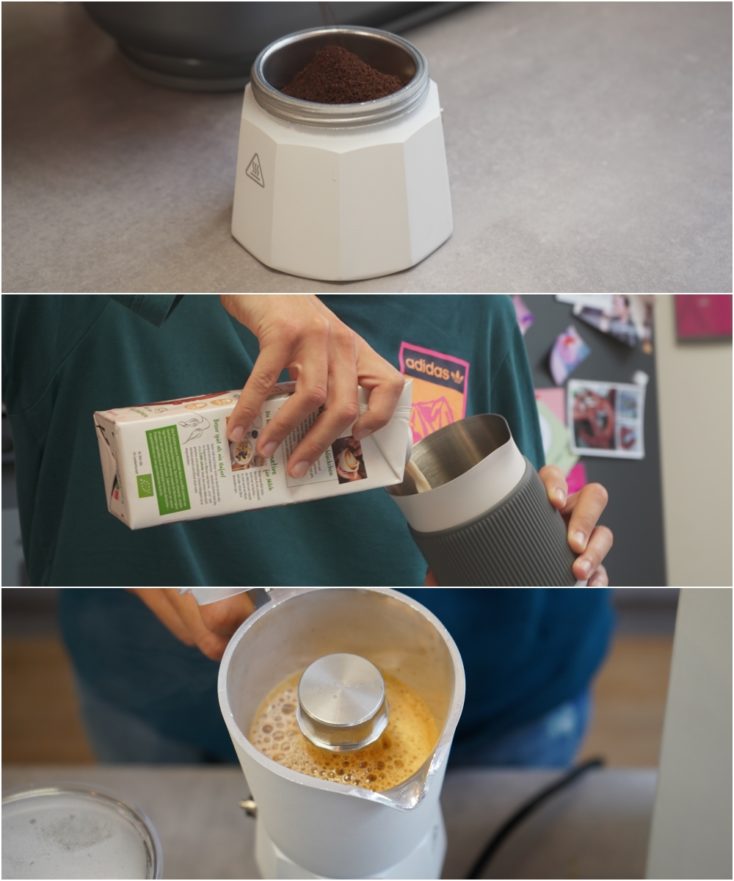 Of course, the taste depends on the bean used and the milk (or milk alternative), but even with minimal effort (drugstore coffee & milk) I am quite satisfied with the result. The cappucino tastes good, and better than some you get in the usual café.

Similar to the normal cooking, the washing up is what sometimes stops you from making it. Cleaning the espresso maker is a bit of a pain. First of all, you should rinse the bottom part of the espresso maker with cold water, otherwise you won’t be able to turn it on at all because of the pressure. Then you have to remove the coffee grounds, for which a spoon is recommended if you don’t want to get your hands dirty. The milk frother, on the other hand, can easily be rinsed with water, which should be done as soon as possible after preparation. Do not put the SEVEN&ME in the dishwasher!

If you only evaluate the product, the SEVEN&ME coffee maker, there is nothing but a positive overall impression after the first cappucinos. The design is chic & timeless, I have nothing to complain about the workmanship, the functionality is right and cleaning is relatively quick by hand. Also, I like the idea of connecting an espresso maker and a milk frother to this base station, and for some coffee lovers it certainly makes sense. 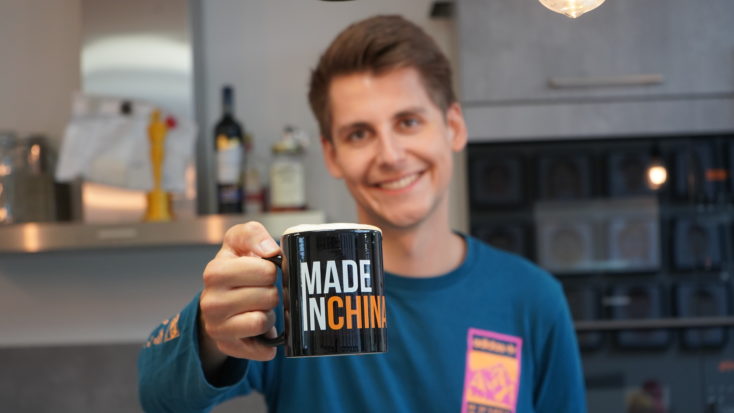 But I can’t find a good word to say about the price, unfortunately. You can get the original Bialetti Moka Express espresso maker for under $25 on Amazon and I also get a good milk frother for under $50. So in combination, I have to pay just under $75. Even if I have even more demands for brand or design, I end up at around $100. Then it must still be worth $129 to me that the two machines are ready at the same time and I only need one socket. Because that’s the big advantage of the SEVEN&ME coffee machine: both are ready at the same time at the touch of a button.

But even if I want to spend 200€/$230 on a coffee machine, which coffee enthusiasts are quite willing to do, I also get an entry-level Delonghi portafilter and an additional milk frother. That’s not ready together at the push of a button, but the coffee base, the espresso, is certainly better. Also, with the SEVEN&ME, you don’t have a volume or speed advantage like you do with a fully automatic machine.

Or what advantage do you see in the SEVEN&ME coffee machine?