3 Kommentare May 15, 2018by Thorben
Hey, guys! Just a heads up: The linked offer is already a bit older and the price of the gadget might have changed or it might not be available anymore.

Singing under running water is generally one of man’s favourite pastimes. With the BTS-06 there is the suitable upgrade for the shower. Thanks to the microphone and Bluetooth 4.0, you can even make calls in the shower – who doesn’t want to? We have taken a closer look at the shower bluetooth speaker BTS-06 for you. With a few buttons on the front of the speaker, some functions can be performed without using the smartphone in the shower. For example, you can change the song, change the volume or answer or make a phone call. The running time of the 8.1 x 8.1 x 5.5 cm gadget is stated as approximately 6 hours. Charging is also done via a USB port and the included cable. After opening the package, fortunately no biting rubber smell, as known from many a gadget from China, came to meet us. The BTS-06 is completely odourless. After loading the small Bluetooth Speaker you can start immediately. The speaker connects easily to smartphones, tablets, etc. that support Bluetooth 4.0. The sound of the speaker comes mainly from the back. There, directly behind the suction cup, are small holes through which the sound reaches the outside. As you can imagine, the speaker is not a high-end speaker for the price but at least it is loud enough to drown out the rippling water of the shower. 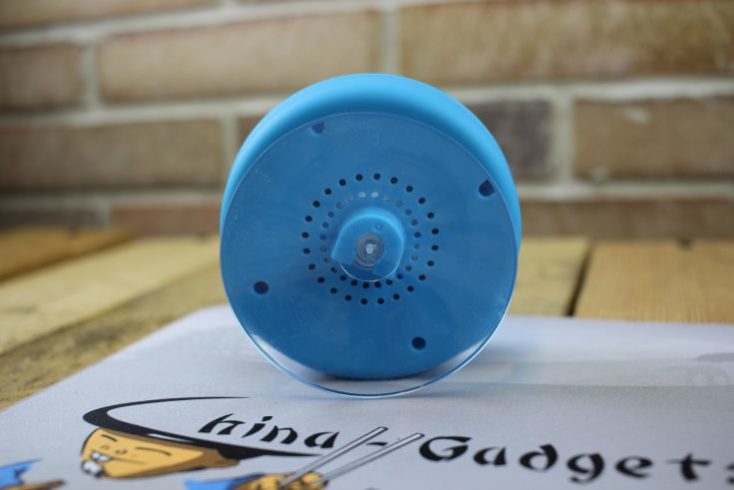 Fortunately, the sound doesn’t “scratch” in the test, even if you turn the speaker up fully. If you asked me for my opinion, I would say: The sound of the speaker is midrange-heavy. Bass is not really produced in the small cabinet and the high tones are also not particularly clear. That’s my personal opinion – when it comes to sound, opinions can vary greatly. But as I said, we’re talking about a cheap gadget for the shower and it’s good for that! It definitely has a louder, better sound than any smartphone ?

Especially when you have slept poorly and your motivation is not at its peak, music when brushing your teeth works wonders, at least for me!