0 Kommentare April 1, 2018 by Maike
Hey, guys! Just a heads up: The linked offer is already a bit older and the price of the gadget might have changed or it might not be available anymore.

The camera manufacturer SJCAM has been a familiar name to us for several years, and from time to time models of the brand appear as GoPro or YI competitors. Apparently they are also concerned about our safety: With the SJCAM A10 Bodycam there is now a camera on the market that we only know from police officers or others. 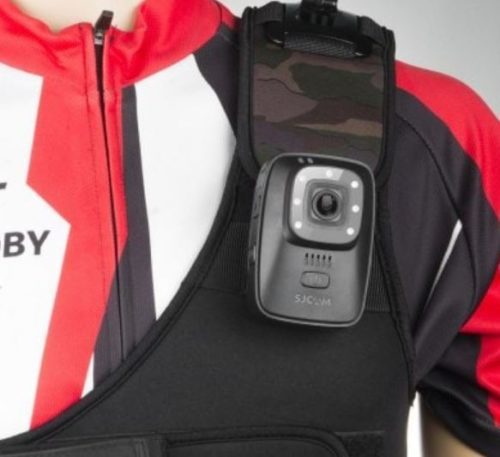 Like when testing the 70 Minutes Dashcam you always ask yourself about the meaning of such gadgets, because camera gadgets are somewhat questionable from the point of view of data protection or privacy. In this context, a responsible handling of the user is required. Let’s take a closer look at the body cam.

The 8.3 x 5.8 x 4.0 cm small body cam weighs 13.4 g and comes with two different clips for attaching the camera. With the Xiaomi Dashcam we were lacking the display, with the SJCAM we have a 2.0 inch touch screen, which can be used to adjust the usual picture settings and more, just like with actioncams. The camera is charged via USB-C, after a charging time of 3 hours the camera is ready for a working time of 2 hours.

The camera records Mp4 files in 1920 x 1080 p resolution. There is no internal memory for storing the recordings, but the memory can be increased to 64 GB via a micro SD card. Thanks to internal WiFi, the A10 can be connected to the associated app (Android, iOS), making it easier to set up the image or change settings. The WiFi distance is 10 meters. This allows the camera to be started or turned off from the smartphone at this distance.

The body cam shoots at a maximum angle of 140°. The built-in chipset is the Novatek 96658, which is often used in action cams and is dustproof and protected against water jets from any angle with IP protection class 65. It should also be possible to control the camera with a remote control, but this is not included in the scope of delivery.

Surely the sense behind using a body cam is questionable. For this reason, SJCAM may have considered further applications for the small camera. Just as one or another actioncam can also be used as a dashcam, the SJCAM A10 can be used as such. The built-in modes “Car” and “Night” speak for the use as a dashcam. There is also motion detection, which can also be used well in the car (parking sensors, etc.).

The IP protection class, the supposedly good recording quality of the camera (if the camera has not been tampered with here) and the clips included in the scope of delivery with which the camera can be attached speak in favour of its use as an actioncam. Another interesting feature is the noise reduction of the SJCAM A10, which should ensure good sound recordings.

What do you think? Are body cams useful for more security or an impairment of privacy?