1 Kommentare October 3, 2021by Henning
Hey, guys! Just a heads up: The linked offer is already a bit older and the price of the gadget might have changed or it might not be available anymore.

The Smartmi air heater is only available within the EU.

The name already suggests it: Smartmi is one of many companies from the ecosystem of the tech giant Xiaomi. So far, we have gotten to know the Standing Fan 3 with integrated air purifier from Smartmi, which we liked a lot. Is the smart air heater more than just a fancy version of a heater? 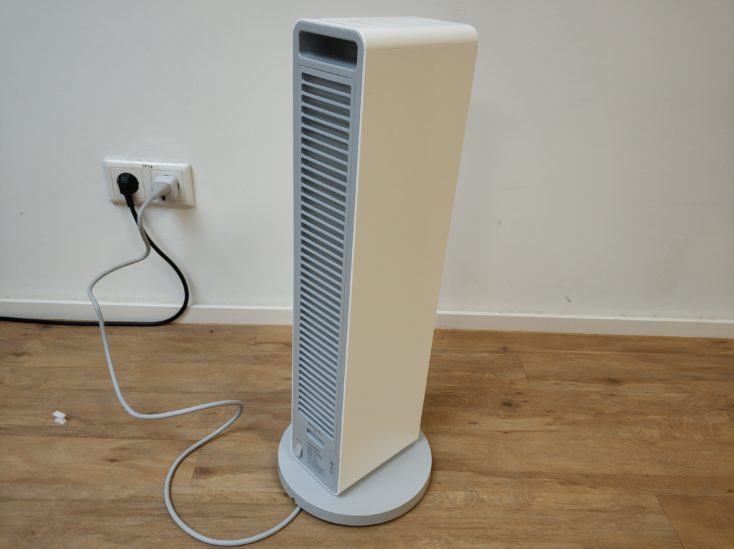 There is not much in the rather large package. Even though the included EU adapter does what it is supposed to, I am not a huge fan of this construct. I therefore recommend this version for a few Euros, which I use for every Chinese device.

Visually, the 61.0 x 16.0 x 10.5 cm (incl. base) tall heater looks very similar to the Xiaomi tower fan. Regardless of whether it is a subsidiary or however partnered ecosystem company – the Xiaomi white prevails here as well and makes the heater look thoroughly modern and chic. Along with that, the material quality is also high and everything is cleanly manufactured.

However, one thing is perhaps not so sexy after all: The affixed CE mark does not necessarily create a particularly credible impression.

The Smartmi heater in use

Plug the charging cable with EU adapter into the socket and switch on the air heater on the back, and you’re ready to cozy up in the cold season. At least that’s the theory. The heater turns on with a loud beep. Generally, the high-built device comments on any change. Fortunately, it doesn’t once you’ve set a heating mode (but setting it is still beeped).

In return, the heater is at least quiet otherwise: With an operating volume of 35 dB, the Smartmi heater is hardly louder than conventional, wide-open heaters (average 30 dB according to search engine queries). With 2000W of power, the environment is then heated. This is supported by the 90° rotatability of the device. This can be inserted via the button with the arrows (see picture here below).

The electric air heater can also be controlled via voice control and app. However, the former is only possible with Xiaomi’s in-house AI Speaker. No Alexa, no Google. Another indication that the heater was primarily and possibly only designed for the Chinese market. Theoretically, the heater can also be controlled via app, but that is currently not possible, as we learned. Just in case you’re wondering what the Wi-Fi icon on the top is all about.

There is still the remote control:

We do not want to talk about a “conclusion” here, because we are not experts in heating. However, in terms of heat, we can say that the room must already be relatively small (less than 20 m²), or the air heater must be very close to the owner, so that he will notice something from the heat. The Smartmi device is at least not comparable to a “real” heater, rather a nice gadget for frostbite in the office (Alex grabbed it right away) or in the home office.

What do you think of the long-lasting heater?