Soldering station with six arms for $17.52

0 Kommentare August 10, 2019 by Maike
Hey, guys! Just a heads up: The linked offer is already a bit older and the price of the gadget might have changed or it might not be available anymore.

If you like to do a lot of handicrafts or enjoy small electric DIYs, the soldering station with six arms can be used as a relief for various tasks. Even without soldering, this gadget offers a stable holder for your projects. 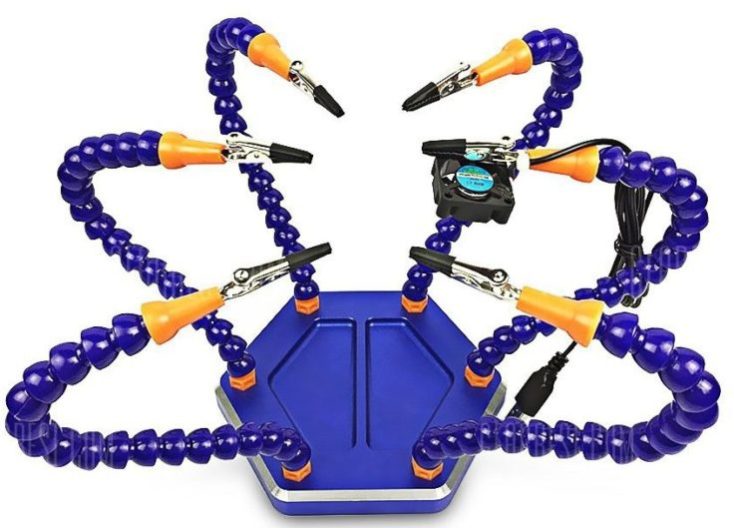 Included in delivery are the aluminium base and six flexible holders with crocodile clips. There are a few versions with a small fan with USB connection is attached to one of the brackets. If you have attached the project of your choice with the help of the clamp, you can use the fan to suck out the smoke that arises during soldering. The clamps can be rotated 360°. The tentacles are almost 30cm long and consist of individual joints.

The aluminium base weighs approx. 500g and is equipped with small rubber studs for a secure stand. Since the holder is designed for smaller projects, 500g counterweight should be sufficient, but if necessary, the base can of course be easily weighted. The whole soldering station weighs about 560g and measures 13 x 30 cm.

At Gearbest you get the six-armed tentacle soldering station in blue or white, at Amazon and at the other suppliers you still have the choice between blue, purple, red and black. The soldering station is probably very well suited for processing the DIYs already introduced on ChinaGadgets, such as the LED clock and the LED christmas tree. But I think the station is also suitable for more complex projects, like the LED Cube, which has to be assembled from really many smaller parts. Thanks to the six arms you can hold a lot in position. Who often works on such DIY gadgets will know if and for what he uses this tool best. So, what is your next project? ?