0 Kommentare October 10, 2021 by Maike
Hey, guys! Just a heads up: The linked offer is already a bit older and the price of the gadget might have changed or it might not be available anymore.

We have all noticed that the temperatures are falling and it is also getting a little chilly at work. Especially in winter it often happens that the fingers get cold. The heated SOTHING mouse pad can help. We ordered it and tested it out. 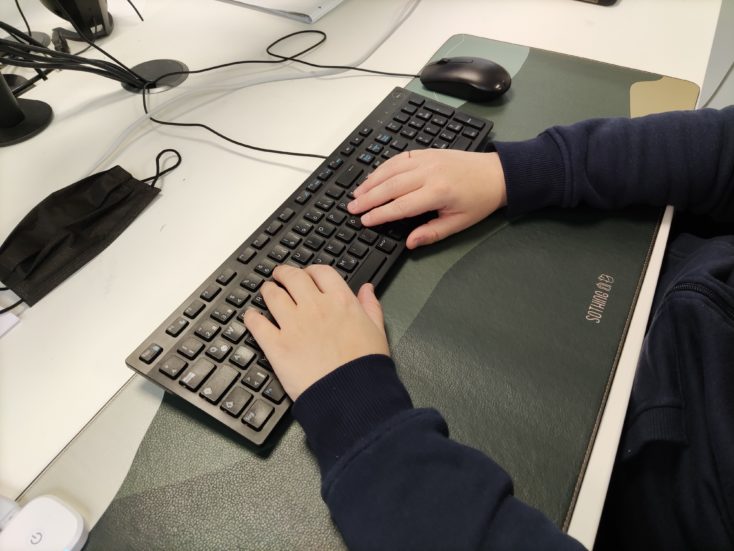 The SOTHING mouse pad is supplied by Banggood with a China plug. Fortunately, you can easily replace the cable and replace it with a C7 power cable with US plug

Finally no more cold hands – if the size fits

We’ve already introduced you to one or two other gadgets against cold fingers while working, including a much smaller and fun-designed heated mouse pad or the classic heated USB gloves. But the downside to these is that it either looks pretty silly (depending on your work environment and your own preference) and you’re pretty much tied to a fairly small warm place. With the heated SOTHING mouse pad, there is a 33 x 80 cm area and in two colors (green/pink). In real life, however, the size of the mouse pad did surprise us slightly; most of us would have estimated it to be larger. 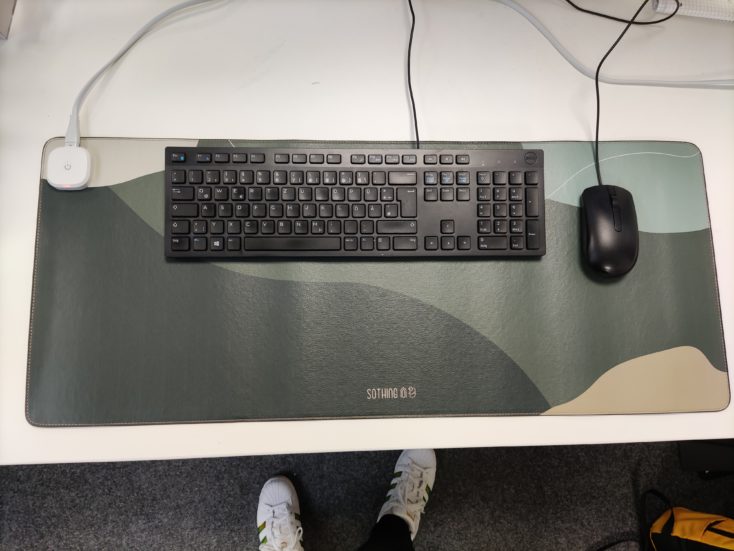 This is not a problem in itself, but if you are used to a larger mouse pad, you will have to get used to it. Especially people with low mouse sensitivity and a larger range of motion could quickly reach the mat’s limits. Especially if you want to place your hands or arms in front of the keyboard and mouse, so that you also get some of the heat. A little more depth would have been an advantage. On the other hand, you could also put your keyboard or laptop behind the mat so that they don’t heat up and still benefit from the warmth of the mouse pad, probably just personal preference.

How warm does the mouse pad really get?

Inside is a Carbon Crystal heating film that covers 96% of the total surface area. One of three temperature levels is supposed to be reached within 15 seconds. 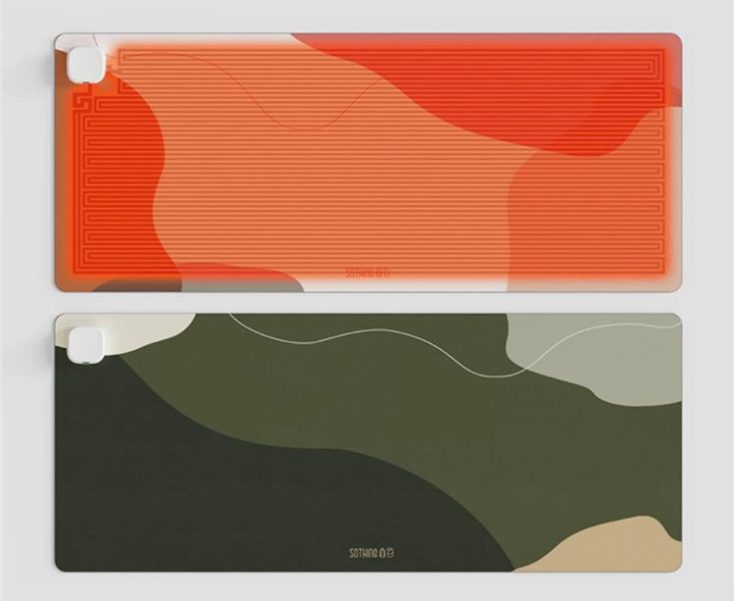 This can be recognized by the built-in light in the mouse pad’s control element. Blue is the lowest level, green medium and red the highest.

This is selected via a small switch in the upper left corner. Temperatures that can be reached are 38, 42 or 48°C. In the details of the store page, it once says that it only takes 15 seconds to heat up the mat, but at the same time that it would take 1 minute to reach 45°C. In fact, it takes up to two minutes at the beginning until the mouse pad has really reached its full temperature. However, that is not a disadvantage in my eyes either.

But then you actually notice that very clearly. In the test, it was most pleasant for me to set the lowest temperature (blue). On the highest setting, it was clearly too hot for me and especially for the keyboard and mouse. Especially since the temperature under the keyboard also accumulates (see upper picture). The FLIR camera of the Ulefone Armor 11T 5G measured temperatures of up to 55°C. Thus, you shouldn’t place your laptop or similar on the mouse pad when it’s working at maximum speed. However, this is also the reason for the pad’s relative slenderness, because you can place it in front of the laptop. 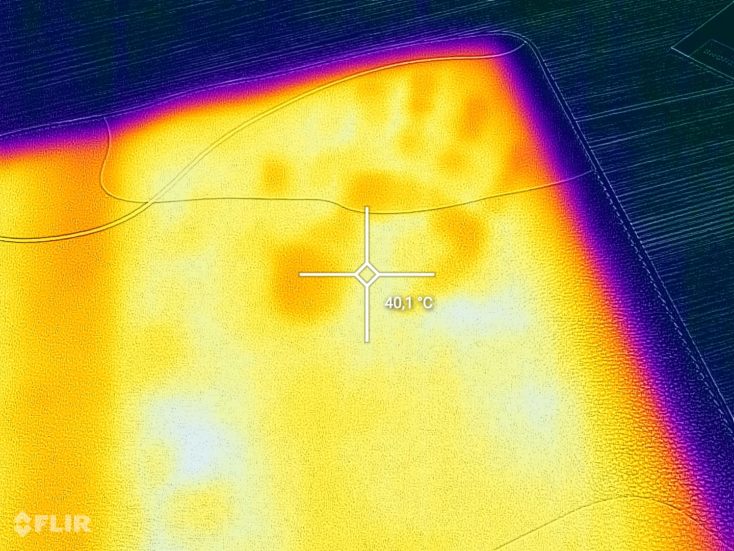 The overall temperature is also very evenly distributed over the entire mat, even with the FLIR camera you can see at most the packaging creases, but the heat distributes neatly to the edge of the mat, leaving some space around the control element.

The switch also has integrated overheating protection and automatic shutdown mode. With this, the mat automatically turns off after 4 hours at the latest.

So that you don’t just fall asleep right away in the comfortably warm environment, the SOTHING mouse pad also has a get-up reminder in its functional scope. This reminds you to get up and move every hour. These features are also available on many smartwatches and fitness trackers, even on the Mi Band 6.

Fortunately, there is no extremely annoying sound, but should you close your eyes for a moment, the blinking red light from the switch in the corner doesn’t really help. But it’s not necessarily bad as a gentle reminder during work. In fact, I hardly noticed it, if I hadn’t looked in the direction of the switch anyway, I would never have noticed the gentle blinking. But I don’t find the feature bad now either.

A mouse pad that is not suitable for mice

The SOTHING mouse pad consists of different layers. However, the top layer is particularly interesting. This is made of PU plastic and is water-repellent. This makes sense in any case, because you often have a coffee or something similar on the surface and accidents can happen. But then you can wipe the mouse pad very easily. 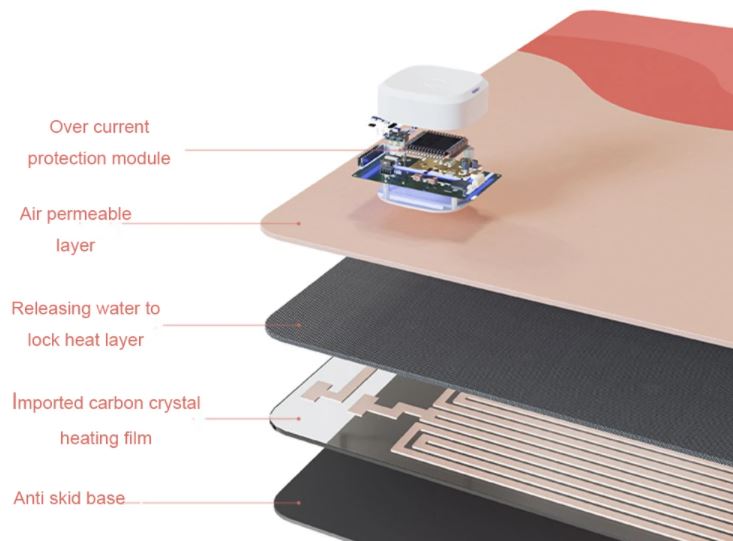 In reality, I don’t find the top layer of the mouse pad to be ideal for use as a mouse pad. The mouse simply sticks too much on the PU plastic. For normal office work, it’s still okay, but it’s definitely not suitable for gaming or for people who have a larger range of motion with the mouse. For me, it’s still enough, since I hardly move my mouse and have the sensitivity set high enough, but it’s still unnecessarily tiring to move the mouse sometimes. However, it doesn’t stop you from using a small extra mouse pad in case of emergency and still benefiting from the warmth of the SOTHING mouse pad.

I have already been able to test a small fan from SOTHING in the past and was very satisfied with the quality of the product then. The same applies to the SOTHING mouse pad. The workmanship is 1A, everything feels very high-quality, the edges of the mouse pad are neatly and chicly sewn, the back of the pad has a good anti-slip surface and the integrated switch also sits neatly in the mat. 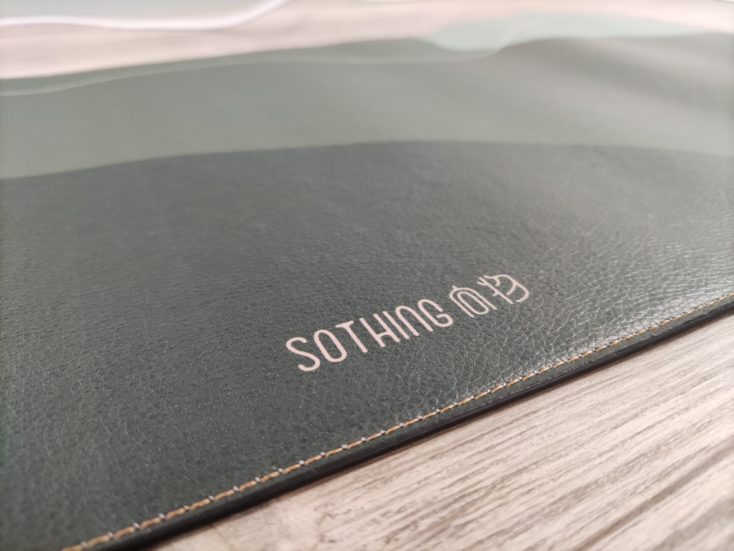 Overall, I’m a big fan of the heated mouse pad because I’m extremely annoyed with cold fingers at work. Now I am so comfortably warm at work that I rather have to stop myself from putting my head on the table and just fall asleep. From me there’s a 👍, especially for the offer price. Nevertheless, it annoys me a bit that the surface is so faltering for the mouse, that simply contradicts the use as a mouse pad. But at least you no longer need a cup warmer. :p