1 Kommentare June 16, 2018by Thorben
Hey, guys! Just a heads up: The linked offer is already a bit older and the price of the gadget might have changed or it might not be available anymore.

Syma was one of those names a few years ago that always came up when it came to inexpensive drones that were also suitable for beginners. Especially the Syma X5 found many fans and above all many imitators. Now we have the Syma X8 Pro and take a look at the latest version of the X8 series. 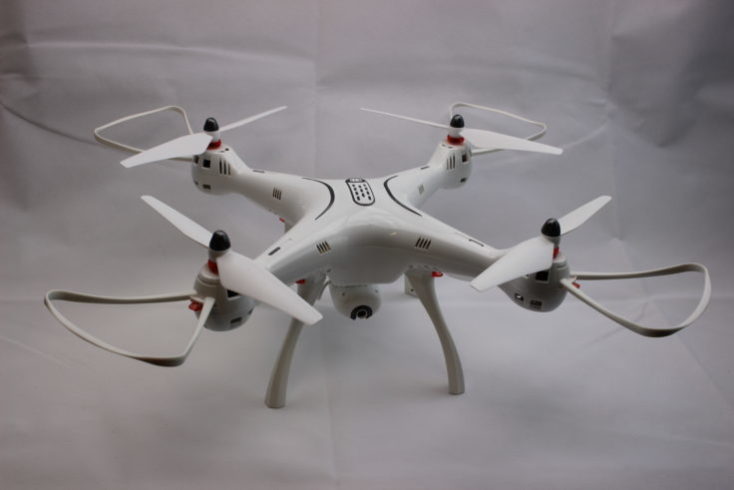 Design, workmanship and scope of delivery

As usual with drones of this size, the Syma X8 Pro does not come assembled to you. Instead, there are several individual parts in the box that first have to be mounted, namely feet, rotors, protectors and the camera. With other models it is often necessary to use a screwdriver, but here every single part has to be fixed by click or snap mechanisms. This holds just as well, but is above all very easy to handle. You can use the instructions, but you definitely don’t need them.

In addition, there are other parts in the packaging, all of which are beautifully sorted and can easily be stored again. The only exception is the charging cable, which sometimes has to be “squeezed” a little into the appropriate shape. There are four spare rotors (that’s how it has to be), and there is also a smartphone holder for remote control in the box. The small, dark parts in the bag between the protectors are covers that are placed on the rotors, as you can see in the finished pictures. 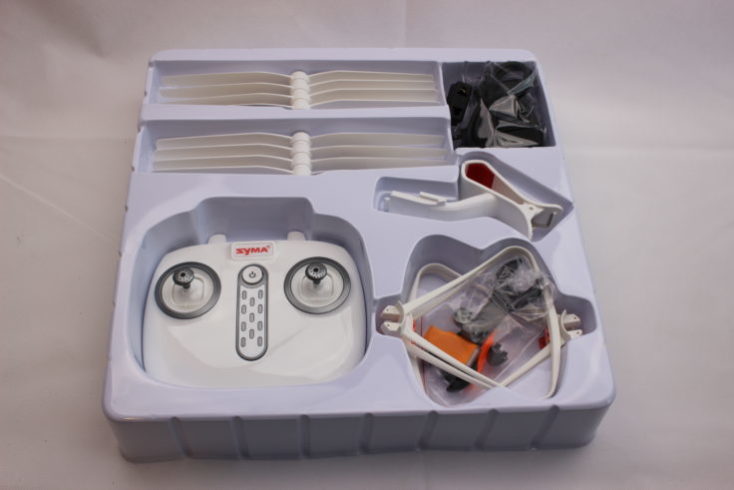 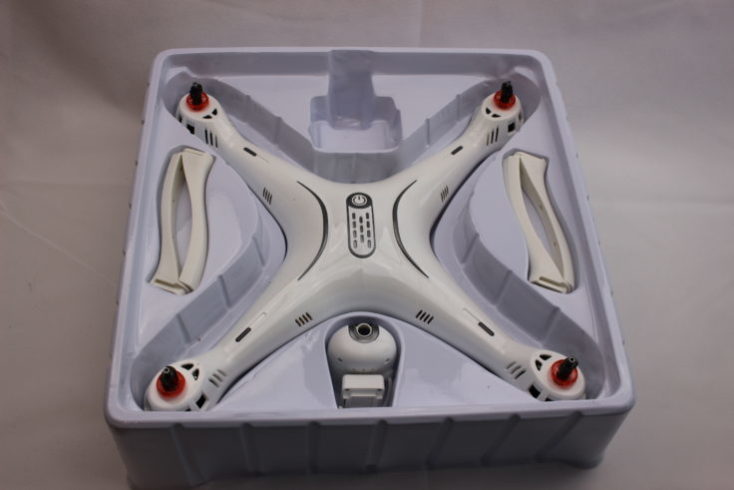 The packaging itself is fine. Foam would have been nicer than thin plastic, but it does the job. There is a transparent plastic cover for both boxes, which are stored in a cardboard box.

You might think you can’t do much different or new with quadrocopter controls. Nevertheless, many remote controls differ not insignificantly from each other, and Syma also pushes some buttons back and forth here. Of course, the sticks are in their usual place, but apart from the power button you won’t find any other controls on the front. Instead, there are a total of six shoulder buttons. 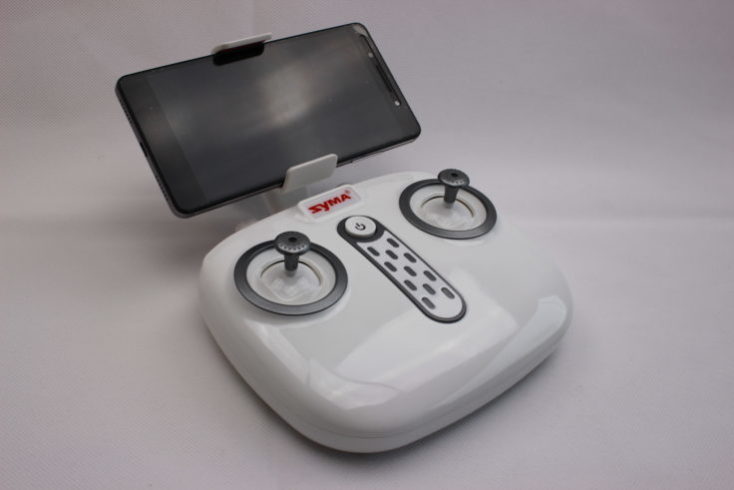 On the upper left there are four buttons for operating the camera, which are arranged cross-shaped. The right and left buttons are the respective triggers for video and photo shots, with the upper and lower buttons the camera can be tilted. Folding the buttons all together may still make sense somewhere, but the inclination of the camera via two different buttons instead of a small wheel (e.g. the DJI Spark or the UpAir One) is less comfortable. 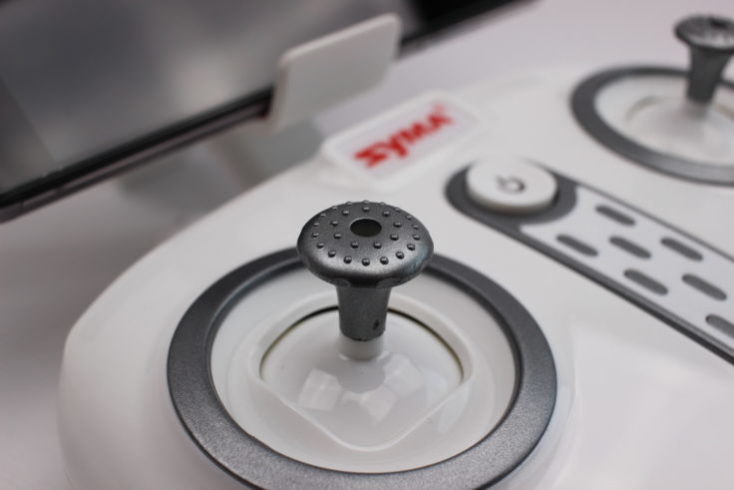 On the top right there are two shoulder buttons arranged one behind the other for automatic take-off or landing and the RTH (Return to home) function. On the back is a removable cover under which the connector for the included smartphone holder is located. This is just as easily mounted as the rest of the drone.

All in all, the remote control and the buttons feel a bit like cheap plastic and not really high-quality. The sticks also wobble slightly when not in use, but otherwise offer a pleasant resistance.

With or without a smartphone? The app for the drone

The Syma app is rather simple, unlike other drone apps you may know. You can find them either by scanning the QR code in the manual, or by searching the app “Syma FPV” in Playstore or iTunes. Unlike most smartphone apps, it is not used to control the drone, but only to display the camera’s video transmission. 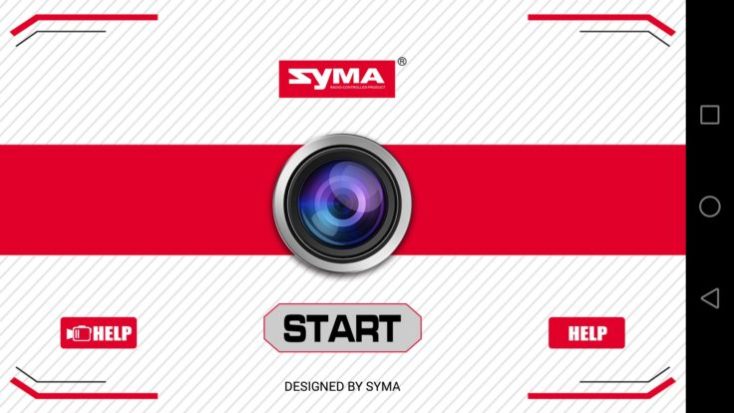 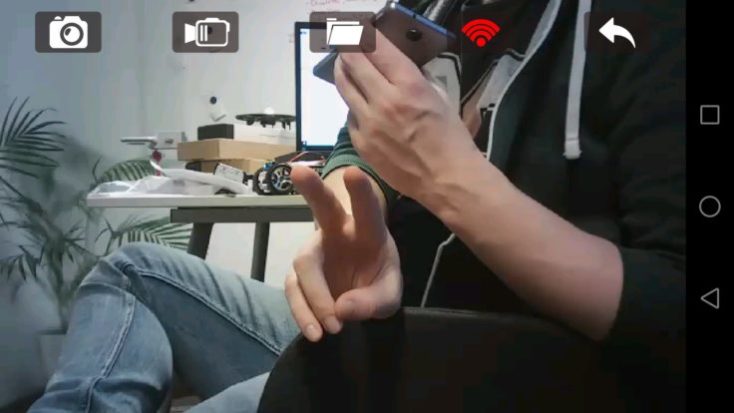 There is nothing more to see in the app than on the two screenshots. In the “Main Menu” there is a short video explaining how to connect the drone to the app (launch the drone – connect the smartphone to the drone’s WiFi – launch the app), and a short written explanation (both in English), but that was it. The only functions in the app itself are taking photos and videos.

The camera has a maximum resolution of 720p, images are stored on an SD card. Which is plugged into a slot on the back of the camera. Unfortunately, the quality is not very convincing. The weather during the test flight was windy and even a little rainy, but that does not explain the muddy shots that came out of the camera. The pictures don’t even look good on the small smartphone display – at most when you are five meters away from your mobile phone. 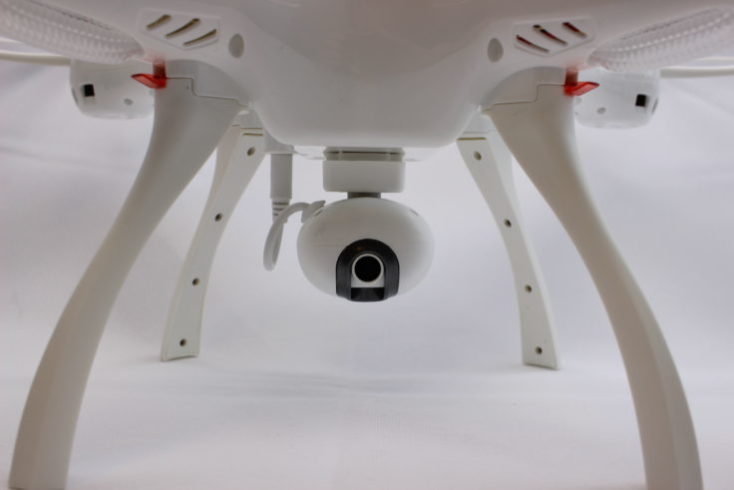 Since the connection of the drone to the smartphone display only works via WLAN, the range of transmission is limited accordingly. Up to 50 meters I had hardly any problems, but then it becomes signal weaker. On the next flight in better weather I will check the range again carefully.

A disadvantage are certainly the brushed motors (brush motors), which do not necessarily mean limitations in functionality, but are more susceptible than brushless motors and have a shorter service life.

Up to here I actually liked everything quite well, nevertheless the practical test was still missing. How long does the battery last, how well does the drone fly and how reliable does the RTH function work? I have flown in good weather (calm) as well as in really bad conditions (very strong wind and drizzle) and I am now very confident with my assessment.

The battery life I can correct minimally upward, even with strong wind I could fly and film 10 minutes continuously. 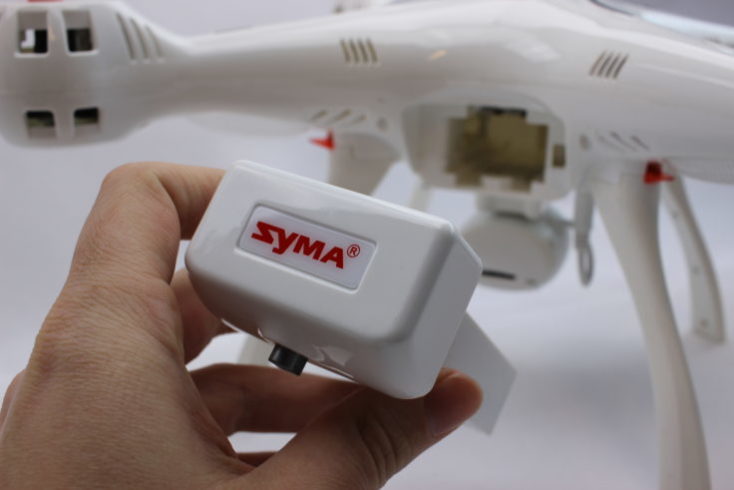 The drone has altitude hold and GPS positioning. Both functions work well, but, as expected, are highly stressed in strong winds, and the position does not always hold the drone to the metre. Balancing movements often appear jerky, and in the wind the drone visibly braces itself against them. But the height is quite accurate, and when there is no wind it stands in the air like a one.

There is also a failsafe function that allows the drone to automatically return to the launch position if the battery is low or the remote control is disconnected. To the meter exactly this does not work, and unfortunately also not always reliably. When the battery was exhausted during the first flight, she went to the ground about ten meters away (and somersaulted through the wind and landed on her head). 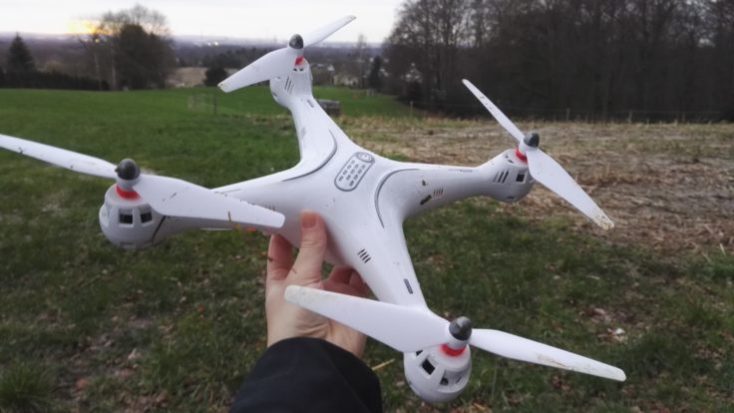 The first impression was definitely positive, because after unpacking I wasn’t expecting a high-quality, but properly processed drone. Thanks to the simple plug-in mechanism, assembling and dismantling is quick and easy, so you can fly off in no time at all. When there is no wind, the quadrocopter flies “sufficiently” well, that is, it can be precisely steered and, thanks to the built-in features, holds its position reliably.

But with the wind coming up, the flight is hardly fun anymore. It’s not even the camera that can’t take unshakeable shots because of the lack of gimbal. Despite the promised HD resolution, the images are muddy anyway, and details are no longer recognizable at a certain point. Maybe I’m spoiled by my Spark’s Full HD videos, but this is the best way to impress someone who’s never seen drone footage before. And then only briefly.

But I don’t want to write off the Syma X8 Pro completely here. After all, the drone doesn’t fly badly, for just over $100 you can at least practice controlling and flying by FPV on the display here. But if you want a full-fledged video drone and are willing to spend more, you’d be better off with the UpAir One Plus or the Xiaomi Mi Drone.