2 Kommentare August 10, 2019by Tim
Hey, guys! Just a heads up: The linked offer is already a bit older and the price of the gadget might have changed or it might not be available anymore.

With the TaoTronics Soundliberty 53 or TT-BH053, the Chinese manufacturer is launching its second Bluetooth In-Ear on the market. This time not in the “Bud-Design”, like the TT-BH052, but rather based on the Apple AirPod style and thus also as a counterpart to the Anker Soundcore Liberty Air. How does the cheaper Soundliberty 53 compare? 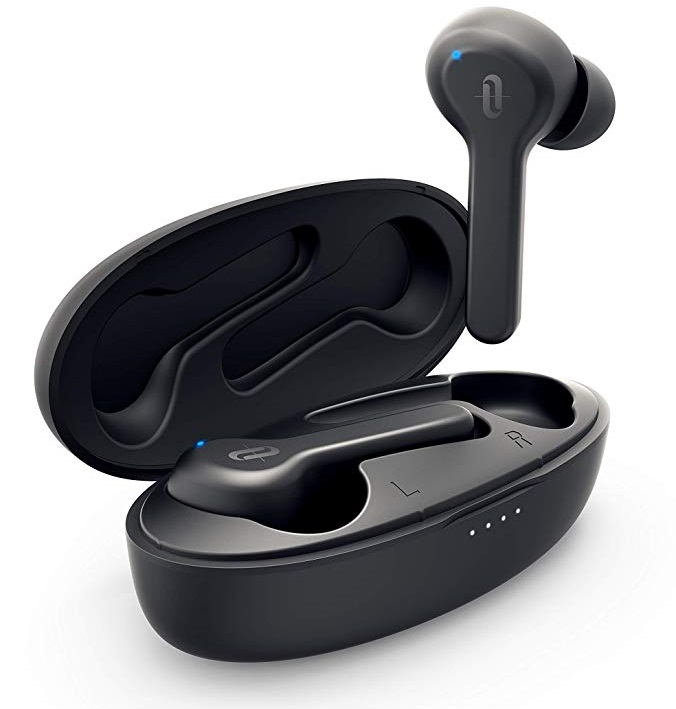 We received the TaoTronics Soundliberty 53 in a packaging that was unusual for the manufacturer. The TT-BH053 is our first test product with a new logo, new design and new colour. The original grey packaging became white, paired with a bright orange. Also the “TT-Logo” had to give way and is paired by a more abstract symbol with new font. 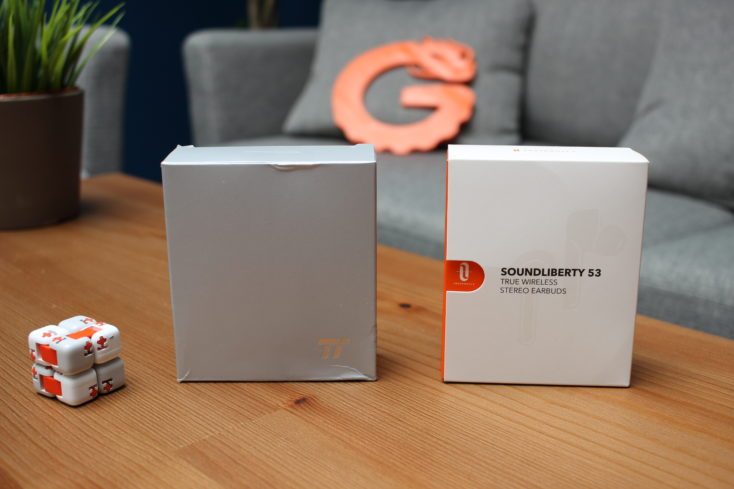 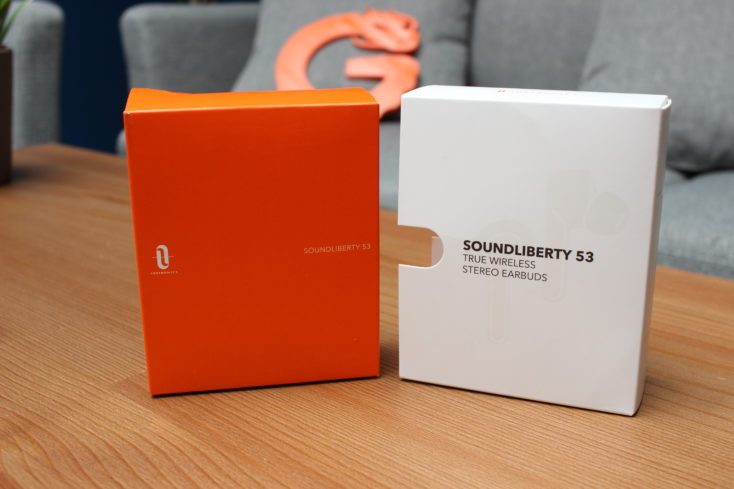 Personally, I like the new look, and TaoTronics products are definitely more eye-catching. Even if the orange reminds me of JBL and Tribit in the audio sector. Inside the package you will find the headphones with charging case, a user manual, four pairs of ear pads and a short Micro-USB charging cable. 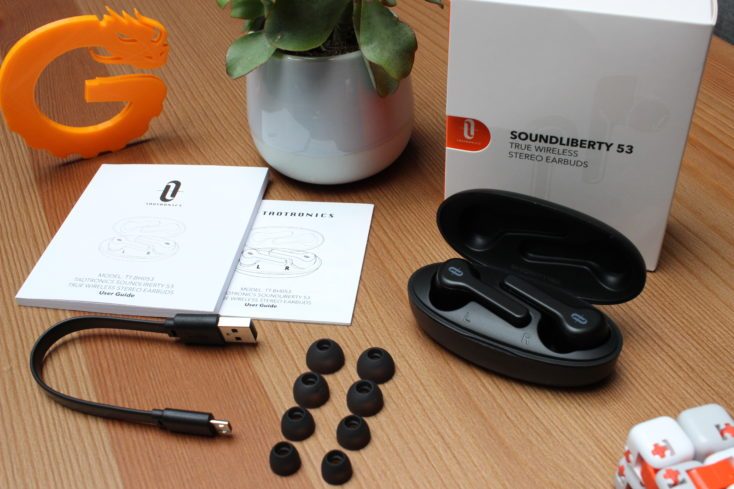 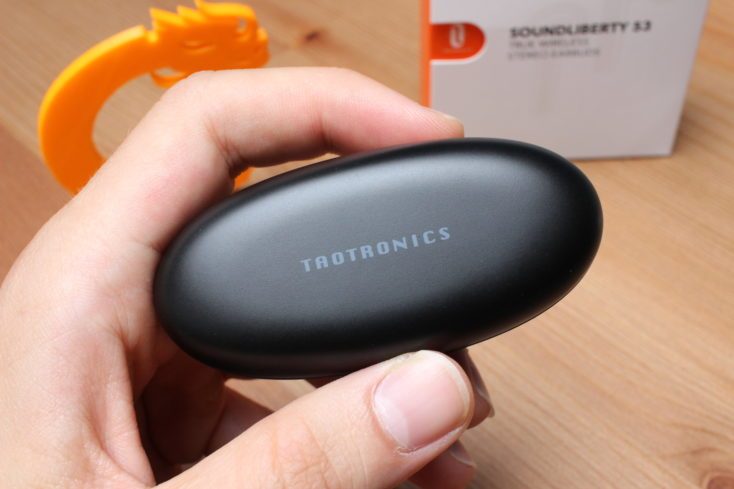 While the Liberty Air works according to the Apple AirPod principle, the TaoTronics TT-BH053 handsets are placed horizontally in the charging cradle and not vertically. Measuring 1.9 x 1.4 x 0.7 cm, the handsets are slightly larger than those of the Soundcore Liberty Air. I would call the weight of about 5 g per listener average.

I like the simple design in itself very much and it is not based on a headphone of a strong brand. Only the small TaoTronics logo on the back of the headphones creates a “colourful” accent.

The quality of the workmanship and materials is fine for me, but it could be of a higher quality. If you open the charging cradle, the hinge is a bit wobbly and the flap looks a bit too thin. Even the matt black plastic doesn’t leave the best impression, but it does serve its purpose.

But in relation to the price-performance ratio, you shouldn’t really complain here. After all, the TaoTronics TT-BH053 costs less than half the price of the TicPods Free or Soundcore Liberty Air.

The TaoTronics TT-BH053 receivers are equipped with a 6 mm dynamic driver. During the test phase I liked the sound of the TaoTronics Soundliberty 53.

The wireless in-ear convinces in the test with a beautiful overall sound, which suits my personal taste. The dynamic drivers deliver a high-resolution tweeter for this type of speaker, which is not scratched or falsified. Compared to the TT-BH042 there is hardly any audible difference in this frequency range, but I like the high frequency of the Anker Soundcore Liberty Air a bit better.

Compared to the Anker Soundcore Liberty Air, the midrange is a bit less emphasized, which is very much in line with my personal taste. It fits well between high and low frequencies, voices sound present, but not too powerful – very good! Here, too, the TaoTronics Soundliberty 53 sounds very similar to its “Earbud” version, the TT-BH052.

Last but not least, the TaoTronics TT-BH053 offers a solid bass. Compared to the TT-BH052 wireless Earbuds, it is marginally stronger and achieves somewhat lower frequencies in the sub-bass range, which makes the bass sound fuller. However, the Anker Soundcore Liberty Air, which “pushes” a little more in the ear, come even lower.

The TaoTronics TT-BH053 headset works surprisingly well in practice. Although my conversation partners said that my voice sometimes sounds a bit tinny, this does not affect the comprehensibility. In addition, the built-in microphones reliably filter background noise, and in the test there were hardly any interfering noises that have a negative effect on telephone conversations.

Although the TaoTronics Soundliberty 53 are not equipped with earhooks, they offer a pleasant hold in the ear in the test. Similar to the Anker Soundcore Liberty Air, this wireless in-ear is also ergonomically designed, so that the listeners can virtually hook into the ear canal. 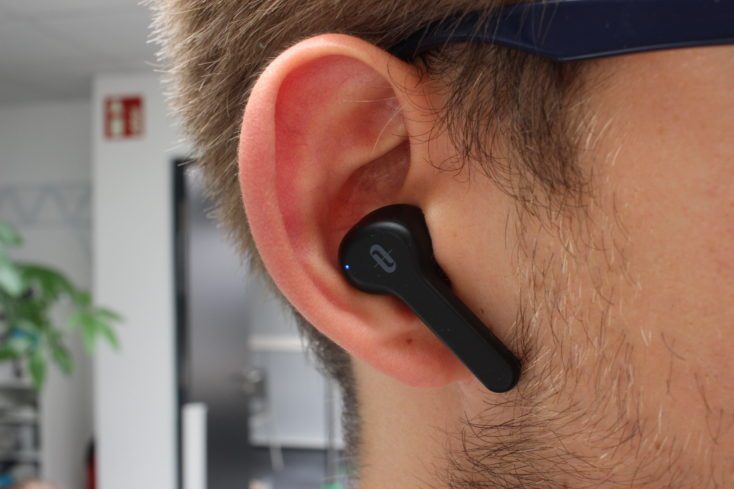 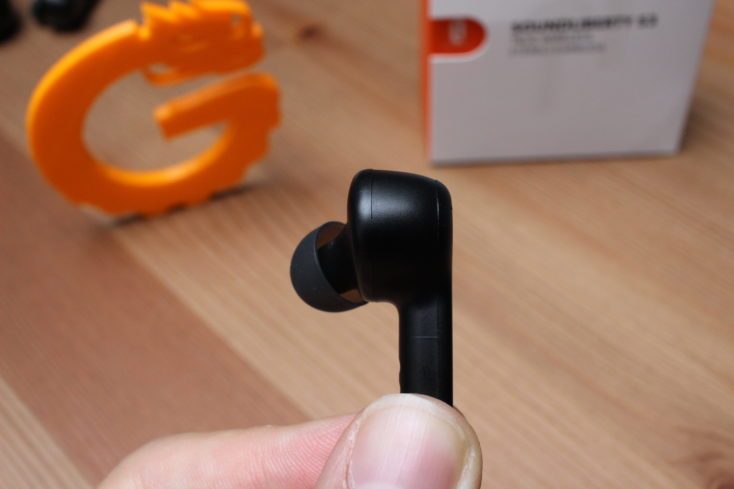 In everyday life and also during the sport I had no problems with falling out listeners and had to readjust only rarely – very good!

As it’s now almost standard, the TaoTronics Soundliberty 53 is equipped with touch buttons instead of push buttons. These are located on the back of the handset at the height of the logo.

In the test, the touch buttons reacted reliably and allow a very simple operation of the wireless in-ear headphones.

Pairing between smartphone and headphones is as easy as ever. If you take the headphones out of the charging box, they switch on automatically and switch to pairing mode.

If they have already been connected to a device, they automatically connect to the last paired smartphone if it is within range. If this is not the case, the wireless in-ear headset can be found in the Bluetooth devices on the smartphone. In the test everything worked without any problems and reliably, I have nothing to complain about.

Thanks to the current Bluetooth 5 chip, the Bluetooth range is stable over relatively long distances. In the test on free space there were connection problems only at a distance of about 15 meters, a very good value. In closed rooms it is a little less, depending on the obstacles.

The TaoTronics Soundliberty 53 doesn’t quite approach the range of the 1More Stylish or Meizu Pop 2, but the TaoTronics wireless In-Ear doesn’t cause any problems in everyday use! 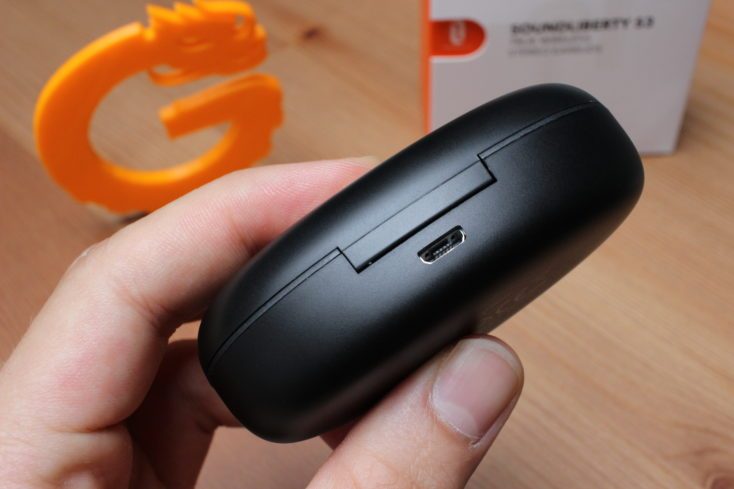 The recharging of the handset takes about 45 minutes. The charging box can be used to listen to about 35 hours of music without the need for an electrical outlet.

The TaoTronics Soundliberty 53 are an affordable alternative to the Anker Soundcore Liberty Air. Although they are a bit cheaper in terms of the materials used, they only cost about half as much. They are very similar to the TaoTronics TT-BH052 in terms of sound, but they are marginally stronger in the bass range. Overall, I like the balanced sound quite well.

In the range of the Bluetooth range and the battery we could achieve solid results in the test, there were no nasty surprises, as usual from TaoTronics.

I also like the complete operability with the touch panels on the backs of the handsets. Even manufacturers like Xiaomi or Anker Soundcore can cut themselves a slice here.