1 Kommentare July 25, 2019by Jens
Hey, guys! Just a heads up: The linked offer is already a bit older and the price of the gadget might have changed or it might not be available anymore.

The Tbao brand monitor serves as a mobile display for smartphones, laptops or video game consoles. Thanks to its integrated battery, it can even be used on the go without an external power source. We ordered the monitor from GearBest and tried it out. 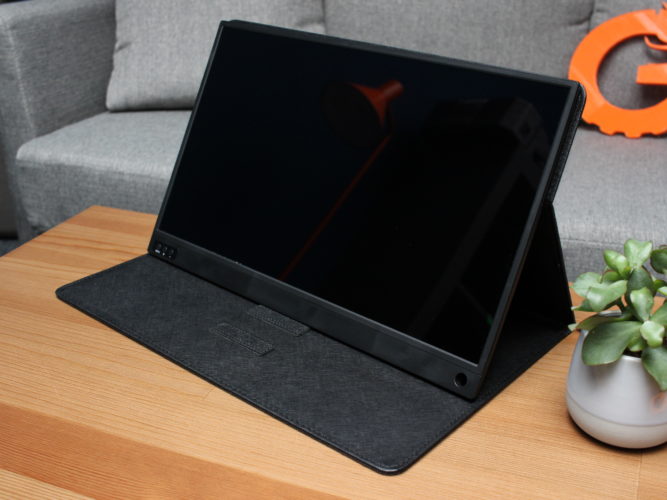 Why an additional monitor?

I already asked the same question in the test of the WIMAXIT USB-C monitor. The answer is the same here: If you work a lot on the computer, a second monitor is almost essential. Whether you’re reading something while writing at the same time, or just need to have two documents/websites open at the same time, two monitors are a hundred times more convenient than always having to switch between two windows. At the latest, if you add a chat that you want to keep an eye on, it’s almost impossible without a second screen.

Exactly for all these purposes an extra monitor is meant. The Tbao monitor also has the advantage of being mobile. This turns the laptop into a multi-screen workstation.

The comparison with the screen of WIMAXIT, which we tested two months before, is obvious for us, of course, so I will mention it here several times. Basically, both monitors are similar at first glance: The Tbao monitor also measures 15.6 inches, has two USB-C ports and largely has the same characteristics when it comes to the actual display. But let’s start at the very beginning. What you see first is the protective cover of the monitor. The outside is not leather-look, but covered with fabric. That pleases from the Haptik and looks in the bright grey also chic. Unlike the WIMAXIT, this cover can even be removed. It is fixed with two screws on the back, which are also clearly visible. Nice detail or disturbing to the overall impression – everyone has to decide for themselves. 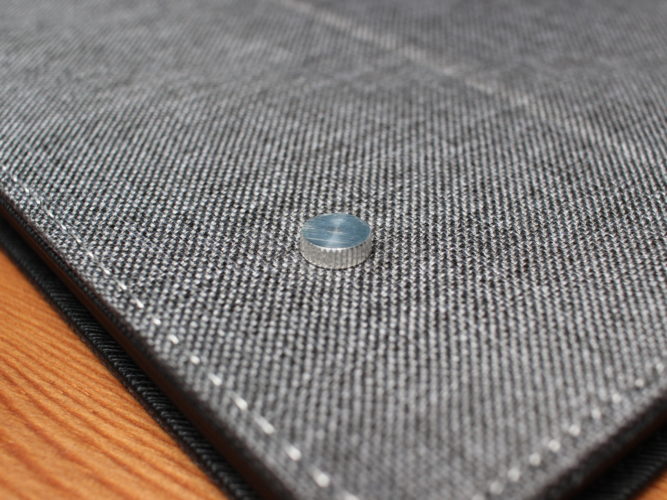 When opened, the cover serves directly as a support to set up the monitor. There are three adjustable steps, from almost vertical to an angle of about 45°. As the monitor stands on the support, there is almost nothing that can slip.

The connections are on the left side. Here we find two USB-C ports, one for data transfer and one for power supply only – more about that. There is also a micro HDMI input, which can also be used for image transmission. A micro-USB port is designed to connect accessories such as a mouse. Interestingly, there is no headphone connection. The processing of the connectors is top on the outside, there is nothing to complain about. 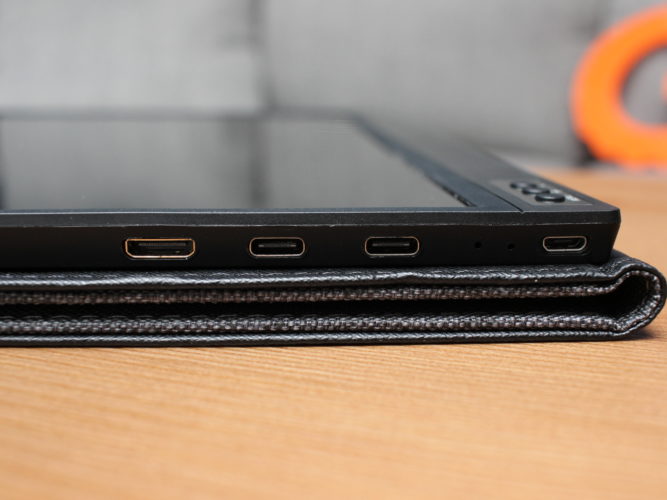 The buttons are located on the front panel. The Tbao monitor has only three buttons, one menu button and two to adjust the volume and navigate the menu. The side mounting might have been a bit more elegant, as you wouldn’t see the buttons like that; but they’re not really annoying at the front either. Exactly opposite, on the very right side, there is an element that can probably be called a design decision. Here, there is a hole with a diameter of about one centimeter in the case of the monitor. 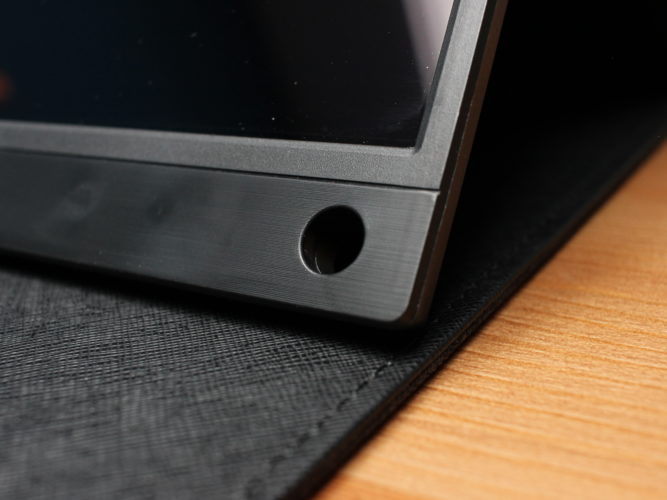 Two loudspeakers are installed in the monitor. These are located halfway up on the back so that they are no longer covered when the cover is unfolded.

The monitor is available in two versions, one with integrated battery and one without. We have the monitor with battery here, but at least on the outside both models don’t seem to differ. The only indicator of the battery level is a small LED on the left side, directly under the connectors. If it flashes red, the battery has to be charged. During the charging process, it glows continuously red and switches off as soon as the battery is fully charged. A second LED below indicates whether a signal source is connected. In this case it lights blue.

According to GearBest, the battery has a capacity of 3,000 mAh. This should be sufficient to be able to use it for up to three hours. This value is not quite reached in practice, but the battery can easily last two hours. It can also be recharged on the go with a Powerbank; the only condition is that the Powerbank has 15W. This can be done for example with this cheap model of the brand OMARS or Xiaomis Powerbank 3.

The loudspeakers do a good job for the fact that they sit in a very thin housing and deliver extremely little power with 1.5 watts. The sound isn’t tinny and doesn’t scratch, it just lacks some volume. If you have a laptop with better speakers, you can simply select them as your output device. But for video calls or occasional YouTube videos, the sound is absolutely sufficient. Even when gaming it doesn’t bother me as long as I don’t play games with epic soundtracks or explosive sound effects.

On the other hand, it’s a bit annoying that there’s no easy way to adjust the volume. No problem on the laptop, I can adjust it here in Windows without any problems. With consoles, I don’t have the function and have to navigate to the sound settings via the menu of the display each time. The settings are also not saved, and the volume is 80% every time I turn them on, so I had to turn them down every time I started. Not a dealbreaker, but annoying in the long run. It’s also a shame that there’s no headphone jack – why?

The required cables are conveniently all included. This is – I mentioned it on the last monitor – especially handy in the case of the HDMI to micro HDMI cable, because you don’t necessarily have it at home. The cables in detail are:

The USB-A cable is intended to be used as a power cable; a power plug is also provided for this purpose. The adapter is of acceptable quality, but you probably have one at home anyway: A USB adapter for the power outlet is included with every smartphone. 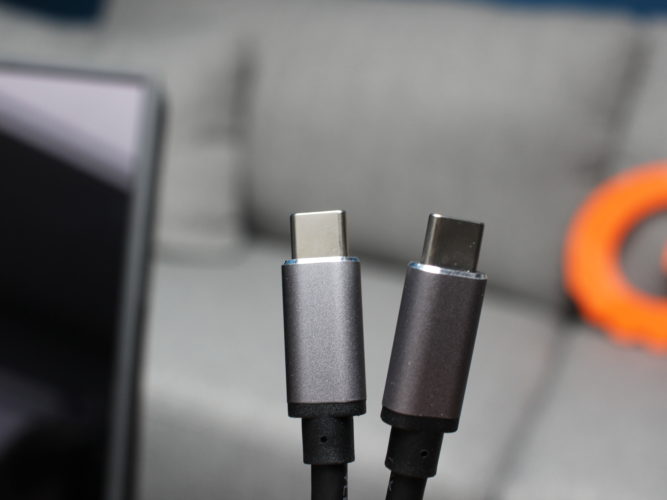 As with the WIMAXIT monitor, the cables with one meter are unfortunately somewhat short. After all, the HDMI cable can be laid a bit better with 1.50 meters. Otherwise I like the cables very much, also in terms of workmanship.

The enclosed manual is in English, but it is poorly translated in several places. There are a lot of spelling mistakes and some parts have to be read several times before you can understand them. At least there are lists of compatible smartphone and laptop models.

As mentioned at the beginning, the display is 15.6 inches in size and thus corresponds to a common display size for laptops. The resolution is 1920 x 1080p, i.e. classic Full HD, with an aspect ratio of 16:9. The menu button takes you – surprise – to the menu, where you can adjust brightness, contrast and more and choose from different colour profiles. While the monitor has a slight yellow cast in the standard settings, this can be adjusted without any problems. I really like the colours, and the brightness can also be adjusted enough to find the right setting for every light indoors.

The display reflects noticeably, but this only becomes a problem in strong ambient light. Sitting in the sun, for example, is not advisable, as you won’t recognize much. Basically, the monitor can also be used outdoors and is still bright enough.

As already mentioned, it’s a touchscreen. It is only supported when connected via USB-C; if you only use the HDMI cable, you have to do without the touch option. The touch function of the Nintendo Switch is also not supported. But as a second monitor on a laptop, the Tbao screen can be operated with the fingers. If you lay it flat on the table, you can theoretically even use it as a drawing tablet.

However, the sensitivity of the display could be a bit better. For my taste, you always have to press a little too hard on the display to recognize the touch. Here I liked the WIMAXIT monitor better.

As already mentioned, the monitor can be used with a laptop, mobile phone or console. As a second monitor for the laptop it does a very good job. With 15.6 inches it has one of the usual sizes of laptop displays and fits so well to my Mi Notebook. The three steps also allow you to adjust it roughly to the inclination of the laptop.

The laptop can be connected via USB-C cable as well as with the included HDMI cable. Only via USB-C you also have the touch function. But those who don’t need it are well served with the slightly longer HDMI cable. The power can also come directly from the laptop via an additional USB cable when the monitor’s battery is empty.

Once connected, the monitor is immediately recognized as a second display under Windows 10 and can be used accordingly.

Gaming on the road

When connecting it to the console it wasn’t always so easy. If you want to connect the Nintendo Switch to the Tbao monitor via USB-C, you often can’t switch on the display in battery mode. If you start the display with an external power source and then remove it again, it also works in battery mode. With Playstation and Xbox (or Switch with Dock) the problem is almost superfluous, because you need a power outlet for the consoles anyway.

An important factor especially in gaming is Inputlag. I can’t see that on this monitor. Mario Maker 2, where frame-accurate inputs are important for some levels, can be played on the switch without any problems.

Basically I am also very enthusiastic about this monitor. I already liked the WIMAXIT 15.6 inch screen, and the Tbao monitor simply costs almost half as much with almost the same equipment. Sometimes it even has some advantages, such as the integrated battery and the in my opinion more beautiful protective cover. Disadvantages are the missing headphone connection and the somewhat cumbersome operation.

If you only need a second screen for working on your laptop, you can definitely buy the Tbao monitor. And if you can do without the integrated rechargeable battery, you can save a little. Even for other purposes, like playing mobile games, it is still a good choice at this price.