0 Kommentare April 13, 2018by Thorben
Hey, guys! Just a heads up: The linked offer is already a bit older and the price of the gadget might have changed or it might not be available anymore.

The market for tablets has stagnated recently. This means fewer innovations. Because of the overall good specs we have been keeping an eye on the Teclast Master T8 Tablet for quite some time. The special feature for us was the fingerprint sensor, which is almost unique in the price class. But we want to take a closer look at whether the device can meet our expectations!

A really extraordinary tablet has seldom come to our attention before. As with smartphones, a certain aesthetic has established itself, which Teclast does not deviate from here either. It is most reminiscent of the Samsung Galaxy Tab A series, especially the white version, as the Teclast is also equipped with a white front. The two margins are significantly thinner than the top and bottom of the screen. However, we would not speak of “rimless” here. A borderless design is not as desirable with a tablet as with a smartphone.

The 8.4-inch display takes up most of the front. Above it is the front camera, on the lower edge of the screen is the home button including fingerprint sensor. The various connections are distributed somewhat unusually on the housing frame. This has the same colour as the back, but is separated from the front and back by a thin silver stripe. The memory card slot is located at the bottom, the volume keys and the power button on the right, the USB type C connector and the 3.5 mm jack connector are located at the top.

If these are not found immediately, small markings on the back give the corresponding information. Otherwise there is almost only the camera on the champagne-golden back. Only the Teclast logo, model name and memory information are added. The back is slightly matted and gives the whole tablet a very high-quality coating. Since the back is slightly rounded towards the sides, the Teclast T8 is really comfortable to hold. Due to the small size you can even hold it in one hand if you want. 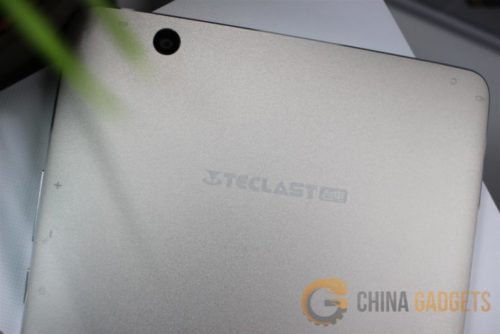 Teclast knows its trade and supplies a really well-made tablet. No sharp edges, the gap dimensions are as they should be and the handling is easy. Only the top side with the two connections looks like retrofitted. If this unit had been better integrated into the overall picture, I might grade this an A.

In general, there are only two options for tablets. Either one is content with approx. 8 inch screen diagonal or sets on a 10 inch display. The Teclast Master is available in both versions, but the version tested here (T8) is based on an 8.4 inch display. This works with a resolution of 2560 x 1600 pixels, thus with a WQXGA resolution. This is an LTPS display panel from Japan Display, an improved TFT display. This allows for better resolution, higher pixel density and is more compact. 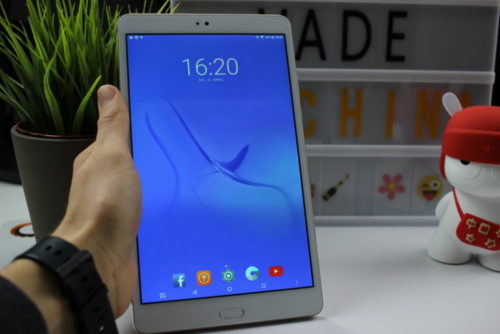 So much for theory. In practice it can be said that the display is not a decisive purchase reason for or against the Teclast Master T8. Overall it is useful, but the color reproduction is modest for my perception. The colours just don’t look as rich and vibrant as they could be, but always a little pale. Thanks to the high resolution, however, the sharpness is so good that the panel displays icons and fonts very well. The display is only really fun at full brightness, but in the middle setting it is still OK. A bit more problematic is that in some situations the display reflects too much. Overall, the viewing angle stability is rather mediocre.

Six cores – but no gaming tablet

In the base is the MediaTek MT8176, a six-core processor consisting of two clusters. The dual-core Cortex A72 cluster with a clock frequency of 2.1 GHz virtually provides the power, while the quad-core Cortex A53 cluster is intended for normal operation. The advantage here is the big.LITTLE architecture, which can also use all 6 cores simultaneously. Teclast adds 4GB of memory that easily handle multitasking tasks. The internal memory of 64 GB can be expanded with a microSD card. The PowerVR GX6250 is used here as GPU, which is a thorn in our side. After all, the GPU is almost five years old, yet the Teclast T8 is still called a “gaming tablet”.

And unfortunately, it’s not. If you want to play really well with your tablet, you’ve come to the wrong place. But that doesn’t mean you can’t play with it altogether. Smaller games like Rider can also be played smoothly with the T8. Quitting and switching to another app with multiple, open apps is also no problem. But if you put sophisticated blockbusters like PUBG Mobile on your hard drive, it looks a little different. We were able to play the game, also quite fluently, but only on the lowest graphics settings. 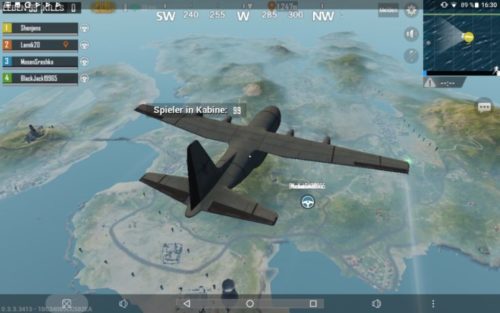 If you use the tablet “normally”, that is for social media, apps like YouTube or Netflix and surfing with the browser, the performance is in the solid midfield. One has neither the impression that everything goes particularly fluently or fast from the hand, however also the opposite does not occur. I really liked the multitasking here. Overall, I would definitely deny the Teclast Master T8 the reputation of a gaming tablet, but the technical equipment is well suited for everyday applications.

The single score in the Geekbench Benchmark (left on the picture) is quite good. This is probably due to the strong Cortex A72 cluster. In the multi-score, the CPU can’t compare because of the “only” 6 cores compared to most octa cores. The AnTuTu benchmark is also pretty good, even better than a Helio P23 processor with eight cores, as in Blackview BV9000. 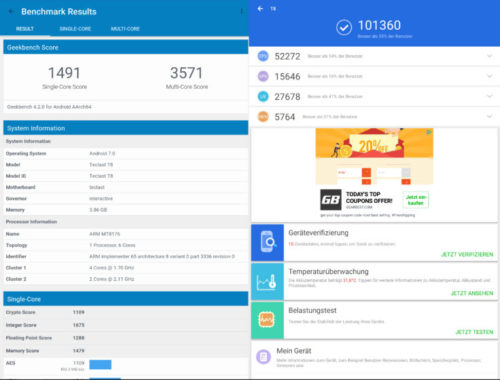 While a front camera makes sense with a tablet because of video telephony, the camera on the back is probably rather a nice extra. This weighting seems to be similar to that of Teclast.

Because the front camera produces respectable selfies, the sharpness is ok, however, also a slight image noise is recognizable. For video telephony this is also enough, for a fast selfie certainly also, but not more. The camera on the back is below average. The autofocus works slowly, the image rushes strongly and the app is also very spartan, so taking pictures with it is hardly fun. 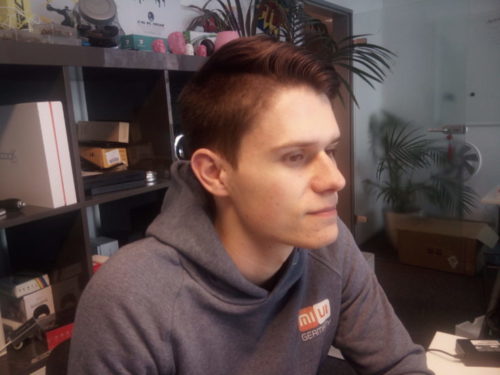 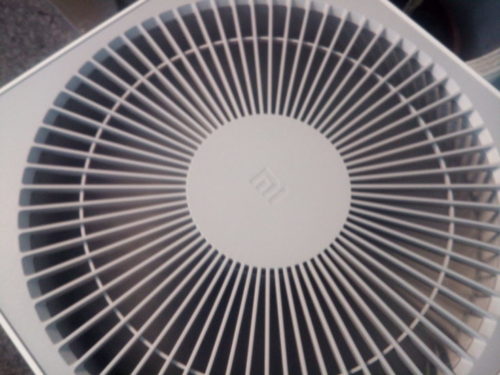 In contrast to its big brother, the Teclast Master T10, the manufacturer uses a much smaller battery in the T8. The case contains a 5400 mAh lithium-ion battery that supplies the tablet with power. Of course, only a smaller display has to be operated here, which explains the lower capacity. Nevertheless, the battery life is very solid overall, with about 8-9 hours on-screen time I would say that you have to charge the tablet once or twice a week when using it sporadically. Such a charging process then takes a good 2 hours and 30 minutes.

The Teclast Master T8 Tablet runs on Android 7.0 as delivered and this does not change (unfortunately). During the test period, two updates were available via Teclast OTA, but they only kept the security updates up to date. This is now at the beginning of April. It is to Teclast’s credit that they do not install any bloatware, i.e. their own apps or useless software. However, they do make some adjustments to the operating system. Operation is via the on-screen buttons. In addition to the three familiar navigation keys, Teclast adds a screenshot key. 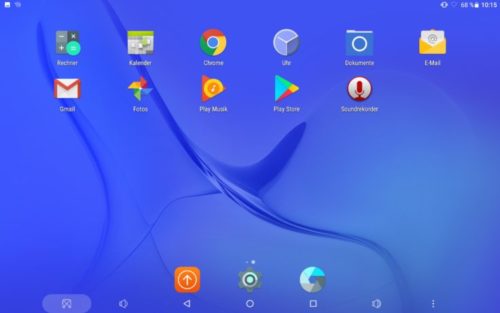 But the biggest thorn in my eye is the control menu, which you open by a swipe down gesture. This is not adapted to the screen, but apparently intended for smartphones. After all, it also opens where you put your finger on for painting. It can still be used, no question, but it looks a bit unattractive.

Everything you need – but no mobile data

As mentioned above, the Teclast Master T8 has two connectors: the USB Type C connector for charging the tablet and the 3.5 mm jack connector for use with headphones. The microSD slot is also very practical. Even if the internal memory of 64 GB is already relatively large, the SD card slot allows an expansion of 256 GB. However, it is a pity that this slot does not offer the possibility of inserting a SIM card. The VOYO I8 Max is definitely ahead.

Accordingly, the Teclast does not support mobile data. For Internet access, you have to rely on local networks. The Teclast Dual Band supports WiFi, i.e. 2.4 GHz and 5 GHz networks. The tablet also supports Bluetooth 4.0, but not GPS.

One of the Teclast Master T8 Tablet’s special features is the fingerprint sensor located on the front. The big brother, the Teclast Master T10, has it on the back. The fact that it is in front here makes sense because of its smaller size. The sensor does not reach the best times in unlocking, but it works reliably. The fingerprint sensor is well positioned for both horizontal and vertical use.

When it comes to packaging, Teclast deserves a lot of praise. The T8 comes in a white box about one and a half times the size of the tablet itself. This is separated in the middle by an orange stripe and can be opened, but the lid cannot be removed completely. The main content is of course the tablet itself. To the left of it is a small black box with USB type C charger cable and USB charger. If you lift the tablet, you will find another box below it containing the SIM needle, warranty card and operating instructions. The latter is beautifully designed and also written in acceptable English.

To be honest, I’m having a little trouble with the Teclast Master T8. Is it possible to meet my expectations, which were quite high? To be honest, not quite! On the “have” side are definitely the very good workmanship, the noble, modern design and the connection possibilities as well as the fingerprint sensor. The display is useful, not bad but also not a real bang that knocks you off your socks! Overall, the performance is definitely sufficient, but, also due to Teclast’s advertising, it falls slightly short of expectations. I think you could have got more out of it with a little smarter software optimization!