1 Kommentare December 14, 2019by Alex
Hey, guys! Just a heads up: The linked offer is already a bit older and the price of the gadget might have changed or it might not be available anymore.

The Chinese tablet market has just fallen asleep in the price segment below $200 and is littered with many bad devices. Teclast wants to change this with the new T30 and is finally installing a very up-to-date CPU. Our review shows if this is enough to deliver in the price range. 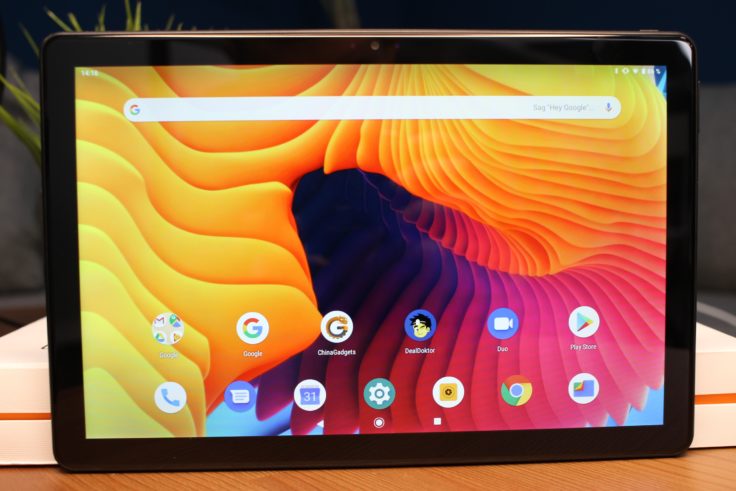 Technical data of the Teclast T30

Design: On the right track

Tablet remains tablet and this does not seem to change in the future. Nevertheless, the T30 looks much more modern than its predecessors, which is due to the matt black Colorway. With the beautifully rounded edges and the largely aluminium case, it also reminds us somewhat of the new Huawei MediaPad M6 Tablet. Unfortunately Teclast thought it necessary to label all keys and connectors. This could have been saved together with the many fonts under the “T30” and a more attractive tablet would have been available. 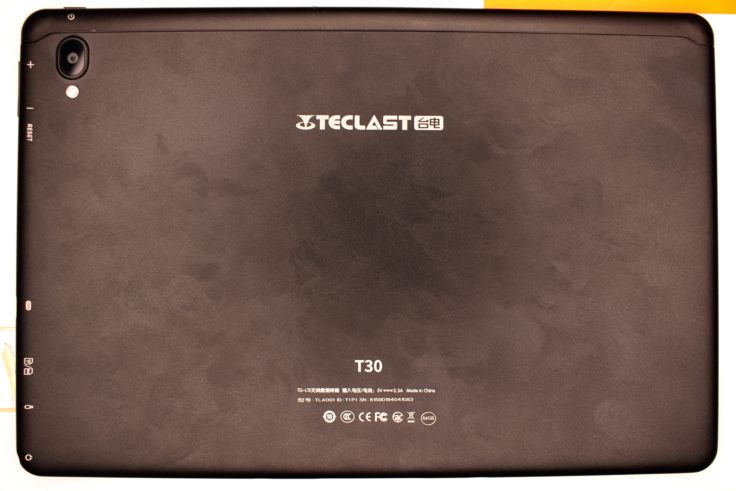 The top twelveth of the back and the top edge are not made of metal, but of plastic so that the LTE, GPS/BDS and WLAN antennas can work properly. The two stereo speakers and the power button are also located on the top. Unfortunately, only the right speaker works with our test device, so the left one is either defective or not available. But as other test reports report good stereo sound, we assume that the device is defective. 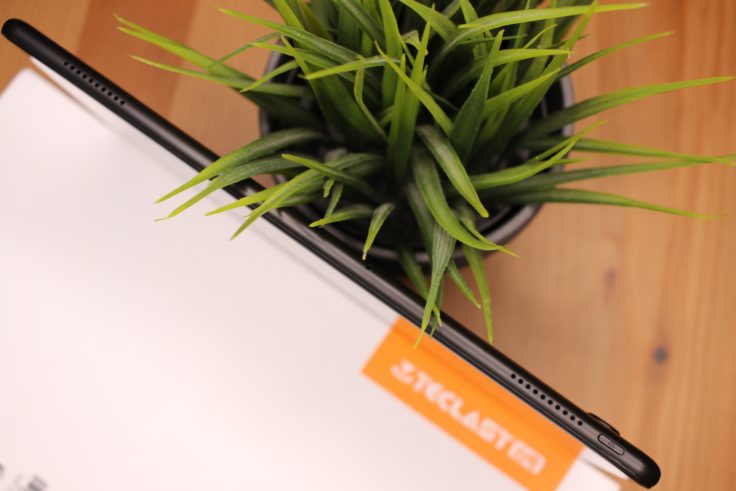 On the right side, the volume rocker is located at the top and the USB-C connector at the bottom, the hybrid SIM slot and the headphone connector at the bottom. At the bottom there are five golden contact points and two notches for the separately available keyboard cover. The overall workmanship is fine, but the gaps could be smaller in places and the plastic volume rocker and power button wobble slightly. Due to the aluminium back, the T30 feels more valuable than it actually is. 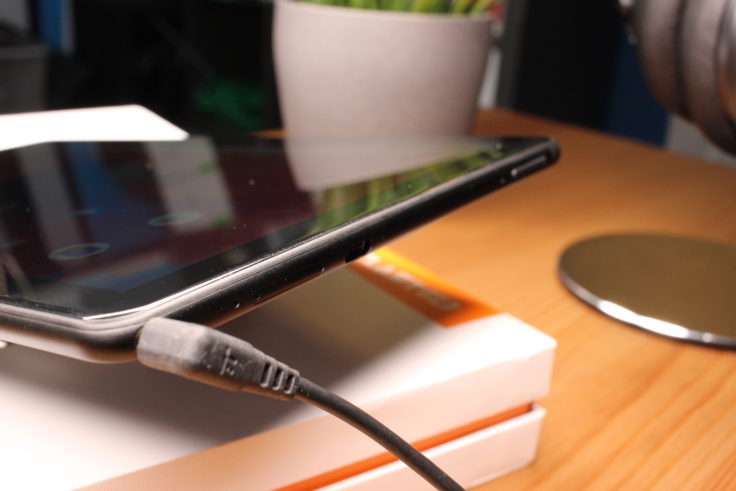 The display is a normal 10.1 inch IPS LCD with a resolution of 1920 x 1200 (WUXGA). This gives you an average sharp image with 224 PPI (pixels per inch). Especially the aspect ratio of 16:10 is very good, e.g. to display two full text pages next to each other, because it is a bit higher than the 16:9 aspect ratio. The display panel is also laminated directly to the glass, so there is no gap between the glass and the display. Colors are strong but not unnatural, the display is sharp enough and also the contrast is good. The screen edge around this display is relatively small, it shouldn’t be much smaller with a tablet. It’s black and offers a proximity and light sensor as well as a status LED on the upper side in horizontal mode, for example. 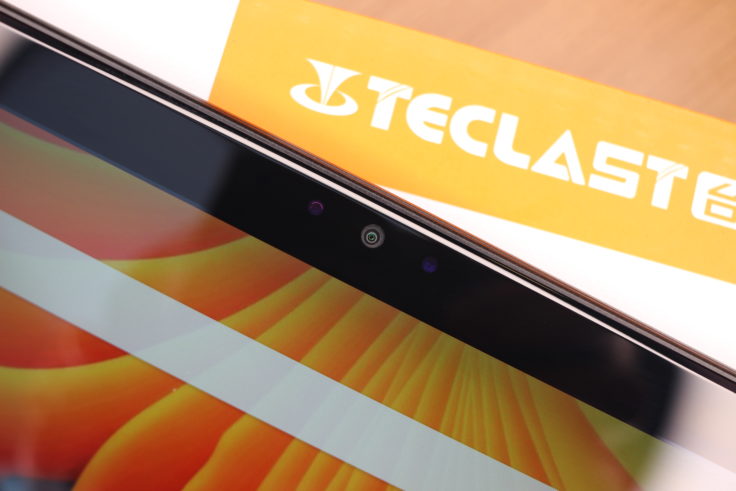 Unfortunately the screen has two blatant errors: The panel runs with a refresh rate of only 54Hz (60Hz is normal) and the touch screen reacts badly. Due to the low refresh rate, everything looks a bit slower than normal, as you are often used to 60Hz from your smartphone and PC monitors. Like 90Hz in the current flagships for extremely smooth display provide, 54Hz have the reverse effect, even if only 6Hz “missing”. In addition, the touch screen has a large delay (latency). Some wipe gestures are also recognized as typing, so that you unintentionally start apps or perform other actions.

In this case the display is also installed the wrong way round, so that some apps are displayed the wrong way round. However, this only applies to apps that only run in landscape format and can be fixed with this app. Nevertheless, such a stupid mistake naturally generates a lot of distrust in the tablet. So the display is quite good in terms of resolution and display, but the touchscreen and 54Hz make the tablet more or less unusable for games that require fast, accurate input.

Unfortunately, many tablet manufacturers from China have been using almost the same hardware for quite some time. The Helio X20 series from MediaTek is simply no longer up to date. All the more reason for us to be pleased that Teclast has integrated the very new MediaTek Helio P70 processor here. We already know the CPU from the UMIDIGI S3 Pro and it provides a good performance, which thanks to the ARM Mali G72 GPU is even enough for demanding games. The Octa-Core consists of a Cortex A73 Quad-Core Cluster and a Cortex A53 Quad-Core Cluster and offers a clock frequency of 2.1 GHz and 2.0 GHz. The main memory is still just enough with 4 GB, here we would have wished for at least 6 GB. The internal 64 GB memory can be expanded with a microSD card.

In practice, the Teclast T30 runs pretty well thanks to the P70, at least if you ignore the screen problems. Apps run well and games run smoothly, even if only on medium graphics settings. Multitasking also works, but due to the slow LPDDR3 memory it’s not as fast as on other systems. During longer gameplay the tablet gets slightly warm and unfortunately also starts to reduce performance. However, if you only play “light” games, you won’t notice that. Overall the performance is comparable with a Snapdragon 660, which is also in the direct competition, the Mi Pad 4 (Plus).

The Teclast T30 runs with Android 9 Pie and fortunately does completely without bloatware, only the normal Google apps are pre-installed. The Google Play Store is certified and the whole system runs multilingual. If you want, you can find the Google Feed to the left of the Home screen and the icon form can also be adapted. 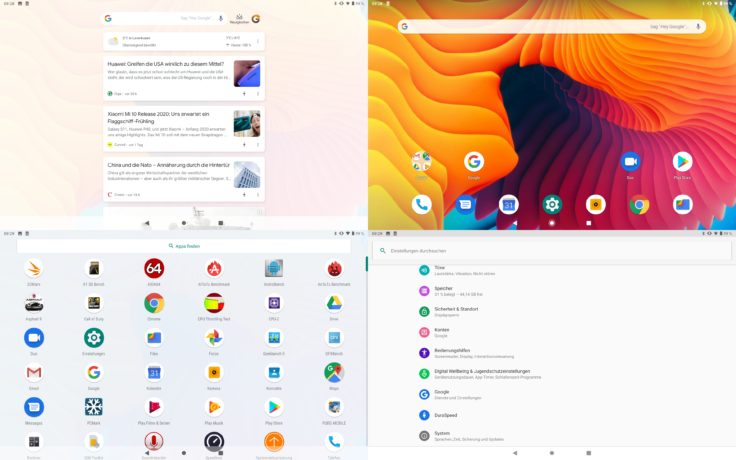 The settings were also hardly changed and actually only Duraspeed was added. If you don’t like the launcher or don’t have enough features, you can of course install another one, but I didn’t do that in the test. Only the security patch from July 2019 is really negative. There could be another update here, but I don’t expect a big update to Android 10.

Of course, the focus of a tablet is not on the cameras, but the T30 is still below the level of a Redmi 8A for $100. The main camera consists of a Samsung sensor with 8 MP and a f/2.8 aperture. In my opinion, you shouldn’t use tablets for photos anyway, and Teclast makes sure that you really don’t want them because of their poor quality. As an emergency solution for video calls it is at least available, but nothing more. 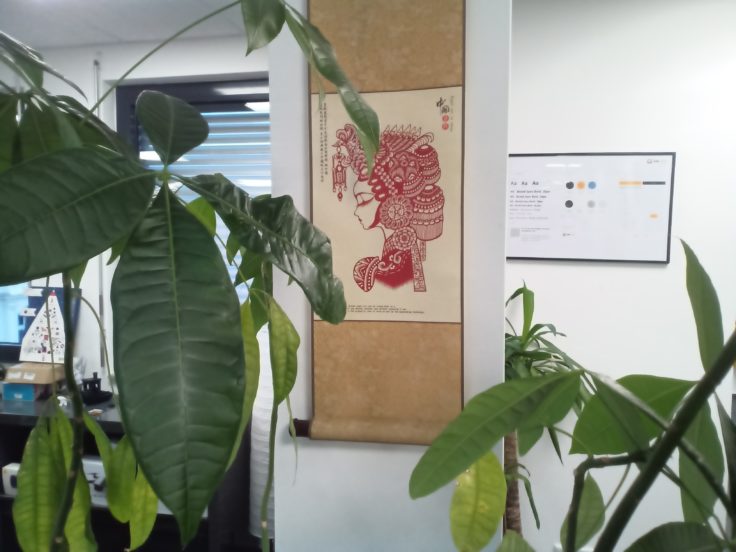 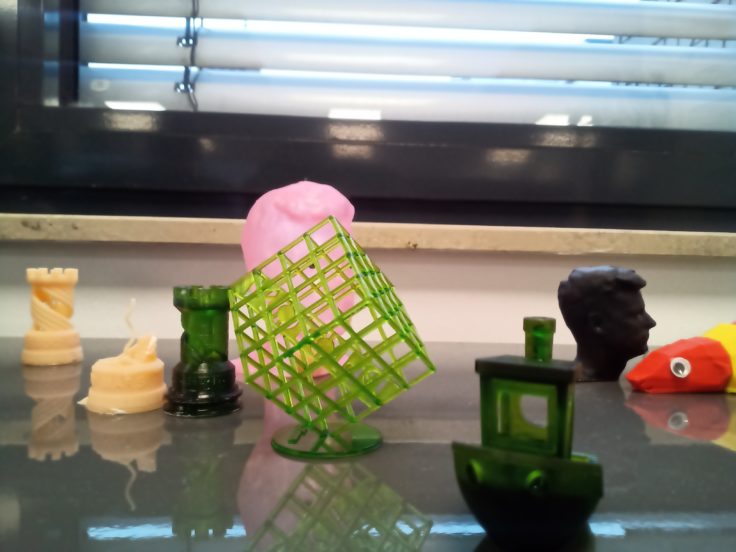 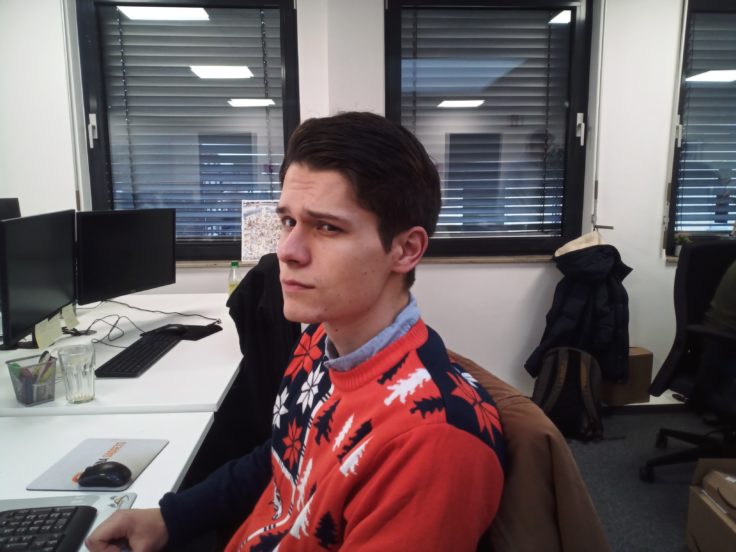 The more important front camera for a tablet is unfortunately even worse with 5 megapixels and a f/2.8 small aperture. This is also only an emergency solution for Skype, but nothing more. 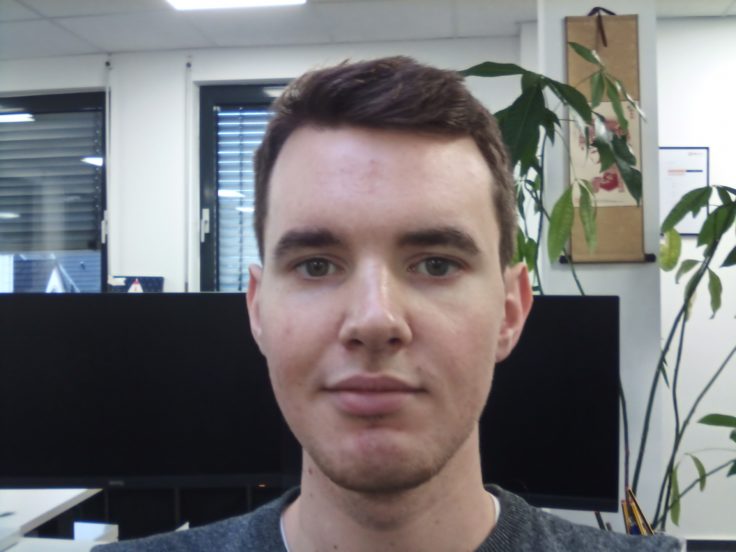 Although the battery of the direct predecessor (T20) is 100 mAh larger than the 8,000 mAh capacity of the T30, this is put into perspective again by the significantly more energy-efficient processor of the new generation. Teclast specifies 11 hours of video playback as a reference. In the PCMark battery benchmark we reached 9 hours and 22 minutes at half brightness. Of course, you don’t use the tablet consistently in everyday life and overall you use it much less than your mobile phone.

So I could use the T30 for 5 days until I had to recharge it. This is done via the USB-C port and the nice white cable provided. Unfortunately, the charger offers only 12.5 watts of power, currently at least 18 watts are actually standard. Therefore the T30 needs a little more than 4 hours to get from 0% to 100%. So the best way to charge it is overnight.

Although the Teclast T30 offers a SIM slot, this is rather bad than quite suitable for Europe. Only the bands 1/3/38/39/40 and 41 are available for LTE. You should rather rely on the local network to which you can connect via 802.11 b/g/n/ac Dual Band WiFi. NFC is of course not integrated, but there are GPS and BDS as well as Bluetooth 4.1. 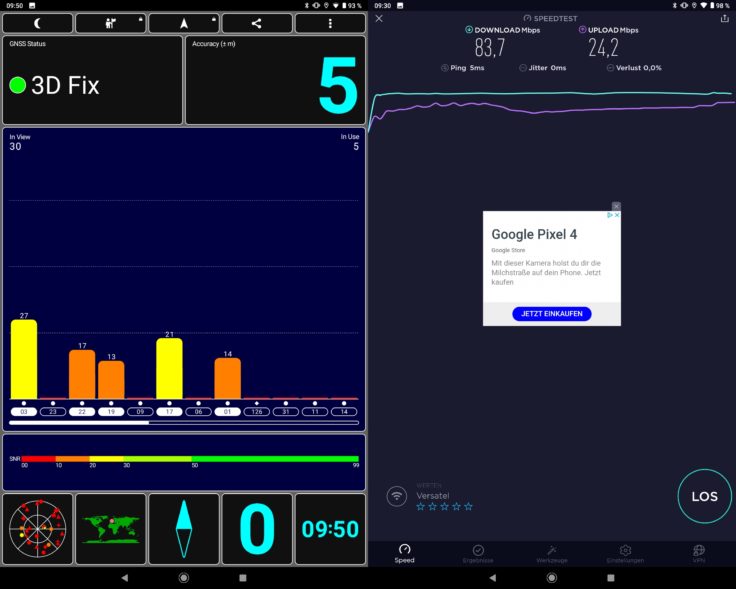 The positioning is surprisingly good, especially for a tablet, but I would probably rarely use this function. WLAN reception is also good and could certainly perform even better in a stronger network.

The market for Chinese tablets was considered to have fallen asleep for us and then Teclast finally knocks out a contemporary tablet. Good display with small edges, current and good processor, USB-C and jack, clean software and a good battery life speak for the T30. On the other hand there are the bad touchscreen, the outdated security patch, the low resolution of Netflix and Co. as well as the horrible cameras.

The question now is who to recommend the T30 to. Widevine Level 1 is missing for media consumption and the unusual loudspeaker doesn’t inspire confidence. And for productivity or gaming, the touchscreen is simply too bad. If all this doesn’t bother you, you’ll still get the best China tablet under $180.