The latest member of the Teclast family is ready and this time they release a tablet in the style of the Microsoft Surface. The special highlight of the Teclast X6 Plus is the laminated touch display with a 3K resolution (2880 × 1920 pixels). A worthy competitor for the software giant? 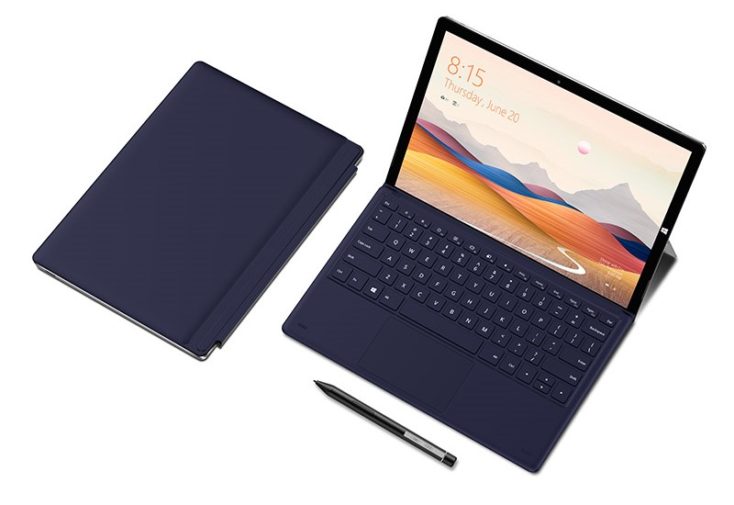 If you take a look at the new Teclast device, you will immediately notice the similarity to the Surface series. We have a tablet here that turns into a notebook with the help of a magnetically clippable keyboard. To set up the tablet, there is a large fold-out stand on the back that can be adjusted to a 135° angle. There is a camera on both the front and back for participating in video chats or similar.

At 860 g, the tablet is average and at 8 mm, it’s not too thick either. Since it is not too slim, there is also room for more ports. But more about that later.

The highlight of the tablet is the laminated 3K display (2880 × 1920 pixels). Compared to a conventional display, the individual layers are much closer to each other, which makes the content look much closer. This is especially important when drawing and writing, since there is no distance between the pen and the screen.

For drawing or painting, you can use a pen that is compatible with the Microsoft Pen Protocol. Teclast’s own pen supports up to 1024 pressure points.

When it comes to the processor and graphics card, we unfortunately take another trip to the year 2017. An 8th generation Intel processor is found inside, whereby it is probably the Intel Celeron N4100 with up to 2.4 GHz clock rate. This is combined with an Intel UHD 600 graphics card. You can’t say that this choice isn’t suitable for everyday use, but it doesn’t offer much performance. However, it will probably suffice for note taking and drawing.

In terms of memory, 8 GB of DDR4 working memory and a 256 GB SSD are provided. If you want, you can expand the hard drive storage via microSD or upgrade the SSD. A 38 Wh battery is responsible for the power supply. Unfortunately, no runtime information is given. The tablet is charged via the proprietary charging port or the USB-C port.

Besides the USB-C port, which can also be used for charging, there are several other ports. There are a total of two USB-A 3.0 ports, a headphone jack, and a micro-HDMI port. It is nice that the full USB-A ports still fit here. You can connect wirelessly with Wi-Fi 5 (AC-WLan) and Bluetooth 4.2 is also included.

Verdict: An interesting device at the right price

The Teclast X6 Plus can most likely be compared with the Surface Go series. The latter offers a similarly strong processor with a bit more performance, and probably the same target group. The Teclast X6 Plus is a device for office work, taking notes at university or for school. YouTube videos and Netflix series certainly look good on the screen.

There is no price or release date yet, but should it be below or close to the Surface Go 2, the tablet is a very interesting candidate. However, the pen and keyboard will probably not be included by default.

What do you think of the Teclast X6 Plus?