0 Kommentare September 12, 2019by Tim
Hey, guys! Just a heads up: The linked offer is already a bit older and the price of the gadget might have changed or it might not be available anymore.

The Chinese manufacturer Tesvor is often mistaken for an American company and was unknown for a long time. With the X500, they then launched one of the best-selling vacuum robot models on Amazon and made a name for themselves with it. Now the manufacturer, which has been operating since 2016, seems to want to build on the success of the X500 and is launching the Tesvor T8 on the market. 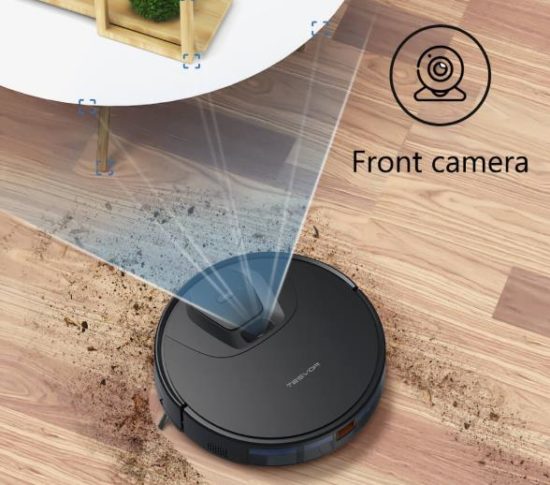 The success of the Tesvor X500 can primarily be explained by the fact that, despite its relatively low price of $200, it navigates reasonably intelligently and still has mapping included in the software package – which is rare for a robot in this price segment. The T8 is based on the X500 both technically and in terms of software, but has been expanded to include an optical lens and a wipe function.

Before (understandably) panic spreads: The camera doesn’t take optical pictures, so neither videos nor photos are taken. This is technically comparable to the Mi Robot 1S, but less chic. Despite the lack of a laser tower on the upper side, the developers have thought about this and left the robot at a low height of 8.1 cm, so that it can be placed under most pieces of furniture.

Thus the camera does not really disturb, but can improve the orientation at the walls. It now works with a combination of gyro sensor (remembers rotations from charging station) and V-SLAM algorithm (Visual Simultaneous Localization And Mapping). The latter enables the robot to create a visual map of the premises that can be called up in the app, even without a laser distance sensor.

But you can’t do too much with the created map. Apart from the live traceability of when the robot is working where, only Go-To zones (also for wiping) can be specified. No virtual walls, no no-go zones, no non-wiping areas. All this has to be controlled with the supplied magnetic tape. The OTA (Over-the-Air) process feeds the robot with firmware updates.

After all, there are three well-known suction modes available via the app (not via the remote control):

Of course, the typical functions and attributes of a vacuum robot are also included (autonomous retrieval of the charging station, scheduling of working times, etc.).

Tesvor is taking a similar step as Zaco recently with the A9S: Instead of continuing to rely on good value for money in their models, they are trying to establish themselves in the high-end sector. And they bring out a mediocre solution. Sure, for most needs and households the model will be completely sufficient, but with $350 it is also anything but cheap – measured by the range of functions.

Because the T8 is an optimized X500 with improved navigation (although not the best) and wipe function, I personally find the model far too expensive. As already mentioned, the previous models of the manufacturer have sold so often because they offer many functions for little money. And that’s exactly what the T8 doesn’t do anymore. For the price one gets alternatively a completely matured 360 S7 or also a Roborock S5. Whether and when the T8 will also be available in Tesvor’s Amazon shop is still unclear.

What do you mean: Disappointed by Tesvor or do we misjudge the model?