0 Kommentare August 3, 2019by Thorben
Hey, guys! Just a heads up: The linked offer is already a bit older and the price of the gadget might have changed or it might not be available anymore.

Among the Action Cams from China, the ThiEYE T5e enjoyed insider tip status; its successor, the ThiEYE T5 Edge, could not quite live up to its reputation. With the new ThiEYE T5 Pro you get a 4K/60 fps resolution. Competition for the DJI Osmo Action? Design of the ThiEYE T5 Pro

Similar to tablets, Action Cams will probably not change their basic design. The ThiEYE T5 Pro also looks like its direct predecessor, which is not least due to the orange accents on the front. The difference can be recognized by the reference to the 4K/60 fps resolution on the front. The arrangement of the individual elements is otherwise almost identical: camera lens right, ThiEYE logo bottom left and a power button on the upper left side. 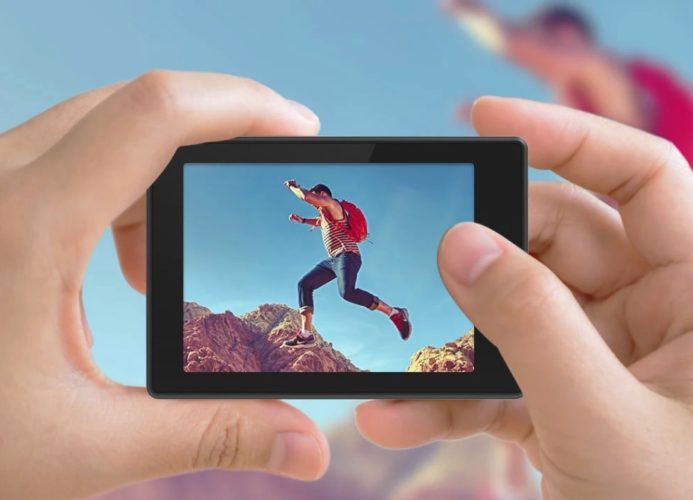 The WiFi button is located on the upper side of the housing frame, on the left the connections including micro-USB input and microSD slot, on the right two navigation keys for menu navigation (arrow up and down) and on the bottom the slot including cover for the battery. On the back side there is also a 2 inch LCD touchscreen. No information is given about the resolution, but a 960 x 240 pixel resolution as in the predecessors is also conceivable here. 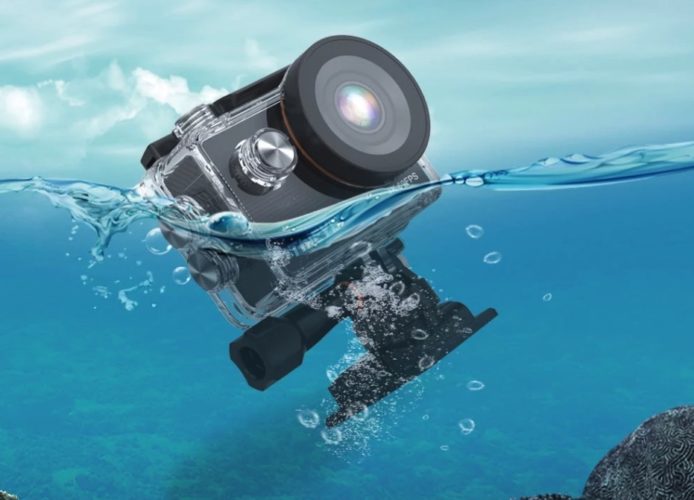 The dimensions are 60 x 42 x 23 mm and the weight is 78 g. The Action Cam itself is unfortunately not waterproof, but with the included case it is, even up to 60 m deep.

The big difference to the predecessor lies in the improved resolution and the higher frame rate in this one. 60 fps, i.e. frames per second, at a 4K resolution are so far only action cams such as the YI 4K+, DJI Osmo Action or the GoPro Hero 7. However, the Electronic Image Stabilization (EIS) is not used, it is only used at 4K/30fps or 1080p/60fps and 1080p/30fps. For slow-motion recording, you can also record at 120 fps in Full HD resolution, which allows four times slow motion. Up to 240 fps can be recorded, but then you have to live with a 720p resolution. 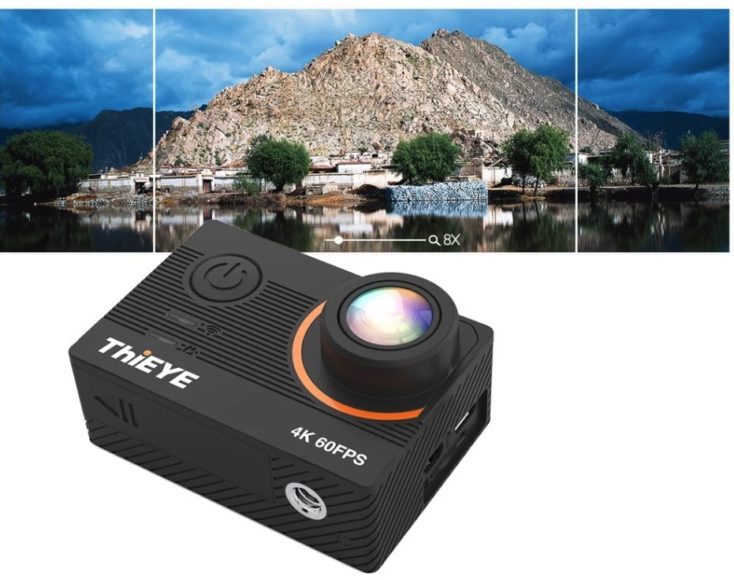 The distortion correction is also helpful to reduce the well-known “FishEye effect” a bit or to deactivate it completely. This seems to be possible in the settings, but the ThiEYE T5 Pro does other settings automatically. This includes the low-light mode, the focus as well as the white balance. Beside the photo mode with 20 megapixel resolution there is of course a burst mode, timelapse mode and long exposure mode.

Unfortunately, we don’t know which sensor the manufacturer uses in the ThiEYE T5 Pro, just as the chipset used is unknown to us. We only know that the cam can be used with a 170° shooting angle, but also supports an eightfold zoom. The aperture of the lens is given as ƒ/2.8 and the camera should also support RAW shots. 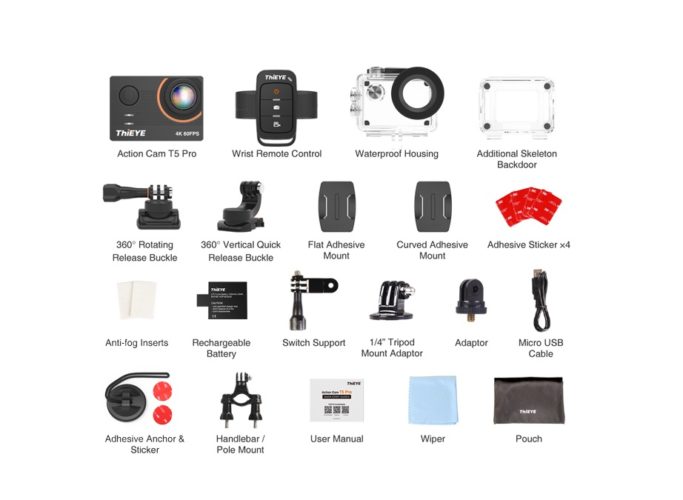 The battery capacity is on average large with 1100 mAh, the recording time should be about 80 to 90 minutes (depending on the mode). As usual with other Action Cams, the cam can also be connected to an app thanks to 802.11b/g/n 2.4G WiFi. Alternatively, you can also use the included remote control to trigger the camera.

A preliminary assessment is never quite possible with Action Cams, in the end it depends on the image quality. The question is whether this has improved noticeably and how important the 60 fps at 4K resolution are to you personally. Here only a test can deliver clear results. The ThiEYE T5 Pro is more than attractive for the offer price and we are also interested due to the generous scope of delivery. Shall we give the cam a chance or do action cams slowly disappear into the camera?