1 Kommentare January 26, 2019by Thorben
Hey, guys! Just a heads up: The linked offer is already a bit older and the price of the gadget might have changed or it might not be available anymore.

The name Mobvoi certainly doesn’t seem familiar to most of you, but you might have heard of Ticwatch before. Recently they released the TWS In-Ears with the Ticpods, now they concentrate on Wearables again. At the CES in Las Vegas the Ticwatch E2 and S2 Smartwatch were presented. This review focuses on the Ticwatch E2. 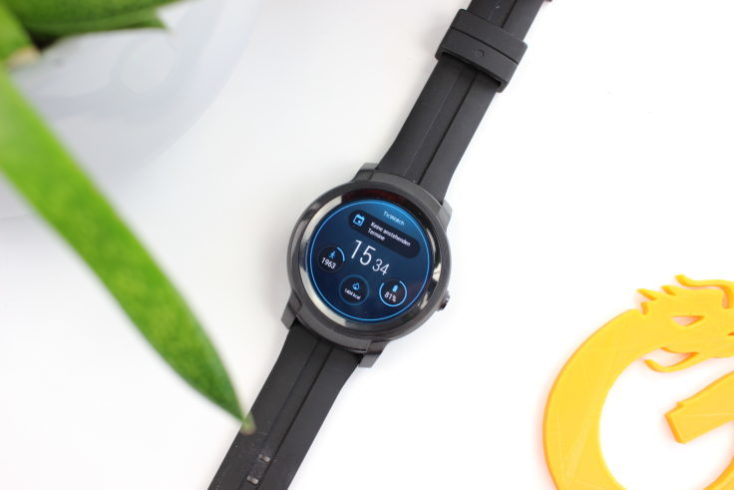 Meanwhile the company has some Smartwatches in its portfolio. We could already test the Ticwatch 2, it did a lot well, but the own OS quickly found its limits. The Ticwatch E has finally found its way into our editorial office (is already being tested) and is based on WearOS, the Smartwatch operating system from Google. They would like to follow up now.

So much is said, there are not many differences between the TicWatch E2 and the TicWatch S2. Mainly these are expressed in the optics. The center of attention is identical for both models. Both the E2 and the S2 are equipped with a 1.39 inch AMOLED touch screen, just like the predecessor. 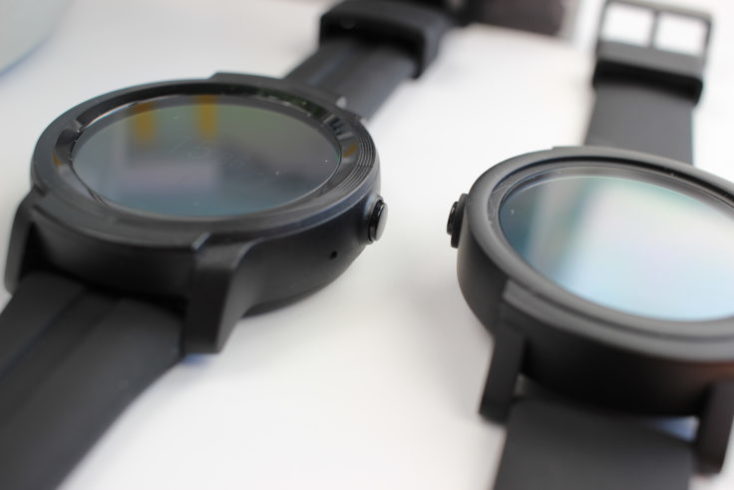 The watch body is basically the same as well, but the S2 (S stands for “sport”) sets a few more accents. With the S2 we get a tachymeter around the dial, which the E2 does without. In addition, the function key on the right side of the S2 is rectangular, on the E2 round. The silicone bands are also different, but both are 22 mm bands, which theoretically means that they can also be exchanged with each other. 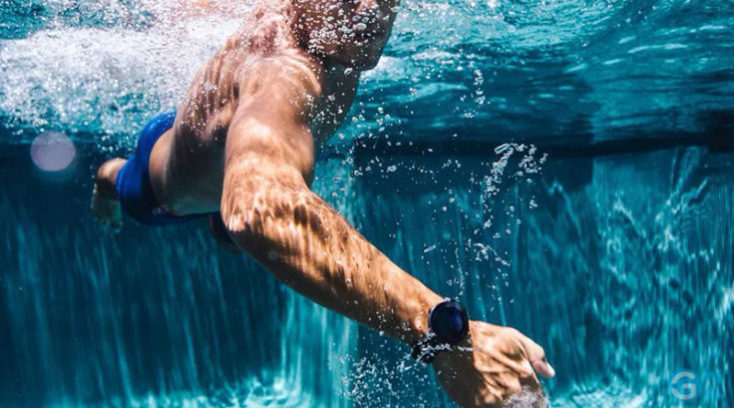 It is also interesting that both are water-protected according to ATM 5. This means that you can take a shower and swim, but you should not dive. Both watches consist of a polycarbonate case.

Unfortunately it is almost impossible to find points of criticism for the processing quality of the Smartwatches of the manufacturer Mobvoi. In the meantime, there is a lot of expertise here, which is expressed in the sophisticated and well implemented design of the watch. It’s only “plastic”, but it’s very precisely milled, so that there are no unpleasant edges or other flaws anywhere. Only the pressure point of the function key is a bit too soft for my taste, but that’s very subjective. 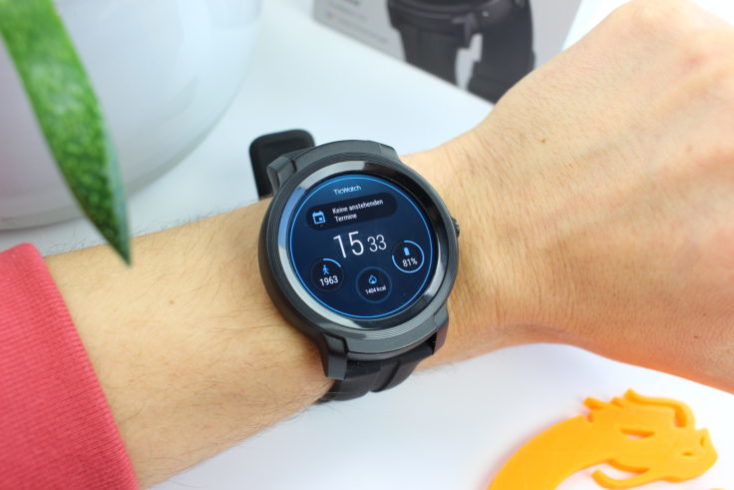 Although the Smartwatch is a bit too clumsy for a wristwatch for my feelings, the wearing comfort is still pleasant and even a bit more pleasant than with the predecessor. After the first hour of wearing, I don’t even consciously register the watch on my arm. Nevertheless, here, too, I have to make a comparison with my beloved Amazfit Bip, which is almost unrivalled in terms of wearing comfort.

The fact that Mobvoi has always relied on high-quality displays, we already noticed in the test of the Ticwatch 2. Even with the Ticwatch E2, the AMOLED screen with a diameter of 1.39 inches doesn’t make a difference. The resolution is 400 x 400 pixels and is therefore relatively high. The colors are very strong and even at the lowest brightness setting, the use succeeds without any problems. Only if you are outside in strong sunlight, you might have to adjust up a bit. 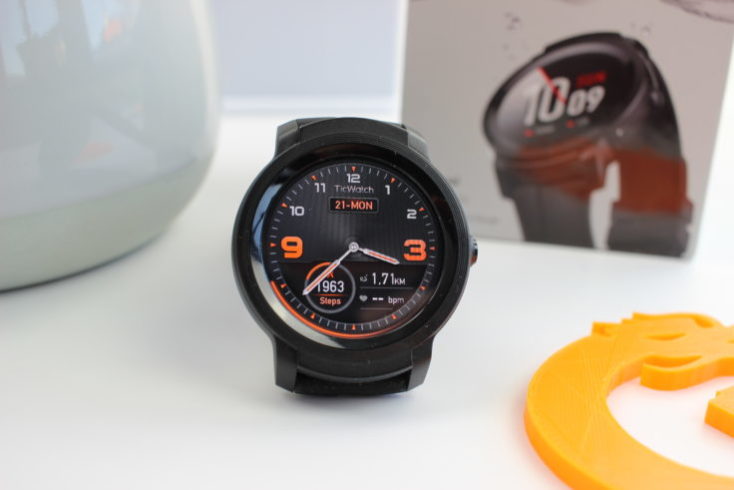 But not only the appearance, also the functionality is right. Because the response sensitivity is quite high, so navigating through the WearOS is fun. But not only that, the precision is also good. In the menu the individual menu items are not too big, but so far the Ticwatch has always interpreted my clicks as they were intended. In the rare case of text input via keyboard, this can also be done with high precision. 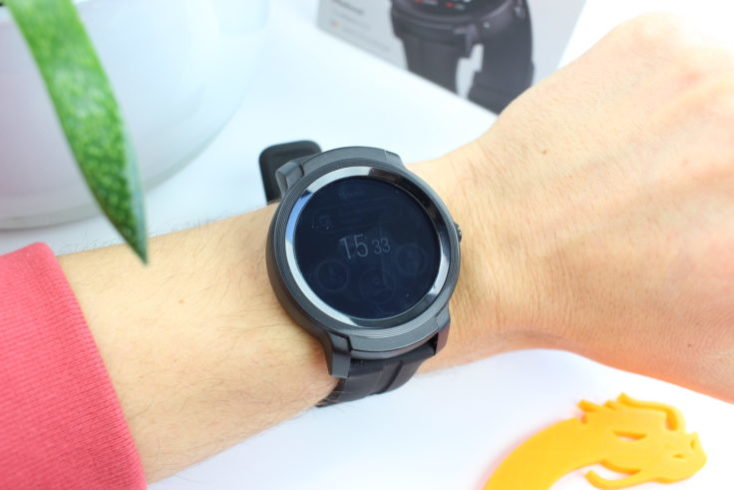 Another positive aspect for me is the possibility of Always On-Display. Since the AMOLED technology illuminates each pixel individually, an Always-On mode can be activated, as with some smartphones. This way the Ticwatch E2 shows a reduced watchface, which only shows the essential information like the time, without any color. This is more energy-saving than illuminating the entire panel, but still offers the clock function.

Technically, the TicWatch E2 and TicWatch S2 are one and the same watch. The core is the Snapdragon Wear 2100 processor, which is also used in the TicWatch C2 and TicWatch Pro. It’s a pity that the brand new Snapdragon Wear 3100 processor is not used yet. On paper that’s a significant improvement over its predecessor, where a MediaTek Dual Core does the work. Apparently, the 2100 is sufficient for the Smartwatch’s area of application – one might think.

Unfortunately, the Ticwatch E2 doesn’t run that well. The usual inertia after the first setup is quickly overcome, then the watch looks fast. But the impression vanished relatively quickly, if you install your own apps from the Play Store. After several days of use, I simply have the feeling that the RAM, which is probably 512 MB, is full to the brim. 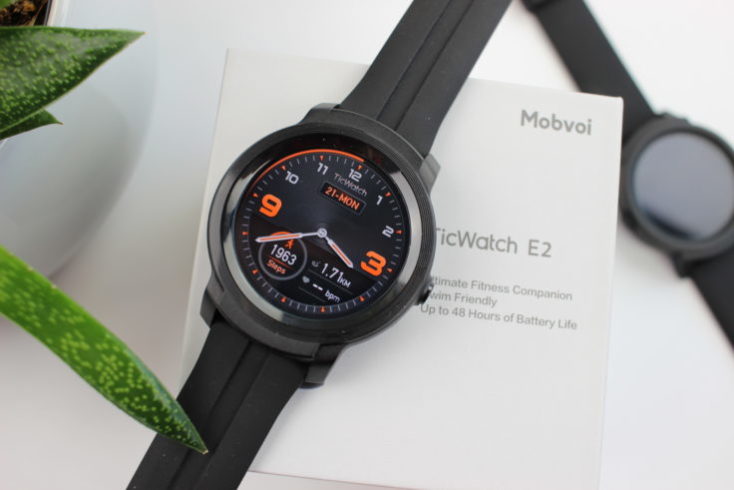 Even if a Smartwatch does not actually require such complex processes, the performance is simply not fluid. While jogging, I used the Fitness App and Google Play music at the same time, which the Ticwatch E2 thanked me for with strong delays and ignoring my input. It’s also interesting that even simple apps like the stopwatch take a good two seconds to open. That doesn’t do justice to my demands of a Smartwatch in the price segment at the moment!

I hope and strongly assume that this is still due to the beta phase in which we as testers find ourselves. The operating system has to be adapted better to the hardware and I hope that Mobvoi as manufacturer will deliver updates after releases that improve the performance.

In addition, both watches are equipped with a 415 mAh battery, which should be sufficient for a usage of about 1.5 days. In fact, I can understand the manufacturer’s statement, I came to the one and a half days also with my use. The display brightness is on the lowest setting, the Always-On display is activated and with Bluetooth connection to the smartphone. 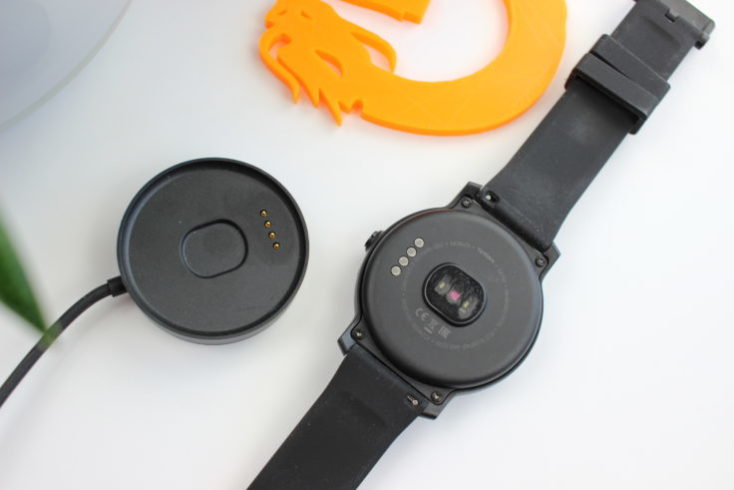 When jogging, listening to music and GPS activated, the clock has consumed about 20%. All in all it depends on how much you use the built-in GPS and the heart rate monitor. In summary, it can be said that Mobvoi has improved the battery life by a good half a day compared to its predecessor.

The just mentioned big feature of the new Ticwatches is the operating system. In contrast to many other China Smartwatches, like the Zeblaze Thor Pro, Ticwatch relies on WearOS, the Google operating system for Smartwatches and not on an outdated Android version. This is the way the Ticwatch E has already gone. 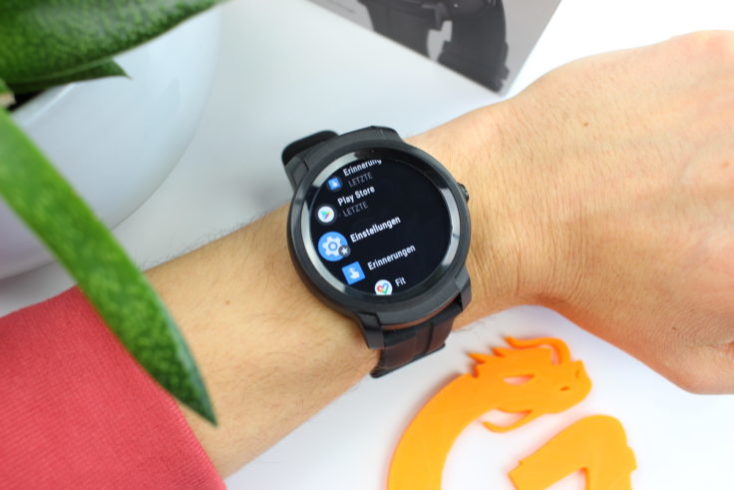 This way you not only get well-known fitness apps like Google Fit or Strava, but also other apps. Via Spotify or Google Play music you can control music on your smartphone, call via a car or even play small games to pass the time.

If you have already used a Smartwatch with Wear OS, you won’t get much new stuff here. Overall, the optical appearance of the watch is very reduced.

The main starting point of the interface is the Watchface, of which the Ticwatch E2 offers some. A wiping gesture to the left will take you to the watch’s fitness function, which provides an overview of step count and calories. The Google Assistant opens in the opposite direction, including a language assistant and a brief overview of the weather and more.

A swipe up opens the notification bar, a swipe down opens the control center, where your DeepL gets access to Flight Mode, Do Not Disturb and Brightness settings. A push on the function key on the right opens the menu, where you have to use the touch screen again to click through the different apps.

For example, if you want to listen to music, you have three apps available. Spotify, Google Play Music and an unknown media player. Spotify can’t save songs offline, you can only control another device. If you want to stream music and listen to it offline, you need to use music on Google Play. This worked quite well in my test, even though the app reacts very slowly. 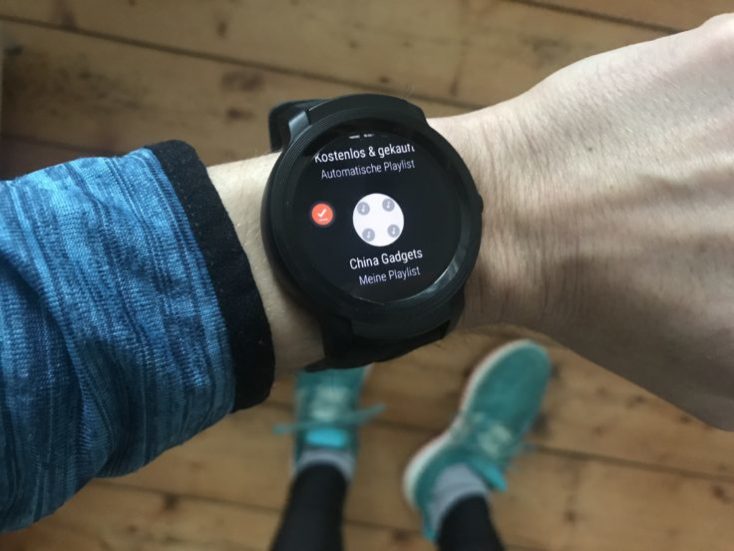 For athletes there are for example Google Fit, TicExercise and Strava. With TicTraining (TicExcercise) you have different sports modes like running indoors and outdoors, cycling, freestyle and swimming. So far I could only try the jogging mode, which worked well and shows me relevant data like time, speed, calories and distance after running. You can decide for yourself whether you want to save the activity or not. A GPS map is not created.

But there are also small games that you can download. Preinstalled are of course basic functions like alarm clock, timer, stopwatch, weather, contacts, flashlight or reminders. 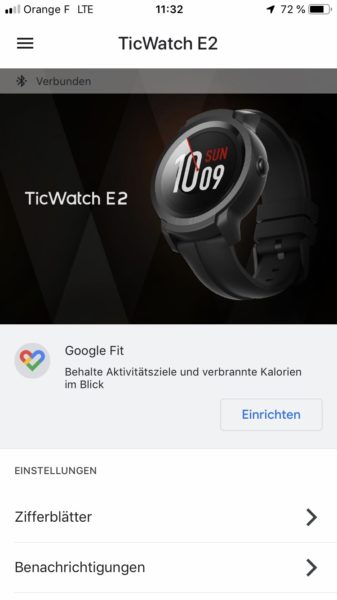 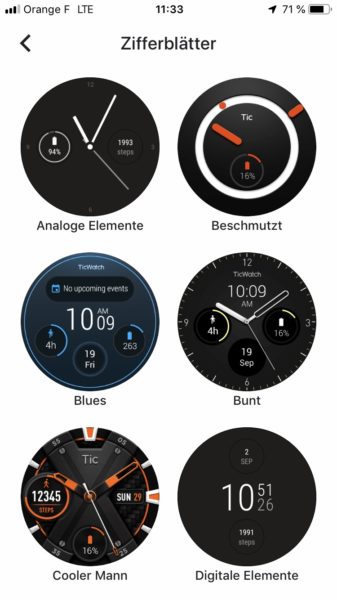 I like WearOS basically. However, the operating system is not yet really adapted to the hardware, because as described above with the performance, the OS does not run smoothly. There are too many hangers that stand in the way of a smooth performance. Here, I suppose, there is a lack of good memory management. Even killing apps doesn’t seem possible, starting apps from the menu usually takes one to two seconds – even with apps like the stopwatch. Hopefully an update will be released soon to stabilize performance.

The connection possibilities of the Ticwatch E2 and S2 are not much different than with the predecessor. Bluetooth 4.1 is used to connect to the smartphone and WiFi 802.11 b/g/n to dial into the local network. The smartphone connection also breaks off more and more often, as with my predecessor. Here you have to connect to the Wear OS App again – in my opinion superfluous and annoying.

For position determination the Ticwatch uses GPS, GLONASS and Beidou. Before jogging, the GPS fix took about 5 seconds, which I think is fine and happens faster than with the Amazfit Bip.

Much better, but not quite perfect yet

You could discuss the price. But in my opinion you get a solid Smartwatch that does a lot right. An increase in performance compared to the predecessor is definitely there, but almost only in terms of performance and battery life.

Wear OS doesn’t run smoothly enough for me personally, there’s still a need for optimization. But to be fair: the Ticwatch E2 is just now officially released. Fortunately, we were able to test the Smartwatches in advance, so we forgive the watch some mistakes. We hope that Mobvoi will invest some more time and that the Ticwatch will be improved by updates.

If you still have wishes and ideas, what we should test with the Ticwatch E2, write it in the comments. The article will be extended accordingly over time!