Tineco Pure One S12 Plus battery vacuum cleaner with display, app and 22,000 pa

0 Kommentare February 19, 2020by Tim
Hey, guys! Just a heads up: The linked offer is already a bit older and the price of the gadget might have changed or it might not be available anymore.

The Tineco Pure One S12 Plus is considered one of the best cordless vacuum cleaners on the market alongside the Dyson V11. We took a closer look at the appliance from Hong Kong. 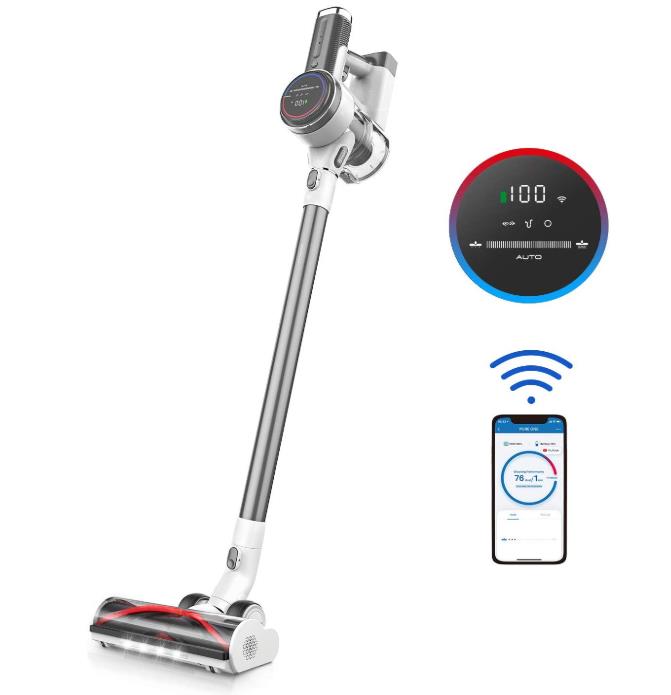 Tineco Pure One S12 Plus for $569 at Amazon – activate coupon

With the help of the iLoop dust sensor, the cordless vacuum cleaner is able to automatically adapt the suction power to the amount of dust. It should be able to measure the number of particles and adjust the suction power accordingly – resulting in more efficient use because it saves energy. The suction power can also be adjusted manually above the handle using a touch slider on the top of the handle. While most models offer a choice of one to three suction levels, the S12 Plus offers a wide range of levels thanks to the sensitive level control.

The S12 Plus also scores in terms of working hours: This is 100 minutes when using a non-motorised attachment (eco mode) and a full 20 minutes on the highest suction level. This may not sound like much at first, but compared to other models it is clearly above average. Others average less than 10 minutes. In addition, a switch on the shutter release lets you decide for yourself whether you want to lock or unlock the power button. In other words, if one wants to keep the trigger pressed continuously or leave the suction mode continuously active by pressing it once.

What you could also marvel at on the Roborock H6 is already standard on high-quality premium vacuum cleaners: a multi-coloured LED display. I can understand very well that people think that the vacuum cleaner would be cheaper without the display and that the recognition of the battery status, suction levels etc. works also without it. Everyone has to form their own opinion here. But I am rather Pro Display.

You can get the same information from the included app Tineco (Android, iOS). In addition, you can only view statistics (cleaning reports) about the use of the vacuum cleaner, so when and how long it was used. My personal opinion, which I have already expressed on the Roidmi F8 and Roidmi NEX: An app is not even secondary to a vacuum cleaner, it is completely unnecessary. Also the push notifications on the smartphone do not really make sense to me, at most error diagnoses & help instructions in case of malfunctions, which can also be found in the user manual.

According to our stand we have the motorized and correspondingly electric floor nozzle with us, which will be used mainly. LED lights were also installed on it, which makes it easier to see dirt and grime in darker corners. Although we already know this from the Roidmi models, it doesn’t work quite as smartly here as with Roidmi: the LED lights are switched on continuously, while the LEDs of the Roidmi battery vacuum cleaners only light up when they perceive darkness around them.

However, the Tineco has a very narrow intake opening, which means that larger pieces to be absorbed, such as larger pieces of broken glass, unfortunately do not find their way through the intake tube to the 0.6 l dust chamber. But at least no toy of the children is flushed. A rubber roller with brushes works on the underside in the floor nozzle.

A motorized nozzle in the package is not a nozzle at all, but a cleaning tool that automatically cleans the fine filter. Of all models known to us so far, the Tineco is therefore the only model that comes with this cleaning tool. With other vacuum cleaners, the filter would have to be washed out manually, in this case you place the attachment on the main element and the filter is cleaned again. Fascinating! Apart from that, the delivery includes four more attachments that we already know from other models (one of them is very flexible and good for longer distances).

Due to the fact that the battery is exchangeable and two batteries are included in the scope of delivery, it is also possible to use one battery and charge the other one during this time and then use it later. Definitely also an advantage over the Dyson V11 , where the battery is firmly installed and becomes a warranty case if there are problems with the battery. While we’re at it, let’s compare the two models in terms of features in a table – assuming, of course, that everything works as advertised in practice.

Evaluation of the Tineco S12 Plus

Thus, in the luxury class there are some comfortable extras that can be used in everyday life. Especially the automatic regulation of the suction power with the iLoop dust sensor is an exciting feature, but the filter cleaning tool also provides an explanation why we are dealing with a premium model. The LED lighting could be even smarter, but it’s nice to have with the right brightness. Also the battery power, the exchangeability of the battery and the step regulator for adjusting the suction stage are plus points, which you can expect for a model above $500. Just like the accessories and spare parts cover, which is exemplary.

Personally I would never buy a cordless vacuum cleaner in this price range, especially if you can get a Dreame V9 or a Roidmi F8 for much less money. At the end of the day, it’s all about comfort when vacuuming, but probably not to the extent that you have to pay so much for it. After all, it’s all about keeping the floor clean and the suction power of 22,000 pa is now also available in cheaper models. As a vacuum cleaner tester I am naturally euphoric about such a complete package, but realistically I would not advise anyone to buy a model above $400.

How do you see that? Is the Tineco Pure One S12 Plus exciting or just way too expensive?