0 Kommentare May 20, 2019by Tim
Hey, guys! Just a heads up: The linked offer is already a bit older and the price of the gadget might have changed or it might not be available anymore.

The Tribit XSound Go Bluetooth speaker made us curious with its very good Amazon rating (4.5 out of 5.0 stars) in 2350 reviews. Recently it has become pretty quiet around Bluetooth speakers from China, after the JKR KR – 1000 and the Tronsmart T6 no product could really convince anymore. Find out how the Tribit XSound Go performs in the test here!

The Tribit XSound Go arrived within two working days thanks to fast Amazon shipping. The packaging of the Bluetooth speaker is in the eye-catching “JBL orange” and unfortunately got a dent, but the speaker was not damaged. 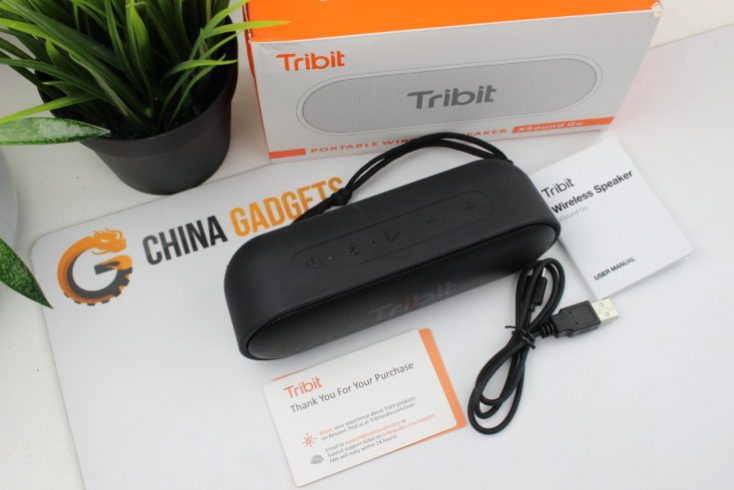 The accessories are quite tight, only a Micro-USB charging cable, a manual in English and the speaker itself are included. Unfortunately an AUX cable is not included. Too bad, this is actually standard.

The XSound Go Bluetooth speaker is unusually heavy for its dimensions of only 170 x 59 x 56 mm with 380 g. One immediately notices that the technology was installed in the most space-saving way possible. The processing and material quality leaves nothing to be desired. The rubberized plastic housing makes a stable impression and the buttons have a pleasant pressure point. 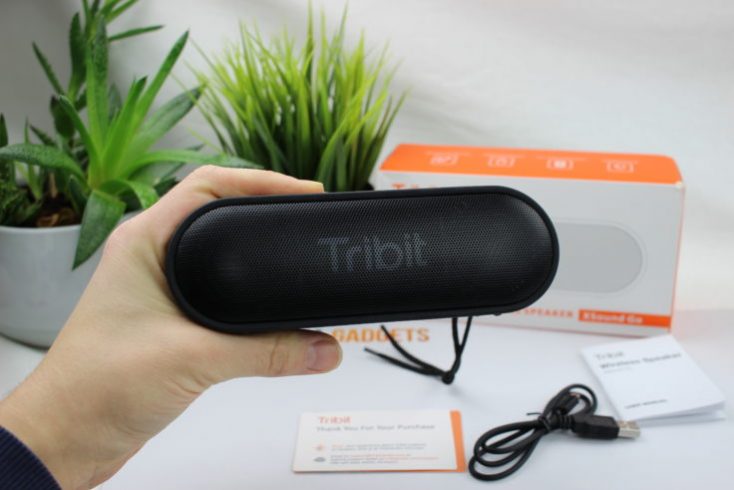 In order to obtain IPX7 certification, the housing is largely sealed and the connections are hidden behind a thick rubber cap. There are four small rubber feet on the underside that give the Tribit XSound Go a non-slip stand and absorb vibrations. 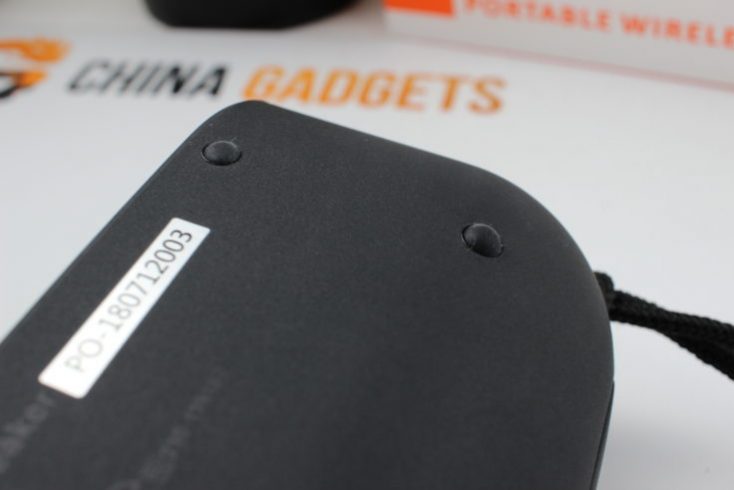 The design reminds me a bit of the Beats Pill at first glance, but is independent overall. The speaker is only available in black, so almost everybody can arrange it somehow, but a larger selection would have made me feel positive.

On the thin metal grid, which protects the drivers from damage, Tribit has immortalized its own logo in a dark grey. Due to the decent color I find this acceptable and it doesn’t bother me. All in all I am positively surprised, with this loudspeaker at least externally everything is right, also the size pleases me well. It finds a small place in almost every bag, no matter how full it is – very good!

Sound of the Tribit XSound Go

The Bluetooth speaker is equipped with 2 x 6 Watt drivers, which have a diameter of about 40 mm. In between there is the additional passive radiator, which is supposed to provide a rich low frequency. On the picture of the manufacturer it is nice to see that behind or between the drivers there is a pressure chamber, which makes the passive radiator vibrate.

I was positively surprised by the sound of the Tribit XSound Go during the tests! In relation to the small size of the speaker, I think the sound is pretty good. This is mainly due to the fact that the loudspeaker also shows a solid performance in the low frequency range, which is rather the exception with this size.

Compared to the JKR KR – 1000 and also the Tronsmart T6, the Tribit XSound Go’s tweeter is a bit more high-resolution and detailed, which I like very much. In the midrange and bass range, the significantly smaller loudspeaker can only compete to a limited extent. Here, the larger models simply offer a better stage and a more voluminous sound.

However, the two larger loudspeakers tend to overdrive in the low frequency range rather than the XSound Go. Here the hardware of the small loudspeaker seems to regulate well in order to achieve the best possible sound at any volume.

In relation to other speakers of its size, such as the Xiaomi Soundbox 2, the bass is considerable and I enjoy listening to music. If a compact design is important to you, the Tribit XSound Go makes a good compromise between size and sound quality.

The speaker is equipped with Bluetooth 4.2 and offers a good range. In the test, we had a stable Bluetooth connection within a room without any dropouts or noise. On a free surface the connection remained stable at a distance of about nine meters, in addition there were isolated dropouts. All in all, the range was as expected, there’s nothing to complain about. 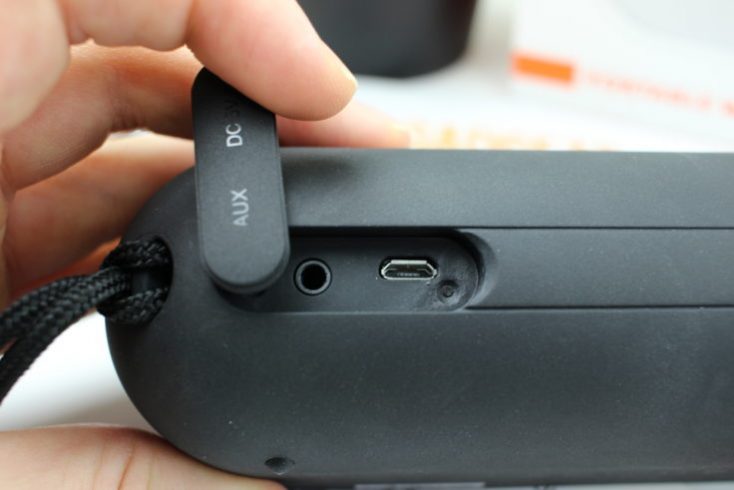 In addition to Bluetooth, the Tribit XSound Go can also be used via a jack plug. The AUX connector is located on the back behind a thick rubber cap, together with the Micro-USB charging connector. As already mentioned at the beginning there is unfortunately no AUX cable included in the scope of delivery, this has to be purchased additionally.

There are a total of five control buttons on the top of the speaker. To prevent water from penetrating through the buttons, they are rubber-coated, as are the rest of the cabinet. 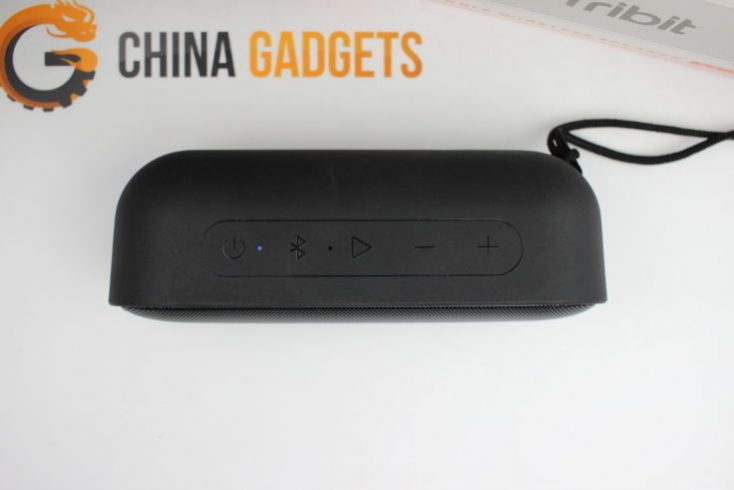 The battery of the Tribit XSound Go has a capacity of 4400 mAh, as much as the JKR KR – 1000. During the tests, the battery has achieved a surprisingly long battery life. While the JKR already runs out of juice after 4-5 hours of listening to music, the battery of the XSound Go lasted about 22 hours in the test.

According to the manufacturer, up to 24 hours are even possible, but this also depends on the music volume and the audio input used (Aux or Bluetooth). The recharging process, on the other hand, takes about 3.5 hours, but is quite long in relation to the playback time.

The IPX7 certification is intended to protect the Tribit XSound Go from water penetration during temporary immersion. In the test, it survived a 30-minute water bath without any consequential damage. Even the music continued without interruption, very good! 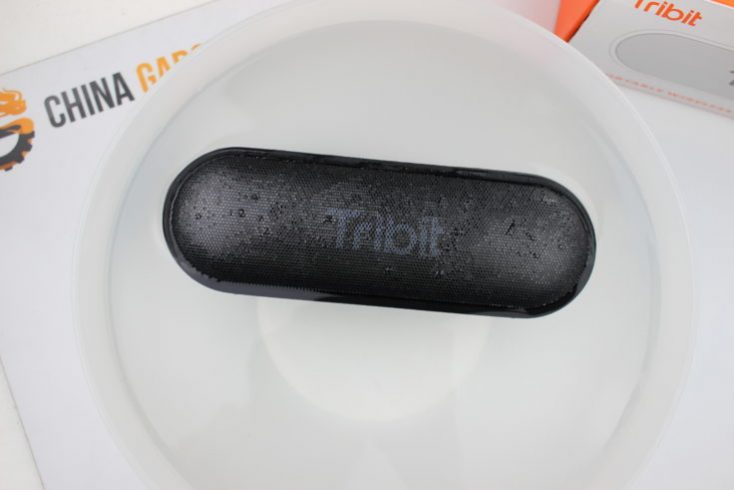 If the speaker should land in a pool or lake, it probably won’t hurt him. It is also practical that the speaker floats on the surface of the water and does not sink by itself.

In my opinion you are not doing anything wrong for the price, the price-performance ratio is right. I like the Tribit XSound Go very much, it has a wide frequency band for its size. Especially in the bass range it performs surprisingly well compared to other speakers of its size, like the Xiaomi Soundbox 2, and convinces with a solid bass that doesn’t overdrive.

If you compare it to the JKR KR – 1000 or the Tronsmart T6, you can already hear that their sound is somewhat more voluminous due to the larger cabinet. But this is not to be a criticism of the Tribit XSound Go. On the other hand, it is even a bit more high-resolution than the JKR and Tronsmart speaker.

The workmanship and the design of the small speaker are perfect, there’s nothing to complain about from my point of view. Although we are always careful with Amazon ratings (keyword: “fake ratings”) the rating of 4.5 reflects my opinion about the speaker. Due to the large number of reviews, they should also be real in the case of the Tribit XSound Go.