2 Kommentare September 27, 2019by Tim
Hey, guys! Just a heads up: The linked offer is already a bit older and the price of the gadget might have changed or it might not be available anymore.

Trifo is a blank page in the increasingly competitive household robot market. Their first model, Ironpie M6, has everything you would expect from a high-quality household robot. But the opinions are divided on the built-in camera. 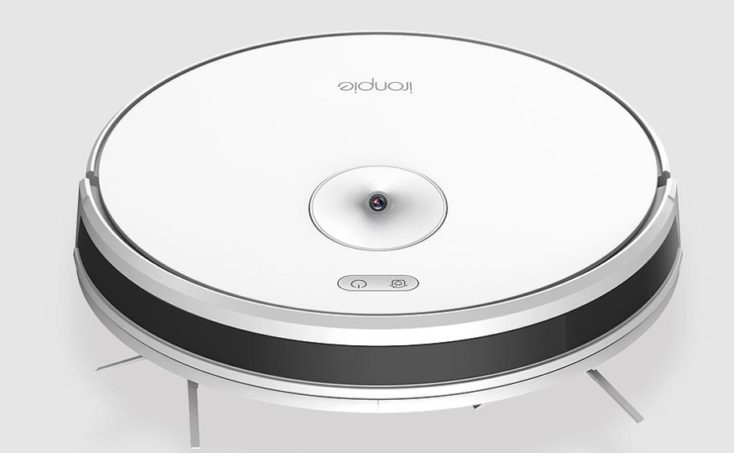 See there: The differences to the Mi Robot 1S are not gigantic, but exist. The biggest factor in the direct comparison of both models is the type of navigation. What is the difference between camera navigation and laser space measurement? What is better?

The manufacturer Trifo, which is quite unknown around here, not only wants to offer us a household helper for the four walls, but also to give us a feeling of security when we are on the move. Trifo describes the M6 as follows: “What sets the Ironpie M6 apart from the competition is the ability to make the home safer with the camera and smart app control. The built-in camera is therefore not only intended for visual navigation, but also for monitoring the four walls.

Also the activity of the domestic animals can be reconstructed in such a way. The “Trifo Home” app (Android, iOS) can be used to take a live look into the home at any time via smartphone or tablet. In addition, the suction robot can also be controlled via remote control in the app while on the move. This fact can now be seen as positive – or exactly the opposite.

Camera navigation: No longer up to date?

The Ironpie M6 works with a TIRVS vision system (Trifo Intelligent Robotics Vision System) and has a SLAM algorithm (Simultaneous Localization And Mapping) included in the software package. This enables the user to create a visual map and display it in the app despite camera navigation.

The disadvantage of camera navigation compared to laser room surveying (e.g. Roborock models) is that the vacuum robot does not scan the rooms in front of it, but orients itself to the ceiling of the apartment. The robot does this because it assumes that the ceiling has the same floor plan as the floor area.

Camera robots cannot normally work in the dark. Tests will have to show whether this also applies to the M6. In addition, the robot works from the factory in Z-Shaped mode and travels the premises in straight tracks. It does this until it encounters an obstacle, then turns around and travels the next straight path. According to the product application, he should also be able to learn new things so that he can independently optimize his routes when changes occur in his home.

Personally I find the setting of patrol routes in the app very exciting. So you can tell the Ironpie which route to “patrol” and see what’s going on underway.

The brushless DC motor (BLDC for short) inside the vacuum robot has a suction power of 1800 pa. He can boast of being at least within the range of the Xiaomi and Roborock models. On a par with the Mi Robot of the first generation, but not with the new Mi Robot 1S. In addition there is an ARMv8-A quad-core chip, but it is not specified exactly which one.

A nice feature is the carpet detection, which allows the robot to detect carpets underneath itself and increase the suction power. The card memory is also included, but (currently) only one card can be stored. This can be called up via app in the “Cleaning History”. With a little luck, Trifo’s update policy is so good that it can still be improved via a firmware update. Thus the distance to the Roborock S6 or Mi Robot 1S is given.

Otherwise, of course, the usual vacuum robot features are included: Autonomous retrieval of the charging station when the battery level drops (after a working time of 100 minutes), scheduling of working times, 0.6 l dust chamber. The dimensions of the robot should also be emphasized: with dimensions of 33 x 33 x 7.6 cm, the vacuum robot is quite flat (comparison Roborock S6: 9.9 cm height) and fits under most pieces of furniture.

The operating volume of 65 dB is a value that is neither too loud nor particularly quiet and can be represented. Especially this robot with built-in surveillance camera should work while the homeowner is on the move.

With the Ironpie M6, Trifo has a model on the market that is worth paying attention to – provided you want a robot with a camera in its four walls. In addition, there is no information about the quality of this camera, in which resolution it transmits. In comparison with the current top models, the Ironpie M6 lags a bit behind on the software side, but has been on the market a little longer than the Mi Robot 1S or Roborock S6.

In general, I find the idea of a moving surveillance camera very interesting, but any critical thought about it is also appropriate.

Or what do you think? Is the M6 worth a detailed test?