0 Kommentare September 18, 2021by Tim
Hey, guys! Just a heads up: The linked offer is already a bit older and the price of the gadget might have changed or it might not be available anymore.

With the Tronsmart Studio, a new Bluetooth speaker launches on the market today! Its design inevitably reminds us of the Bose SoundLink Mini II. But can the cheaper speaker also perform similarly in terms of sound? 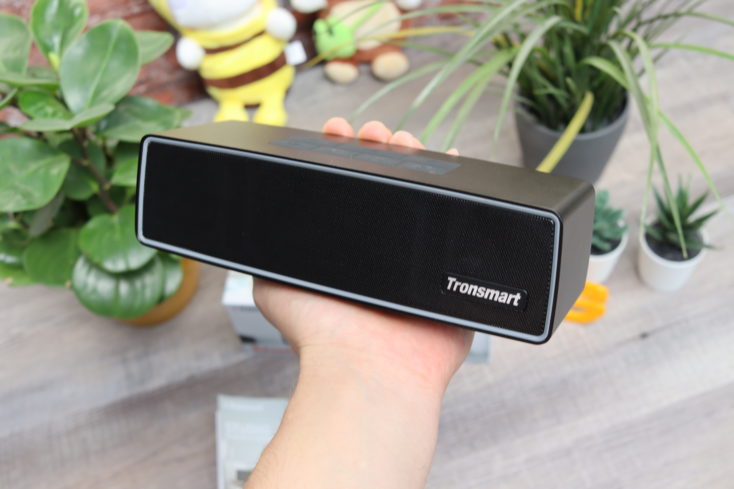 The Tronsmart Studio Bluetooth speaker comes in a well-padded box, so it survived the import from China well. 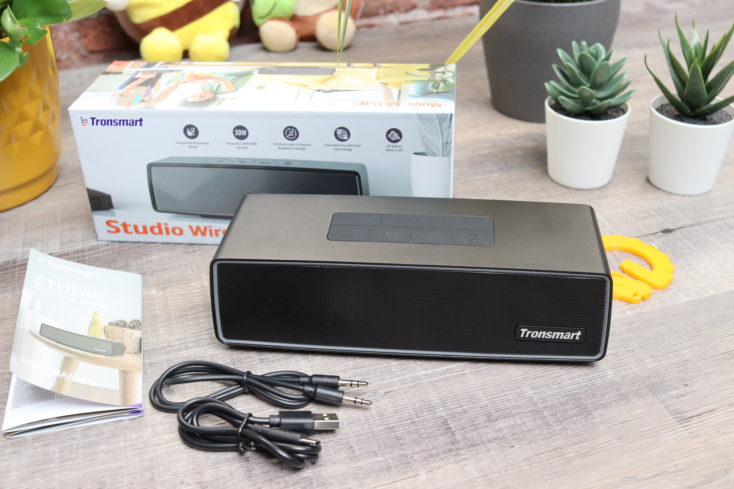 Besides the speaker itself, the accessories include a USB-C charging cable, an AUX cable, and a multilingual user manual.

Design a tribute to Bose

The design of the Tronsmart Studio was quite obviously inspired by Bose, although the Tronsmart speaker is slightly larger than its counterpart from Bose, the basic shape is very similar. 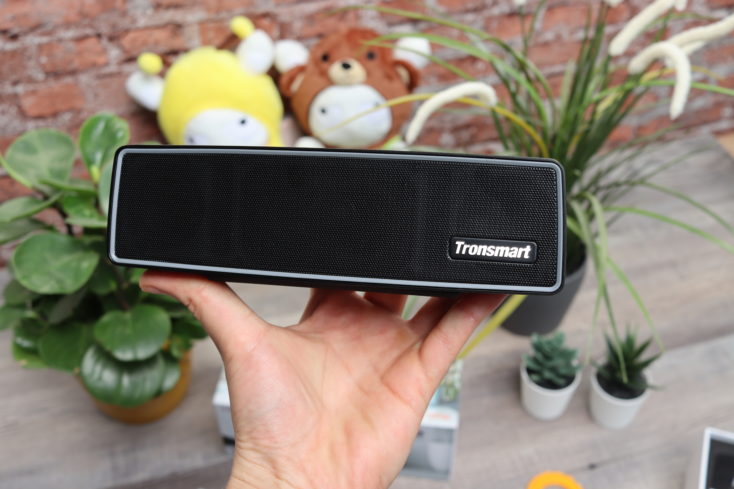 The speaker is completely black. A fine-mesh speaker grille is used on the front and back, while the sides are equipped with a metal jacket.

This gives the Tronsmart Studio an overall high-quality look. However, it is not exactly the lightest with a weight of just under one kilogram. 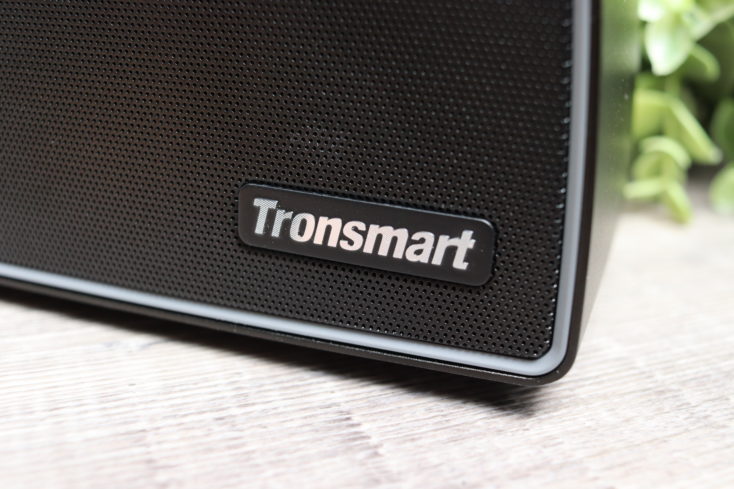 In terms of workmanship, I have nothing to criticize about the speaker. It is cleanly glued and has no material or other defects.

Compared to many other speakers, however, it lacks an IP certification, so it is not even protected against splashing water, which is probably also due to the exposed connections on the back.

Sound of the Tronsmart Studio speaker

At least on paper, the Tronsmart Studio Bluetooth Speaker is equipped with a decent “boom”. As many as three speakers and four passive radiators play the music here. The system is supposed to have a total of 30 watts of power, but Tronsmart does not reveal the distribution of this power between the two tweeters and the midrange speaker.

In the test, the Tronsmart Studio delivers a solid sound, which is a bit midrange-heavy in my opinion. The speaker does a pretty good job in the high tones, but it unfortunately sounds a bit thinner in the low tones and renders very low frequencies a bit tinny.

I like the SoundPulse mode, which can be activated via a button on the top. This gives the speaker a more spacious sound and offers a larger stage. China gadgets fans already know something similar from the JKR KR-1000, but it still offers a bit more bass in direct comparison, i.e. a richer bass.

Furthermore, I’m not sure if you can really believe the 30 watts touted by Tronsmart. Sure, the sound isn’t bad, but compared to the Soundcore Motion Boom (also 30 watts according to the manufacturer), it can’t keep up by far.

While many Bluetooth speaker manufacturers do without an SD slot in their current models and a 3.5 mm AUX port is no longer standard, the Tronsmart Studio still offers both options – very good! 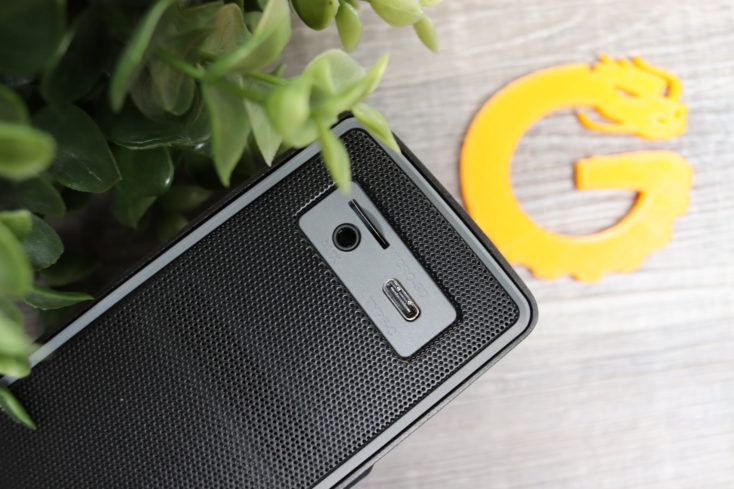 In terms of wireless connectivity, a Bluetooth 5 module is used here, but it only supports the SBC codec – a pity. At least two identical speakers can be paired as a stereo pair.

Tronsmart has installed seven rubberized buttons on the top for operating the Bluetooth speaker. Some of the buttons have double functions. 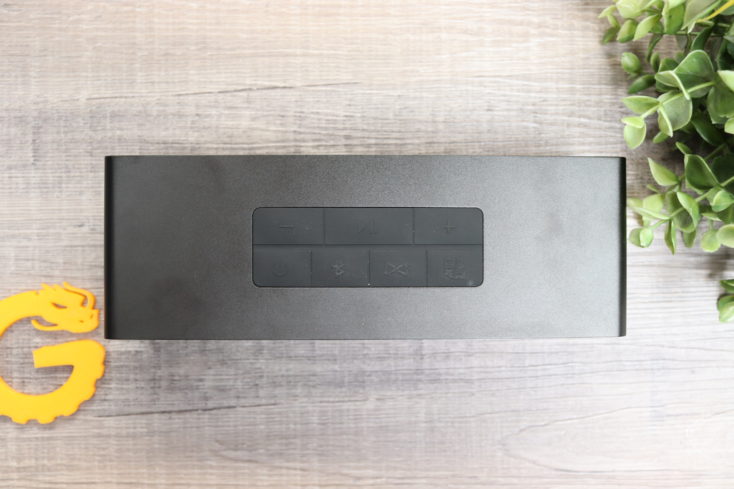 A long tap on the volume up or down button selects the next or previous track, and further combinations can be used to answer/end calls.

Inside the Tronsmart Studio are two battery cells with 2600 mAh each, so a total of 5200 mAh. With this, a runtime of up to 15 hours at medium volume should be possible.

However, the charging process of the speaker via USB-C cable only takes place at 5 watts, so the speaker needs a charging time of just under 3-3.5 hours – a bit long for my liking.

The Tronsmart Studio speaker is the first speaker after the JKR KR-1000 to offer a similar surround sound mode. However, it can unfortunately only reproduce a somewhat smaller frequency spectrum in a direct comparison.

Even though the design is similar, the speaker cannot hold a candle to the Bose Soundlink Mini II. However, the Tronsmart Studio is still chic in my opinion, and the materials used and the workmanship are also suitable.

The various connection options, which are no longer standard, are also positive.