1 Kommentare October 11, 2018by Thorben
Hey, guys! Just a heads up: The linked offer is already a bit older and the price of the gadget might have changed or it might not be available anymore.

The Tronsmart T6 Bluetooth Speaker is visually reminiscent of a mixture of UE Boom and JBL Flip 3 – but costs less than half as much and has 25 watts of output power as well as dual passive radiators for rich bass. Can the loudspeaker only keep up optically or also in terms of sound? In addition to the speaker itself, the accessories include a Micro-USB charging cable, an AUX cable and a user manual in English. Tronsmart also includes a warranty card with its products.

As already mentioned, the design of the Tronsmart T6 is partly based on that of the UE Boom or JBL Flip 3. First of all: the fabric coating of the T6 only serves optical purposes and is not water-repellent!

All in all, the Bluetooth speaker is solidly manufactured. I couldn’t find any manufacturing errors or other weak points. 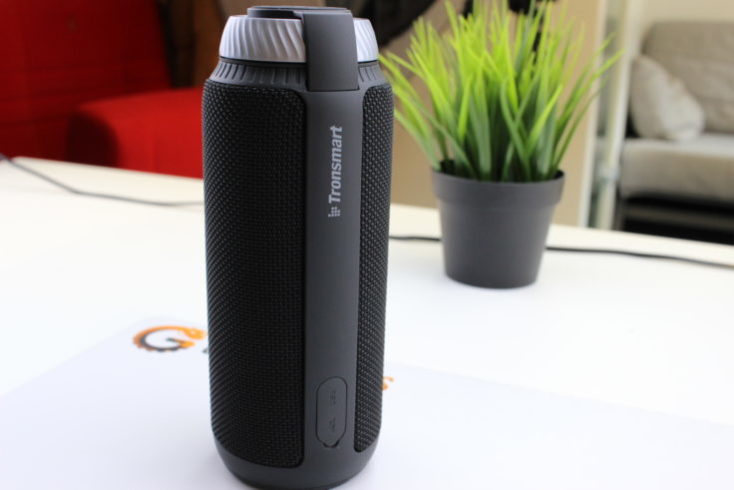 With dimensions of 75 x 75 x 195 mm, the Tronsmart T6 is slightly wider and higher than UE Boom and JBL Flip 3. The greater height is due to the Tronsmart implemented control element on the top.

The manufacturer has installed an open passive radiator in “JBL style” on the underside.

With a weight of 555.2 grams, the Bluetooth speaker, considering the built-in components and its size, is absolutely within the scope of the compatible.

Sound of the Tronsmart T6

The speaker has two 12.5 watt drivers, plus two passive radiators, one of which is installed on the underside of the speaker, as already mentioned, and the other is located underneath the fabric jacket. Tronsmart advertises with a 360° sound, which in fact isn’t 100% true, as the drivers are located on the opposite sides.

The Tronsmart T6 delivers a solid sound overall, which is absolutely fine in the price/performance ratio. In the low-frequency range, it convinces with similarly strong bass as the JKR – KR 1000. Just like this, the Tronsmart T6 also tends to overdrive slightly in the low-frequency range and reproduce bass too powerfully – a small fine adjustment in the equalizer settings helps here. The loudspeakers are similar in the tweeter and midrange range.

Due to the different concepts, however, the two are rather difficult to compare. The Tronsmart T6 delivers a less strong stereo sound due to the opposing drivers, but rather a monotonous sound, which, however, has a larger overall radius.

Compared to the Inateck BP2003, the midrange of the Tronsmart T6 sounds a bit fuller and therefore less height-accentuated – which I like very much. But the bass of the Inateck speaker is a bit more powerful and fuller.

The Bluetooth Box connectors are located under a plastic cap at the bottom of the speaker.

Here is the Micro-USB charging input and a 3.5mm jack AUX-IN.

The loudspeaker has a total of five control knobs and a rotary knob.

Since the buttons of the Tronsmart T6 are not assigned twice, the functions of the buttons can be easily identified by the respective labels.

An RGB LED ring has been installed around the control element, which reflects the current status of the Bluetooth speaker by glowing or flashing in various colours.

With a 5200 mAh battery, the Tronsmart T6 beats both the JKR KR – 1000 (4400 mAh) and the Inateck BP2003 (2000 mAh). The outdoor speakers, which usually have a higher battery capacity, such as the Anker SoundCore 2, are more likely to be among the competitors here. This is also reflected in the mileage, while the JKR KR – 1000 runs out of juice after about 4 hours, the Tronsmart T6 held out for about 9-10 hours in our test at medium volume.

In addition to the red flashing of the status LED, the loudspeaker unfortunately also signals that the battery is empty with a “low battery” voice feedback every minute. I seriously wonder who thinks up something like this. Also the JKR KR – 1000 is equipped with such a feedback and it is just annoying.

The Tronsmart T6 is a good alternative with a similar sound quality as the most popular speaker from China so far – the JKR KR – 1000. While the JKR – KR 1000 is more likely the Bluetooth box for home use, the Tronsmart T6 is in my opinion more suitable for outdoor use. Thanks to its construction, it simply sounds a larger radius and also scores with a longer battery life.

Despite the fabric sheathing, which is based on JBL or UE loudspeakers, the Tronsmart T6 unfortunately doesn’t have a water-repellent function – so the Tronsmart T6 isn’t a real outdoor speaker either.

Overall, however, the speaker is very well manufactured and delivers a solid sound within the price/performance ratio, which does not have to hide from our previous favorites from China.