17 Kommentare August 5, 2018by Alex
Hey, guys! Just a heads up: The linked offer is already a bit older and the price of the gadget might have changed or it might not be available anymore.

Ulefone has already caused a sensation this year with the Ulefone T2 Pro. While this will be the new flagship of the manufacturer, the new Ulefone Power 5 hits into a completely different notch. With a 13,000 mAh, the smartphone has the largest battery in the world and overtakes the Doogee BL12000. 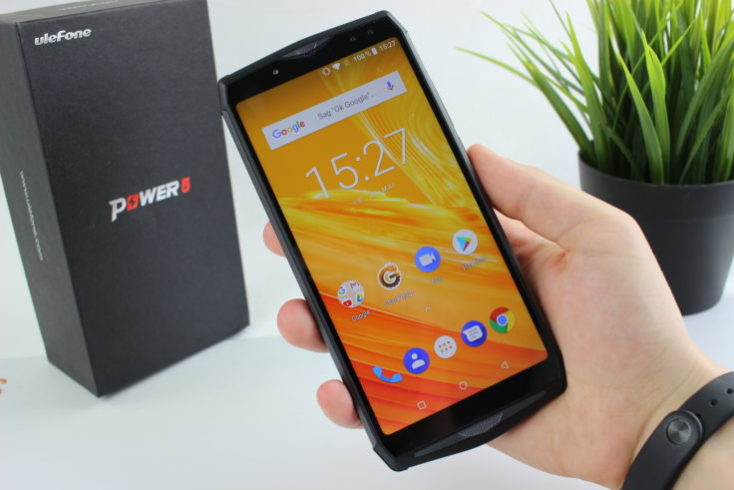 Ulefone Power 5? Didn’t they forget something? Yes, not so long ago there was the Ulefone Power 3, which also had a strong battery life. With the new 5 series you skip a generation, the manufacturer does not release a Ulefone Power 4. Here, too, it is probably due to the fact that the number 4 is considered an unlucky number in China, because OnePlus also brought the OnePlus 5 directly onto the market after the 3.

The manufacturer recently upgraded the third offshoot of the Power series with the Ulefone Power 3S. This appeared with less RAM, but with more battery capacity. The original plan was to release the new Power 5 under the name “Ulefone Power 3 Max”.

Design: Rather Blackview than Ulefone

The look of the Ulefone Power 5 is more like an outdoor smartphone and reminds us of the Blackview smartphones. This is due to the mix of metal, plastic and “artificial leather” processing. The metal elements are more on the side and also in the form of the keys. Most of the back is made of synthetic leather looking plastic, only the small area directly around the bottom of the cameras is made of metal. We have seen a similar design on the MAZE Comet, for example, but “real artificial leather” was used there. 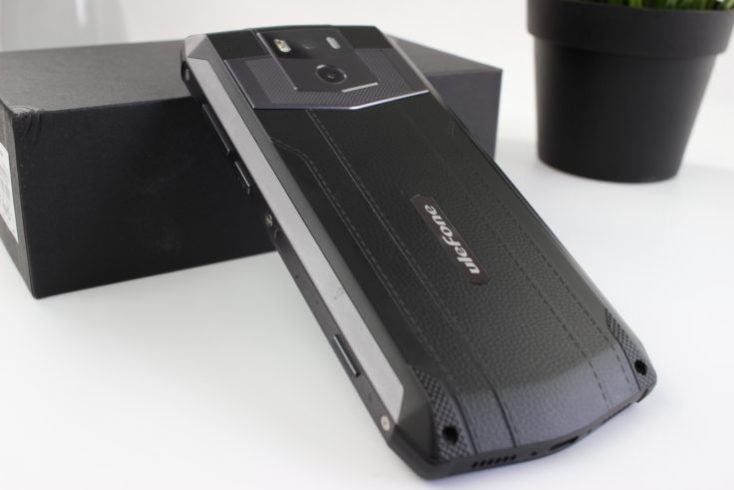 Due to the many plastic parts, the Power 5 feels a bit “cheaper” than you might think. After all, the weight of 330 g is not further increased by the omission of a lot of metal. The dimensions are also monstrous at 169.4 x 80.2 x 15.8 mm. Even my rather large OnePlus 5T is 13 mm smaller and only half as thick. This makes the Power 5 the least suitable smartphone for one-handed operation that we have tested so far. The thickness is absolutely understandable and also manageable, but the height, which is achieved by the 6 inch 18:9 display and the large edges above and below, is simply too much. But if you always have both hands on the smartphone anyway, of course this is bearable. 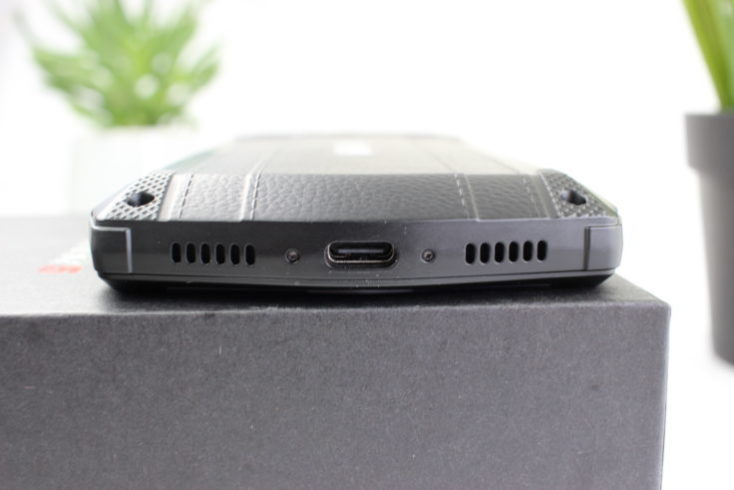 The overall workmanship is good, even if the gap dimensions are somewhat too large in some places. The keys (power, volume, shortcut) as well as the fingerprint sensor are on the right side. All are nicely textured, have a good pressure point and do not wobble. Unfortunately, you can’t say that about the hybrid SIM slot on the left side. This sits a bit too deep in the case of our model and shakes audibly when you shake the mobile phone.

Good display but too large edges

The 6-inch IPS LC display has a resolution of 2160 x 1080 pixels in 18:9 format and thus offers a pixel density of the usual and good 403 PPI. It is light, has no defects such as light or dark spots and the touch screen reacts quickly and reliably even to multitouch gestures. Only the contrast could be a little better, which was bearable for my eyes. Once the pre-installed plastic protection film has been removed, it is just as susceptible to fingerprints as other smartphones. The only really annoying things I find in a time of a Mi Mix 2S are these huge edges.

It’s not enough to just plug a large battery into a smartphone to get a long battery life. In addition to software optimizations, the right choice of processor is crucial. Ulefone remains loyal to MediaTek and uses the Helio P23 in the Power 5, which has already proven its loyalty in the Ulefone Power 3 and is a relatively energy-efficient CPU. Four of the eight ARM Cortex A53 cores operate at 2.0 GHz, the other half at 1.5 GHz.

The eight-core processor also has an impressive 6 GB of LPDDR4X memory, which is on average fast at 5 GB/s. 64 GB internal memory, on the other hand, has become standard, but can be expanded by up to 256 GB via micro-SD. Current games like PUBG Mobile run smoothly on medium level thanks to the Mali-G71 GPU, but have quite long loading times due to the not too fast memory.

Android 8.1 also finds its way onto the Ulefone Power 5 and comes with the security patch April 2018. We are therefore on a very very up-to-date software version. This is also evident in day-to-day operation. The Power 5 reacts quickly and reliably and fortunately has no bloatware (useless apps) pre-installed. If you wipe the home screen to the right you will find the Google Timeline (formerly Google Now), which hopefully shows you relevant information. If you do not want this, you can deactivate the function. There are additions in the form of gestures such as the three-finger screenshot or functions for touching the fingerprint sensor briefly or for a long time. 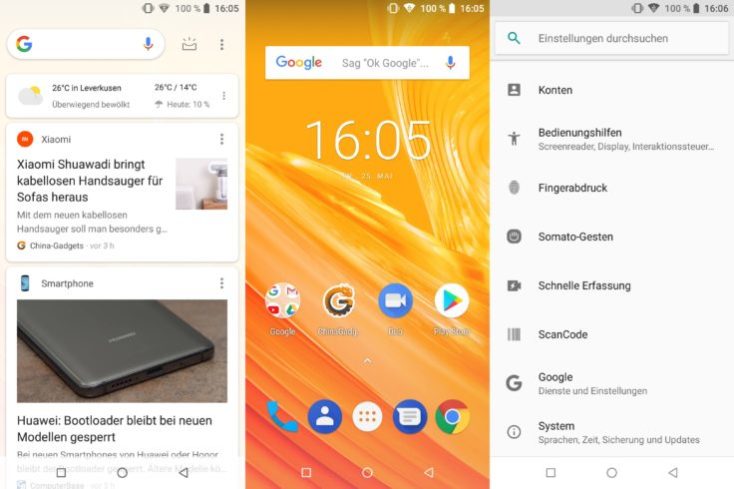 Of course the Power 5 also offers cameras, there are four in total. On the back is the Sony IMX230 sensor with 21 megapixels and a ƒ/1.8 aperture. In addition, Ulefone supposedly integrates an optical image stabilizer, which, however, is not perceptible at all in videos and therefore either does not exist or does a very bad job. There is also a 5 megapixel camera, but it doesn’t work. No matter if black and white or portrait mode, no message ever came that the secondary camera is covered – a pity!

The photos from the main camera are surprisingly good as long as you leave the camera in Auto mode. Sharpness and detail are right in decent light. But if you want to use HDR or portrait mode, the camera responds with fake bokeh, unnatural colors and a long shutter release time. Even in poorer light it gets a bit grainy in the picture. But the low-light shots are still acceptable, considering that the focus of the Power 5 was not on the camera. Compared to the Power 3, the quality of the images that such a battery monster can produce has increased significantly. 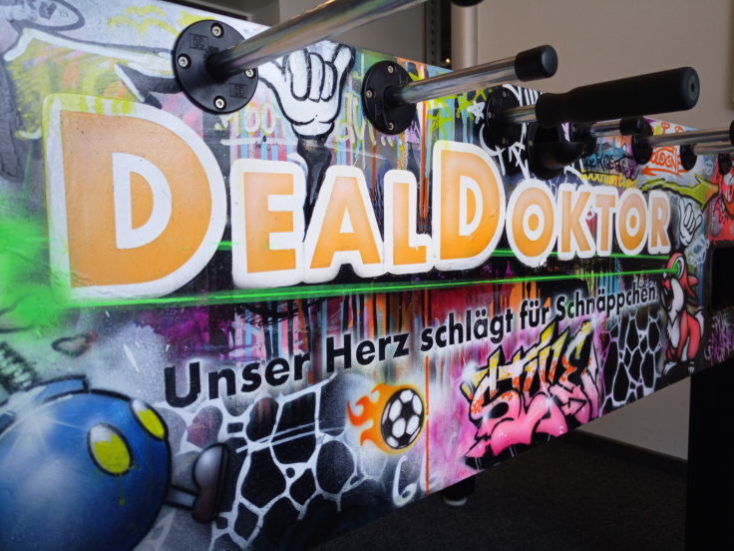 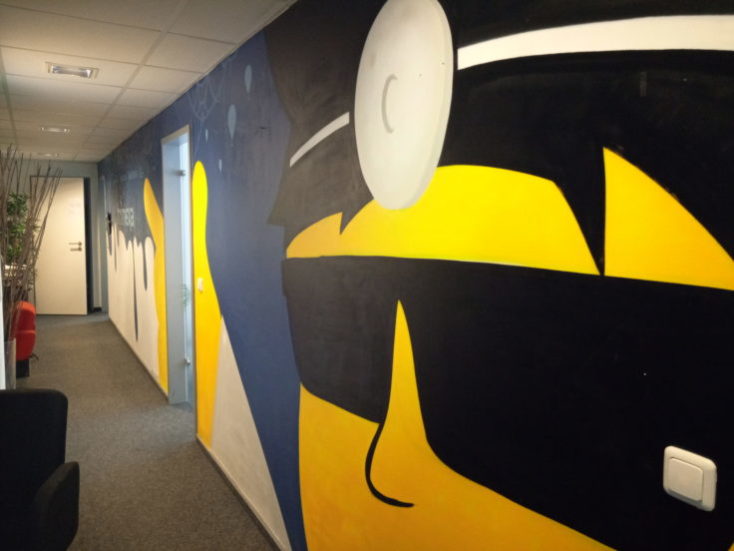 The front camera combines an 8 megapixel sensor with a 5 megapixel sensor (which at least detects when closed!) at a ƒ/2.2 aperture. This also serves to unlock the face, which works reliably and quite quickly and this time cannot be tricked with a simple photo. The selfies in good light are okay, but no real improvement over their predecessors. In poor lighting, even the front flash cannot save anything. The portrait mode and therefore also the secondary camera are unfortunately not real again. 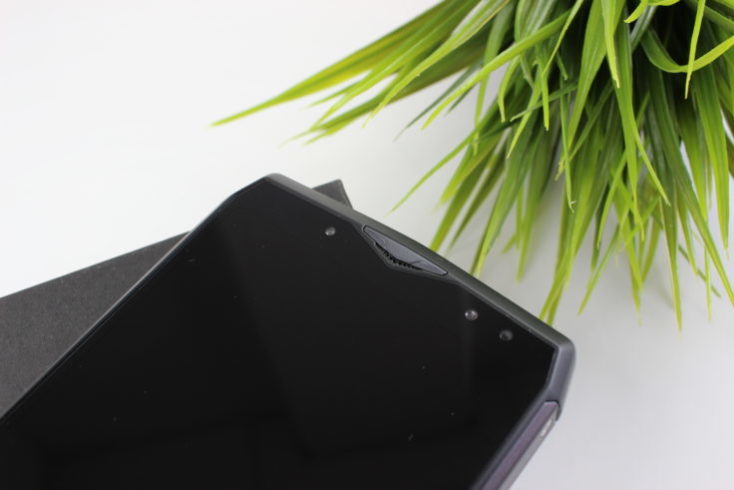 Unlike its predecessor, the manufacturer simply doubles the number of mAh and uses a 13,000 mAh battery, the largest smartphone battery currently available. So far the role has been taken by the Doogee BL12000. However, the total battery capacity is not divided into one battery, but into two batteries. Ulefone itself states that it can use the battery for a good seven days. Accordingly, you only need to charge the Power 5 once a week.

Charging the phone only takes 2.5 hours, according to Ulefone, thanks to 5V5A Fast Charge technology. In our test it was after 2.5 hours at about 85%. For the full 100% it took 3.5 hours, whereby the last percentages always charge slower than the first. After only one hour it was already at 40%, which at 13.000 mAh is 5.200 mAh and the charge is enough for more than one day.

The battery life at 50% display brightness is 28 hours and 10 minutes. If one assumes that one uses the mobile phone actively approx. 5 hours per day, one can easily get by with it five days. It’s nice to see that the battery lives up to its promise, even if better software optimization would certainly give you even more battery life. A nice feature is the possibility to charge the phone wirelessly. Since this “only” supports 10 W Qi charging, however, a full charge should take some time. Still a nice feature for easy loading in between.

The Ulefone Power 5 offers beside a large battery still further nice features. the most important LTE bands, just like Bluetooth 4.1, 802.11a/b/g/n Dual Band WiFi as well as GPS and GLONASS. The mobile phone, WLAN and GPS performance are all in good midfield. Below the fingerprint sensor on the side there is also a shortcut key, which serves as camera button and shutter button (press briefly) and button for voice recording (press long) – pretty cool, we think! 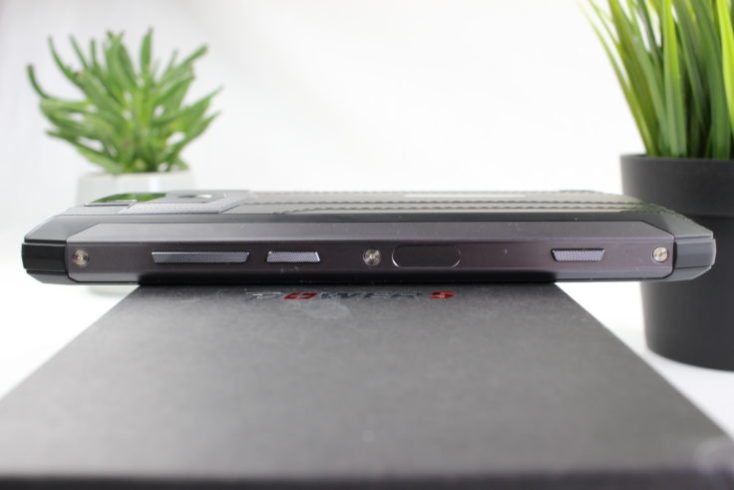 The fingerprint sensor is unusually placed on the right side, which was a good decision given the thickness of the Power 5. Once you get used to the placement, the sensor is fast enough and reliable. On the bottom you can find the USB-C connector and the mono speaker, but unfortunately no headphone jack. For this one of three adapters is included. The other two are an OTG adapter for charging other smartphones and a USB C-to-micro USB adapter. 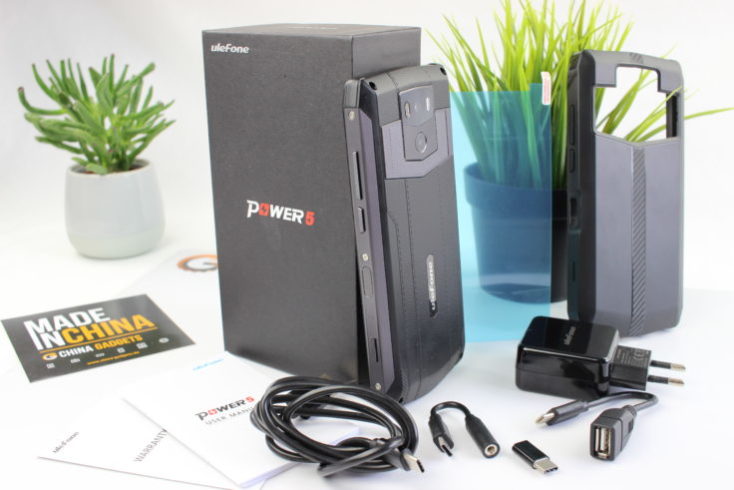 The scope of delivery is also otherwise quite luxuriant. Besides the pre-installed protective film there is a second one, a case and of course a charger and cables.

With the Power 5, Ulefone has definitely reached its goal of the largest battery with the greatest endurance tested by us. The mobile phone can also convince with a good screen, reasonably fast performance and a clean Android 8.1. Weak points are the secondary cameras and the very plastic-heavy processing. And the large battery is, of course, at the expense of design. Accordingly, the Power 5 is very bulky and very heavy. If you don’t mind, there’s a power bank that’s also a good smartphone.

What do you think of the Ulefone Power 5? Does a battery this big have to be? Do you even own a “battery monster”?