8 Kommentare March 5, 2018by Thorben
Hey, guys! Just a heads up: The linked offer is already a bit older and the price of the gadget might have changed or it might not be available anymore.

It was probably only a matter of time before the first Chinese manufacturer tried to design the current iPhone X from Apple. After the MAZE Alpha X at least already uses the name of the latest Apple mobile phone, Ulefone now takes the step that already indicated itself in November. At the MWC 2018 we could take a first look at the new Ulefone T2 Pro and were very impressed!

In our first hands-on at MWC 2018 we were fascinated by the bright and colourful display of the Ulefone T2 Pro! The Xiaomi Mi Mix 2 has recently met with such enthusiasm, because the Ulefone also scores particularly well in terms of design. It consists of a display with 19:9 aspect ratio and the striking “notch” in the upper screen area. The screen diagonal is a proud 6.7 inches and thus clearly stands out from the iPhone X. The resolution is a Full HD+ resolution with 1,080 x 2,160 pixels.

6.7 inch display size is already a strong house number, which one rarely gets to see. Even a Xiaomi Mi Max 2 with 6.44″ and a Samsung Galaxy Note 8 with 6.3″ won’t make it. The term “Phablet” fits very well. The disadvantage is of course the correspondingly higher power consumption. As you can easily see in the video, the back is made of glass. This makes the device very high-quality, but it is also very susceptible to breakage.

Even more special is the T2 Pro’s actually very rimless design. On the pictures you can see very well that except for the lower edge of the screen all edges are really very thin – damn sexy! A reference to the flagship Apple product is the silver housing frame that surrounds the T2 Pro.

New CPU for the mid-range

Ulefone has so far made a name for itself with mid-range and budget smartphones and last year adapted to the trend of rimless smartphones with the Ulefone Mix. However, the new Ulefone T2 Pro is the company’s new flagship smartphone and receives the brand-new Helio P70 processor for it. This new SoC (System on a Chip) from MediaTek has not yet been officially introduced, but the technical specifications have already been published. The eight-core processor consists of four Cortex A73 cores with 2.5 GHz clock frequency and four Cortex A53 cores with 2.0 GHz clock frequency and is manufactured in 12 nanometers. This CPU did very well in AnTuTu benchmarks and was on a level like the Kirin 960 processor, which is used in Honor 9. Also the Snapdragon 660, known from the Xiaomi Mi Note 3, should be left behind.

The final technical specifications were now revealed at the Mobile World Congress. Ulefone uses a combination of 8 GB main memory and 128 GB internal memory and thus presents itself properly! Of course, the new Helio P70 also supports 8 GB RAM, which means that you will hardly reach your limits in multitasking. A powerful processor and a very large display also consume power. Therefore, a battery with a capacity of 5,000 mAh is installed. It’s impressive that Ulefone apparently managed to design the T2 Pro so thin anyway. 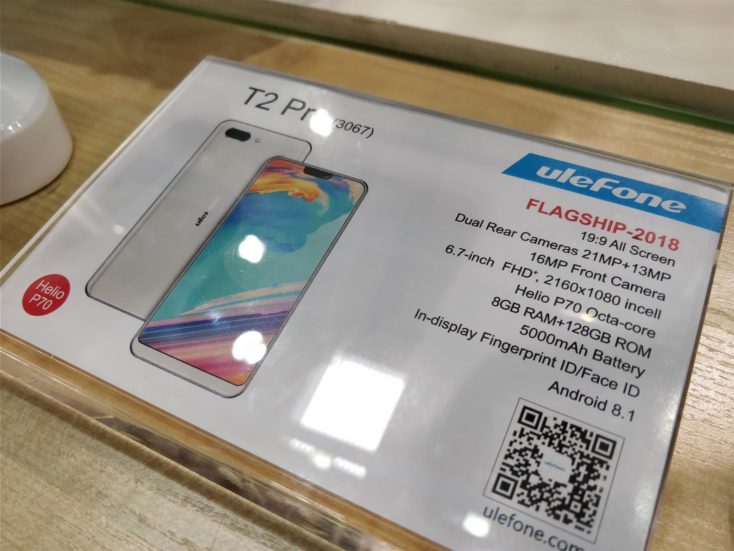 The notch is relatively small and offers space for the 16 megapixel front camera, with which Face Unlock is possible. This was already announced in advance. Unfortunately, we were not able to test how well this works. Of course, we would wish for a quality similar to that of the OnePlus 5T. A dual camera consisting of a 21 megapixel and a 13 megapixel sensor is used on the back. The two sensors are arranged horizontally and not vertically, as in the Xiaomi Redmi Note 5 Pro, for example. Unfortunately, Ulefone has not yet shone through its camera quality in our tests, so we do not expect too much at this point.

That this is a real flagship smartphone is clear by now. In addition, of course, it will be shipped with Android 8.1. In the video you can see that it is not yet installed. Besides the possibility of face unlocking, there is of course the fingerprint sensor. The Ulefone T2 Pro also integrates this in the display, as we know it from Vivo and Doogee V. With this Ulefone plays here with the very big ones and has left a visibly strong impression on us. Unfortunately Doogee was a bit further to the stand of the show; we couldn’t try the T2 Pro yet.

The Ulefone T2 Pro was definitely one, if not the surprise at this year’s MWC 18 in Barcelona. The exhibition stand was accordingly permanently occupied. This is mainly due to the design and the display with 6.7 inch diagonal. Of course it’s big and for some it’s not interesting, but this size in combination with the display quality is, at least for a China smartphone, almost unequalled and makes a Mix 2 almost fall into oblivion. The T2 Pro may occupy the throne of rimless smartphones, even if the competition doesn’t sleep either. In any case, we are very optimistic and look forward to the finished smartphone.

What do you think of the Ulefone T2 Pro? Would you get a smartphone this big?