9 Kommentare September 25, 2019by Thorben
Hey, guys! Just a heads up: The linked offer is already a bit older and the price of the gadget might have changed or it might not be available anymore.

Wow – UMIDIGI is still struggling a bit with its reputation, but with the new UMIDIGI F2 you finally seem to make a huge step forward. The successor of the UMIDIGI F1 is full of features. 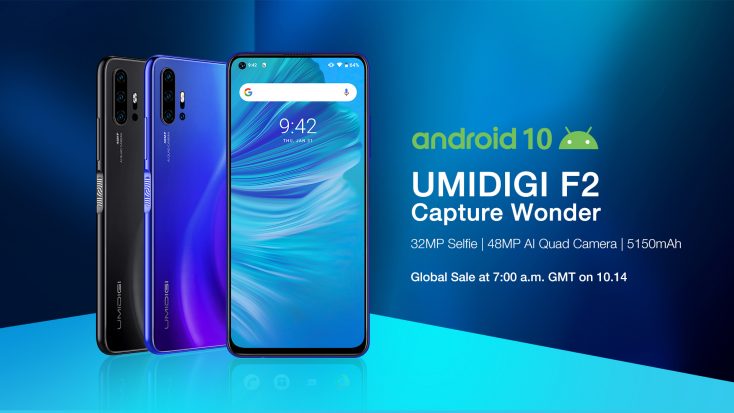 Technical data of the UMIDIGI F2

With so much room for interesting features, there was probably no room for design innovation. The UMIDIGI F2 reminds us at first glance of the Honor 20 (Pro). This is partly due to the hole punch or punch hole display, where the 32 megapixel front camera is located in the upper left corner and is virtually part of the screen. However, the diagonal of the screen is 6.53 inches and offers a Full HD+ resolution of 2340 x 1080 pixels. This is an IPS panel that appears in a 19.5:9 screen ratio. UMIDIGI calls it a FullView display. 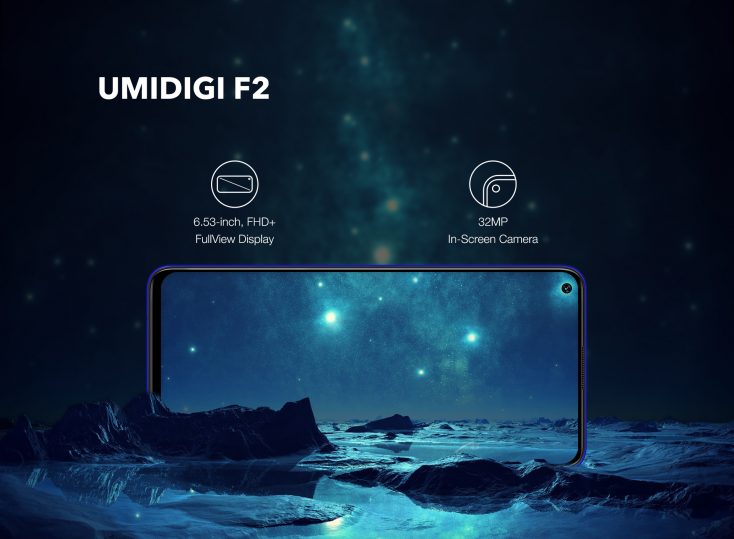 Since it is an IPS panel, no fingerprint sensor is possible in the display. The manufacturer places the fingerprint sensor on the right side, just like with the mentioned Honor 20. We find the position basically good, at least for right-handers. Even if the mobile phone looks relatively borderless, the lower edge of the screen is visibly thicker, which is standard for iPhones as well. Due to the 6.53″ diagonal, the mobile phone offers dimensions of 162.6 x 77.7 x 8.7 mm and an above-average weight of 207g. 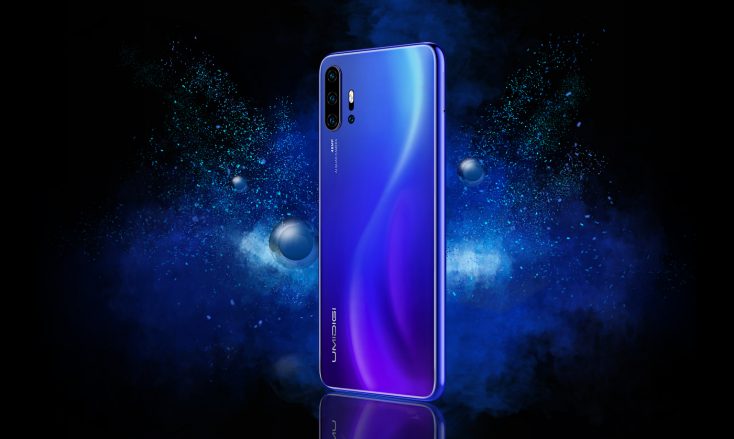 Also the back reminds us strongly of the competition. In this case, the reflective effect has been adopted almost one-to-one from Xiaomi or Realme. With the S-curve it reminds on the Realme 3 Pro, especially in the blue Colorway but also on the back of the Xiaomi Mi A3. As is also the case with these two devices, the UMIDIGI logo can also be found here vertically in the lower left corner.

As in their S3 Pro, UMIDIGI uses the MediaTek Helio P70 processor. The Octa-Core CPU has been used more often recently. No wonder, the eight cores clock up to 2.1 GHz, plus the ARM Mali G72 graphics unit with 900 MHz. A little surprise here is the memory used. While the 6 GB LPDDR4X memory is now standard, the 128 GB UFS 2.1 memory is a big surprise. The Redmi Note 8 Pro, for example, also uses this. If this is not enough for you, you can actually expand the memory. 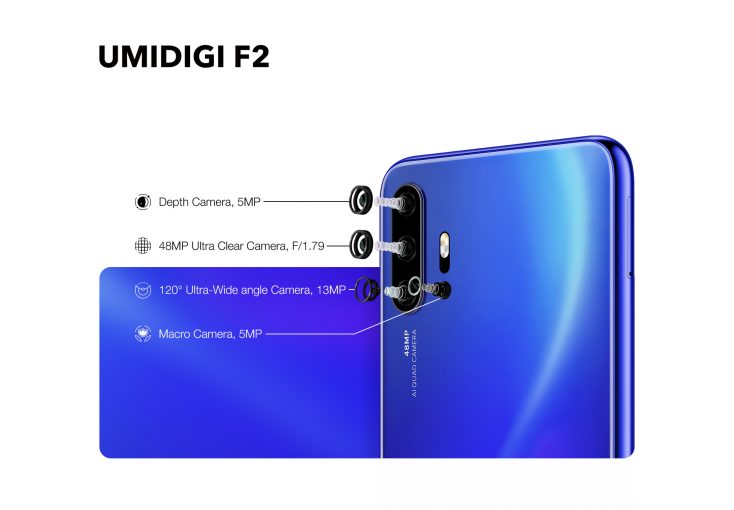 Also surprising is the quad camera, with which UMIDIGI would also like to catch up with the Redmi Note 8 Pro. The main sensor is not a 64 MP sensor, but the 48 megapixel Samsung GM-1 ISOCELL sensor, which also sits in the Redmi Note 7. The main camera with ƒ/1.79 aperture is combined with an ultra wide angle camera with a 13 megapixel resolution and a 120° shooting angle. The third camera is a macro camera, which even offers a 5 megapixel resolution. The fourth sensor is only a depth sensor, which will be used for Portait shots.

Since software optimization is not exactly one of UMIDIG’s greatest strengths, a large rechargeable battery is built in. Like its predecessor, the UMIDIGI F1, the UMIDIGI F2 also has a 5,150 mAh battery. It can even be charged quickly with 18W if you use the USB type C port on the underside. The UMIGIDI F2 is anything but stingy when it comes to connectivity standards. Dual SIM plus microSD slot, ac-WiFi, 3.5 mm jack, Bluetooth 4.2, GPS, OTG, LTE and even NFC – strong! 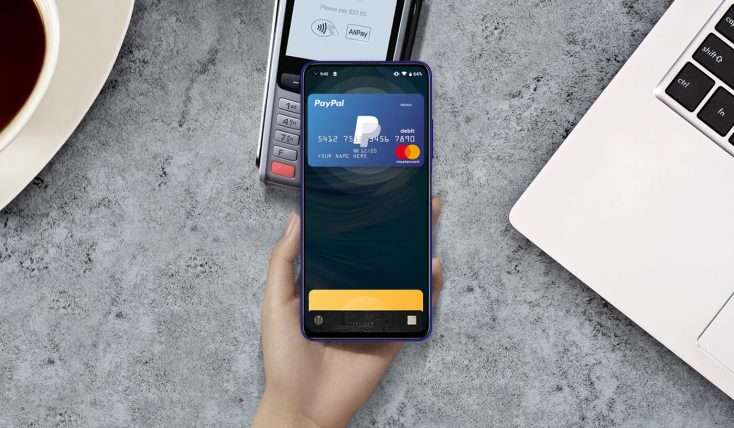 Perhaps even more surprising is the fact that the UMIDIGI F2 is to be launched directly on the market with the new Android 10 Q! This is almost in line with the very big ones, Xiaomi & Co. only come with two models earlier on the new OS. 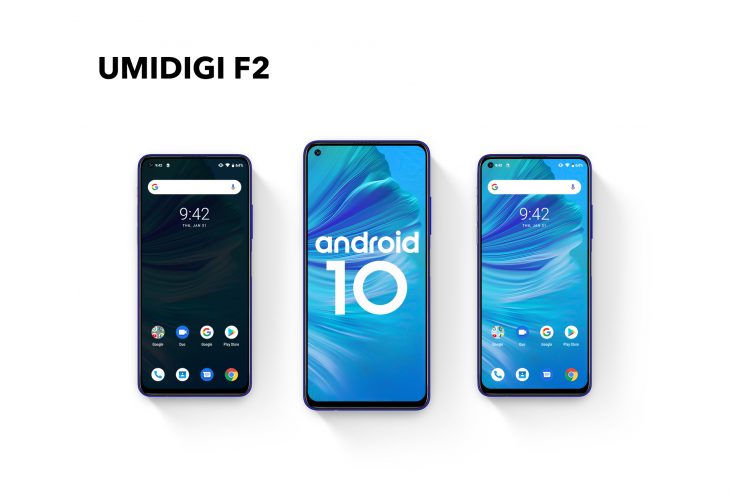 We know that some of you have had bad experiences with UMIDIGI before. But we liked the UMIDIGI F1 in the test, even if the camera still reveals weaknesses. But you have the advantage of a pretty pure Android 10, a big battery, a solid workmanship and many features. The F2 is a great addition and it’s hard to find anything great negative beforehand. We definitely want to test the UMDIGI F2, but it won’t be released until October 14th. How expensive this will be is still unclear. But we expect a price of about $300. As so often you can also participate in a giveaway, where ten winners will probably get an F2 earlier.

Would you give the UMIDIGI F2 a chance?